Ancient places are as common as copper but if any place can truly claim to be old it's the Tairuk Islands. Some say they're the first specks of dry land to rise from the ocean. Others think they fell from the sky or materialized out of the ether.
— Heinreich Klamp


The Tairuk Island chain is located off the shores of Tairos' southwestern coast just past The Serpent Lands. It consists of the big island, often just referred to as Tairuk or sometimes Big Ruk. To the southwest of Big Ruk are the Tairuk Pebbles, a cluster of broken landmasses and to the north is Far Harbor island. Nestled between Far Harbor and Big Ruk is the small yet important Skipping Stone Isle.

Big Ruk makes up the majority landmass of the Tairuk Island Chain. It is place with a reputation for mystery, danger and treasures from a time or place long beyond Tairos proper. It is here that the simple tribes of Tairuk make their living amid the dangerous flora and fauna of the island. Tribes are known to vanish or appear with little rhyme or reason. Some scholars suspect the primitive nature of these Human tribes leads to frequent fracturing, warfare and loss due to sickness. The more superstitious citizens of Far Harbor say these tribes simply appear out of the morning mist or vanish in the moonlight. Big Ruk is also home to the notoriously dangerous Titan Lizards that so thoroughly dominate this region. These diverse and often aggressive species are thought to be native only to Tairuk or wherever Tairuk came from.

Far Harbor Island is the most well known location in the island chain and the only place where a traveler might find modern comforts. The city of Far Harbor is nestled along the northeastern coast of the island and it is from here that sea ships from all across Tairos come to trade. It is also a place where those looking to never be found often end up. This remote outpost of civilization is generally considered to be lawless, treacherous and home to the finest black markets in all the land. It is also believed to be the only left in the land where a scholar may find fragments of the old Ximezci arcana as treasure hunters from this island frequently embark on expeditions into the Serpent Lands.

Just south of Far Harbor is Skipping Stone Isle. This tiny little fragment of land is the halfway point between Far Harbor and Big Ruk. It serves as a convenient place for sailors to maneuver their ships to safety during the many violent storms that plague the area. For the Big Ruk Tribes this landmass is essential for any travel between their homes and Far Harbor. Their ships are not made for the open oceans and being able to restock and rest here is of vital importance to them. It is also the tribes' launching point for raids into Far Harbor. Because of this there is often a considerable military presence in the form of hired mercenaries. They work to sweep the waters and the island of any tribes that make landfall there.

The Tairuk Pebbles are a small and uninhabited scattering of landmasses to the southwest of Big Ruk. Many scholars believe they were once a single large island roughly the size of Far Harbor but some natural or unnatural disaster led to it being broken apart. Whatever their origin these islands are home to more of the Titan Lizards and other fearsome species. To date, these islands have never been surveyed or explored by the Far Harbor Islanders. It's possible the tribes of Big Ruk have visited them no known groups have ever settled there nor spoken about them as place worth venturing to. Some sailors have said they've seen lights on the Pebbles on some nights and heard strange noises coming from the islands but there is no credible validation of these rumors. Most believe these types of stories are told just to send a shiver up the spines of newer sailors and naive mainlanders. Others say it's a malicious ruse used to entice the ill-informed out to otherwise worthless chucks of land to die.

The Tairuk Island Chain is famous for the massive lizard-like animals that dwell in the deep jungles of the region. These creatures are said to range in size from small pests to thunderous behemoths as large giants. It is also home to all manner of poisonous insects and plant life.

Timber, Fishing, Hunting Opportunities, possible deposits of valuable natural stones, metal, minerals and jewels. Many native species of plant and animal are said to have medicinal properties and/or narcotic properties 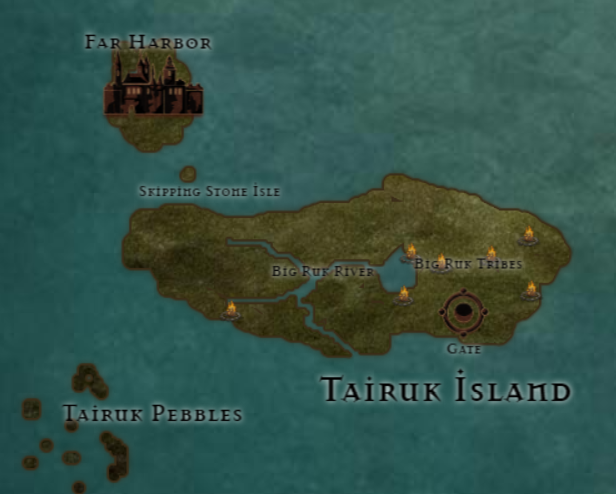 Lawless settlement known for violence, intrigue, mystery, and the promise of wealth