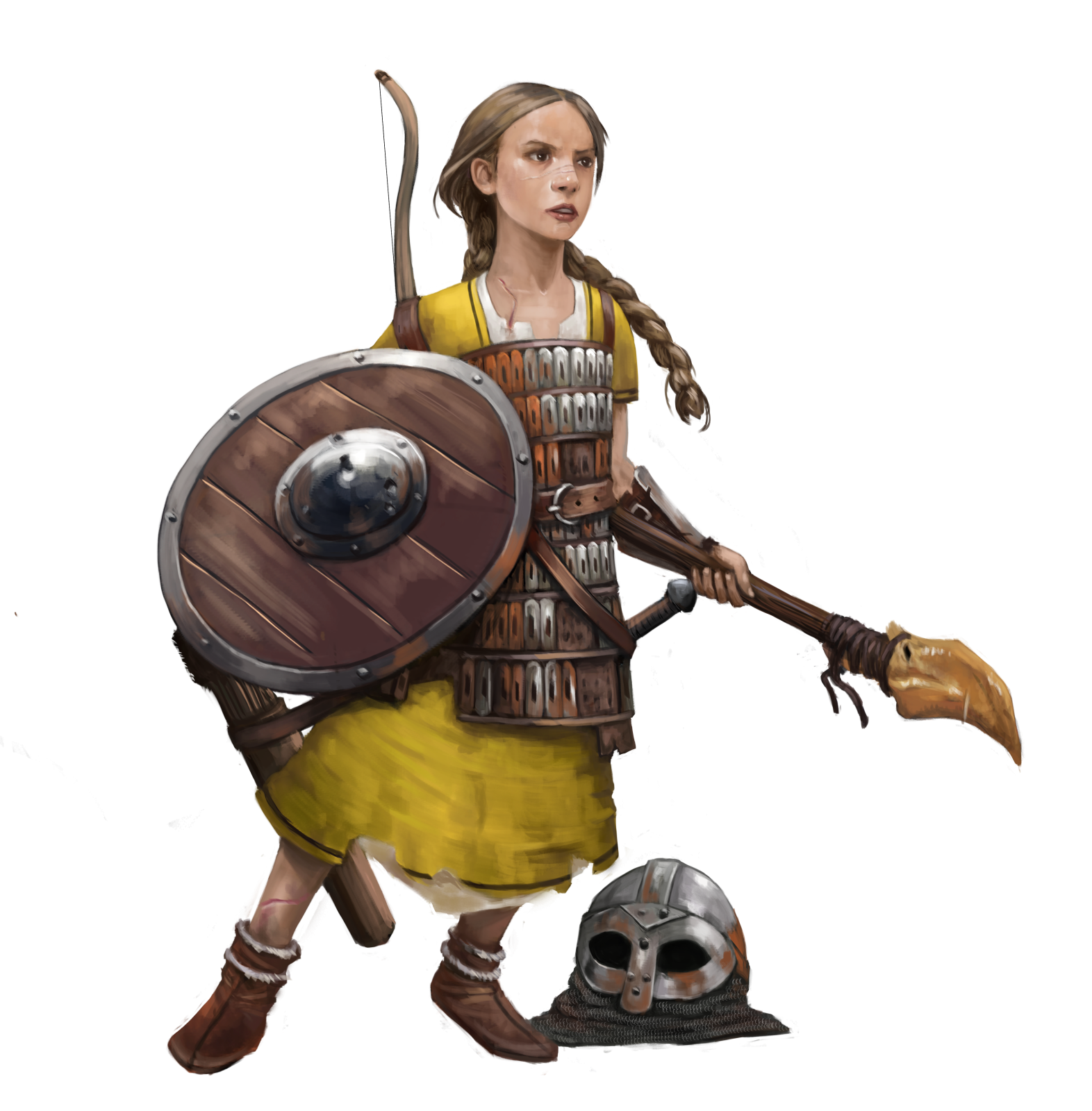 
Very little is known about young Potato and unfortunately all anyone has to go on are her grandiose tales and the tattered fragments left behind by her parents. What little fact exists comes from the children's books found in her little camp, books that her family were using to teach her to read, a goal that was never fully realized.

The books contain Frostmerite fairytales and lullabies, simple bits of history boiled down for a child's understanding, and some instructional texts on butchering game meat. However; the first clue to her origin comes from the makings of these books. The covers and binding are supremely done and the paper quality stands out above the typical parchment a simple text like this would be made from. Within the front covers of these books is a very detailed crest and bear heraldry suggestive of Frostmerian nobility.

Potato herself claims to that her mother's name was Estrid and her father's was Arne. Her parents didn't live long enough to reward her with a name at the traditional naming ceremonies common to the Frostmerite people so Potato took it upon herself to select strongest sounding word she could from all her books to be her name. She did so after killing her first Grick and turning its beak into her favorite spear. To one of the well traveled John Dodd that first met her the names reminded him of gossip he'd heard in the icy northern ports some years back. Stories about High King Rollo of Frostmere who's only child, Estrid, set out on a great journey into the oceans around Tairos and never returned. She took her husband Arne, a famous bear rider, and infant daughter along with a handful of housecarls, skalds, and trusted retainers. While its pieces do match up it was also an incredibly popular story and one that an unnamed child could easily have picked up at port and inserted herself in during the long years marooned on an island near Far Harbor. She herself has never mentioned the Bjornson name or any royal connection and seems to only know that her parents were great adventurers. And, that they had set out with a purpose; "to return a magic Keys to the dragon people before a great storm could eat up the keys for itself." as she has put it.

All she remembers of the night her parents died is the storm. An unnatural and deadly hurricane that raged unlike anything she'd seen before and that inside the storm a monster lurked. It ravaged her ship and killed everyone she loved but not before they were able to put her on a boat and offered a prayer to Grandfather Bear to protect the girl. She says after many days in the boat she crashed on the far side of Crispin Bay island and made a small camp for herself there. She lived off the land, did her best to at least learn to read a few words and sound out others, and grew to be a very competent hunter over her four years on the island.

Yet, above all that one task stood above all the others. Completing what her parents began. Their daughter was not the only treasure they loaded into the row boat before placing it in the hands of Grandfather Bear. They gave her The Time Key as well. Now; Potato travels with the Crew of the Paradise Lost, hoping their strange adventures will take them to wherever her parents were hoping to go and that she can fulfill their destiny and give them the rest they deserve.

Her Grick-Beak spear is always with her

Potato learned everything she knows either from the early teachings of her mother and father or from her time in the deep jungles on Crispin Bay Island. Her parent's boat was crewed by both Frostmerites and adventurers from across Tairos so she was able to pick up The Common Tongue as well as her native language. However; she's only able to read a handful of words in Frostmerite and none in the common tongue.

Killing many Grick on her own. Keeping the magic key safe all these years

Potato is deeply afraid of storms. She reacts by putting on the bravest face possible in front of her new companions but if no one were watching she's find some small place to crawl into and hide

Honor. At least so much as she is able to understand it. She knows her people used to follow codes of conduct centered around personal honor and clan glory. She does not have a firm grasp on what those are exactly but assumes it has something to do with what was in the fairytales her mother told her. Protecting the weak, fighting terrible monsters, and completing legendary quests.

Completing the quest her parents began. She has a deep sense of love for these people she can barely remember and to her, finishing what they started is the only way she knows how to show them how much they meant to her.

When it comes to survival Potato is an expert when comes to the tropical riggers of the region. She is also an excellent hunter, trapper, and furrier.

Potato sees bathing as something to do only when necessary such as removing parasites or cleaning off other scents before a hunt. She's generally pretty smelly otherwise.

Teaching John Dodd and Patchina Copernicus about Frostmerites, heroics, and quests (as best as she knows them) are her current favorite hobby. Second is sneaking around the ship and spying on her crew mates

Potato had a pretty health pile of collected gold and jewels that she'd found over her four years alone but gave it all to Kazim Musharif to buy her way into the crew and to earn his promise that she could go on any missions with them that she wanted. Kazim reluctantly agreed despite knowing that the last orphan in their care died on the first mission.
Alignment
Lawful Good
Current Location
Tairuk Island Chain
Currently Boarded Vehicle
The Paradise Lost
Species
Humanity
Ethnicity
Frostmerites
Honorary & Occupational Titles
Maybe the heir to the crown of Frostmere?
Age
10
Children
Presented Sex
Female
Quotes & Catchphrases
Aligned Organization
Crew of the Paradise Lost
Known Languages
Common and Frostmerite
Character Prototype
Very much inspired by a character of the same name from stop-motion animators and toy reviewers at Moonshine Animation. Please enjoy their stuff if you love toys, comedy, and a very well done post-apocalyptic setting of their own make.
https://www.youtube.com/user/MoonshineAnimations
Non-Player Characters