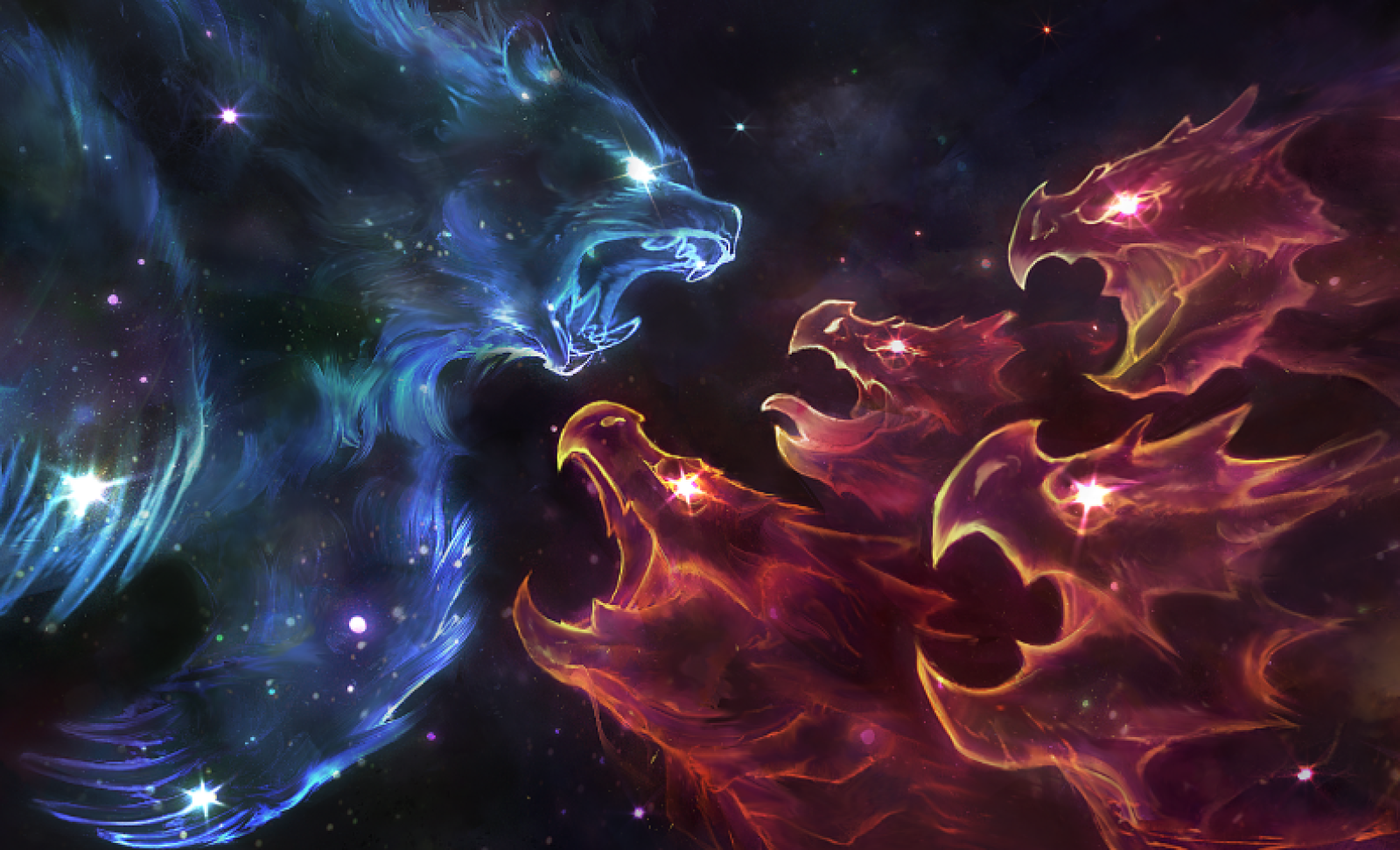 Tairos doesn't need the gods to come back. There's not a disaster in the history of land that the gods prevented. The totems spirits are the ones that have always picked up the pieces. This time, they need our help and if we turn away and say no than who's left to put our homes back together? Who's left to care; to see that there's even a future at all for us?
— Thrace


In the simplest terms there are two sides to the guardian spirits that inhabit the land. Those that represent the cycle of renewal and balance, and those that harvest and hunger. These two aspects are supposed to work in tandem, culling the land only to breath fresh life back into it. By their hand natural evolution is allowed to take place while supernatural threats to that cycle are warded against. With The Queen's Rebuke something went deeply wrong and the system is now broken.

The damage done to the land threatened the very existence of its protector spirits and the cycle of renewal they all had embraced. The trauma the Leylines suffered was poisoning magic and slowly cutting them off from the Tairos. And as their connection dwindled dangerous new entities were ravaging nature. Undead hoards left unchecked, the ravenous harvesting of August Dougal-The Pallid King, dangerous stirrings from the Bitter Depths and countless other threats were pushing Tairos ever closer to a tipping point from which there would be no recovery. Most of the totem spirits worked tirelessly in their own way to purge these threats and halt the flow of poisoned mana from the Leylines or clean up places infected by it.

However, some of the spirits chose a different path. One offered to them by whispers from the long darkness within the damaged leylines. A spirit that had long been cast out by the totems even before the rise of Skyrir. Grandmother Hydra, the Corrupter. Once trapped within a web woven of inescapable mana deep within the leylines by the other totems, now her influence was slowly seeping back into the land along with age old message. How can you claim to protect a tree if you will not taste its fruits nor prune its branches?

This was a tempting message when she first touched the world but now, in what seems like its final days, her seed took root in the hearts of many spirits. Why should they not take a more direct hand in the evolution of their land and why should they not be allowed to indulge in the fruits of their labor. The Gods had taken whatever they wanted at the height of their power and gave nothing to the land in return. Most totem spirits rejected Grandmother's honeyed words as they had in the past but for some, the question could not be ignored and the answer no longer refused. To the rest of the totems these breakaway spirits who flocked to the coils of Hydra became known as the Corrupted Ones.

Now, under the guidance of Grandfather Bear, the remaining totems spirits of balance must continue to try and restore the land.They fight against the poison slowly trickling in and confront supernatural threats all while battling their former brothers and sisters in the service of Hydra.


Prominent Members of the Totem Spirits of Balance


Below are just the most notable spirits in the family of balance. There are countless entities that fill the roster of Balance Spirits, many known and many others yet to be discovered by Tairos' druids and rangers. This is by no means an exhaustive list.

Grandfather Bear
-Head of the family of balance. This spirit favors those who are calm, thoughtful, and measured in their approach yet are able to to unleash an unmatched fury when required. He is the greatest enemy of the Corrupted Ones and seeks to find a way to brig them back into the fold. Each of them held important roles, each was family, and each was loved.
Auntie Weaver
- This totem favors cunning and intelligence above all. She teaches her followers to mend the world and to outsmart their enemies. She is also reclusive, resentful, and deeply jealous of Grandfather Bear's position.
Brother Wolf
- Hunter, tracker, and relentless enemy of the Corrupted Ones. Brother Wolf is a totem of the hunt who stresses the importance of cooperation, strong leadership, and protection of one's home. To many of nature's greatest warriors and rangers he is the patron spirit they most often look to for guidance, especially if their prey is spawn of the Corrupted Ones.
Glitterwing the Butterfly
- This young, charismatic, and trusting spirit is a patron of levity. She seeks to sooth, to sing, and to bring peace where there is only death. Glimmerwing has the most interaction with the Corrupted Ones for she believes they can be won over by showing them the love and kindness they've since forgotten.
Mammoth Queen, She Who Thunders
- Mammoth is a proud, noble spirit who tramples corruption beneath her powerful feet. This spirit, much like Bear, favors those who are able to unleash their fury only when required. She also favors family, unity, and protecting the young. Unlike Bear, she believes the Corrupted Ones are lost and she could be put down rather than swayed back into the family. In this, her stubborn and stern nature also shows through.
Dragon Fly, the Witch Doctor
- Many believe that during the first war against Hydra the Dragon Fly was exposed to some grim truth about Grandmother and the greater nature of reality and that it drove him mad. This is an eccentric spirit that is often difficult to understand and inconsistent when called upon. He favors those that make wise use of the land, who are seekers of knowledge, fearless in the pursuit of truth, and who embrace magic. Many who choose to follow this totem are as bizarre as the spirit they hold dear.
Brother Falcon
- Few exemplify what it means to be a guardian more than Brother Falcon. He is a relentless watchman who favors vigilance and those with unshakable virtue. While he is a valued asset to the totem spirits many find his unbending adherence to his own sense of honor to be stifling. He demands this same morality from those that would follow him and wishes the intelligent races of Tairos were made of sterner stuff when it comes to their values or courage.
Boss Crab
- Taskmaster. Engineer. Architect. Boss Crab is the paragon of a small sect of totems who believe that nature can be shaped to better resist corruption and outside threats. He, like Beaver, Mole, Snail, Woodpecker and others push their kin and their followers to find ways to meld civilization and nature into a harmonious hybrid. Some see merit in their ideals. Others think he teeters on the edge of Hydra's grasp.
Brother Croatoan, The Turtle
- Many of the totems believe the hardships of this new era must be fought against, tooth and claw. Croatoan thinks that the battle itself, regardless of winners and losers, will be the thing that tips Tairos over the edge and into oblivion. He is stalwart keeper of peace who teaches the virtues of enduring the storm rather that diving into it. He is a collector of great wisdom, of secrets, and a practitioner of magic who desires the same in those that follow him.
Sister Horse
This is a spirit of strength, stamina, and progress. She is a strong believer in nature's cooperation with the intelligent races and in finding new ways to combat old threats. She expects her followers to be open minded, confident, and willing to trust. Horse was once one of the most powerful totems. An ancient race known as the centaurs universally embraced her but the golden age for this totem would not last. Her people were purged to the last by The Empire of Skyrir. This has also driven her to host a deep hatred for the Undead and for Necromancy.

Grandfather Bear is the strongest spirit in the family of balance. He watches over the totems, protects them, directs their efforts, and keeps the rivalries among his kin from tearing them apart. Old Father Whale was the previous alpha spirit of this pantheon but he turned over the mantle of leadership to Bear after suffering mortal wounds against Hydra when they first imprisoned her. He returned to the depths of the oceans where he likely succumbed to his wounds. Auntie Weaver, the spider, has long believed she should rule instead of Bear for it was she who wove the webs that bound Hydra. While she favors the ideals of balance over Hydra's promise of hunger fulfilled it would not bother her if Bear perished in the struggle.

Protect the cycle of rebirth within nature and ensure life everlasting

The totems do not have an organized priesthood or even worship. Instead, they try to lead by example and reward those who do the same. Their ears are always open to those in need. Often, those they've helped will go on to help further the cause of the totems. This is as close as they come to true priests.

Many nature worshipers such as rangers and druids will often call upon totems for power or seek out their wisdom but it is not true worship. To these practitioners it is rare to worship only a single totem but instead to see them all as part of a greater whole. In fact, the only modern people who embrace a singular totem are the Frostmerites. Some goblinoid tribes do favor single totems as did the now-extinct Centaurs.

Lone warriors may adopt singular totems as well. They look at them almost like patron saints who protect their efforts. Outside of Frostmerite Skalds and Gothi most shamans, druids and rangers will favor the totems as a whole.