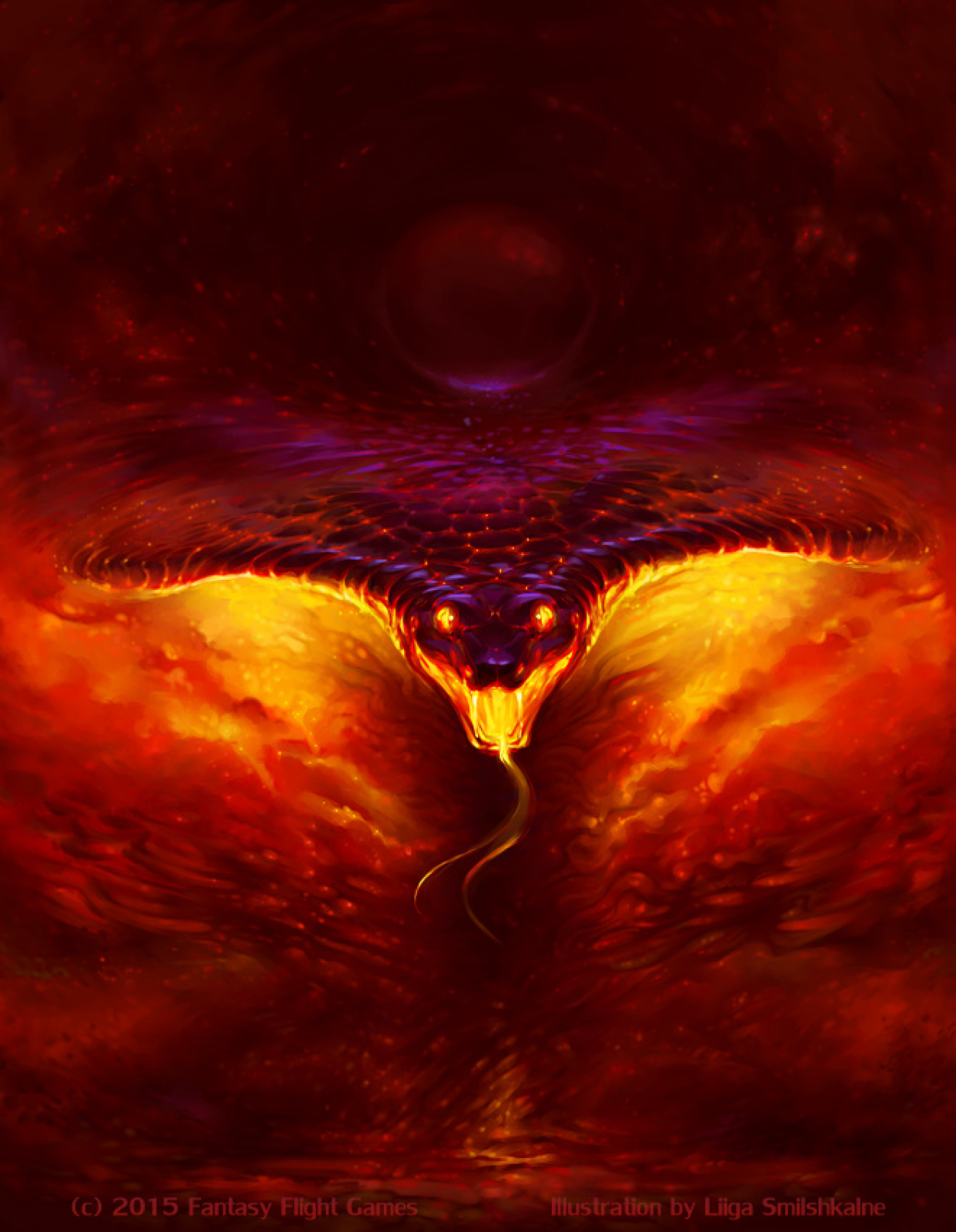 The jungles south of Melanthris are a place of long forgotten legends. Here, beneath the canopy of tangled trees and relentless rainstorms, the Concordance was forged in the crucible war.

Today, it is a place far from all the surviving nations where no one but fugitives and madmen would dare travel. The lost treasures and abandoned places usually call to explorers and adventure seekers alike from all across Tairos. The possibility of unearthing fragments of the past offers an irresistible lure to such heroes. That is not true for the Serpent lands… no such intrepid inspiration comes from here. This is a place that offers nothing but dread and damnation to any foolish enough to set foot here.

The true length of Tairos’ history is difficult to measure but what is known is that the first record of civilization and language comes not from Melanthris but the jungles of the Serpent Lands. Before The Serpent People, the continent was a place of nomadic and primitive tribes who lived off the land and worshipped nature. We only know this because these early people were watched by and preyed upon by the Ximezci, the Serpent People.

Centuries before the elven tribes began to began seeking each other out the Ximezci had mastered their own written language, known today as Balespeech. They erected vast and terrifying basalt cities dedicated to their dark god, Traveler The Mask of Oblivion and his divine scion, Sessin’yek. The native names for these cities are lost to time but scholarly translations remain- Frigid Chain, Jagged Spur, Hollow Hope and Crown of Agony. As the elves and dwarves slowly grasped at the simplest of magic Sessin’yek had long ago taught his children to call upon the gifts of Infernalism and the maddening secrets of The Traveler.


The Ximezci came from another world or another plane of existence. They were claimed by Oblivion, repurposed rather than erased. Powerful diviners and oracles who sought to know the origin of this terrible nation have managed to pull only a few fragments of truth from the ether when it comes to the Ximezci. They were created by god whose name is now lost. Oblivion whispered to them, convinced them to help murder their creator and end their world and in return, it offered them a timeless cycle of rebirth into new worlds for the purpose of ending them as well. Worlds would die and they would be absorbed into the void. And then, when a new creation was found that needed to end they would be born there, restart their civilization and bring about collapse again. It's unknown how many worlds the Ximezci would herald Oblivion to but certain patterns were always the same. The resurrection of their temple-cities is one such pattern.
Frigid Chain is always the first to be conjured from the memory of Oblivion. It acts as the metaphysical anchor that supports the rebirth of the other cities. Each and every stone of these cities is unnatural to the environment they appear on and without some source of power to sustain them the cities would wither and fade back into nothingness. Frigid Chain is modest and small compared to the other cities that follow so that all of its resources can be directed to corrupting the land and making it stable for the temples that follow. Once the region is fully saturated with Oblivion energy the city's purpose switches to breeding. All Ximezci of any particular iteration can trace their lineage to the founding generations from Frigid Chain.

The next city to be dragged out of Oblivion is always Jagged Spur. This city is always summoned nearest to the edge of what the Ximezci anticipate their borders to be. From here the Serpents will begin their probing of the world. Scouts invade the land, searching for threats and sapient species. Specimens are brought back to Jagged Spur to be vivisected, codexed and catalogued. Once they understand the lay of the land Jagged Spur then becomes the city responsible for infiltration of the enemies they've found. Arcane experiments are conducted all with the purpose of masking the true nature of Serpent spies so that they can access humanoid cities unnoticed. Individuals may be born with chameleon-like traits or humanoid forms with the minds of Ximezci may be crafted or any other nightmare that their wicked intellect can conceive.

Third, comes Hollow Hope. The purpose of this reclusively placed and well-hidden city can best be described and industry. Yet, that would not truly do justice to the abominations churned out by this temple-city. With Frigid Chain birthing Ximezci and Jagged Spur identifying and infiltrating the enemy it falls to the third city to engineer the weapons of war that will lead to a world's downfall. While each city is capable of crafting melee and ranged weapons on their own Hollow Hope's purpose is magical items and infernal beasts. Unlike traditional magi of other races who create unique items based on their own genius, the priests of this temple are dredging the entropic memories of Oblivion for items consumed during the death of their homeworlds. Then, when something stable is found they pull this hollow shadow from the void and craft it into something usable by their warriors and battle wizards. Because much of what made these concepts complete has long-since been corroded items here rarely last long and often do not live up to the power of their original versions. They do not need to. Where one powerful wand may have existed ages ago, dozens or even hundreds of watered-down versions can be pulled forth over and over again until the memory of that wand is fully consumed by Oblivion.

If the final city is called forth it means their work is succeeding and end is near. Crown of Agony is what many would consider the capital city of the Ximezci. In truth, it is their greatest weapon. The tall spires, ziggurats and opulent towers all work in unison as a single device with a single purpose, to open all the gates of a world and turn the network into an arcane chime that calls into the void, beckoning into Oblivion for The Traveler... leading him to the world they've subjugated so that it may be consumed and the entire process restarted on another world. This grand ritual was known as The Revelation and it was an extremely fragile affair that required the work of the other cities to be flawlessly executed. The Ximezci believed that Crown of Agony would one day serve as the observatory from which they would watch the final bit of creation be swallowed up. They would enjoy the eternal silence they helped to build before they too would be claimed. Crown of Agony would be the last city and they the last to bear witness.

The Fang Crusades and the Fall of the Serpents

With Crown of Agony's arrival, the Revelation had begun. It was the early stages of this apocalyptic endeavor that the colleges of magic felt. When the gates keyed into Oblivion it sent a cold shiver along the Leylines of Tairos and immediately the elves took action against this previously unknown threat. Members of the school of conjuration and evocation realized that by linking the gates the Serpents would effectively create a single swirling tempest of destruction centered above Tairos. To the Serpents, this rent in reality, would be the grand gateway the Traveler would emerge from. To the rest of Tairos it was nothing short of a cataclysmic leak from which untold amounts of death-energy would pour forth and suffocate the land.

This single event would lead to the unification of the other races and the birth of the Concordance. Eventually, with the aide of every race and the sacrifice of countless souls, temple-city after temple-city would fall. When the Herald of Oblivion, Sessin'yek was cast back into Oblivion the Revelation failed for the first time. The backlash of entropy is believed to have wiped away the memory of the Ximezci from Oblivion's depths and ended their threat permanently.

Current State of the Serpent Lands

Today, while the region is technically claimed by Melanthris and under the watchful eye of their army it is effectively ungoverned and off limits to all. The only other nearby cities are Far Harbor and Baradrad. The citizens of the lawless city of Far Harbor frequently make trips into the depths of the jungles here hoping to find the treasure left behind from the Fang Crusades. More often than not these intrepid individuals never return from their ventures. The Baradradi have no interest in the Serpent Lands. The magic used by the Ximezci is steeped in the kind of entropic energy that they actively forbid. It's speculated that Baradrad's neighbor, Skyrir, would be delighted to gain access to the old ruins of Hollow Hope and Crown of Agony. Baradrad has thus far prevented them crossing into the jungles.

Unknown, believed to be no permanent settlements in the area

Each of the four temple-cities had their own traditions, purposes and individual goals that all worked toward the single greater purpose of the Traveler

Ximezci architecture is stepped and blockish but known for its intricate sculptures, symbols and runes carved into the stone of their buildings. It's believed that no single version of their cities is ever exactly the same. The layout and detail warp with each iteration.

RUINED SETTLEMENT
At the conclusion of the Fang Crusades