Look, it's like the crystal is... yes, it's growing into him. It's starting from his bracelet, and growing in.
— Crystal Researcher

Occasionally, the oldest souls of Synthacrosia will undergo a slow and painful process known as Self Crystallization. This occurs because of every soul's proximity to Soulglass, the crystal substance that Crystalline Power Bracelets consist of. Starting from the main wrist where the Bracelet is worn, and then growing inwards to the bones of the afflicted, a soul undergoing Self Crystallization will slowly, and painfully, crystallize from the inside out, resulting in death.

This Soulglass here is the un-refined kind -- so don't go holding onto it too long. In this state it's very likely it'll imprint onto you, instead of the other way 'round. This means the souls in the crystal will overpower your own soul. This can happen with refined crystal too, but it's far less likely!
— Crystal Researcher

Time takes it's toll on all souls, even ones that live eternally within purgatory. Memories and experiences continue to build up within a soul, and as time goes on, it can be a source of exhaustion. Souls that have existed for over 2,000 years in Synthacrosia are the ones most at risk; the weaker souls are at even higher risk.   With this fatigue felt in the core of the soul comes the opportunity for others to take advantage. Old and tired souls might begin to care less about themselves, even losing the idea of what makes them, them. At this point, they are most vulnerable to the reverse imprinting risk that is found with all Soulglass, even the refined Soulglass used for Crystal Bracelets.

Power Within the Crystal

Regular Soulglass often isn't strong enough to overpower full living souls, however. Soulglass is made of infinitely ancient souls, worn down to dust, mixed together, and then recrystallized. This mix can occasionally result in a very strong concentration of powerful soul remnants within the Crystal. These strong crystals will have an innate power; the crystal will attempt to exert it's will over any material in contact with it, attempting to bring it into alignment with the crystal. Stone will crystallize, water will glow and take on magical properties.   Organic material in contact with these strong Soul crystals will be reverse imprinted on, if it's will is not strong enough. Things like plants, trees, and lower animals will quickly turn to crystal, as they do not possess the will to resist. Weaker Souls within Synthacrosia still retain enough willpower to resist the Crystals effects -- however, if the weaker soul is also an ancient one, they may not posses the energy enough to care. Thus, the Self Crystallization process slowly begins.

Before the Crystallization process even begins, the effects are felt. It starts as mental symptoms, as the strong Soulglass crystal exerts it's Will over the old and tired weaker soul in contact with it. It begins with a further detachment from one's own reality. The afflicted soul will care less about their well being, and think less about themselves. Over time, gaps in their memory will begin to appear, as if they tuned out during a specific portion of time. The symptoms gradually grow worse, until the subject begins to exhibit multiple personalities. It's at this point the Soulglass has exerted itself over most of it's host soul.

The Soulglass Bracelet begins to crystallize the material it's in contact with at this point. It begins growing inwards at first. A telltale sign of Self Crystallization, if the Mental Symptoms were somehow missed, is that the afflicted's bracelet has now become a part of their wrist. The crystal grows inwards, to the bones. It branches out from there, crystallizing the teeth and fingernails next. After that, hair will crystallize and fall out. Finally, seemingly at random, organs begin to crystallize.

Death occurs once any important enough inner organs crystallize enough to cease it's function. At that point, the subject dies. In Synthacrosia, when someone dies, the person's entire body and soul fades from existence, being replaced with a single Soul Coin. This happens no matter the cause of death. However, in the case of death via Crystallization, there is a slight twist -- while most of the Soul and Body will fade away to be replaced with a Soul Coin, any crystallized parts of the body will remain.

The Crystallized husks of remains stay where the host died for some time. Most souls within Synthacrosia don't like to think about, let alone look at the results of Crystallization. The Crystal tries to continue growing after death, but with no host to take over, the growth rate rapidly slows.   Then, over the course of a few days, the entire crystal crumbles into dust.

A sense of Worth

A continued sense of self, drive to progress, and strength of will is needed for prevention of Self Crystallization. The affliction occurs based off of two things; a rare strong group of souls within the Soulglass bracelet, and an old and weak soul within the wearer. As it's purely chance whether or not one's bracelet may be the rare strong kind, the only thing a soul can do is focus their efforts inwards in hopes of staving off Crystallization. This sort of prevention is hard to keep up when a soul is a lone soul within Synthacrosia; better odds are often had when one has a support group of friends around them. Constant reinforcement of self worth from those around a soul is the surest way to keep the crystallization away. 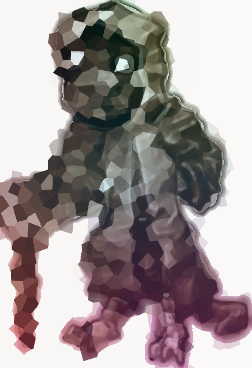 Self Crystallization has, in all cases, resulted in death. Occasionally the afflicted soul will notice the onset of the disease; it will revitalize them, and give strength to their willpower as they attempt to fight it off. Some souls in rare cases have been known to fight it off for decades. However, once the Crystallization begins, it cannot be stopped. Overtime, the afflicted person will again lose hope, and energy, and the Soulglass will finally take over.

After a soul has fully crystallized and died, their crystalline remains always crumble to dust. Many superstitions have arisen regarding this dust. Fear of suffering the same fate as the recently re-deceased is generally the driving factor behind the superstitions. Souls of Synthacrosia believe the dust should never be touched with bare skin, and should never, under any circumstances, be breathed.   Generally the deceased's friends, or the closest things to friends, will be tasked with cleaning up the dust. Donning thick gloves, clothes that cover the entire body, and any sort of face mask they can fashion, the will attempt to gently sweep up the dusted remains. This crystalline powder leftover is then often stored within a strong glass bottle, and sealed.

I once knew a friend through every single stage of this affliction. I knew them before it started, I knew them during the early stages, and I knew them during the time they tried to fight it. It was only once they gave up that I began to lose sight of who they were. I no longer knew my friend. They weren't the same anymore. There were... others... within them, talking through them, controlling them. It was when their eyes turned to Crystal that I knew they were truly gone. It wasn't long until they died.
— Remembering a friend

All images created by Stormbril.

I think it is amongst my favorite articles of this settings.   For some odd reasons i was picturing the dust used in a snow globe. i kinda wanna take this idea now haha. I know my grandma ones where placed in a elephant urn since she loved them. Would friends use suggested classical glass bottles, or would they keep em as memento for themselves?   Happy end ofSummercamp !

That is very high praise! Thank you :) I'm glad you liked it a lot.   That's a really interesting idea to bring up, too! Friends who were especially creative would likely use some sort of glass bottle that their recently deceased friend would like. Maybe friends of a now dead sailor would use a ship-in-a-bottle as the storage space for their friends dust, like a snowglobe sort of thing like you mentioned!   Happy end of summercamp to you too!