Philomena Swailes (a.k.a. The Parrot) (She/Her/Hers)

Philomena Swailes partially puts the parrot on "Black Parrot Privateers." She travels the seas of Camshire with the rest of her crew.

Philomena puts so much energy into her songs that they can rally all those who hear them to fight again. She's also skilled in swordplay herself, as most privateers and pirates do.

Performer's hat, pants, and boots. The rest of her uniform, however, is that of an assassin.

Wields a basic sword and ukele

Philomena came from a small village far from the coast. As a child, she would often sing nonsensically and became inspired to expand her talents when she saw several people give a man playing on the street some coins. As Philomena matured, she found herself drawn to the thrill of a fight, so she signed up for the Tyrian navy. In her first battle, she was said to slice a particularly unruly pirate in half with a standard-issue sword. When she isn't dispatching orders, she would take to the decks at night and sing with the ukelele she was gifted to by the performer she was inspired by in her youth. Eventually, her prowess in combat and ability to turn the tide of morale won the admiration of the Black Parrot Privateers.

Philomena signed up for the navy straight upon turning 18.

Has a habit of speaking tough, even when she doesn't really mean it. 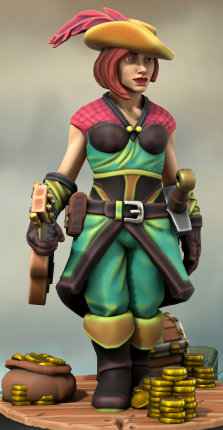 The layout of the character looks promising. I like the clashing contrast between raising my heart for the battle with rather jolly sounds of the ukulele. XD   I'd love to read more about her character and the adventures she had.

Good start but is still a little short now :) Liking the ukelele for a pirate though :)!

We could really use some narration to add to the descriptions that you have. And perhaps a picture

Yeah, I know about that. It's just that for whatever reason, the picture I uploaded won't show up.

Oh, turns out I have to click on it again after I paste the number. Done goofed.

Interesting character. What her made joined the privateers if she initially enrolled in the navy?