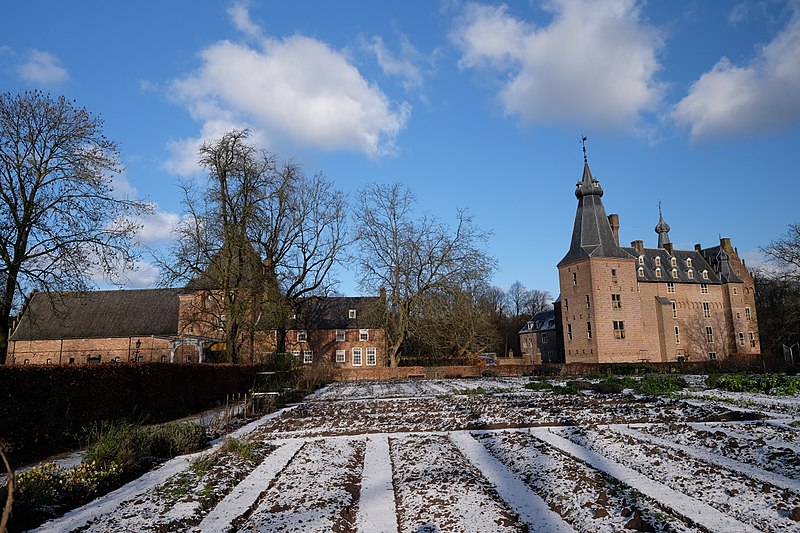 There is no written record of when the Gaggle Guard were first stationed at Doorwerth Castle. The earliest mention is a complaint from their nemesis, the gardener, that he was didn't like the guard to exercise in the vegetable garden in 1712. And even after all those years the gardeners still haven't learned that the Gaggle Guard is in charge of defending the castle and therefore need free reign to inspect all parts of it.

The Gaggle consists of sixteen adult Emden geese, the domestic variation of the Greylag goose. Emden (Anser Anser Domesticus) has an all white plumage, where the Greylag (Anser Anser) is brown and grey. Both species have orange feet and beak.

The fully trained members of the Guard are 80 to 90 centimeters tall, the occasional member reaching a full meter in height. And weigh in at 8 to 12 kg. The wingspan of an airborne member can reach from 1,3 to 1,8 meters. During aerial manoeuvres, the Gaggle Guard has a cruising speed of 50 km/h. 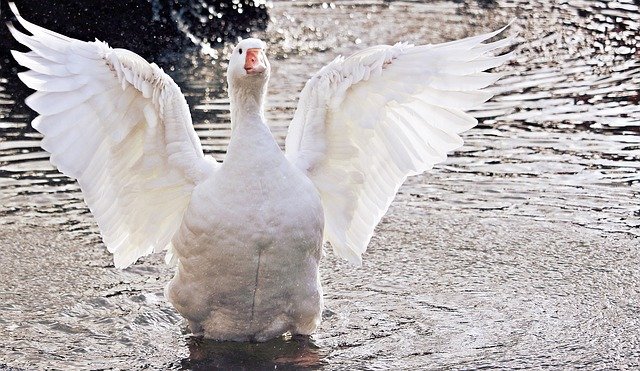 Gaggle Guard member showing off his expertise while combining Marine and Airborne skills by S. Hermann & F. Richter via Pixabay

A pen is placed on the northern side of the bailey next to the secondary gate, where there is a large patch of grass for the Guard members to hang out on. The moat around the castle gives them ample water for aquatic patrols around the premises, and the dike covered with grass and trees gives them enough space to exercise and march around.

The command structure of the Gaggle Guard is a secret only known to Gaggle Guard members. As far as outsiders can tell, they choose among themselves who is their leader. Usually it is one of the older and most experienced members of the guard.

The Gaggle Guard is an expert in wing-to-wing and beak-to-beak combat techniques. Both trained and experts in aerial and maritime transportation movements. The guard members spend quite some time with their boots on the ground, and although they aren't known for there fast and long marches, they can sprint fast and suddenly to launch attacks.

For airborne manoeuvres the Gaggle Guard flies in formation. Traditionally V shaped. This way they save energy and can go faster and for longer time. The guard member on the tip of the V takes the full force of the elements and the others follow in their wake. The head position is regularly changed, after which the guard joins one of the legs of the V to take a relative rest in the draft of the moving group.

The Gaggle Guard doesn't believe in sneak attacks, they will try intimidation first, standing tall with their wings spread making themselves look bigger and stronger, while giving audible warning signs, quacking or hissing. If the intruder or opponent doesn't respond to that they can suddenly sprint forward with wings spread wide, increasing the volume of their warning signals to jump scare the target. If the enemy stays they will result to biting, poking, slapping with wing or head and even kicking. All while loudly shouting at the intruder.

A stable hand is also the caretaker for the Gaggle Guard, cleaning their barracks, making sure there are enough supplies in stock, and distributing rations on time. If necessary the caretaker also functions as Medic.

Due to their audible attack strategy, most times the members from the Bark squad will come and watch what is going on. But honestly the Gaggle Guard doesn't need the lazy animals to assist them, they are perfectly capable of defending the castle by themselves.

The Gaggle Guard is not an expensive unit. As they mostly feed of the land, and do not require luxury housing or entertainment. About €10 per guard member per month is all that is required.

New members of the Gaggle Guard are trained by the Gaggle Guard themselves. They arrive in the unit packaged in a round shell container. And need a twenty-eight-day period of constant heating before the goslings break free. As junior member of the unit they carry a yellowish uniform and training takes about nine weeks. And only after graduation they are allowed to carry the white uniform and can they join the flight academy to turn into full airborne members.

Most other places that keep geese as pets or guards clip the wings, so they cannot fly away. This has to be done every year, cutting the main feathers in the wings short so they cannot produce enough lift. But after the caretakers of the Gaggle Guard forgot to do it one year and noticed the geese had no intention of leaving. Not even when winter came and their wild cousins traveled south. After that they never clipped them anymore. So sometimes the Guard becomes an airforce.

The geese do not only perform guard duties for the residents of Doorwerth Castle they also supply an abundant amount of eggs to the kitchen. The feathers they drop yearly can be used as writing tools, decorations, and the down as insulation material. Also, the meat can be eaten. 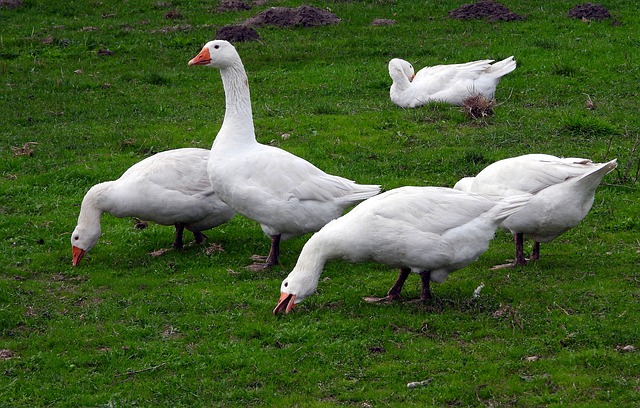 Gaggle Guard on a foraging trip, as you can see there is always one on the look out by Ada K via Pixabay 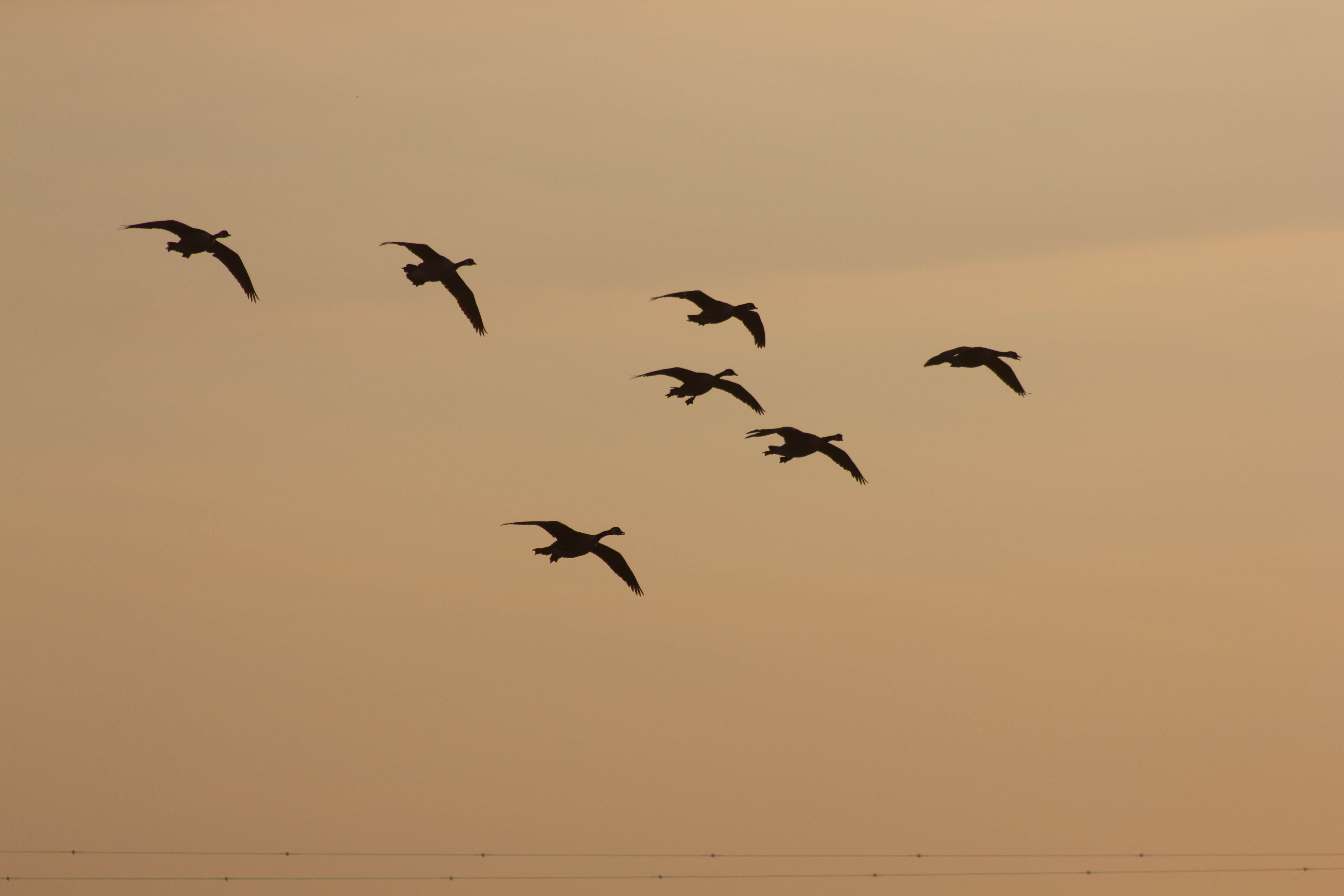 note: Gaggle is the British name for a group of geese

Answering: "a unit or squad who guards an important person"
Visit Jacob-W's Competition Page Check all other answers to this prompt Competition Homepage

In response to: Summer Camp 2021, prompt 23: A unit or squad who guards an important person.

I love this sooooo much.

Very fun article, I love the way you've written it :D We should all obviously submit before their supremacy :p

*submit to their supremacy

Thank you :). I wrote the vignette part 'normal' first, but then got into the 'funny' mood while looking trough the template prompts, and got carried away. After that I rewrote the vignette to match it. But you better listen to their orders yes :D

I don't like the anger of the geese so I would fear this guard :p

They are very good at their job yes, but they will stand down if you're with a human they know :)

This is such a wonderful article! Very entertaining. :D