Glenna Stormraven has long marked herself as a person to watch. As a Hero, as a sorceress of prodigious power, as a scion of Clan Stormguard, she is a notable individual. Her compassion is well-recorded, as is her tenacity, and her passion for justice.   She is also notably difficult to get along with.

A Rise to Power

Glenna's power was apparent from a young age. Regardless, her parents held her to normal educational standards, albeit taking into account their status as banished nobility. As a young teenager, she essentially ran away from home to attend a more specifically magical school. This went along with the utter rejection of her heritage as the heir of Clan Stormguard. Needless to say, there was some tension in the family.   She graduated early and quickly rose through the ranks of magic users, from an apprentice to owning her own consulting business. Glenna elected not to become a Wizard Companion to any local heroes, instead choosing to offer her talents to the more ordinary citizens around her. Her particular specialty was assisting young ladies to reach a happy ending, going by the standard definition.

Emperor Togarmus of Jovirenia attempted to invade Maraphel. The attack was not entirely out of nowhere, since Maraphel was a member of the United Benevolent Nations and Jovirenia was a staunch confederate of the Council of Evil, but it was unexpected. Not the least of which because Jovirenia isn't exactly next to Maraphel.   Glenna was in the town of Donebar, handling a case, when a series of portals opened up. Lacking all other options, and there being no Heroes immediately at hand, she handled the attack herself. This was not easy, despite her power, and she resorted to several more creative solutions, including making use of some natural sulfur deposits and her own skill at potions making.   The forces of Maraphel were quickly occupied elsewhere, dealing with a series of devices that Togarmus meant to use to obliterate the local population. This left Glenna as the only one directly engaged in fighting Togarmus himself, who despite his many failings was nonetheless brave enough to lead the main charge himself. He drove her back to Mount Kalga, which proved to be his ultimate failing.   Togarmus drove Glenna to the vaults of the mountain. The Staff of Clarity had not chosen a user in some time, so everyone was surprised when it responded to Glenna so easily. Glenna being not at all humble or the kind of person to be in awe of great power, quickly adapted to the Staff and wielded it adeptly. Togarmus was cast down, and Glenna was a hero, in the truer sense of the word.

The Trouble With Fame

Glenna was named First Sorceress of Maraphel for her efforts in the battle, and rightly so. Initially, she settled into the role with ease. She was young, beautiful, and smart enough to wield these traits to success with the press. She performed her new duties with aplomb, and performed her old job as purveyor of magical aid with greater success than ever before, thanks to the staff.   But with success comes a lot of people demanding that you do things for them. In this case, Glenna's clients demanded greatness from her. Glenna frequently disagreed with the nature of that greatness, and to be fair, so would most reasonable people. Even those with good reason to ask her for help, for health concerns or to save a loved one from villains, things would always take a turn and they'd end up asking her for a better nose or wealth beyond measure. Her clients got greedy, and Glenna grew more and more irate.   Deborah Clement was the final stroke. Deborah had attracted the attentions of a duke who was possessed of an unfortunate face, and she had the bright idea to ask Glenna to make the man more attractive. Feeling a bit vindictive, Glenna did exactly this. She made the man a dazzling example of male attractiveness, and in the wake of all his new suitors, Deborah was soon crowded out.   She was angry, and confronted Glenna. At some point during the exchange, tempers were lost, comments were made, and Deborah was turned into the world's first werefrog.   A court case ensued, during which Glenna's name was dragged through the metaphorical mud. In the end, she kept her position as First Sorceress, but with some adjustments. Since she had committed an act that was argued to be Evil, but had a history of being Good, she was sentenced to exist in the odd point between the two callings. To satisfy this, Glenna moved to an Evil location (the Forest of Pain) but would continue to have her old job description as a purveyor of happy endings, a Good career.   (By her own admission, the move was to put as much distance between her and her clients as possible, so she really got the best possible outcome.)   In the days since, she has saved Berniton from a mad, power-hungry gnome, and also hunted down a realtor who made a mistake on the listing of her house. The two points are, in fact, related incidents. It is also worth noting that Deborah Clement now works as Glenna's assistant.

She's generally inactive. She usually gets around based on power, by transport, or by magic. Or else has things delivered to her. Still, she’s capable of walking all the way to her house without getting exhausted. Her health ranges on the edge of a fragile balance maintained by distance from other human beings and a lot of magic keeping her healthy. Otherwise, she has a lot of pollen allergies and catches cold easily.

Gets severe hayfever around certain types of flowers.

A magical prodigy, with a lot of natural power. She excels at potions, but with her use of the Staff of Clarity has also become highly proficient in the gestural applications of magic. Her specialties include storm magic, and multidisciplinary spells.

Generally keeps to the wardrobe standards of her chosen profession, which includes a number of flowing gowns and cloaks. To match her status as a sorceress of Maraphel, she typically sticks to white, green, and blue. Her clothing is not ostentatious, but it is generally expensive.

The Staff of Clarity is, to a certain extent, connected to her psyche, and losing it would undoubtedly result in some consequence. However, recent events have demonstrated that her abilities as a mage are not connected to the staff. Foes would be well advised to consider this.

Glenna was trained and educated by tutors until about age twelve, when she was sent to a private boarding school. Lasted until she was fifteen, whereupon she decided she was going to use her magical talent and become a sorceress. Ran away to Andorat Magical University, where she majored in light magic (as in lightbulb, not Good) and minored in transportation spells, graduating at nearly the top of her class but two years early.

She started out with a standard wizard setup (a research/investigative position), and quickly transitioned into a magical consulting business with a specialization in happy endings for young ladies in need of magical assistance, especially those interested in the Hero or Love Interest trades. Which she liked, but before too long she got involved in a plot to save the kingdom and ended up doing some pretty spectacular things, which got her named First Sorceress of Maraphel. After that she basically consulted with the rulers of Maraphel first, while still managing her consultation business, which boomed because she’d been recognized as powerful.

Turning Deborah Clement into the world's first werefrog was something that Glenna intensely regretted, and not just for the massive legal trouble she was in after.   Another failure comes from the fact that she trusted a gnomish realtor.

Losing her home as a child isn't something that Glenna thinks about much, or considers. It is likely that her family losing their home in that manner, as well as subsequently being hounded by assassins of Clan Cloudphage, did contribute to the guarded demeanor she presents to the world.

A very smart woman, she excels at seeing the bigger picture and acting accordingly. What some would mistake for hyper awareness of her surroundings is simply an analysis of assumptions: she is very good at predicting where people and threats ought to be. Has a decent knowledge of geography. Very well read.

Her general philosophy of life is that the world is full of idiots, most of whom are trying to do the right thing, nearly all of whom are failing. Also, people are selfish.

She has developed organizational and management skills over the course of her career. Whatever limited people skills she has are hard won.

Glenna is typically described by people who like her as:

To those at odds with Glenna, she is often described as:   She’s also the kind of person who doesn’t really consider humility a virtue because she’s always been in a position to be a bit more arrogant. Not being confident in herself and her abilities is not a natural state for her.

Her parents, Derek and Gwenn Stormraven are largely retired. They do not entirely approve of her chosen career and thus they haven't spoken in a while. Glenna has a younger sister named Morna who is now in charge of the clan. They haven't spoken in a while either.   She has a pretty big extended family, and one that’s fairly spread out after the attack. There would be a few who would see it as a chance for a fresh start, and others who would simply spread out to avoid potential blast radii. The rest would be interspersed through the clan. Glenna’s probably related in some way to almost every one of her sister’s soldiers.

Magic is her job and her primary hobby both, but she also knows a bit about weaving, due to an interest in her Deormic heritage when she was younger. Can whistle chords.

Glenna, as the older sister, was meant to take charge of the clan when she grew up. Instead, she became a sorceress. This worked out since Morna liked being in charge of the clan and was good at it, but the rather abrupt shift in expected roles caused something of a strain and they avoided each other for several years. 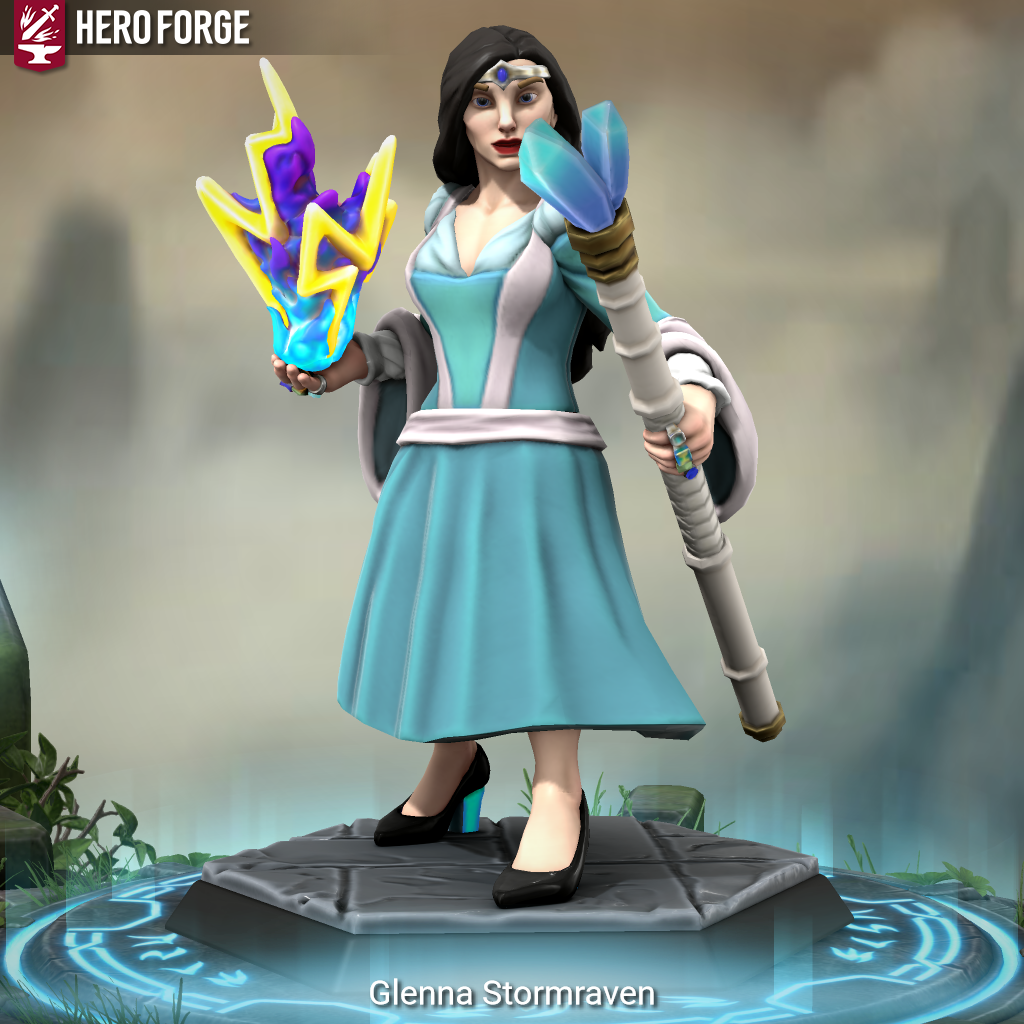 Honorary & Occupational Titles
Age
Late 20s
Birthplace
Deorma
Parents
Derek Stormraven
Gwenn Alarch
Spouses
Siblings
Morna Stormraven (Sister)
Children
Current Residence
The Gorman estate, in the Forest of Pain, in Maraphel
Biological Sex
female
Sexuality
She dated a few guys when she was in school, never for more than a few dates, and in college she had two relationships, neither of which happened after she really got into her studies after the first few months. She doesn’t have much use for wasted time, and she feels that unless she’s really committed to a relationship then it’s not worth it.
Eyes
Gunmetal blue
Hair
Naturally platinum blonde, but currently dyed black with a green streak to frame her face; kept waist-length
Skin Tone/Pigmentation
Very pale
Height
5'9"
Aligned Organization
Maraphel
Other Affiliations

I like how you show both her strengths and her flaws, especially how she turned Deborah into a werefrog.