On the southern rim of the Starwell, several hundred miles north of the Magisterium's premiere fortress, Shadow Bastille, lies the brooding city of Osklund; A dark button of civilization woven into the green-flocked hem that surrounds the Starbreaker Lake. For many centuries these lands were an unremarkable fiefdom nestled amid deep groves of primeval forest and plains of foreboding briar, home only to forgotten hermitages, beasts, and Outsiders. This all changed when an aspiring, and wealthy mage by the name of Vicktor Osklund purchased the territory in the year 3185. The ancient woodlands were hewn, the bramble blazed and burned, and upon the mouth of the Starbreaker Lake stone and cobble was laid.   The lands near the Starwell are dangerous beyond reckoning. The magic of the Eight Winds creates a seeping miasma that taints and transmutes all that it touches. Even with the close proximity of the Spelltowers, raised by Rizion, the messianic mage of Orr's salvation, the magic that leaks into the world from the terrible wound in the planes caused by the crash of the heaven-dragon is a force few dare attempt to wade against. Osklund was considered insane to even attempt to build his city on the Starwell's shore, but none had the foresight to predict how madness would soon become Vicktor's legacy.   In its infancy, Osklund endeavored only to build a center of research to be inhabited by the guild of mages he had formed to pursue their interest in an unknown field of magic known as Neuromancy, but he and his Neuromancers quickly found that their studies required… exceptional subject materials. Osklund journeyed south to Shadow Bastille for two years and when he returned he brought with him a menagerie of madmen and lunatics released from the Magisterium prison into his custody.

The Institute of Neuromagical Study for the Mentally Disturbed

While arcane scholars in the modern era have dismissed Neuromancy as a little more than a contrived splinter of the greater schools of magical theorem that it draws upon, during its fledgling years Osklund and his Neuromancers drew great attention to their studies and research. They garnered the curiosities of many extraordinarily wealthy patrons, some of whom believed their gold was well spent just to be able to visit the research center and gawk at the insane subjects that were beginning to arrive at the institute in mass, and furthermore the Magisterium itself was pleased enough to simply be rid of such undesirables. With such lavious outpourings of gold and with their research center becoming home to the realm's lunatics, the Neuromancer's lyceum quickly became the world's first, true asylum for the insane.   While the asylum has had many names over the long centuries, the Institute of Neuromagical Study for the Mentally Disturbed, or simply, "INSMED" became infamous not just in the lands of Dalair but across the world. These beginning years were fruitful beyond measure and with the needs of the asylum and the city growing so exponentially there was a massive call across the realm for tradesmen and scholars of all calibers, which in turn brought greater fame and prosperity.   Osklund and INSMED had become a strange, unforeseen nexus of intrigue and wealth in little more than a decade, and this troubled the Magisterium whose council of mages often deliberated upon it with worry.

"...The truth of the matter is that we have no idea what these Neuromancers are researching. They have a thousand lunatics from every prison in Dalair, whom they barely have the means to confine, locked inside towers, staring out of their cell bars into a hole in the planes across that lake while thousands more are arriving to build a city in the shadow of their cells. Do we intend to idly await the inevitable catastrophe that is unfolding before our very eyes? Something dreadful is to come of this, I am certain."
— Archmage Zelacroix

The Magisterium's fears were not wholly unfounded. The Neuromancers of INSMED were indeed probing into matters well outside the curriculum of any college of magic in the known world. Their methods were secretive, and some believed even diabolic. They produced outstanding, although truly bizarre inventions and insights into magical theory the like of which had not been seen in centuries. Regardless of their results, it was not long before rumors began to emerge about the insidious nature of the asylum.   Perhaps it was simply the common fear that quick ladders to power often yield, or perhaps merely the subjects of the INSMED mage's experiments whose natural disturbances and insanities were multiplied by being thrown into an ever growing population. Fear and distrust in the Neuromancers began to grow, and whether they were truly dabbling into methods and means too horrible to speak of or not, the asylum's fame now brought it to mind as the answer to any dark question. Disappearances were blamed upon INSMED and the Neuromancers, as well as the appearances of ghastly beasts and outsiders in all the surrounding regions, and even common ills such as headaches and lapses of memory. In addition to these already slanderous claims were the very real concerns that INSMED was attracting the attention of rogue mages. Wizards, sorcerers and perhaps even warlocks held in the palms of powerful entities, who saw the growing success of the INSMED experiments as a chance to practice and disguise their own forays into the unknown under the wide brim of the asylum.   These portents and perhaps the grisly nature of the asylum itself with its screaming, incoherent prisoners whose howls and agonizing screams could be heard like a dark chorus throughout every hour of the day and the night would lead to an event of insurmountable hysteria and ill fortune.

The Night of Terror

Despite the best efforts of the Magisterium's investigators, the true cause of the Night of Terror is utterly unknown. While thousands were witness to the events, and numerous attempts to divine answers through every medium of magic at the Magisterium's disposal have been made in the following centuries, no insight has been gleaned as to how the fire that nearly burned Osklund and all its citizens into ashes began or why such mass hysteria gripped the city so tightly that even amid the flames and burning buildings, perfectly sane men and women committed such atrocious acts of mutilation and violence.   Days prior to the events leading to the blaze include a string of disappearances of several young children, and a Magisterium Archmage. Witnesses to the events, included several Neuromancers of INSMED describe a sudden, unprecedented riot in the asylum wards that allowed a large number of inmates to escape into the surrounding gardens and waiting grounds. Tandem to this prison break a fire erupted in the Blackbirch district of the city, its wealthiest sector, and spread voraciously from building to building. In a sudden delirium the city streets were filled as residents fled their homes, but rather than run for their lives the citizens of Osklund began to engage in unspeakable acts of murder and brutality. Those who did possess their senses could only watch in horror as their neighbors and loved ones flayed one another alive with little more than their own fingers and teeth, or ran screaming towards the asylum with torches in hand and began to assault the gates and protective wards. Some witnesses describe a mantra or a chant being spoken by those who seemed possessed in the violence, while others claim despite the screams and the flames that the city of chillingly silent, as if Osklund were cloistered inside a bottle.   The fire did eventually spread to the Asylum itself and as the Neuromancers of INSMED fled for safety they left many hundreds of prisoners locked inside their cells to be burned alive in the encroaching blaze. 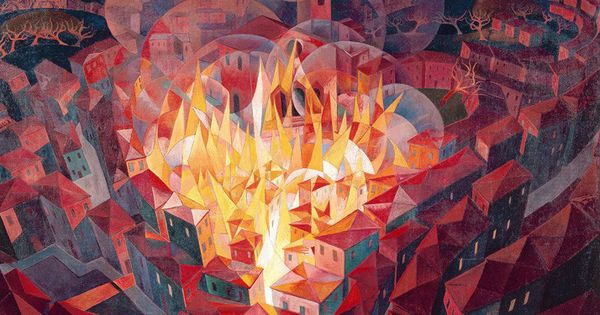 Burning City (1926) by Gerardo Dottori
The fire and the hysteria lasted for several days. The blaze became so powerful and bright that it could be seen from the parapets of Shadow Bastille as an orange glow on the horizon, and it wasn't until nearly a week afterward when the Magisterium had mustered entire legions of Eldar Knights and Scholars to march upon the torched city that the panic, and the bloodletting was quelled. By some miracle, or perhaps curse, the fire had not destroyed the asylum or all of Osklund itself but over a thousand had died in the unprecedented chaos.   When the flames had been doused and the Magisterium was able to begin a proper search and census of the survivors it was discovered that Vicktor Osklund had apparently died or gone missing, although no remains of his were ever found. A myriad of conflicting reports and witnesses declared that he had been seen in the center of the city just as the violent madness had reached its fever pitch and that he had been torn limb from limb, while others claim they had seen him standing at the top of the asylum's greatest steeple and that he had thrown himself to his own death.

Though no conclusion was ever drawn as to what exactly had happened on the Night of Terror or who was responsible, to the shock of nearly the entire realm the Magisterium declared the event as merely an unfortunate disaster and assisted the remaining Neuromancers in rebuilding the sections of the institute that had been lost in the blaze.   Since the Night of Terror and the loss of INSMED's figurehead the city of Osklund's reputation has shifted into one of distrust and fear that it has never truly recovered from. While INSMED has survived for many centuries now and is known for its instrumental work into psychiatric treatments, many in Dalair are too terrified of Osklund's past to venture there willingly. The population of the city has dwindled to a resolute, but vanishing figure still made up primarily of madmen and seekers of the unknown. The Magisterium has taken an odd stance in allowing the mages of INSMED to practice and experiment relatively unaccosted, but perhaps their policy is simply that if what is being done in INSMED stays in INSMED it is better that the world remain ignorant. 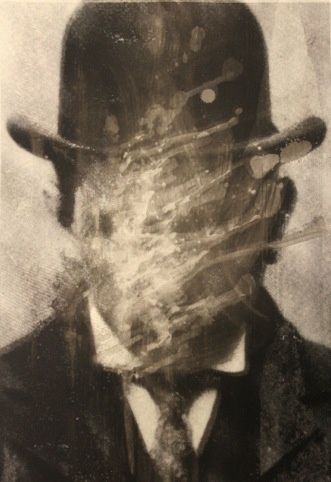 "Is it any wonder that in this world of monsters, witchcraft, and bedlam that the realm is rife with lunatics and madmen? Unspeakable horrors lair in the shadows beyond the walls of every city, with a thirst for blood that is never satiated. Magic that can tear down the walls of the universe leaps from the fingers of any whom can muster the will and the proper incantation. There is no security in this life. No knowledge or seed of understanding to make sense of how fragile and small mortals are in the oppressive shadows of these forces. If our doomed kind is to endure the ages ahead we must study and understand not just the unforgiving world we have been thrust into, but ourselves, and our brethren. There is so much that can be learned from those who have peered too long and deeply into the abyss.
— Vicktor Osklund

Great choice of artwork - it really adds to the mood of this location!