I find it amusing that humans claim to abhor something or someone and then decades or centuries later they take pieces or parts and weave it into their life.
— Neni'taca commenting on the fashion influence of the Dro'co

While the number of people who have an original Dro'co is low, the number of beings who know of its origin is low enough to be counted on two hands.

Over time many design elements converged on pieces of symbolic importance to the Remnants.

As Remnants have, according to legend, pieces of the sun and the darkest parts of the night sky woven into their very being, it became an important part of the Dro'co.

Most have contrasting colours of dark blue to purple and light yellow to red. Adding green, the colour of the gods came naturally to most.

Many parts of the clothing are in threes, three colours, three types of material, etc. The current belief is that it was supposed to represent the gods, the remnants, and all the other gods creations.

Every remnant personalized their Dro'co in some way. This was often done with decorations, such as broaches, or by changing the colour or cut.

Those remnant's with shadows of light were very fond of switching the main colours of dark blue-purple and yellow-orange around while keeping the green belt.

When the Order of Remnants came to be some argued that all remnants should be wearing clothing visually distinct from the gods other creations. This suggestion did receive pushback and there was never a uniform created. However, that did not stop many Remnants converging on a similar design over time. 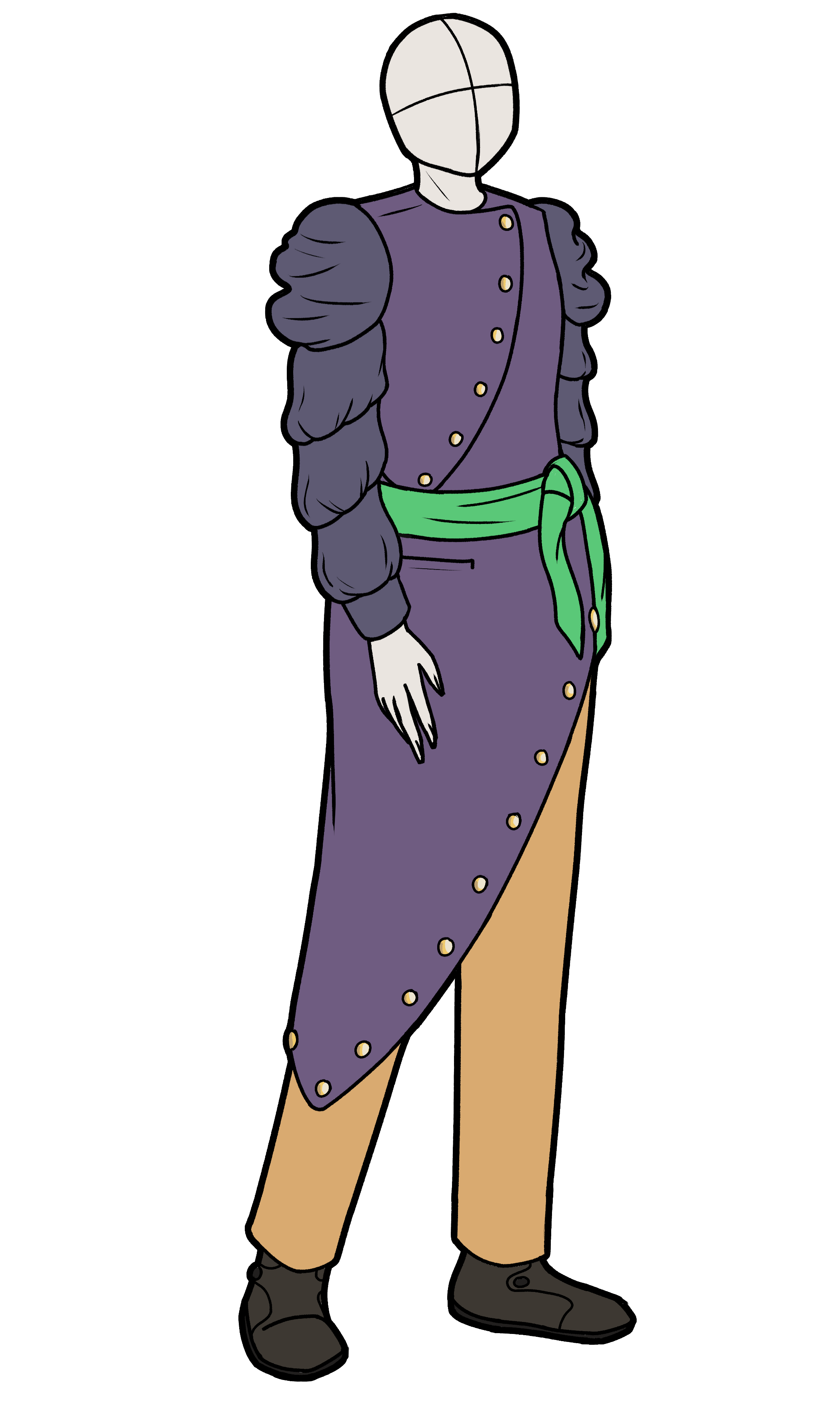 Before the Grey War a variation of this costume was worn by most Remnants, but after the war there were only a handful left.

Basic sowing tools, such as needles and thread.

Shadows of light and dark

Nice article, I like the colour and number symbolism :D So is it the combination of the specific cut in your image and those colours that are specific to the dro'co? I'm just a bit confused because you say "Every remnant personalized their Dro'co in some way. This was often done with decorations, such as broaches, or by changing the colour or cut." so I wasn't sure :p

The image represents a late version of the Dro'co without any personalizations with a typical cut and colours.

Really nice article! Not too long, and gets straight to the point without any fluff. I can certainly appreciate that as someone who often writes far too much…   I like the rule of three with the outfit, that’s very unique. I even checked the image, and the amount of buttons is even divisible by three! That was very nice to notice.   Since it isn’t official, are there immense differences amongst some of the outfits, or when a “similar design” was agreed on, was it generally the same?

Yes, having the number of buttons divisible by three was *definitely* intentional and *not* a happy coincidence. :P Early on there were bigger differences, but after the grey war the design converged, in a similar manner to how in our real world suits and ties are very similar in design.

Nice read! The rule of three is quite an interesting cultural thing you added, I like it. The image you created is also quite nice ^^   "While the number of people who have an original Dro'co is low, the number of beings who know of its origin is low enough to be counted on two hands." Should this not be that a lot of people have it? The sentence seems like it wants to do a contradiction.

I did not create the image, I merely commissioned it from StukaGoggles, but I know they'll appreciate your comment :) The background to the "low numbers, even less knowledge" is that there was a long war and a few additional decades between the Dro'co being commonly worn and the current time. During the war a low number of Dro'cos survived tucked away, but time has mostly worn away the memories of where they came from.

Saw your post on the Showcase channel. Short is great. You got a lot of hints of your world in there with the colors, sets of 3, and history. Also like that this is a miscellaneous world.

Thank you, much appreciated. Yea, I like to create and sometimes the result is too miscellaneous for any other world. :D