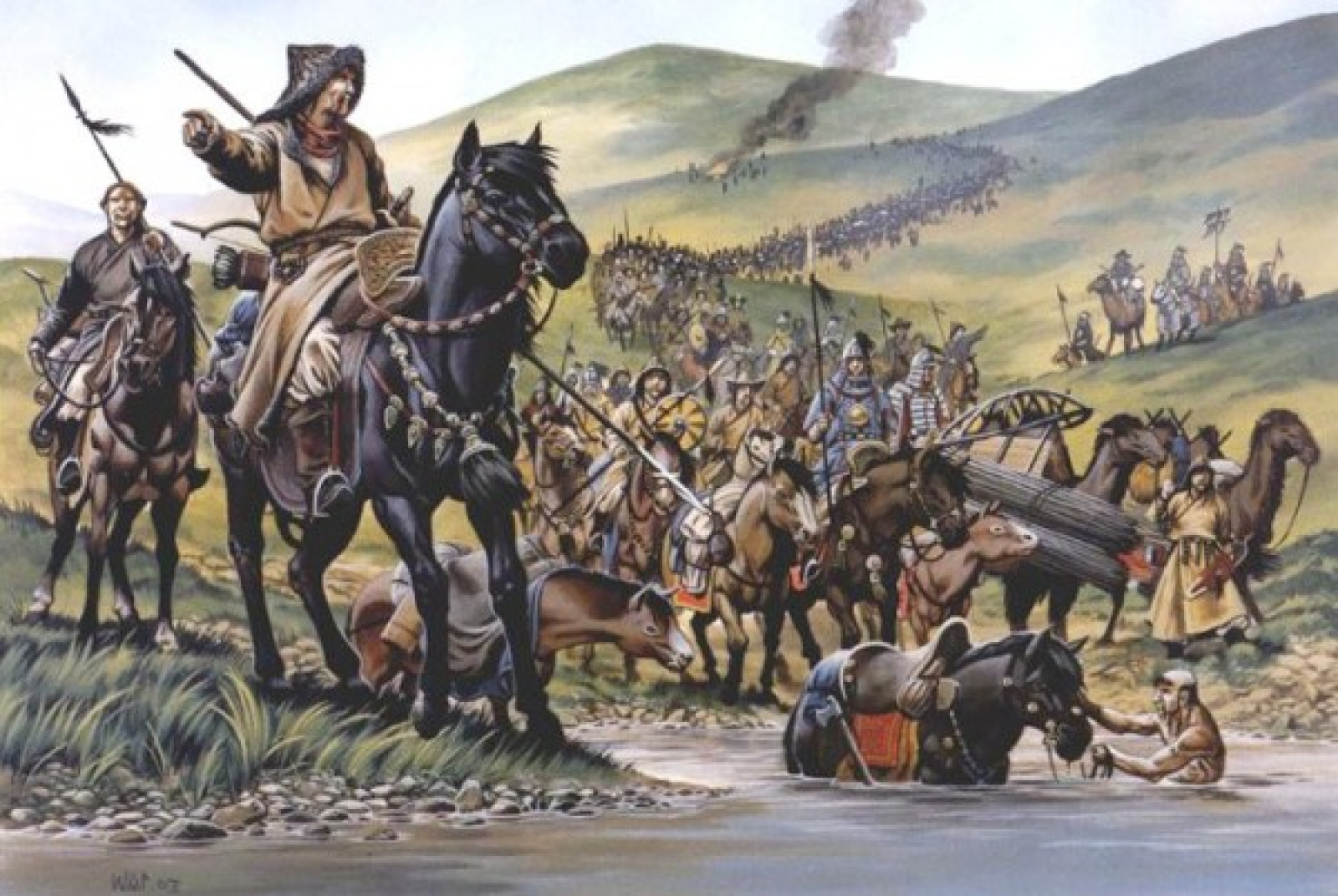 Yuri departs the mill after spending the night outside its fence with the archbishop's riders. He agrees to leave markings for his companions to follow once they have returned from Malinka, and rides off in hot pursuit of the Kochmaki. At noontime, he finds a child's corpse, apparently whipped to death by the marauders, and continues to follow the raiders. He finally catches up to them around sundown, and looks down at the encampment from the top of a small bluff. Hundreds of raiders, and more captives, have set up a camp below. The raiders' whips crack as they force the captives to light fires, and the sounds of wailing reach him at his observation point.   Eager to spot his loved ones, Yuri lingers too long at the outcropping, and is spotted by some of the guards. He draws back into the woods, hoping the Kochmaki will not follow a lone rider. His assumption proves mistaken, as two (or probably more) riders soon appear, yelling at him to dismount and drop his weapons. Yuri rides out to meet the lead pursuer, but his first real fight does not live up the heroic lays about the bogatyri. His spear grazes off the rider's silken shirt, while his opponent, likely more experienced, manages to catch Yuri off-balance and bloody him. Hearing reinforcements approaching, sense wins out over heroism. Yuri turns his horse, and flees. The riders pursue, but horses tire quickly, and with darkness approaching, the riders turn back. Yuri rides deeper into the woods before concealing his horse and retiring for the night.
* * *
Back at the mill, Kesha, Fedor, Alden and Zoya decide to return to Malinka with their prisoner - Zbigniev the miller. He is tightly bound and gagged, and draped over Fedor's horse. Shortly after going past Vladykino, Zbigniev breathes fire out of his gagged mouth, catching Zoya and Alden, but more importantly, burning through his gag and ropes. He then hisses out that his assailants will all burn, and once again succeeds in putting everyone except Kesha and Fedor to sleep. Fedor succeeds in skewering the miller, while Kesha then lifts his veil and suggests that the miller take a nap. After a short debate, in which Fedor insists on finishing the "monster" off, Kesha insists on bringing him back alive. They bind Zbigniev again, Kesha heals him, and then, ensorcels him to follow along quietly.   After two days, while the group is approaching Malinka, they are joined by Yuri, who has decided to ride back to the archbishop's estate to seek more help. He tells them about his encounter with the Kochmaki, while they tell him about the fight with Zbigniev at the mill, and his second attack against them on the road back.   At Malinka, the group turns Zbigniev over to one of the archbishop's attendant priests, Father Oleg, and is the invited to take refreshment in the rectory (in the meantime, Zoya wanders off to look for more thistles). They inform the priest of the miller's evil deeds, and the true function of the mill, and then, Kesha and Fedor spy on the archbishop's conversation with Zbigniev behind closed doors. They overhear Zbigniev claim they attacked him, and used sorcery against him. Later, the archbishop visits the group while they are eating. Yuri entreats him to send people to free the captives from the Kochmaki, but the archbishop demurs, saying he has at best 50 people, who cannot fight hundreds of raiders. In any event, he is responsible for the lives of those who live on his lands, and he will not risk them to free the prisoners. In response to Yuri's plea for aid of some sort, he suggests that he is free to recruit any helpers he might find, track the Kochmaki, and attempt to buy them out of slavery. He will not help materially, however - all available funds must be spent on rebuilding.   Kesha, in the meantime, asks the archbishop to tell him more about the mill and the miller. He also shows him a document that stipulates his mother owns a piece of land, and asks where it might be. The archbishop replies that the land is that on which the mill stands, but recommends that Kesha forget about it, as trying to claim it will only bring trouble. He tells him that he is now free, and that he should use the opportunity to get away from Vladykino.   A new group of captives is brought to the estate. They were apparently sent back by the Kochmaki as a goodwill gesture - or perhaps to demonstrate that the incident with Vladykino is best considered closed. One of the captives - an Irii merchant named Konstantius Azovos - wanders into the rectory, looking for the archbishop, and for something to eat. He is introduced to the rest of the group, and tells of his brief experience as a captive - perhaps a case of mistaken identity.   All five companions tell their stories before Fedor and Alden retire to their homes to sleep.