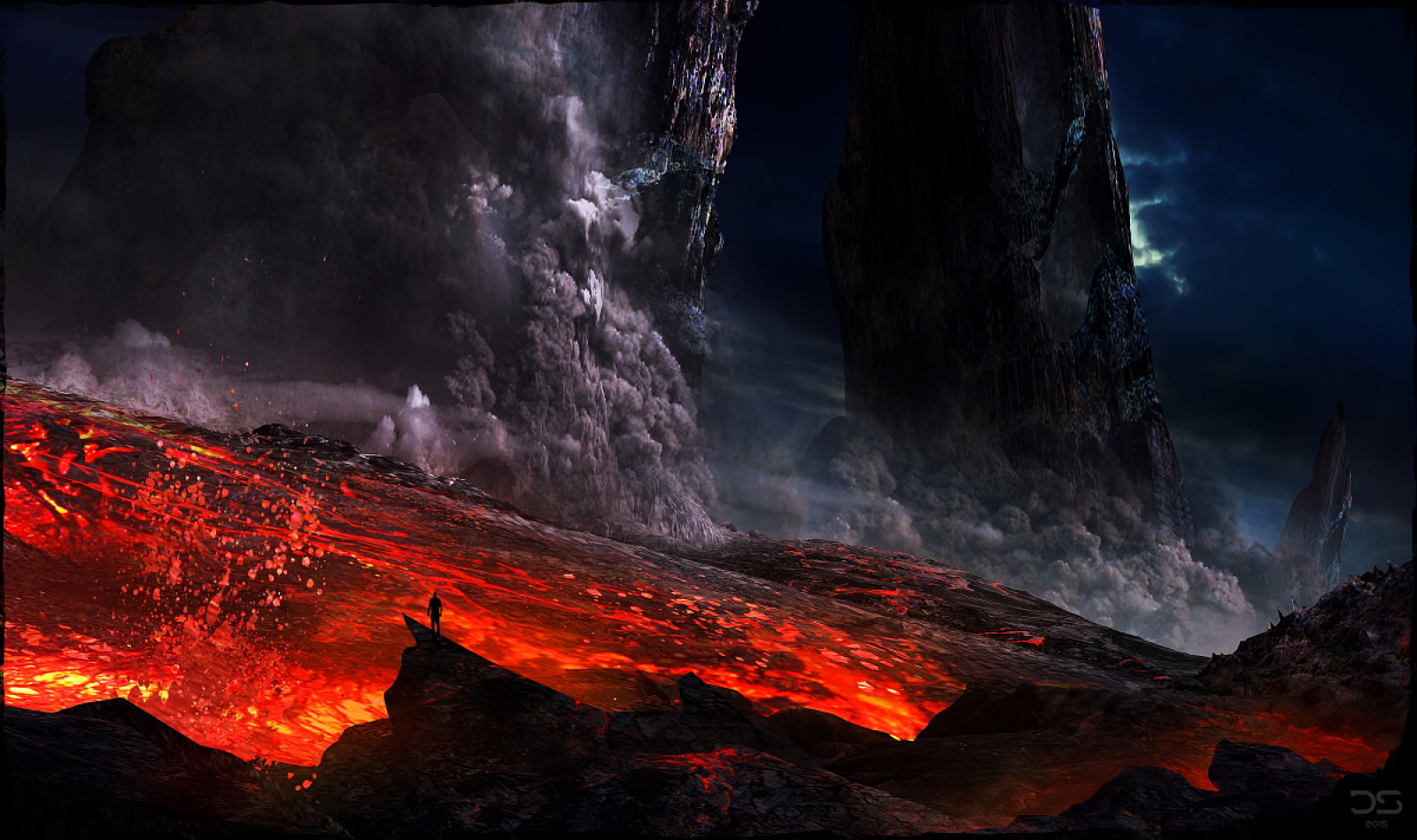 Where life began; where war reigns; where death awaits.

The frozen wastes of Iskaldhal's mountains seem to indicate a severe lack of heat in the northern continent, but any inhabitant will smile knowingly at foolish outlanders willing to dismiss their homeland as made entirely of ice. Hints at the Heartforge's existence come in the forms of geysers of burning hot water, small hot springs jealously guarded by nearby villages, and the occasional emergence of magmatic creatures such as red oozes or magma dragons. These have lead researchers from other lands to believe that a system of volcanic activity runs beneath the continent, similar - or possibly connected to - the system(s) running across the continents of Valathe, Xin-Jiyu and Takawaoku.   They are not entirely wrong.   At the centre of Iskaldhal, shielded from view by the continent's steepest slopes, lies the Heartforge's entrance - a cataclysmic crater that stretches over thousands of kilometres. At first glimpse, one might think they have encountered a direct portal to the Abyss's depths. Burning-hot geysers of magma erupt across the crater, covering the myriad of obsidian holes in the landscape with fresh waves of lava. Creatures twisted by fire bathe in deep lakes of lava as violent tremors spawn deep holes into the eerie darkness beneath. At the absolute centre of the crater, a violent spike of obsidian seems to spear the landscape - jutting cracks spread out from its point of contact, glowing red due to the lava running through their lower depths.   This is the Heartforge. If legend is to be believed, this is where Dwarvenkind began. Countless battles have raged over its eternal inferno, the blood of the fallen melding seamlessly with the fiery 'blood' of Istralar itself. It is an eternal reminder. The brightness of life, the twisted finality of death, and the endless maelstrom of violence all beings must endure.

Encircling the expansive caldera is an impressive mountain range, known collectively as the Hands of the First by the dwarves, and as the Fellspire Mountains by most others in the region. Whilst the Northern Continent has historically been geologically violent and, as a result, extremely mountainous, these stand taller than most others on the planet and shield the Heartforge from view. Flying over the Heartforge is also inadvisable, as the fumes it emits can be deadly, and flying over the Fellspires is a feat that requires special protections due to the lack of oxygen at those heights. In addition, magical and mechanical transportation mechanisms have been known to fail whilst crossing the borders into the Heartforge, for no known reason. It is for this reason that pilgrims generally enter the area through dangerous tunnels created and viciously guarded by traditionalist dwarves, or through careful teleportation. Though no incomprehensible issues have been reported when entering via the Fellspires (whether it be through tunnels or via descending from the peaks after climbing up), this is still a usually-insurmountable task - the mountains are incredibly dangerous places with a terrifying mixture of violent fauna, unpredictable weather, strong geological activity, and very little available food.   The Heartforge's outer area is an immense crater of obsidian and other volcanic rocks. Lava lakes, vents of sulphur, geysers of magma and sinkholes leading to the inner Heartforge litter the crater's expansive area, often interrupted by deep cracks torn into the earth by the tremors that often rend the area. Particularly noticeable is the jagged shard of obsidian plunged into the crater's centre, a spiderweb of cracks echoing out from it - this is often referred to as Magrim's Blood by the dwarves, and as the Godblade by most others.   Very few have seen the Heartforge's inner areas, and of those who have survived their encounters, precious few are willing to talk about what they saw. It is said to be unbearably hot, and contains structures in a long-lost architectural style - temples to the dwarven gods, allegedly. Nearer its core lies an enormous diamond carved into a faceted sphere and radiating golden light. Whilst it has an intricate doorway leading within, a second entrance can be found at its top - where the ebon tip of the Godblade has speared through it, splintering its surface. This alleged structure contains the Sanctum of Creation, where the Gods carved the first of the dwarven monarchs from the purest diamond, and is also said to function as a direct entrance to Magrim's realm.

The true history of the Heartforge is not known. Dwarven scriptures are the most complete story of how it was formed, but as with all content involving deities, it is uncertain how much is true - and how much is being left out.   When Istralar was new, the gods wished to bring to life their creations. Torag and his family, as the majority of what would become the dwarven pantheon, constructed an immense forge beneath the world's surface. This forge, the Heartforge, is where they shaped the dwarves - heroes and leaders from precious gemstones, and others from a variety of powerful earth, to better withstand the heat of their own forges and the blows other races would deal them. Initially, its surface was shielded - layers of fortified earth protected the ground from damage, and dwarvenkind settled in the nearby hills.   However, budding mortal life attracted unwanted attention. The Abyss's forces invaded en mass, forcing Torag and his kin to defend their own, long before the laws against divine intervention were put into play. It was in this battle that Trudd, strongest of the dwarven pantheon and youngest of Torag's children, suffered a mortal wound at the hands of Rovagug's then-lieutenant - a ferocious monster whose name has been wiped from history. To save his nephew, Magrim, god of the dwarven afterlife, sacrificed his physical form in the Heartforge. His physicality, combined with the healing power of Bolka, was enough to remove the corruption, and from the remaining blood Magrim had left, Torag forged a mighty blade that would forever guard the Heartforge.   It was during Rovagug's next attempt at destroying the world, during the First Divine War, that the Heartforge suffered its major blow. Whilst Torag and his kin were distracted, Thremyr - the colossal god of frost giants and ice - took action. Upon leaving the Abyss, he cleaved Iskaldhal from the mainland, and wreaked his fury upon the land. The witch-queens, until then hidden in the forests, bargained with him for some sort of peace - and in doing so, gave him the location of the Godblade. It was through his touch that it was corrupted, and Magrim's influence could do little to stop him from the other plane. By the time Torag's army could intervene, Magrim's Blood had been used against its creator - it had speared the Sanctum, and unleashed sin upon the Dwarven race. To mitigate the damage, Torag used his hammer to drive the blade further into the earth, sinking the Heartforge far lower than it had been. Knowing that this would not be enough - that demonic influence could never entirely be purged - Torag then drew up the fallen dwarven heroes and bid them guard the Heartforge. This would be their duty, to seal the area so that none could further fall victim to Abyssal corruption and so that one day, a true hero would purify Magrim's Blood and restore the Heartforge to its former glory. Each accepted, and stood sentinel around the Heartforge's edge - their diamond forms shaping into the Hands of the First.   Many have tried to meet Torag's challenge of purification, but none have succeeded. The Heartforge thus remains a site of solemn pilgrimage for dwarves to understand the darker aspects of the world, to witness the place they began, and to swear fealty to their deities so that they might never fall to such destruction.

The Heartforge lies awake, tossing and turning as demonic corruption further seeps into Istralar, ever awaiting the hero capable of overcoming the near-insurmountable challenges guarding it from all that would seek to do harm to it. As champions take up their mantles, long-dormant beings rise up from their rest, eager to use one of the most powerful divine artefacts upon the planet for their own ends...   There are three constants in this world, and the Heartforge knows them well. The burning flame of Life. The biting chill of Death. And the ever-drumming heartbeat of War.   In the silence of the night, the drumming grows louder. 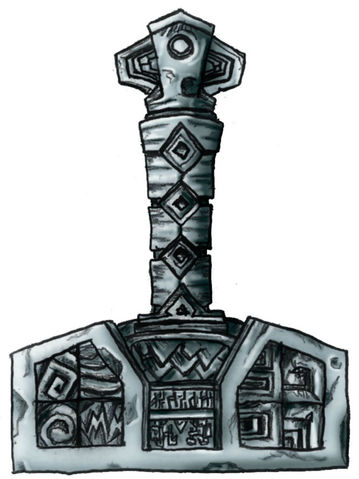 Answering: "Describe the most impressive landmark in your world."
Visit Hanhula's Competition Page Check all other answers to this prompt Competition Homepage