Wilith was a Aravitourus noble during the height of Dantus's control. However she lost everything and now seeks a way back to power by joining The Union of Pellamulara.

She wore a one piece dress that went to her thighs. Iide was the softest and most expensive wool one could ever imagine.

Her sole ability to fight is her fire dance. While not tailored to combat, it certainly can be used for it.

Wilith was born into high society. She grew up during Dantus's conquers and never knew anything other than that. She was a beauty among many of the Aravitourus nobles in his court. Her presence was legendary among many and it only rose higher with her training in the art of fire dancing. Seeing one of her dances was said to be awe inspiring. Dantus he found them amusing. She was at the top of her game.   This continued as she aged, but she would never make any romantic relationship. Due to the Aravitourus's short reproductive years, it was tabooed not find a mate. She of course, kept her strength, but this would not appease the court. It was not long before her family found her disgraceful and needed her gone before she ruins their house's name. This is when the Scion's Circle entered her tale. On the night of her final dance where she would be assassinated, the circle "kidnapped" her to avoid her death, but only just barely.   She would confront them about this only to finally understand after the news spread throughout the city of her death. The Scion's Circle promised to bring back her good name if she pledged to aid them in their fight against Dantus. With nowhere else to turn, she agreed.

Wilith is one that believes there is a solid line between good and evil. There is no grey and sometimes fate chooses for you. You must make due with what you have even if it means harming others for power.

She was her money and power back once more. The court made her lose it and now she wants it back by whatever means necessary.

She was able to talk with almost anyone. People say she was quite flirtatious to anyone who she thought could benefit her and she was good at it. Her manners and posture were increible which made her a sight for the occasions in court.

Lady of the Court (Important)

Wilith was part of Dantus inner court of lords and ladies in his land. She was a member and was quite important in it, however she had a distaste for Dantus and his "Embrace", but no malice towards him. He spoke with her on a few occasions, but didn't see a reason to be friends or allies.

Wilith had never seen a person from a lower class lead in such an inspiring manner. It was commendable and respectable. When they found similar Aravitourus interests, they grew close, but not as much as she would have liked. Riss found her to be a great ally and friend. She was ready and able to sneak into almost any event and find out the tiniest of secrets.

When to opposing personalities collide, it doesn't end well. However, when both philosophies and fighting techniques collide, it spells disaster. Lucky Riss kept them from killing each other, but instead brewed an unintended rivalry. No matter the the objective, they both try to outdo the other, when it's safe to do so.

Being of noble blood, Wilith had met Thyrador on a few occasions when he was on the Circle's buineses. They had some similar interests, but disagreed on political ideologies, but that didn't stop them from becoming friends.

She could buy almost anything she wanted either by using his house's wealth or seducing a noble of the court.

She has inspired many dancers to replicate her dances. She influenced nearly all of musical expression, yet it was only her hobby.
— Archivist Renna


Remove these ads. Join the Worldbuilders Guild
The Union

First I want to say that I enjoy the artwork that you used and the details in this article is great. Great use of the relationship part of the template!. and a very nice quote!   I am curious about the origins of her name. was it named after someone in her family or someone important in the kingdom?. I am curious how she died as it is not mentioned in the article.?   overall a good article! 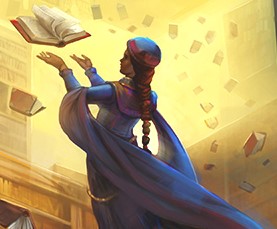 Thanks for the feedback! I'm glad you liked it. Now to answer your questions.   1. So if you are referring to the name "Wilith", then that is a common name of the social class between the races during this time frame. If you are referring to the title "Lady of Fire" then this is the first occurrence of this title that we know of. While this appears generic, it was originally written in Araen then translated into Imperium Basic, so some of the nuance might have been lost. Generally, it's used to indicate whether someone is passionate, vibrant, or determined. Or it could be used to indicate a well-known fire dancer. Either is a general possibility.   2. Well I could tell you, but that would be spoilers ;). Don't worry it will be reveled in due time.   Let me know if you have any more questions.