Have no fear, my love. When you kneel before the throne, I will cover your name in flowers.
— A Widower

Few things can put life into perspective quite like the death of a loved one. And while it may be comforting to know that all souls will meet again in Nesmerleth's halls, facing life without that person is always a painful process. This is true for all the peoples of Ior. Mourning traditions can vary quite a bit from culture to culture such as the First Ones who perform a ritual to absorb the memories of a loved one by consuming their eyes. Many tribes of trolls have the tradition in which the deceased's family will spend days or weeks without rest composing a song that perfectly represents their loved one and will never be played again once that loved one is interred in the earth.   Then some traditions are localized to a region. Many towns and cities have multiple races within them and must deal with their dead in ways that benefit the whole as much as possible. It is not uncommon for the unique cultural traditions to be muddled in these places where efficiency and safety take priority over ritual. And then there is Mourner's Vale. 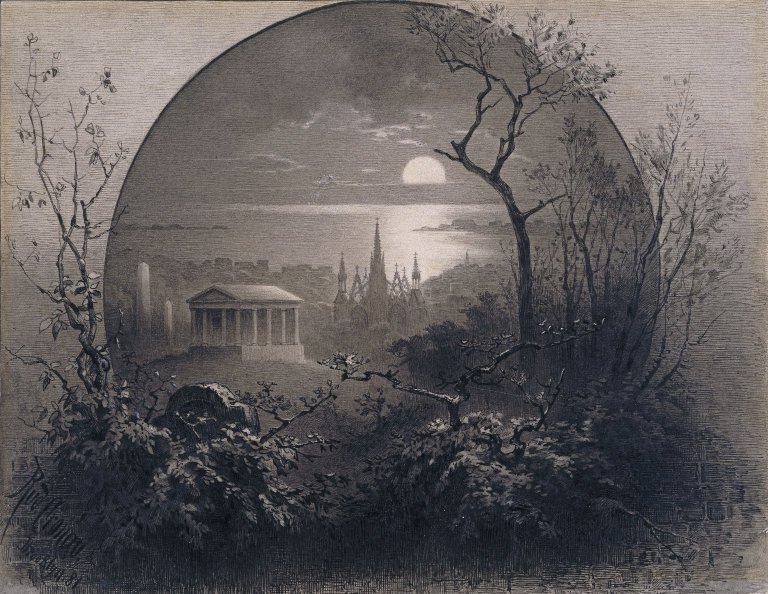 “View from Green-Wood Cemetery, Brooklyn,” 1881 by Rudolph Cronau
To witness the tiers of ancient mausoleums and rows of gravestones rising from the mist of the verdant valley, one could be forgiven for assuming this to be a ruined necropolis. In a way, it is. However, nestled between the various tombs, or sometimes built within them, are shops offering fresh food or farming tools. There are quaint and cozy homes built in rows and tiers around the graves yet they are so similar to the tombs, it can be difficult for travelers to tell the difference. Like any other town, the locals are farmers and craftsmen, yet they have adopted the fashion of mourners or clergy of Nesmerleth as their everyday garb.   How then, does one tell when a Mourner is actually mourning?

In many places on Ior, a particular flower grows in the fertile soil of cemeteries. Often referred to as the Weeping Lady or Grave Lace, these cup-like blue flowers grow on creeping vines and crawl their way up headstones and walls. In Mourner's Vale, they can be seen on nearly every fence, building, and tombstone. The names of those entombed are often obscured over time. Some see this as a sad thing, representing the dead being forgotten by the living. To the Mourners, it is a symbol of the soul of their loved ones being taken into Nesmerleth's embrace.   The tradition of the tasset came into fashion in Mourner's Vale as a way to honor loved ones who passed and a way for those left behind to heal. The tasset is a wide belt with a knee-length cloth that hangs from the front. Often this cloth is grey, the traditional color of Nesmerleth, but can be white. Black is considered to be an unlucky color, for it is associated with the Titan and the shadow. The name of the deceased is embroidered on this cloth near the top. Then, over a period of one hundred days, the mourner will embroider a vine and flower design growing from the bottom, usually in unique patterns, that will eventually grow to cover the name of their loved one.   This may seem pointless to some, as the name of the deceased will be covered forever, but the process is more for the living. Each stitch and pattern represents a memory shared between loved ones and allows the survivors time to accept the loss and remember the best parts of their life with that person. 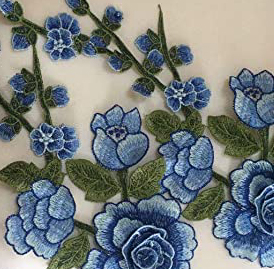 In the earliest days of the tasset tradition, the flowers were limited to Grave Lace with its vines and dark leaves. As it came more into fashion, however, people began incorporating other flowers or images to better represent the lost one. A favorite rose would weave its way between the pale blue weeping ladies, a bee could represent a life built together, or a white moth may convey a secret taken to the grave.   Once the tasset is finished, and the one hundred days of mourning have passed, most people will keep it displayed either hanging on a wall or draped on an altar for Nesmerleth. On days when the pain of the loss is strong or an occasion like a birthday or anniversary of the loved one, the survivors can take the tasset and wear it again and remember. Friends and family can sit together, comparing their tassets and reminiscing about their shared experiences. In this way, mourners can heal from the loss together and will always have something to remember the lost. 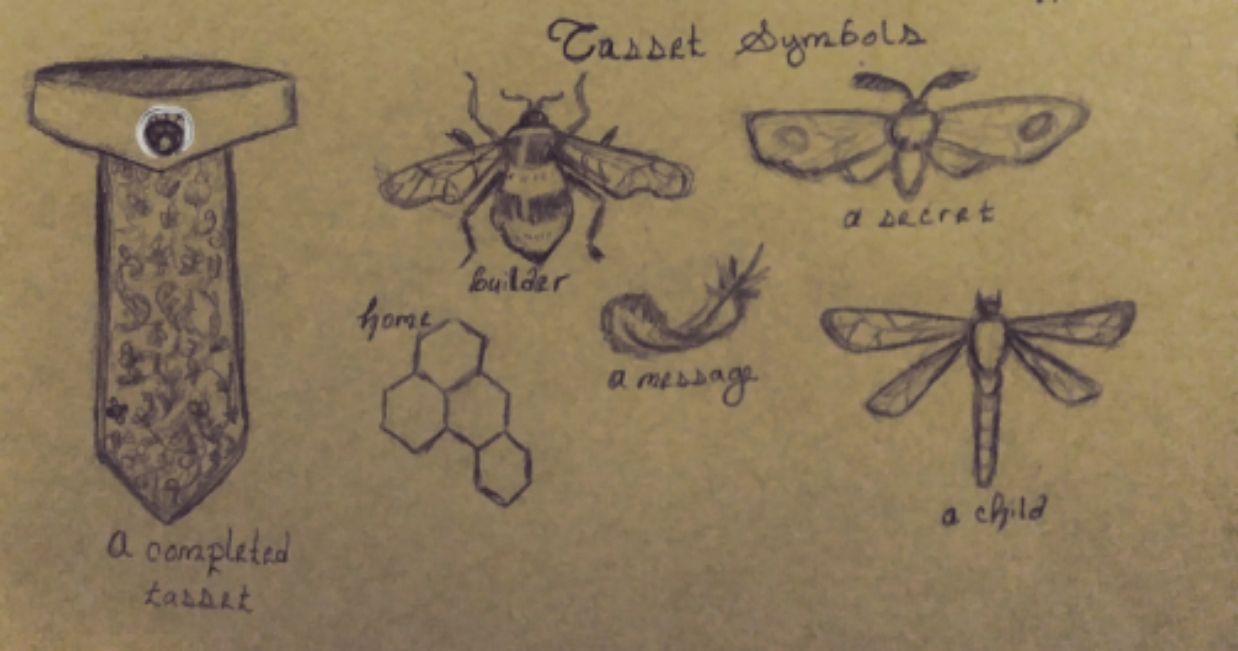 The tasset is mostly contained to the area of Mourner's Vale, but there are certain fashions from that region that have been slowly adopted in other places. The color grey is associated with mist, one of the primary symbols of Nesmerleth. It is said her throne is made of mist and that she uses it to travel the in-between. Some people hold the superstition that if one were to be lost in the mist they may accidentally cross over into her realm and be lost to the living forever. Because of this association, many ancient statues in graveyards feature flowing, gossamer layers of grey fabric to represent the mist. These layers, like skirts or veils, have been adopted as mourning fashion by many elves, humans, and people in the more urban areas.   The clergy of Nesmerleth will often be seen in grey flowing garments, sometimes with veils obscuring their faces, and occasionally with grey armor peaking from beneath the layers of their robes. They will always have a representation of Nesmerleth's crown on their person, such as an amulet or ring. When a funeral is held, in some regions, the priest or priestess will wear a replica of the crown over their veils. 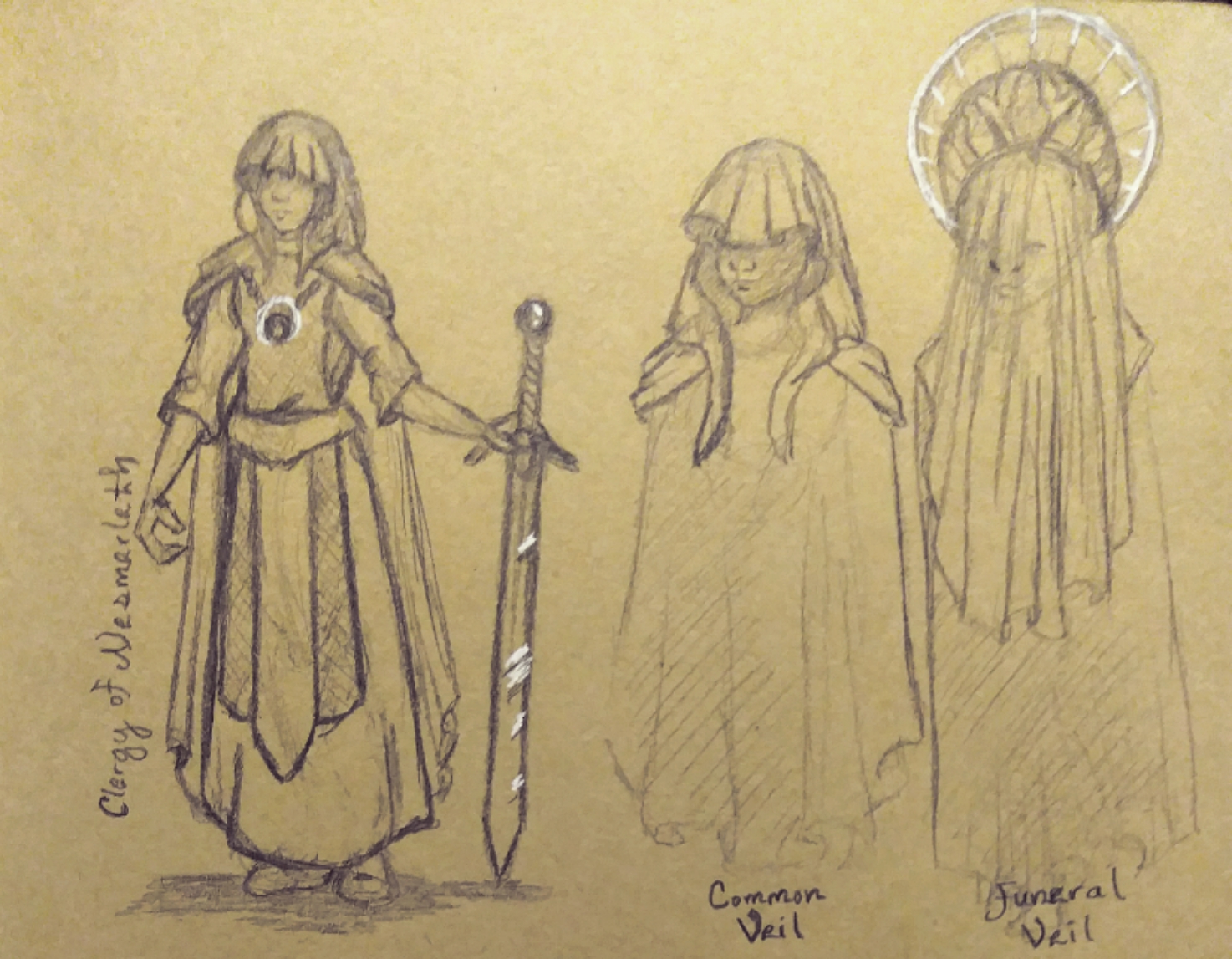 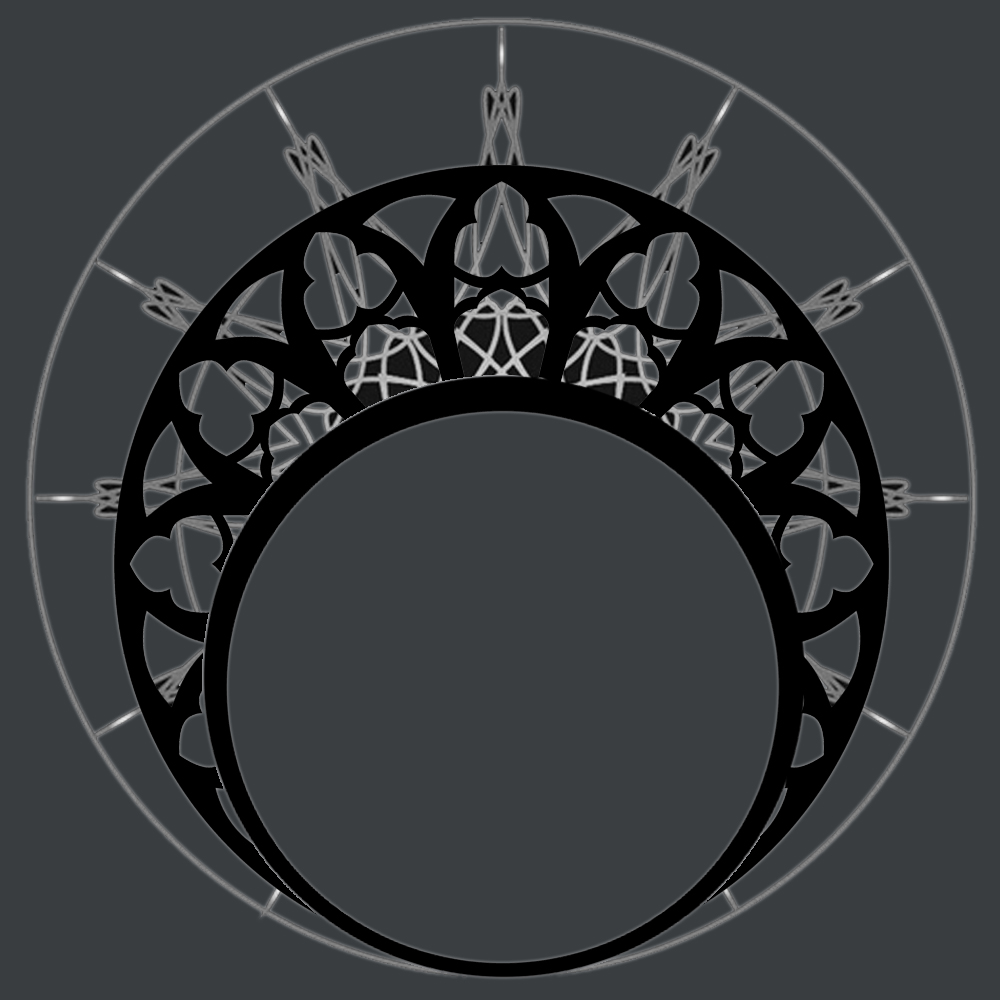 Crown of Nesmerleth by Kayla Perisho-Denley
The symbol of the goddess of death, worn by mourners, judges, and the clergy of Nesmerleth.
Item type
Clothing / Accessory

A Note on Fabric

Generally, mourning clothes are made from durable cloth which can be easily dyed like wool. However, every few years the trend towards light, airy, and flowing cloth gains popularity. People will prefer to make their veils and tassets out of thin silk or gossamer during these trends. These garments don't last long, though, and eventually, people lose interest in these fabrics.
Ior

Images: Artwork (C) 2020-2021 by Kayla Perisho-Denley, unless otherwise stated. All rights reserved. Stock art and cover images from Pexels is licensed as Royalty-Free (RF) without attribution except where stated otherwise. Some cover images (C) 2020-2021 Kayla Perisho-Denley
This is a work of fiction. Unless otherwise indicated, all the names, characters, businesses, places, events and incidents in this article are either the product of the author’s imagination or used in a fictitious manner. Any resemblance to actual persons, living or dead, or actual events is purely coincidental.
(this World is a work in progress, please ignore the scaffolding as we construct it)
Article template
Item
World
Hallowed Legacy
Category
Ior
Author
Ellysium
Publication Date
5 Jun, 2021
Creation Date
13 May, 2021
Last Update Date
7 May, 2022
Visibility
Public
Views
982
Favorites
21
Comments
6
Work In Progress

Nice concept! I like the vine they embroider that grows that eventually covers the name. People living between the graves is pretty unusual :p   "Ones who perform a ritual to absorb the memories of a loved one by consuming their eyes." I am uncomfortable now :p

Oh really like the new images you provided ^^ The outfit looks pretty cool in the last image!

Eating the eyes of departed loved ones... such a nice tradition... XD The song one does sound nice! And the embroidering of the belt also sounds like a very nice and unique tradition, I really love that idea :D What do they do with the belt afterwards?

Thank you! I added more to it, since there's still time. But they keep them displayed on a wall or altar.

Those are lovely additions ❤ and great images, I love those flowers :D

I love the belt tradition - it's honestly so poetic and beautiful, and having a concrete piece of clothing that the family/friends of the dead can compare to each other's is just really sweet. Plus the aesthetic of blue flowers covering the name of the dead is just so nice. Great work and interesting worldbuilding!

I like how this tradition focus on helping the living to heal and the concept of the tasset. It's also very interesting, there is a complete town in between the graves, but i like it.

Thank you very much! I love Mourner's Vale, I'm currently working on an article all about it!

That is a beautiful way of grieving and letting go, I really just love it!

Thank you! I'm glad you liked it!

Funerary customs can get really maudlin really fast, but you do a terrific job of keeping things interesting while also keeping them respectful. And you really piqued my interest with the notion of troll songs in the opening.

Thank you! As a Proper Goth (TM) I find funerary customs fascinating and Nesmerleth is my favorite god in this setting. So I've thought a lot about how different races would handle death. Now that I am done with my break, I plan on expanding the races and their customs as much as possible, so there should be more info on the Trolls in the near future.