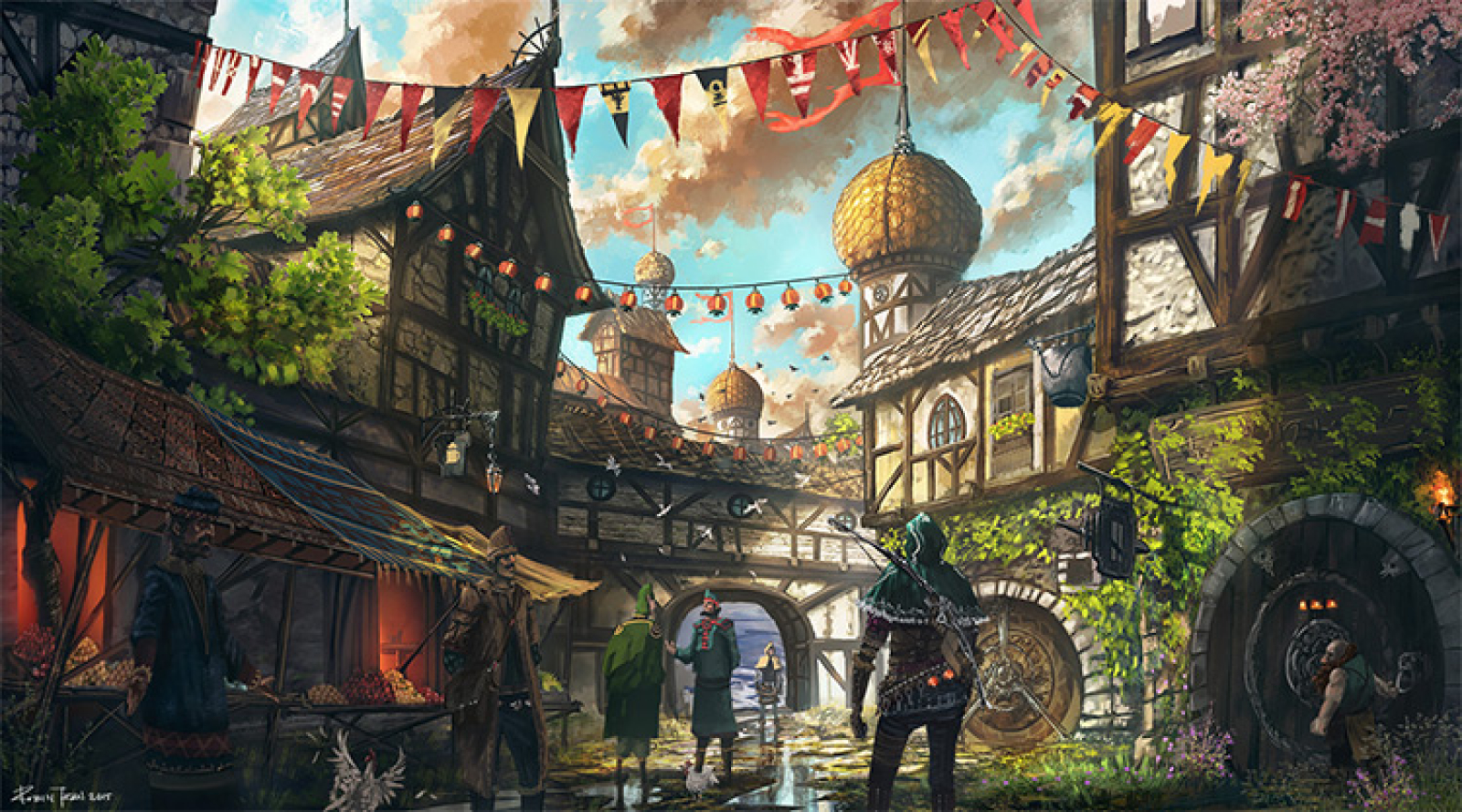 A rising town at the Vernal Continent, The Town of Tranquility and Adventures, also known as the Village of Agriculture and Trade back then. Earínos was a village that has great agriculture and trade which is now a remarkable town because of both. The home of humans and elves, but it is also the home of the seventh king of the continent, King Whillam II.
The town is known for being popular on trading silk, wool, and fur throughout the continent. With the marketable trade, enjoyable traditions, fascinating culture, delectable cuisines, and the hospitable people living here, it is already have taken note that Earínos will grow into one outstanding city. Despite Earínoxians being in a worst state possible, they will always find peace and happiness even though thick and thin.

The residents of Earínos are mostly humans, but there are some elves which started this town to also have Half-Elves. With the population of the settlement roughly being one-thousand five-hundred people, most of them are permanent residents. Because of the calming beauty of Gratinin Plains, there are some people who are only temporary residents, and most of them became full-time residents. As of now, most of Earínoxians are farmers, traders, adventurers, and hunters. Despite them working in farms or trading, the majority of people's wealth class are middle class.
There are also famous people who lived here, for an instance King Whillam II the seventh king of Therismòs, Juliana Ellens the prestigious chef of Queen Christina Astrios from the Aumtial Continent, and Knight Azirhea Triscyne a female elf who ended the war between the Vernal Continent and the Onjeón Continent.

The Leaders and Co-leaders of the Adventurer's Council and Thea Cerezs both governs the town, but Thea Cerezs currently owns the town. While the Adventurer's Guild helps with the taxes of town, Thea creates the law for this town, and she also helps with the problems of her towns people. There are no other problems here on this town except taxes and some hostile species that has been calmed down by the people who joined the guild.

On Earinos there are watch towers on the west where the Adventurer's Guild is and one on the south-east which is also where the windmills are. The walls that's protecting them is made of stone and concrete to protect the town for high leveled hostile species and it is compact enough so that the Earínoxians can buy some time to hide. Outside the stone wall there's the wooden barricade that is tied together in a two by four placed diagonally to push some low leveled enemies away from town. There are also very sharp spears hidden near the wooden barricades.

Earínos is one of the towns that was popular because they are known for their trade. They have a Floweret Sheep farm that they utilize for trading and a nearby lake that is the source of the clay that is traded around only on the Vernal Continent. Because of their trade which helped the economy of the continent that they are on, this village became a very known town. Another thing is that they have an official building for the Adventurers Guild which they only have seventeen verified buildings where you can be an official adventure, though Earínos is the only place in the continent with the verified building. Other than that, Earínoxians are known for them being one of the best farmers around the Vernal Continent. They also used to create ships and boats for Ezherhians.

The farms of this settlement is their primary business, and they have accomplished multiple things because of it. As some people may have noticed, they are able to maintain their economy and starvation is declining ever since they are donated by the OFAA. When visiting around the town, the town square is where many merchants and traders are. From animal produce to traded goods, Earínoxians are known to have various commodities and products.

Because Earínos was built on the village that was destroyed after the massacre, they have the most valuable information about the war that came after the massacre on their last world and most of the artifacts and relics that are left here was used for private researches. It is stored somewhere that all Gixírians didn't know, even most of the people living here doesn't know. They are the ones that has the material which is almost traded all over Gixíra. Earínosians with Ánthonisians are known for the clay that's used all over Vernal Continent. Other than that, they know the real story of the popular legend, What Lies on Lun Tian.

Back then when it was before war that happen of the last world, this place used to be a town that is vibrant and cheerful. After the asteroid that hit the super continent which now consist of nine continents, a group of people discovered a ruined place. After they discovered the ruined town, they started a mini village then after that people have starting to get around the world and start trading which cause the start of this small village into an official town. This town also started as a mini village as the same time as Ánthos.

When this town started they primarily focused on farming, so that in the future they can have a surplus of crops. As time progressed, people from this town's population has increased which means more people to be fed. With the people finding water energy cores, the farms have been expanding and developing. With the town having an abundance of fruits and vegetables, they started trading their crops and materials from their livestock. After ten years of agriculture and trade, people from the Vernal Continent and outside the continent have taken note about the hardships that this town made through. In conclusion, this town became known to be the second best town of the Vernal Continent, and the fourth on the ranking with the most trade.

People here uses a mix of hay and clay for their houses and roads, it is the reason why the base color of their houses are mostly gray. The roads are made from the mixture they made that wasn't a perfect rectangle when hardened. The Water Fountain of the Past and the buildings nearby the Tree of Opportunity are purely made of lime stones, because both structures are blessed by the goddess Irva, The Goddess of Spring. The color of the roof depends on your wealth, the color is ocean blue (Upper Class) to pure white (Middle Class) to gray (Lower Class).

Earínos is seen at the middle of The Serene Plains with the town built around an enormous tree which is also at the center of the plains. From the south-east of this settlement is a lake where most of Floweret Sheep lives, and it is one of the most known place with multiple animal farms. On the south-west area, there is a mountain range where and a boreal forest where a town of elves live. The river is the only water supply they have to drink and it was also one of their source of irrigation, and further more it separates Earínos from it's twin settlement Ánthos.

There are multiple Floweret Sheep for them to collect more Floweret Wool because the species would most likely to live at Gratinin Plains, so they exploited this information to have more wool to trade. Just like the wool, animal products nearby are scavenged and gathered to be used.
They cultivate the soil from the grassland surrounding the place to make multiple farms which caused Earínos to be one of the settlements with farming as their major way for income. As this settlement has hill chains that surrounds the town, they use the hills for mining ores and minerals. Earínoxians utilizes the clay from the a lake, for the material to be traded, so that people can use the clay to build their houses and roads.
Nearby Settlement(s)
Ánthos
Ezhers
Nearby Monument(s)
The Pillars of Lentian
Alternative Name(s)
Town of Tranquility and Adventures
Type
Town
Population
1407
Inhabitant Demonym
Earínoxian
Location under
Gratinin Plains
Owner/Ruler
Thea Cerezs
Owning Organization
Adventurers Guild
Related Materials