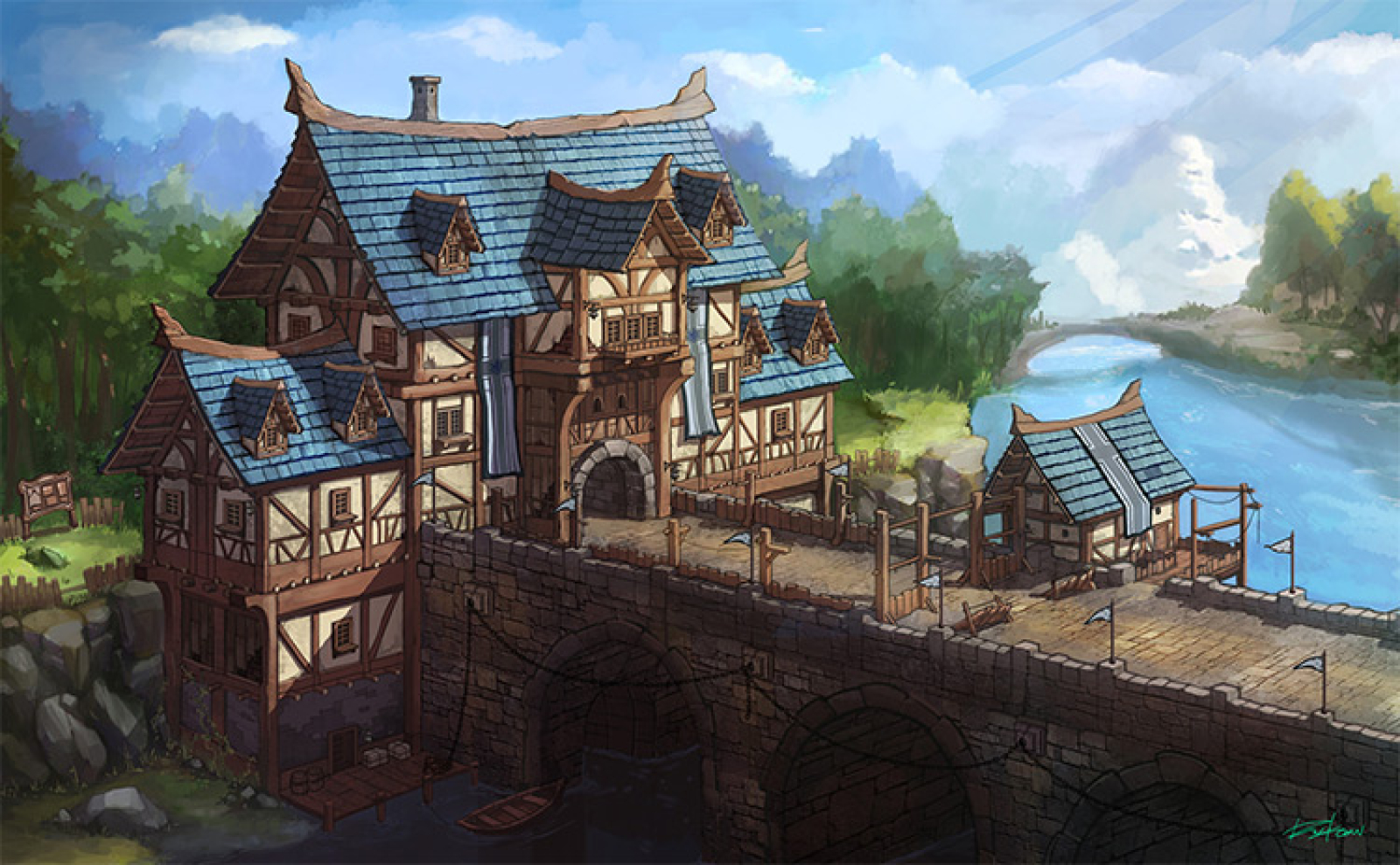 Ezhers is a village built by the town of Ánthos for them to have a place to teleport to get water and build ports. The people of this place is a mix of Ánthonisians and Earínosians who have been now known as Ezherhians.

Within reason that this settlement is between three types of bodies of water, the walls of this village tall enough so that there are no floods are happening in this settlement. Because this place has an agreement with the town of Ánthos and Earínos that there should be now war between all settlements, there are only two watch towers in this village. One near the ports so that they have security about the ships on the port and one near the iron gate which is the way in and out of people in this place. The walls of this place is covered with poisonous pollen for Winter Lilies so that hostile creatures can never get though the settlement except the iron gate which is always closed for increase in protection. One last thing is that there are sharp barricades all around the walls of Ezhers and the wall and this barricade is only seventeen centimeters apart from each other.

People from this village have ports and they use this one way for their income. While after the trade happened, they would only have one-third of the items and money that is given after.

While the leader Ánthos can command the trade ships if the trade is fair or not, all of the people here in Ezhers they are the only one who can vote if the items that is traded back is fair to the item that they are trading. They have a library dedicated to the history of all the settlements and geographic locations near this village which people go to when they are learning about the history of a specific place. And because of the very long passing years of Gixíra, they practically own the trading ships and fishing boats that the Earínosians made.

This place was supposedly built only for ports which is mostly used by the twin towns, but on the last minute they decided that they would build the port with a village. This village was build mostly by people from Ánthos which is why this village is mostly owned by Ánthos. Both of the towns thought of building a village here because there might be no one to keep watch of the ships which are built by Earínosians which started the history of this village. After three years, this village was given it's name which is approved by the king of Therismòs and on the fifth year this settlement was built they created an agreement that the town of Ánthos, Earínos and the village of Ezhers should not engage into a war with each other which is given a positive feedback and answers by both of the towns.

For the town being near the lake which is the place where people from Earínos get clay, Ezherhians use this clay for their buildings and wall. Because of their alternative name which is The Village of Water, their houses and buildings have a little tint of blue to a very oceanic blue color. The more blue the building is, the more important it is for example, the houses of people who's blood comes from the people who helped the growth or created and impact in this village has a cerulean blue colored house while the building which is here since the start of this village like the port has an oceanic blue color.

The terrain that this town was built on the north east of Krōuha Tundra which is still cold, but it is not as freezing like the town of Ánthos. They are also near the river and lake which makes them have a very accessible place to get fresh water, it is also where the Earínosians get their clay. This settlement is also near the sea which they use to create salt. In conclusion, this place is built in a tundra and is near to three types of water bodies which is the reason they got their name "The Village of Water."
The cover photo made by Sihun Park
Alternative Name(s)
The Village of Water
Type
Village
Population
673
Inhabitant Demonym
Ezherhians
Location under
Ánthos
Owner/Ruler
Mercelito Guian