The Kaphya are related to the Rall people of the Armorcan Peninsula. Unlike the Rall, they remained nomadic herders much longer, thanks to the unforgiving environment they lived in.

They have many cultural traits in common with the Rall, such as their patriarchal structure that still affords many rights to women and the value they place on wisdom and knowledge. Unlike the Rall, the knowledge they value is more likely to be history and knowledge of the natural world, due to the fact that they have little access to books on science and philosophy.

Kaphya typically move twice a year, between a winter camp and a summer camp. In the winter, many families gather in large villages, with houses made from mud and stone. The houses are built upon raised wooden platforms to avoid the permafrost and create a cold sink below. The long, frigid winters are a time for telling stories around the fire, weaving, building tools, and building relationships. 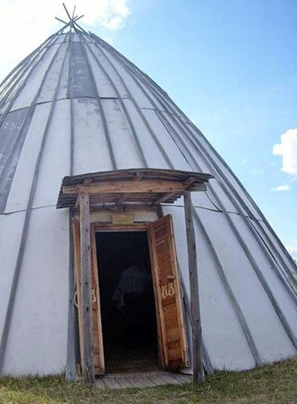 Urasa by Museum of Friendship
Come summer, the villagers scatter. Summers are very short, and they must make the most of them. Summers are a period of hard work, with very little time for socializing or relaxing. Many of the men go far south to take their herds of bison to graze. Others focus on fishing, hunting, and growing what food they can in the short season. The majority of this food will be salted, dried, and saved for the long winters.

During the summer, they set up temporary camps. Their homes are made from timber frames with birch bark walls. Families go to these summer camps together. A few families in a village might specialize in fishing, others in hunting, others in trapping. They travel together and focus on their niche throughout the summer, and then bring their spoils back to the village to share.

Kaphya see the warm months as a period of hard work, and look forward to the long, dark winters as a chance to enjoy the spoils of their hard summers. Although the temperatures can easily drop to -50 degrees Celsius, the stockpiles of supplies gathered in the summer help them see it through. Winter is when people get married, it's when women prefer to give birth, and it's when the majority of their cultural events happen. The most important of these is the Autumn Reunion Festival, when all the scattered families return to their home village and have a three-day festival to celebrate all their hard work in the summer.

This traditional social structure began to break down after the Valaran Empire took over their territory and many Kaphyan people became subjects of the empire. Frontier villages of Rall people began attracting young Kaphya who wanted to see the rest of the world and expand their knowledge. Many of them returned to their villages after spending their young adulthoods in the big cities, but many others never came back and were absorbed into larger Rall culture.

After the fall of the empire, those frontier villages were abandoned and it became harder for Kaphyan people to get a step into the city-states farther north. They largely continued their summer-winter nomadic cycles, although every year, a small number of young adults leave the villages to experience the rest of the world, and only some of them come back.

Kaphyans are sometimes known as the people of the mammoths due to their use of tamed mammoths as working animals. Each village has a handful of mammoths, with the number of mammoths being an important indicator of a village's overall wealth. They are occasionally traded between villages, but a single mammoth is one of the most valuable things to be traded. The mammoths belong to the village collectively, not to any individual person, although most mammoths have one or two people who look after it specifically and have a close bond with it. 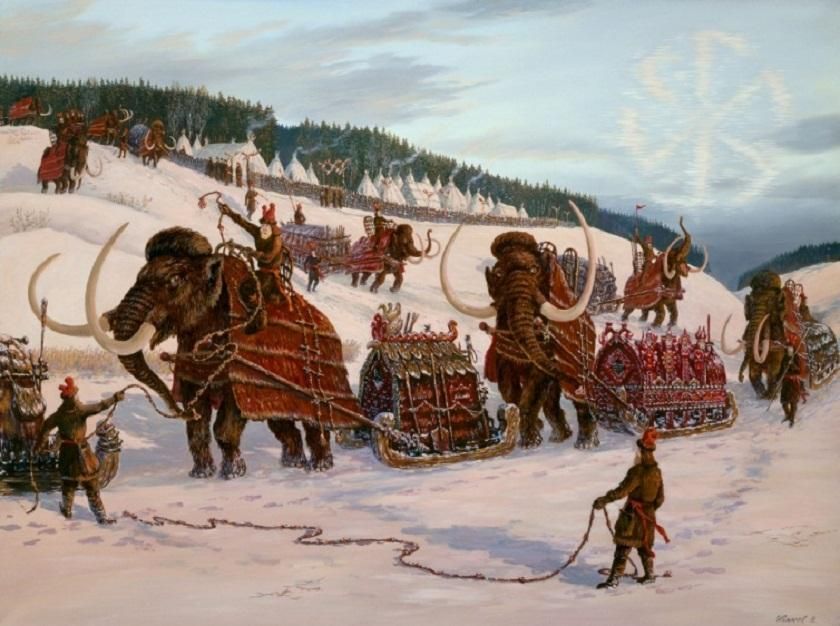 At the Age of Indra by Vsevolod Ivanov
In the summer, when the herders take the bison to graze, they ride mammoths. The steppe bison are incredibly large and dangerous to wrangle on foot. Sitting atop a mammoth lets the herder get above the heads of the beasts and more easily corral them. Herders often ride the same mammoth all summer, year after year, and can form close bonds with the animals. Mammoths are also useful for carrying supplies, as they can carry huge loads with ease. After the herders depart with the bison, the remaining mammoths in a village are distributed to the various families based on need, such as who is travelling the farthest, who has the most to carry, or who is going to a densely forested area where a mammoth would be useful to clear camp.
Even after death, mammoths are useful to the Kaphya. Their tusks are re-purposed into digging tools or weapons, their bones are used as supports in making tents, their wool is turned into clothing, and their carcass provides large amounts of meat. Mammoth meat is eaten if it is available, but they are never killed for their meat. They are more valuable alive, and they hold a beloved, revered part in their culture. Eating the mammoth upon death is a way of honouring it and not letting its life go to waste.

The Kaphya language is closely related to the Rall language, and the two are mutually intelligible if spoken slowly and clearly. For most of history, they did not have a written language. This changed after their land was taken by the Valaran Empire, and they adopted the Rall alphabet.

Kaphyan people have very different clothing depending on the time of year. In the winter, their clothing is dominated by fur. Their heavy furs come from deer, rabbit, or woolly rhinos. They are often decorated with embroidery or beading. The patterns can become quite elaborate, as they have all winter with not much to do.

Other than furry pelts, their preferred clothing in the fall and spring, when temperatures are not quite as freezing, are wool sweaters made from the hair of a woolly mammoth. One of the last things the village does together before departing for their summer camps is to sheer their mammoths. They then treat the fibres and leave them lying in the sun throughout the summer to lighten the colour. In the late fall, they return to the village to collect the spring's wool and begin the winter task of preparing and weaving it into sweaters.

Their summer clothes are much lighter, and usually made from tanned hides or, in the past few centuries, imported cotton from the Valaran Empire. They like to trim their clothes with fur even in summer, because it is never too hot to handle it and they like the fashion.

Hats frequently sport huge horns, inspired by the giant horns of the steppe bison. These large, impractical, horned hats are worn during festivals and ceremonies, especially by those of high status. They do modify the design to be more vertical, so that they don't smack their neighbours in the face every time they turn around.
Geographic Distribution
Between the mountains and the sea in southeast Cuyania, just south of the isthmus linking Cuyania to Kaabara. They live in the taiga area, south of the denser boreal forests, though they often travel there in the summer.
Parent ethnicities
Related Organizations
Peoples of Armorca's Forests