"Through centuries of oppression we've been sheltered and warmed by Luthic's hearth. After so much suffering, is it too much to ask for a land of own?" -Brogg the Accuser at the Treaty of Iverburg proposing the creation of Broggfey, 898, 4th Cycle.

Similar to elves, orcs have been known to intermarry with nearby races wherever their territories are. Powerful fighters with a strong sense of justice, half-orcs have come in many shapes and forms over the centuries. Although the typical half-orc is thought to be partially human, there are recorded cases of half-orcs with dragonborn, goblinkin, dwarven, and even goliath blood. Many half-orcs have flocked to the newly founded oricsh nation of Broggfey in Southern Pescat, but others have chosen to travel the world as adventurers to show the world what orcish people are really like. 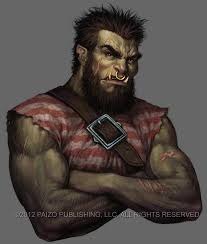