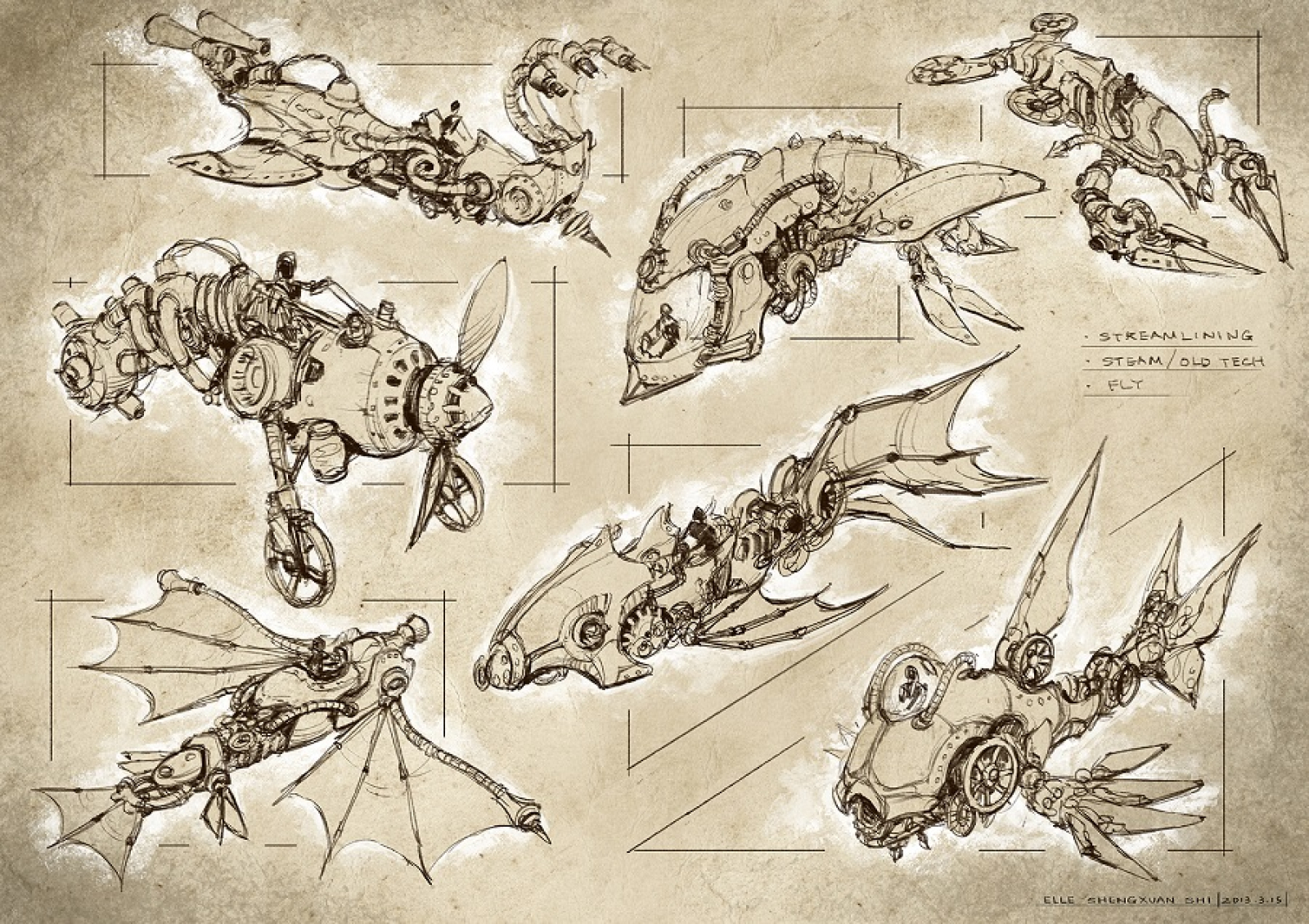 The Thopter 880 is a new design in a breakthrough field of Airships technology. Created by the dwarven Gerasmith Grym Hammersmith and the elven mage Raervyn Halloran, the Thopter 880 has no steam engine to power her. It starts on a crank gear system, but the medium sized craft wouldn't get very far on that alone, barely being able to lift off the ground. No, the main power system in this hybrid airship is magic. Never before has technology been mixed with the untamed elements, and it took many a try to get the exact formula correct in Grym's hanger.

What's in a name

The Thopter 880 is an amalgam copter and the rare magical bird of legend, the Thunderbird. Thunderbirds carry the element of wind and water with them at all times. No one knows where they came from, but everyone has their guesses: The elven scholars say that they come from the high skies, living far above the cloud banks out of sight of even the far reaching eyes of the elves; while the scientists from the Nation of Anor say that they were born of thunderstorms, being charged by the strikes of lightning that they seem to be immune to. The Thopter 880 reflects some of these characteristics, being able to fly higher than most airships of its size, and able to channel the lightning energies of the Magus that powers it.

The Thopter 880 has a unique copper threaded turbine held under the magus seat in the stern of the airship. The magus sits down and recites the spell for lightning and releases the magic through the handle they hold to feed it down into the metal tubes that carry it to the secondary turbine pods, spinning it and generating power to the gears and cogs, making lift possible.

The Thopter comes equipped with both blades and fabricated wings. The wings of the Thopter aren't for making it fly, they are mainly to power the gauges and other systems, yet they help stabilize the ship as the blades keep it moving. The lightning feeds the propulsion and makes the gear engine whine, thrusting ahead on the magic. The wings do actually flap, giving it an eerie appearance to say the least.

The dwarven metal plating on the sides help add to the structure of the airship, and the bottom is layered with silver/copper alloy.

The Thopter 880 has gauges and sensors to measure air pressure, velocity, weight, and power capacity.

Emergency crank system that when built up ahead of time can be used to land in emergencies if the magic fades too quickly. 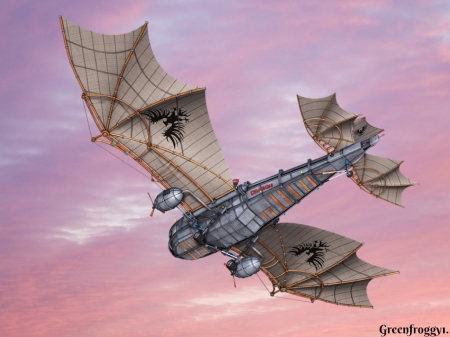 A different design was originally tested, yet the name was argued about too much. The Fopter was designed to use fire to create steam but the coils that were used burnt out too quickly, which also spread to the fabricated wings on occasion. Air was considered as well, yet channeling it through the handle was all but useless. Lighting was the only form of high energy that seemed predictable (strangely enough) and so the hybrid was concieved.
Class
Airships
Nickname
Thopter
Owner
Grym Hammersmith
Related Professions
Rarity
Unique
Beam
Three rotor blades, two on the small turbine tanks, and one copter blade on the top
Length
40 ft from bow to stern
Height
10 ft
Weight
2,500 lbs
Speed
full charge, the Thopter 880 has reached a top speed of 55 MPH which is a little faster than any ship near its size.
Complement / Crew
The Thopter 880 needs a crew of at least 2. A captain to steer the ship and a Magus to power the copper turbine in the stern of the airship that feeds down to the separate two turbine pods.
Cargo & Passenger Capacity
The Thopter 880 can hold up to 5 other passengers seated up top, and has a cargo hold able to carry at least 200 lbs of frieght.

Ooohhh I like it. Hella unique. Is this whole world airship themed?

not really, more like magepunk ( I call it Steamblade) it has airships, gearwheels (cars) and Gerarails (trains) as well as elemental magic, swords, and faeries. thanks for the Like!

I love the additional detail regarding the development process in both Different Elements and What's in a name; it's a subtle step that, to me, makes the information more 'alive' than a straightforward listing of statistics and descriptions.

Thanks! That means a lot to me.

Wow, a thunder Airship is really original! Why exactly are the spare Thunder Bolts not used as weaponry? Are they too weak after leaving the engine? Or are they just not needed?

They fade over time and what's left presumably gets released into the air around the ship giving it the look of the magical creature. Thanks for the comment you rock!