The Daemon Impus species of demonkind, referred to as an 'imp,' is a diminutive class of demon with negligible physical strength, but with uncommon intelligence. Scholars theorize that in the Realms, imps have survived through symbiotic relationships with more physically capable demons and outwitting more dangerous classes of demons. Imps are a common demon for fledgling warlocks to summon, but are not considered useful in combat except for the winged imp breed. 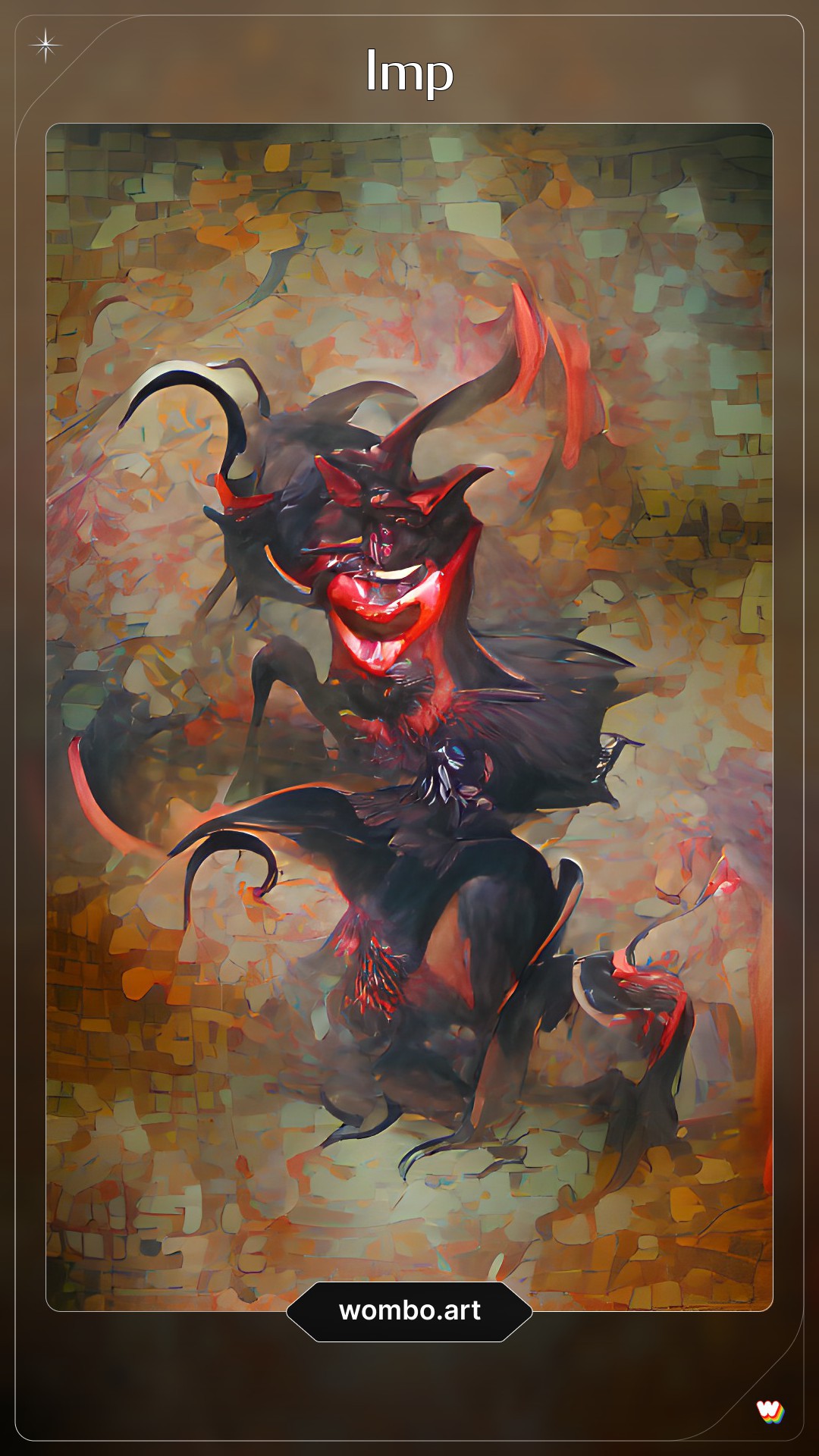 Imp by Wombo ("Demon Devil Imp
Cackling Dark")
Imps are generally considered one of the lowest classes of demonkind due to the classification system's dependence on combat prowess. The limited physical form of an imp, being at most two feet in height (excluding the ears and tail) and a mere thirty pounds in weight, does not allow it to take part in physical combat readily. All imps share a scrawny frame that clearly exposes their limited muscles and, more prominently, bone structure. Their skin tone ranges from deep browns and blacks with tones shifting towards red or green. Warlocks, helpfully, identify the most common colorations as "puke green" and "plagued mud" referring to two specific shades between green and brown.   For their size, imps have unnaturally long hands and feet, both of which end in clawed digits that are surprisingly dexterous. Though their true height may approach two feet, all imps adopt a hunched posture that arguably is closer to a crouch. Most breeds of imps will use all four limbs to move faster, similar to a cat or dog, rather than relying purely on their legs like humanoids. The exception is the winged imp, which will fly at considerably higher speed than its landbound brethren. Imp wings can reach a wingspan of up to about four feet and are believed to carry a naturally occurring magical effect that assists in keeping the imps aloft. In general, imps have soft, spaded tails that extend another 12 to 18 inches behind them. Though prehensile, they are too weak to accomplish all but the smallest tasks.   The most recognizable portion of an imp is the head, which is far larger than expected for its frame. Referred to as bulbous, imp heads are narrow side-to-side and longer front-to-back than similarly sized humanoid heads. The ears are long, usually a full six to eight inches in length, usually pierced with small iron or silver decorations, and end in a point sharper than that of an elf. Imps also feature prominent noses that protrude several inches from their face and hook slightly downward, nostrils approaching long slits rather than simple circles. Similarly, the chin also protrudes more severely than in humanoids, but not as much as the nose or ears.   The standard expression for an imp is a grin, flashing a series of pointed, white, interlocking teeth that contrast sharply with the darker hues of their bodies. (Scholars are unsure how imps maintain such a white veneer to their teeth despite advanced age, but have yet to settle on a cause.) This expression is the origin of the idiom "impish grin" associated with conniving and mischievous intent, two adjectives appropriate for imp behavior.   Lastly, imp eyes are very large, even by demon standards. Varying from pure white to shades of muddy yellow, the sclera outsizes the iris and pupil by a considerable margin, giving imps a mad, crazy-eyed look by humanoid perception. Pupils dominate the inner part of the eye while the iris resembles a thin colored ring that ranges from golds to greens to reds, usually brightly colored. Though imps do have eyelids, they seem to have far less of a need to blink than humanoids, causing many discomfort from their stares.

The Warlock's Registry (WR) provides the most complete information for magical scholars to assess the population trends of demonkind. Based on anatomy and morphology, four breeds of imp have been identified:

As with all demonkind, imps are capable of seeing magical energy using aether sight, but warlocks find that an imp's sense of hearing and smell are more valuable. After all, warlocks are equally capable of aether sight whereas the sensitivity of imp hearing and smell can augment what the warlock already possesses. Beyond this, imps bring little additional value in this area.

Scholars have long-sought to understand the growth of demonkind, but it remains a troublesome area of study. Beyond reports from the early days of summoning, little evidence has been found of demons younger than a century in age. Based on the available information, imps reach their maximum size and growth before their hundredth year and little changes in their physiology beyond that point. Warlocks have summoned imps who have lived five centuries or more across all known breeds with the winged imp variety boasting the longest-living specimen at 1,020 and highest average lifespan at between 500 and 600 years old. Other specimens generally are between 300 and 400 years old with the longest lived salamander imp being 849.

The WR records that imps have a higher rate of transformation and hex magic than the average, with 100% of imps exhibiting transformation magic and 97% recorded as using hex magic. As with all demonkind, the rates drop significantly beyond these two, but binding is the next most common among imps at a rate of 10% (or 15% in winged imps). Unlike almost all other demon classes, there are no recorded instances of imps with evocation ability. The overall decline in spellcasting ability beyond transformation and hex magic continues for unknown reasons.
Scientific Name
Daemon Impus

Don't think your imp has enough piercings? Want to jazz them up for the next party? Stop on by and the first one is free!   I really can't understand how this is a thing. What's happened to the world...


Soundtrack by SK Kage (via AIVA.ai)

Seductive, sensuous, supple, and other 's' words that spell trouble.