The fastest way to cross the Valley

The Skycycle Transportation System is a system of ropes and bike-like transport vehicles which help the inhabitants of Kloevenlev to get out of the Kloevendal faster. The ST-system also enable the inhabitants to travel from one side of the valley to the other without having to go around, which saves a lot of time.

In the beginning, we were all quite distrustful of the transport system. It seemed unsafe.
However, the Clover Chief ensures that it is maintained often and that we improve it when we have the opportunity.   Recently, one of the young magic users enchanted the roped to make them more sturdy!
— inhabitant of Kloevenlev

Transport in the Valley 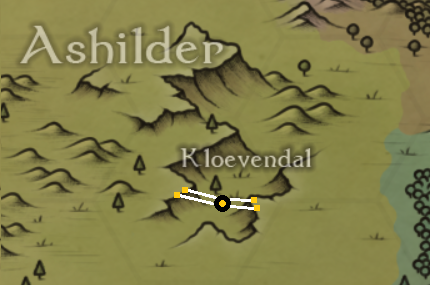 by Dhelian
The ST-system is quite complicated compared to other things the people of Kloevenlev have invented.   It is comprised of 4 stretches of transport rope, a station platform near Kloevenlev and 4 platforms at the ends of each transport rope. Additionally, there are 4 skycycles, one on each stretch of rope.
The black circle with yellow middle indicates the location of the Kloevenlev Station platform. The station is a little way away from the actual town, just in case there's a big storm and it might topple over. The yellow squares are the locations of the four platform stations that are located outside of the valley. There are two stations on each side, located quite close to each other.   The reason that there's two stations on each side is so that there's a better chance of being able to catch a sky-ride back to the station you wish to reach.
However, it is still quite limited how many people can use the ST-system at a time and it is mostly meant for more important errands.
Nickname
Sky-rider
ST-system
Motto
I want to ride my skycycle, I want to ride the sky
Current location
Kloevenlev
Rarity
Unique

The item used to transport people along the transport rope is called a skycycle. It attaches to the rope at the top of the skycycle, and has an arm-like structure that stretches down and forms a seat. This is where the user of the vehicle is placed during the ride.   At the spot where the user's feet would otherwise dangle in the air, is a set of pedals. These pedals need to be spun around by the user. This is done by placing one foot on each pedal and moving the legs. This makes small wheels, which are placed in connection to the rope, spin and push the vehicle forward.
Vehicles