The creation of the Cycle helped make daily life easier for all the people of Crevice. The Kyren needed to create a calendar that would allow for celebrations and holidays to honor Cynosure and the Strata Council wanted it to make it easier on the businesses. Early in the history, the calendars were changed a few times and disagreements on how long weeks, months and even years were fiercely debated. The surface calendars were created by the stars in the sky, there is no such view underground and many different sources were put forward. Some were suggested they use food sources and harvesting times. In 375, the Kyren calendar was being fiercely debated since it seemed to change when a new Kyren was selected and was not consistent. The merchants were pushing for a standardized calendar, but each merchant seems to be submitting their own to meet their needs.

The current calendar was based around this poem written by an unknown author. All people and locations are made up and the names are meaningless.


Verra had seen the Vale
She ran and ran, would always fail

Dust would lift her, move her aloft
Up Through the shrooms she flew and hit Thine
He'd smile quite gently and swallow her soft
Falling to the Bellow, she was Elyn's to Find

She silently tip toed past the Norvin
It woke, but in the Yorup by Heren was slain
She would try time and again, but saw the Yorn
She swam with Crava as it drew her in

He would swirl with her down to the Krail
Brant and Brine would carry her through the Nexin
And Verra would find the Vale] At last, she would never again fail.

A student created the calendar for a school project and the school used it for one month. It gained popularity with the kids who liked to say the date as a story. Within the year it had spread to several schools and became an official school calendar. Merchants were forced to use it to work around the schools schedule. It wasn't until 410, that the Kyren officially approved the Vale Calendar and it has never changed.

The people will define time in the following syntax.


Novin Walks in the Krail

Meet me when Dust Runs in the Early Red of the Yorup.

The term year is still used to count the end of the calendar. There were some attempts to alter it as well, but the term survives. The term month is rarely used in common conversation although it is normally taught in schools when learning about the history. Time is usually referred with at least two parts.
Dust in the Red, Heren Crawls, Blue in the Brine, Crawl in the Yorn.

Years are usually only used by scholars and in government or merchants. They are very rarely used in normal conversation, but may still be written as below.

The new Kyren was selected while Thine Runs in the Yorn during 8,567. 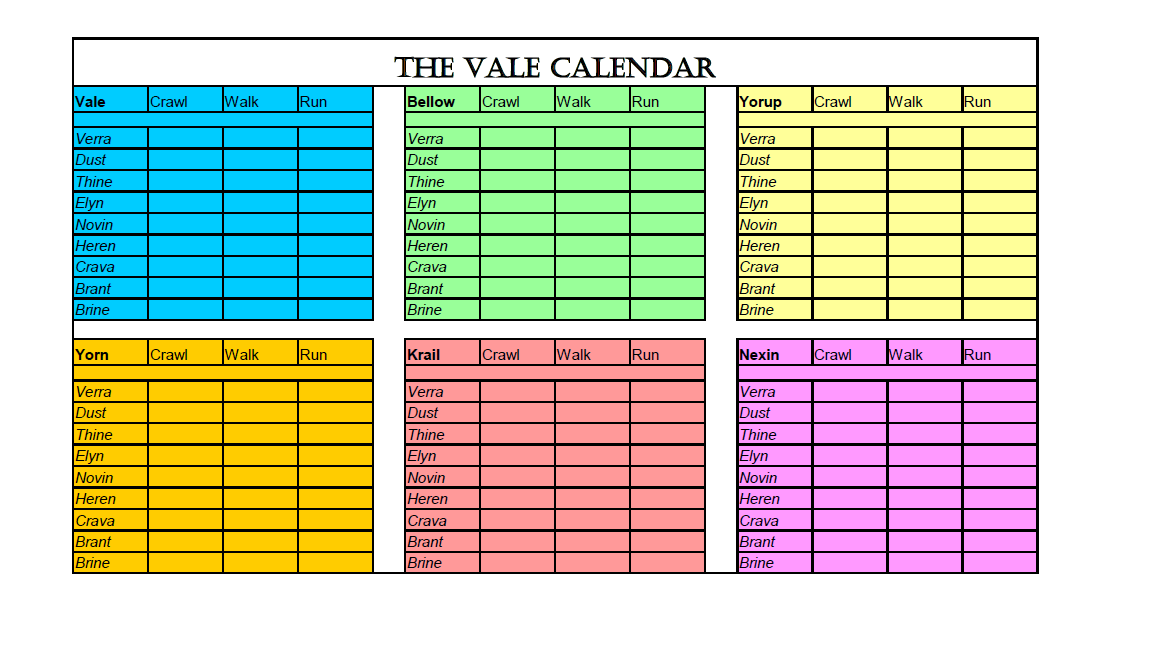