The War for Wallingwish Independence

The War for Wallingwish Independence (July of 6040-August 6047) was the first global conflict in Talamh's history. After a rebellion in the Wallingwish colonies sparked, the Lysandan Empire used their forces to try and put down the rebellion, but the Tallian Empire began to back the rebels, leading to blood shed that killed thousands. It led to a humiliating defeat to the Lysandan and Tallian Empires. The spark of this war led many to consider Talamh to be in a "New Age", starting the Second Age.

In the years before the start of the 7th millenium, Lysandus boasted the most powerful navy within the entire world, bullying other powers seeking to colonize the discovered islands of Wallingwish and Antillia. Eventually, the colonization efforts came head to head with their rival, the powerful Second Empire of Tallia. Lysandus claimed the Wallingwish Islands as their own, while Tallia was slowly taking over Antillia. Lysandus spent years having privateers attack Tallian ships within the colonial waters.   Then, in the year 6030, a skirmish of Tallian merchant vessels in Wallingwishian waters took place with the Lysandan navy. Lysandus prompted to try and close down the ports of Wallingwish to embargo Tallian trade. However, many Wallingwishians did contrary to that, illegally selling goods. The Lysandan Empire then levied heavy taxes on cities who were believed to still be participating in Tallian trade. The Embargo proved unpopular with the Wallingwishian people, and eventually was lifted.   However, soon another Tallian skirmish happened around the island of Sibis in 6035, leading to Lysandus to declare another embargo. Once again, the embargo enraged the Wallingwishians. Piracy began to become a real problem, and the Lysandan government began to prosecute anyone suspected of aiding and abetting the pirates. Patriots such as Jacques Maximillian, the Gothan governor of Port Royal, spoke out against the harshness of Emperor Richard VII's prosecution. Jacques was arrested for his "treason" and placed in a prison on the island of Sibis, which sparked mass protest within the islands. Then, in 6039, a protest turned into a riot within the Courtou, leading to Lysandan troops, afraid of the rioters, to firing at the crowds of protestors.   The Wallingwish Islands' governors assembled together in private at the city of Lethorp and declared that they desired to be free from the tyranny of the Lysandan government. They sent a declaration toward Emperor Richard VII, asking him to lighten his hand, or they would be forced to war. Richard VII did not take this announcement well, and declared war himself against the Wallingwishians in the July of 6040.

As the ships of Lysandus sailed into the Wallingwish Islands, a bomb was set in the prison of Sibis by Tallian spies, freeing Jacques Maximillian. The Lysandan government caught the spies that freed Jacques, and publicly denounced Tallia for an "act of war against the sovereign Empire of Lysandus." Tallia, now caught, formally issued a declaration of war against Lysandus, and sent weapons, ships, and supplies to the Wallingwishian rebels. Jacques Maximillian led the Wallingwish naval effort as an admiral, and hired former Lysandan privateers to fight on their side. Within a matter of weeks, Tallian warships were meeting against Lysandan ships-of-the-line.   Tallia, however, had one other trick up their sleeve. They bribed the Dwarf Emperor of Bolderun, Gilgrem, to stage a counter-offensive on Lysandus to retake Sibis and the southern regions of Albion. Gilgrem agreed, bringing the war to the continent. However, this sparked the Confederation of Gothai, allied to the Lysandan Empire, to defend Lysandus, so the confederation sent their armies into Bolderun to invade their western deserts. Thus started the War of Wallingwish Independence.

The war was largely based on naval engagements in the Althean Sea. Tallian, Wallingwishian, and Lysandan forces fought near the northern coasts of Carallinia and Wallingwish and south of the island of Sibis. There was limited land skirmishes, as the Bolderunian Dwarves tried to invade southern Lysandus, but were given a counter offensive by the Gothan army.

The entire conflict took place over a period of 7 years. The first moves were taken by the Lysandan Navy in July of 6040, who used their naval bases in Sibis, Anfeld, and Brymoor to launch a naval invasion of the Wallingwish Islands. The Tallians, station in Great Antillia, countered them by quickly taking the former colonies of Carallinia under their control once again. Control over the waters of Sibis lasted throughout the entire war, forcing Lysandus to play defensively on their penal colony. This distraction gave the Wallingwish navy enough time to defend their northern waters, leading to a series of battles near the island of Mordun that lasted for five years.   On the continent of Eiren, the Bolderun Dwarves pressed toward the cities of Silver Town and Morgeston, forcing the Lysandan army to defend their territory. They held the cities for a month, then troops from the Confederation of Gothai crossed over the southern Dragonscale Mountains through Percival's Pass, forcing the Bolderun dwarves to defend the cities of Hollengrund and Babash.   In the second year of the conflict (6041), the Bolderun Dwarves pushed back the armies of Gothai, and set out their iron navy, trying to invade Sibis from the north. Lysandus, busy dealing with Tallian invasions, was found defending the island from too many sides. This gave Admiral John Bannockburn, former Lysandan captain turned revolutionary, the ability to sneak around the Brookings Strait, where he defeated several Lysandan fortified cities and pushed them under his control. This maneuver was called the Brookings Offensive. This year, the Morgenston forces from Lysandus also engaged in a march around the Dragonscale Mountains and attempted an invasion of Hollengrund, but it failed.   The third year began a grand campaign by Gothan general Louis Bourguignon to march into the southern peninsula of Bolderun, staging a small naval invasion near the delta of the Silver River. This distracted the Bolderun navy to pull away from Sibis, freeing Lysandus of the third front they were dealing with. However, with the Brookings Straight liberated, Lysandus' Admiral Woodhame failed to get past the constant blockades by Admiral Bannockburg. Jacques Maximillian, in the meantime, held a national assembly and formed a mass militia within the islands to attack remaining Lysandan fortifications.   The fourth year went disastrously for the independence faction. A hurricane came over the islands of Carallinia, destroying a major portion of the Tallian navy, giving Lysandus an edge over their Wallingwish Islands front. With a lack of Tallian support the Bolderun navy was overrun by the Lysandans, and the land army was flanked on two fronts as the Morgenston Legion and General Bourguignon took the effort to overrun Hollengrund and soon occupied the dwarf city by the winter. That winter, however, Admiral Bannockburg began to employ privateers to destroy Lysandan supply shipments at Mordun.   Going into the fifth year, the privateer efforts at Mordun soon led Lysandus to take serious attrition at the island. Bannockburg sent their ships filled with General Jacques Maximillian's armies, leading to an amphibious invasion of the island. The Lysandans, starving and soon outnumbered by the shell shock, surrendered the island and evacuated their remaining troops from there to reinforce Sibis and the effort against Tallia. Tallia, meanwhile, started their own invasion of Carallinia, hoping to retake their old colony. This went poorly, as the Carallinians, who believed in the independence war effort of the Wallingwishians, believed Tallia was betraying the war effort. Thus, the Carallinians joined in mass rebellion against the Tallian Empire.   The retaking of Carallinia angered Jacques Maximillian, declaring that Tallia "breached the trust of the New Republic of Wallingwish", which was based on the old Tallian form of government before the days of their Deoser. Tallia thus pulled out of supporting the rebelling islands, and focused on retaking Carallinia and fighting Lysandus for the war. Bolderun also felt betrayed, and thus pulled out from the conflict, signing peace with Lysandus and the Confederation of Gothai. The tide of war thus changed in 6046, leading to Jacques and Bannockburg declaring that Carallinia was a brother in arms, and declared the Tallians as traitors to the patriot cause. Though New Wallingwish and Lysandus were far from allies, both agreed to now attack the Tallians, for they did not want them to take the Carallinian islands for new colonies.   Thus, the final offensive took place within the center of the Althean Sea, as the navies of Lysandus and the newly proclaimed "New Wallingwish" invaded Carallinia and fought off the Tallian land forces there. By the beginning of summer, the Tallians realized they were taking far too many casualties, and feared too low of manpower would mean they could not protect their Antillian colonies. Thus the three nations deliberated at the city of Anfeld. Tallia agreed to surrender to Lysandus, and Lysandus, heavily affected by their losses from the war, agreed to the independence of the Wallingwish colonies. (Realistically, Lysandus realized they created an excellent buffer state.) Thus, in August of 6047, the War for Wallingwish Independence was over.

After the conflict, the Wallingwish Islands saw a minor invasion by Mind Flayers, that was stopped by the Champions of Maclir in the year 6056. The following years, a privateer named Alexandroth Hapsburg created the Capricorn Colonial Company, which created great problems for the islands by being backed by Tallian gold and creating an organization of privateers. Hapsburg's efforts also led him to taking the Brookings Strait, attacking the weak republic for pirate autonomy.
Conflict Type
War
Battlefield Type
Naval
Start Date
6040
Ending Date
6047
Conflict Result
Wallingwish victory, creation of independent republics within the Wallingwish Isles.

Put down Wallingwish Rebellion and regain control of the colony of Wallingwish.
Ensure the independence of the Wallingwish Islands, to make a major blow toward Lysandus' colonial ambitions. 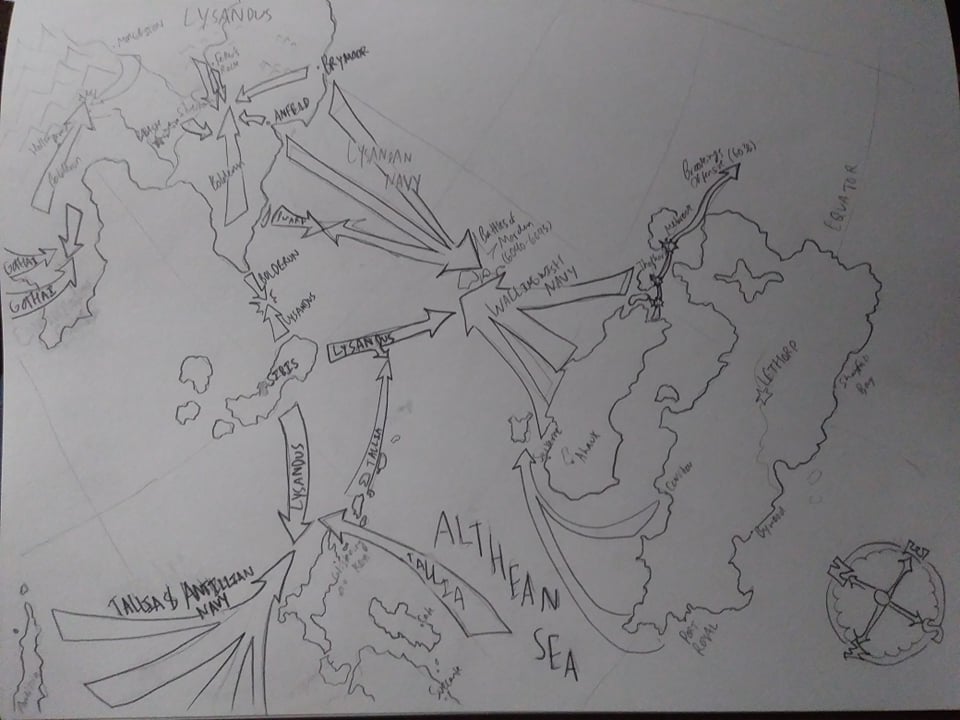 Wallingwish Independence by MrCrackerpants
A rough map of the entire conflict, arrows showing defense and offenses taken by the powers that engaged in the conflict. The map fails to show much of the land fighting in Gothai between the dwarf and human kingdoms.