Amelie Dumas was a young Gothan necromancer who resided within the Duchy of Manneruck. In the year 1A 4282, she was accused of witchcraft within the town of Dunkoff.

Amelie Dumas grew up in the farming communities along the Vine river, particularly in the town of Dunkoff. She was born in the year 4261 to her mother Ida and her father Daniel Dumas. She was the eldest of her siblings and was used to hard work and chores and caring for her siblings on the farm. Indeed, the Dumas family had many cows and were prime producers of cheeses and milk. She also learned embroidery and how to cook from her mother Ida. She expected to marry another farmer and remain in such a rural life, until she met her uncle Mateo.   Mateo Gautier was a court mage for the Duke of Manneruck. He recognized that Amelie was gifted with an understanding of magic. Mateo asked her parents if she could study under his guidance, and her parents agreed to this. Amelie thrived in the academic enviroment that was the libraries of Manneruck, and eventually became so curious that she stumbled upon books on the forbidden art of necromancy. She dabbled and experimented in the art, despite it's illegal nature.   In secret she tried to practice this art, but was eventually caught by the Arch-Magistrate of Larian, Augustin. Once, when Amelie was testing out some necromancy in a location where she thought she would be undisturbed, the mage Augustin happened to find her. Terrified of what would happen if he were to tell anyone what he saw, Amélie prepared to invent an explanation that she wasn’t doing what it looked like she was doing. But then, Augustin quietly suggested an alteration in her necromantic technique!   So Augustin became her second, secret mentor. Amelie started to enjoy her discussions of necromancy, and became addicted to the adrenaline it gave her to get so narrowly caught from practicing it. It was after yet another close call involving Amelie’s experiments that made Augustin realize she was becoming a serious threat to his own position in her court. If she were ever apprehended, he couldn’t be sure that she wouldn’t betray him, even if unintentionally.   So Augustin casually told Mateo that Amelie's skills were good enough that she should do field research as an assistant. That way, Mateo would not have to go on numerous trips to get more components himself. Mateo agreed, as long as Amelie avoided danger and gave progress updates. He didn't desire to tell Amelie's parents that he would send her to her death. Amelie gave her uncle her word that she would stay safe and write often.

A Crusade in Larian

She broke this promise immediately as she left by the early September of 4282. She got into a scuffle with some local bandits outside of Dunkoff, who tried to prey on a travelling merchant. It satisfied her adrenaline craving to stop them. However, though the merchant was thankful and swore secrecy, another witness named Erard, a swine herder, saw her absorb life force from the dead bandits to heal herself. The swine herder then reported it to Earl Luquin, and soon the guards had Amelie arrested for the "high crime of witchcraft". She was bound, and the next day was to stand trial in the city square.

Amelie Dumas secretly learned the art of necromancy under Archmagistrate Augustin Souris. Augustin has high hopes for the prodigy, hoping she will one day surpass him in magical skill. Meanwhile, Amelie enjoys the danger of the art and has become somewhat of a thrill seeker. Her behavior has endangered the secret they keep of participating in the necromantic arts. 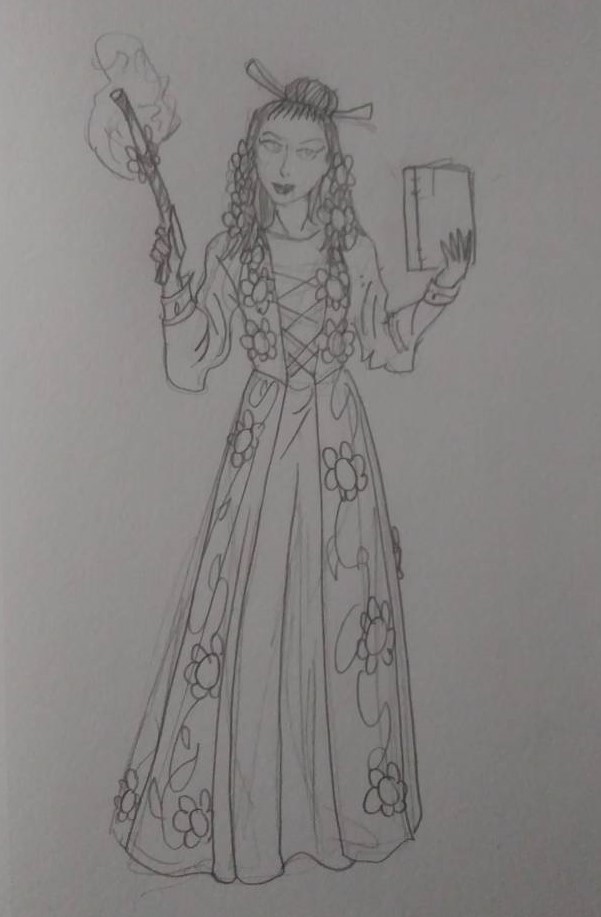