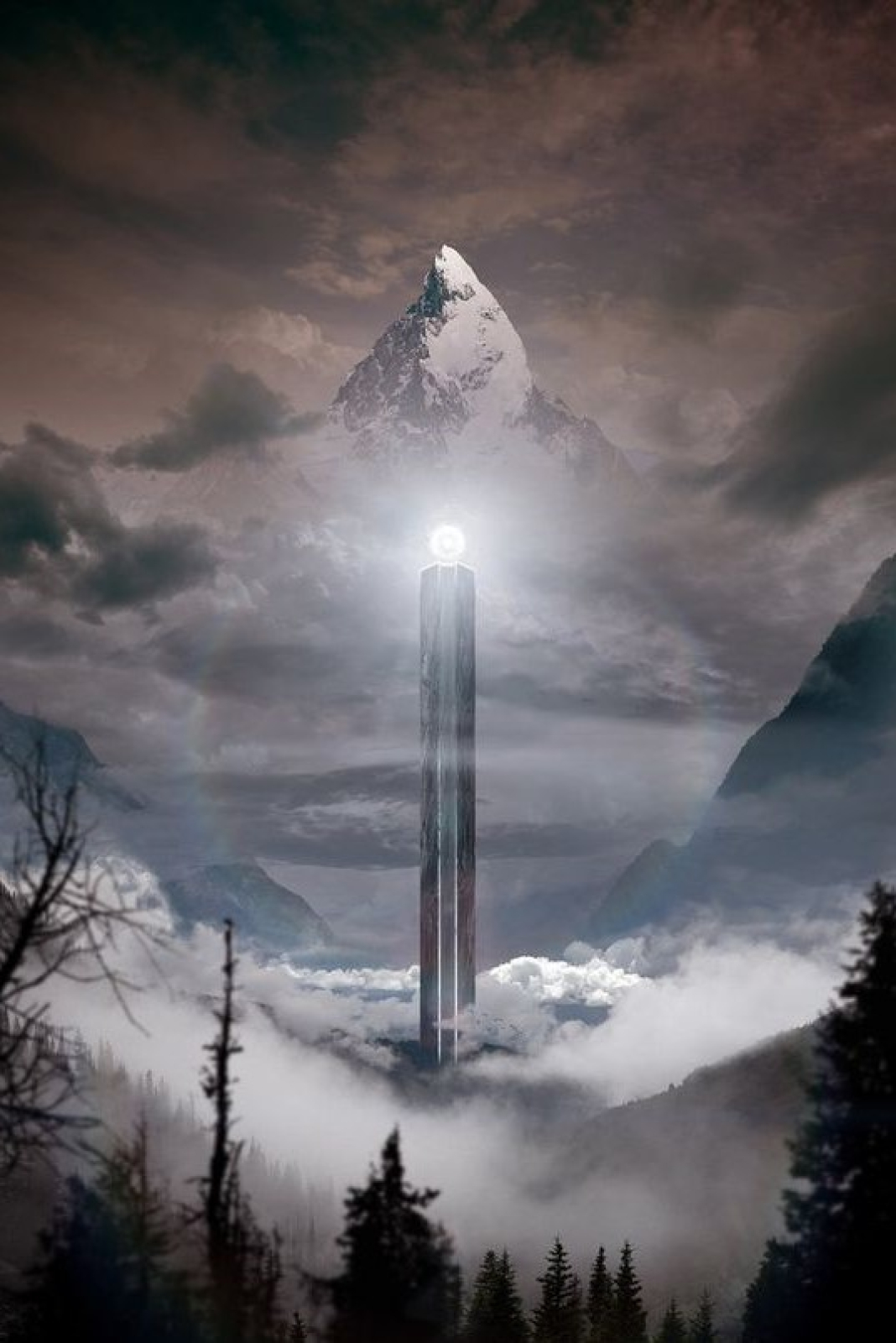 Tower at the centre of the world

In the great fields south of The Mountain lies The Tower. It has as many names as there are languages and people to speak them, and then more. But for humans and elves nowadays it is known as the tower at the centre of the world. A giant pillar of pure obsidian, perfectly round and even more perfectly smooth, if such thing were possible, the Tower rises to the skies, piercing the clouds and going further still. It is said to be at the centre of the world because according to Morganna, the tower is supported upright by the four winds of the world and this is where they meet.

If a mortal ever knew the purpose of the Tower, they never shared it with anyone else. According to legend, this was the very first Spire, and where most dragons retreated and hid from the world. At the height of their knowledge, they built an experimental structure considered impossible by mortals. With no foundations or supports, the Tower was the crown achievement of their skills, and it became their home until the other Spires were built. Or so the popular story goes today...   It plays a large role in many cultures and religions, especially among denizens of the West. According to some tribes, it was built by the great dragons in order to spite the gods, and it's what lead to their eventual death. Other people believe it's the pillar that holds the sky from falling down, while in viking myth is the The Monolith - a rock unmovable and unbreakable, the ultimate test of might.

The Spire is indeed a most curious landmark. It appears to be built out of pure obsidian, however it is surmised that it's heavily enchanted, since no tool or weapon can even as much as dent the flawlessly smooth surface, and only scratch it aplenty. It is estimated to be over ten kilometres in height and it takes about a thousand people holding hands to circle it. At the bottom it gradually rounds out, bizarrely so, and it appears to stand on very little actual ground. There are no visible (or invisible) supports or foundations of any kind. There appear to be no doors, windows or openings of any description along the entire surface, at least nowhere that a mortal can get to.   Worth noting is that in the past few thousand years, the tower has begun leaning to one side. It is not yet noticeable by the naked eye, but those who have studied it from afar claim that it is now tipped two degrees to the East. It wasn't documented exactly when this began, or what caused it, only that it was first noticed over two millenia ago, as far as written records of the mage guild go.

Since the dawn of civilisation, men have been perplexed by the monolith that pierces the sky. It has been a source of fear, an object of awe, a place of worship and fascination for different cultures across different ages. Foolish mortals have attempted to climb and conquer the Tower for thousands of years, some attempts even becoming popular entertainment provided by bards and jesters alike.   In their obsessions with the mysterious object, many have tried to settle near the Tower or even build settlements around it. However none of these attempts have been successful - the area appears to be a centre of terrible storms, earthquakes and all types of natural disasters, which only seem to amplify in strength and grow in frequency the more people try to settle and build around it.   According to one particular myth, the Spire has actually been toppled once before, however even the tales omit as to how. Some say it was the combined strength of a thousand dragons, others speak of the ground splitting before it. In reality, nobody truly knows, except the elders who were alive all those years ago, yet they are particularly coy on the matter.   Since the formation of the first mage guild, all myths and stories have been exhaustively tested and recorded, as well as all future attempts. The records are kept in the great library or Emor and are expanded on every so often, as the knowledge of men advances and new methods keep being tested. The most famous work related to the Tower is "A thousand days later" by Master Iori. Arsianna is the only mortal who claims to have been inside the Tower and has gone on record saying "I will tell you this, and no more - you need enter the Spire through the gate below, not climb to the one above. Look back, not forward, and you will find it." This cryptic message continues to baffle young adventurous wizards to this day, and it is not an uncommon activity for hot-headed young mages to make the pilgrimage to the Tower and give it their best shot at least once in their career.   A Viking clan once claimed the Tower and lands around it as their own. Within a year, all of the clansmen fell ill and then dead, completely naturally. Nobody knows if the two events are related in the slightest, but it's worth noting that nobody has laid claim on it ever since.
Cue some thematic music!
Alternative Names
The First Spire, The Monolith, The Looming Shadow, The Godspite, The First Wonder, The Sky Pillar
Type
World wonder
Location
The Flatlands
Origins
Unknown
Material
Obsidian
Height
11 km
Width
570 m

Answering: "Describe the most impressive landmark in your world."
Visit Hegemon's Competition Page Check all other answers to this prompt Competition Homepage

My apologies, but I couldn't find a better picture to represent it visually. I'm getting art done for this soon so hopefully that will then give a better idea.