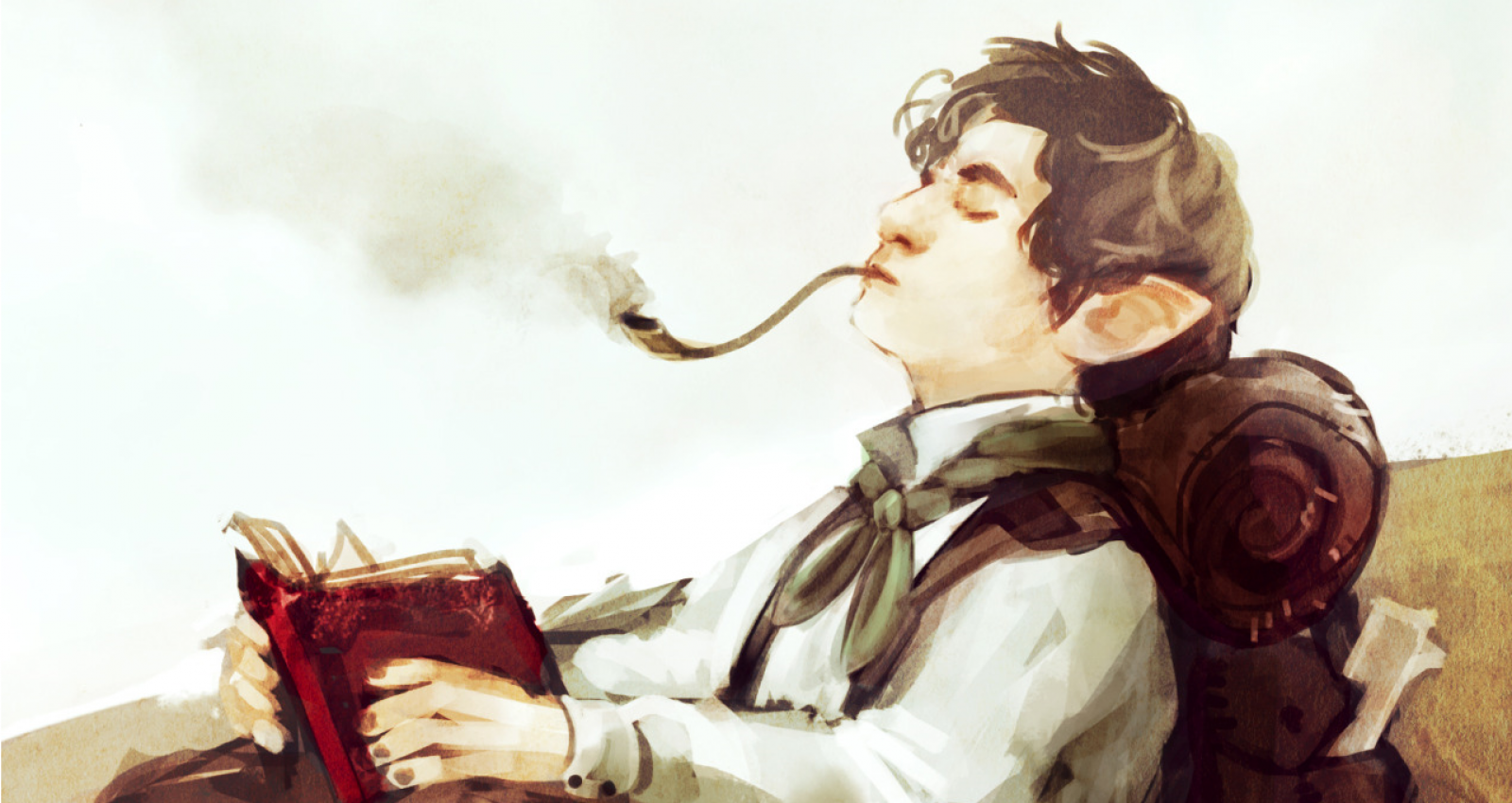 In game mechanics
Halflings will follow Pathfinder's rules as defined here. Social difficulty: ★☆☆☆☆ - For better or for worse, most halflings go about their business unnoticed. What focused attention they do get is often easy enough for them to navigate with due charisma. It's this amiability that grants them favor in most people's eyes.

"How do you tell the difference between a halfling and a gnome? Easy - just look at the feet! If they're wearing shoes, it's a gnome, otherwise it's a halfling."
— William Elridge, Human Explorer


Few know the spirit of adventure like the halfling. Driven by curiosity and wanderlust and aided by an uncanny amount of luck, halflings are the subject of much intrigue. They are renowned for their mirth and cheer, able to tell jokes even in the midst of danger. Despite seeming calm, they are hardly level headed, and can reach levels of arrogance with how willing they are to leap first and think later, relying on their luck and wit to get them out of a jam. While it's not guaranteed that they'll be safe each and every time, often this leads to putting their allies in danger as they throw caution to the wind. 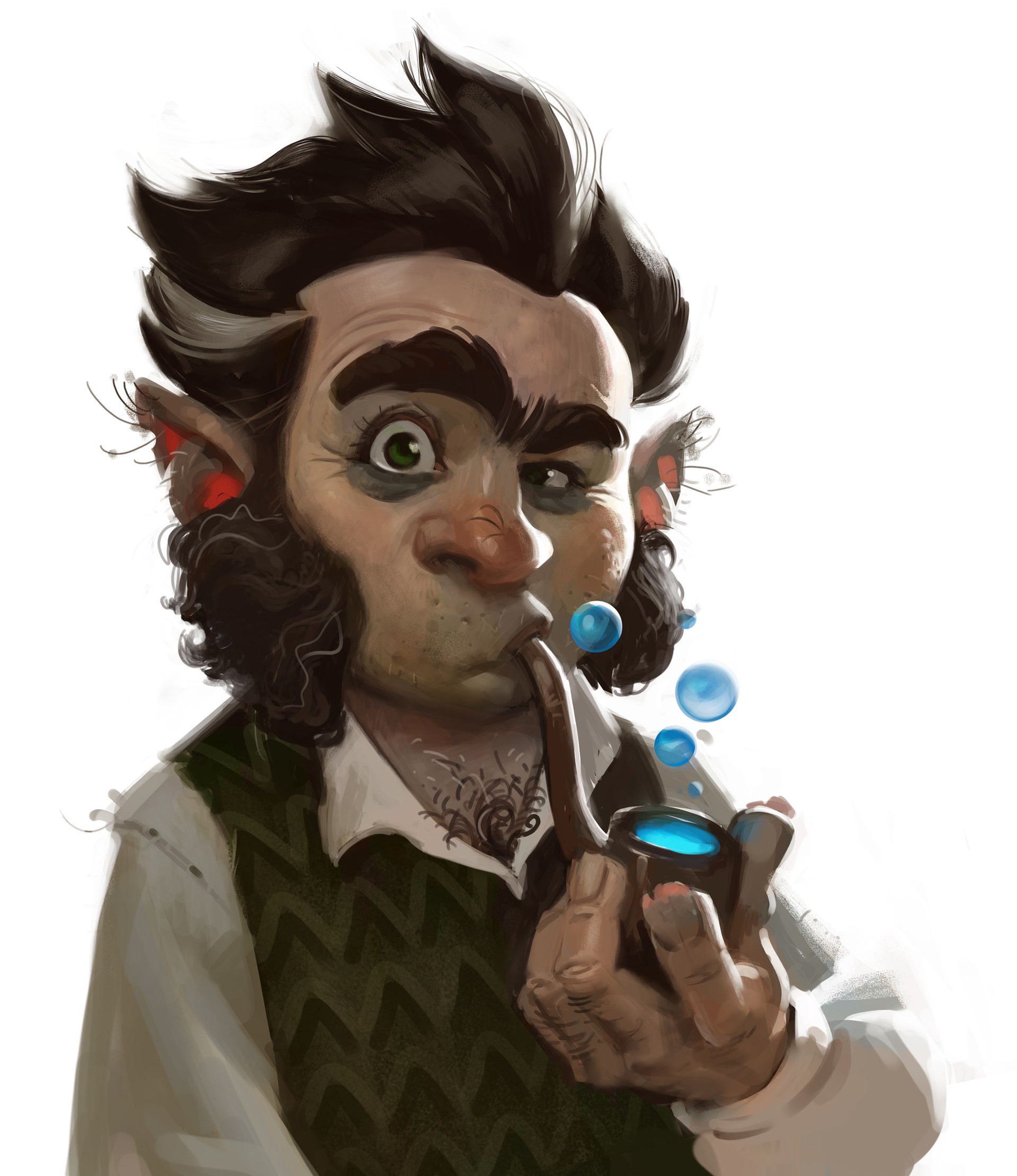 by Eldar Minibaev
Halflings offer an interesting visual aesthetic, often marginalized as 'just short humans', even though there are key differences. Chiefly they are notably a bit more hairy, especially around the sideburns and jawline where many men will sport hearty mutton chops. Although they're not opposed to styling their hair, many don't see the point, and instead prefer to keep things as natural as possible, even priding themselves on their earthly scent, even if they do bathe and keep to their hygiene.   Another large indicator is their feet. Large and rough, halflings staunchly dislike covering their feet if they can help it, citing that they prefer to feet the grass and earth between their toes and would have it no other way. Any footwear they do sport is usually just a wrap in the middle or some sort of 'over foot' protection like a brace, as they will even comically tread barefoot while clad in full and imposing plate armor. This exposure has led to the evolution of 'foot fur', which is just tufts of curly, bushy hair atop their feet.

Halflings do not need an excuse to adventure. Their inherent wanderlust acts as the drive and their luck as the tool to ensure a wondrous journey. Although they are willing to accept rewards and treasure, they see it more as a means to an end, such as to invest in their homes or to buy more supplies. 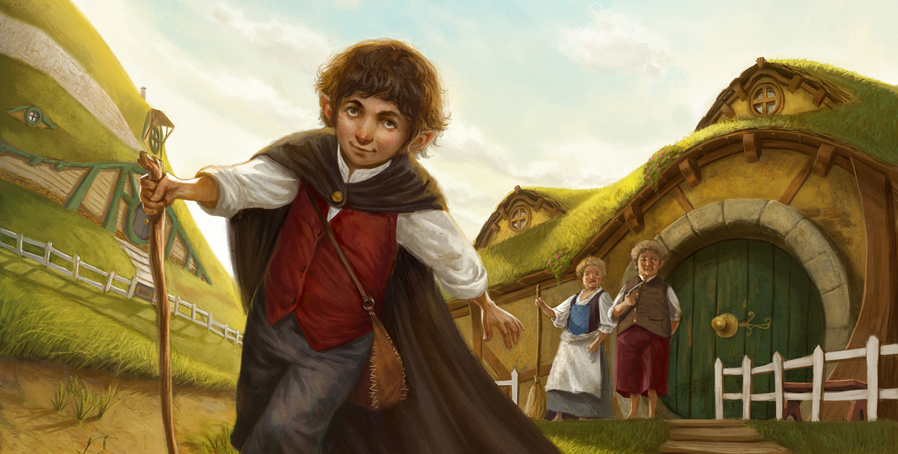 by Sebastian Giacobino
Instead, the value they place in adventuring is the many stories they'll be able to tell when they return, where they will spin even the poorest of moments into epic tales of bravery and heroism. They are a difficult bargain for adventuring parties, as on one hand their hearty meals, pleasant attitude, and their mystical luck is certainly a boon not to snub the nose at, but on the other, their recklessness, and 'head in the clouds' attitude can rub others the wrong way or even get the party into dire trouble.
Whatever the case may be, a journey with a halfling is never a short adventure. 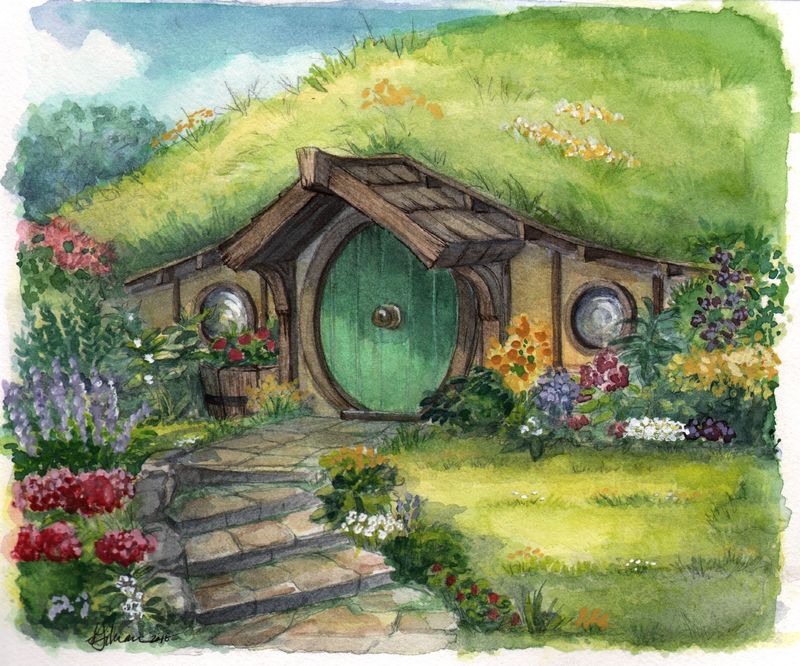 by lunatteo
Halfling homes are simple and quaint, but very much connected with the race and their values. Carved into the side of hills where they hollow out their living arrangements, these little hovels serve as perfect resting points for them to return to. A halfling will invest a fortune into their abode, viewing it as an offering to their own family as well as guests - A poorly kept home is not a kind place and no joy is to be had in a ramshackle dining room. Even the outside of their home is subject to personal scrutiny, opting to plant flowers or place decorations as a form of self expression. A family may value the color red and plant bright red peonies, or another family may have their home pointed perfectly for a tangerine sunset, and thus will set out comfortable furniture to better facilitate guests.   Halflings hold no value in building sprawling empires or decorated castles, and instead see more merit in community and kinship. What little villages they do create are tight knit, treating everyone, even some visitors, as family.

Halflings are a mystery in their origins as many creatures consider them as old as the land, likely owed to the fact that their homes are hovels carved out of the hills. In truth, Ciel - Goddess of Life, while maintaining the world, had difficulties with the giants near the mountains. These lumbering, massive individuals seemed to be growing with each generation, taller and taller than intended. Concerned that they might upset the balance by one day growing beyond the highest mountain tops, she began to shape them until they were the giants of present, and used the excess to create halflings.   Indeed, halflings are 'the other half of the giants not used', half, of course, being used colloquially, not as an exact measurement.

Halflings find it easy enough to fit in with most races, often to the point of blending in seamlessly, especially with humans. Their easy going and flexible attitude can be disarming with many forgetting they're presence, much to the benefit of halfling pickpockets. Because of this, if they're looking to be recognized and to engage, oft they will go out of their way to introduce themselves and interact.   Halflings share a kinship with gnomes due to their short statures, yet find themselves at slight odds. Where gnomes are eccentric and inventive, halflings are simply curious and prefer pragmatism.   They respect elves and dwarves but seldom spend extended time around them.   Their best form of company is humans where they share some settlements with. Despite a few conflicts made by human conquest, halflings are quick to forgive and forget and most interactions have been pleasant. However, they are not complacent and are wary not to be scorned repeatedly.   The only race halflings feel at unease around are the half-orcs which they consider too violent and intimidating for their relaxed nature.

Although pleasant and merry, halflings are also practical enough to understand that they will need to work and scrounge for their own place in the world. This sets them usually at the neutral axis, though can be swayed either way. Despite their independence and need for self expression, they are wise enough to know when to bend to the whims of the kingdom and when to feel free to be themselves, though if ever in direct opposition between the values of their environment or their own internal beliefs, they will do what they think is best. Good halflings are guided by empathy and a sense of community, often aiding others because it's in the best interest of all to have friends and family. Evil halflings, however, may be guided by a strong sense of arrogance and self perceived righteousness. Evil halflings are also more prone to take advantage of their pleasant and social whims, justifying pickpocketing and theivery as a means to an, often selfish, end.   Happy to get along with the group and their surroundings, halflings don't mind worshiping most deities, though will grow more at unease the further it strays from their axis. Many recognize their own luck and some attribute it to Tiamera - Goddess of Luck, so it's considered common sense to say a prayer or two in her favor. 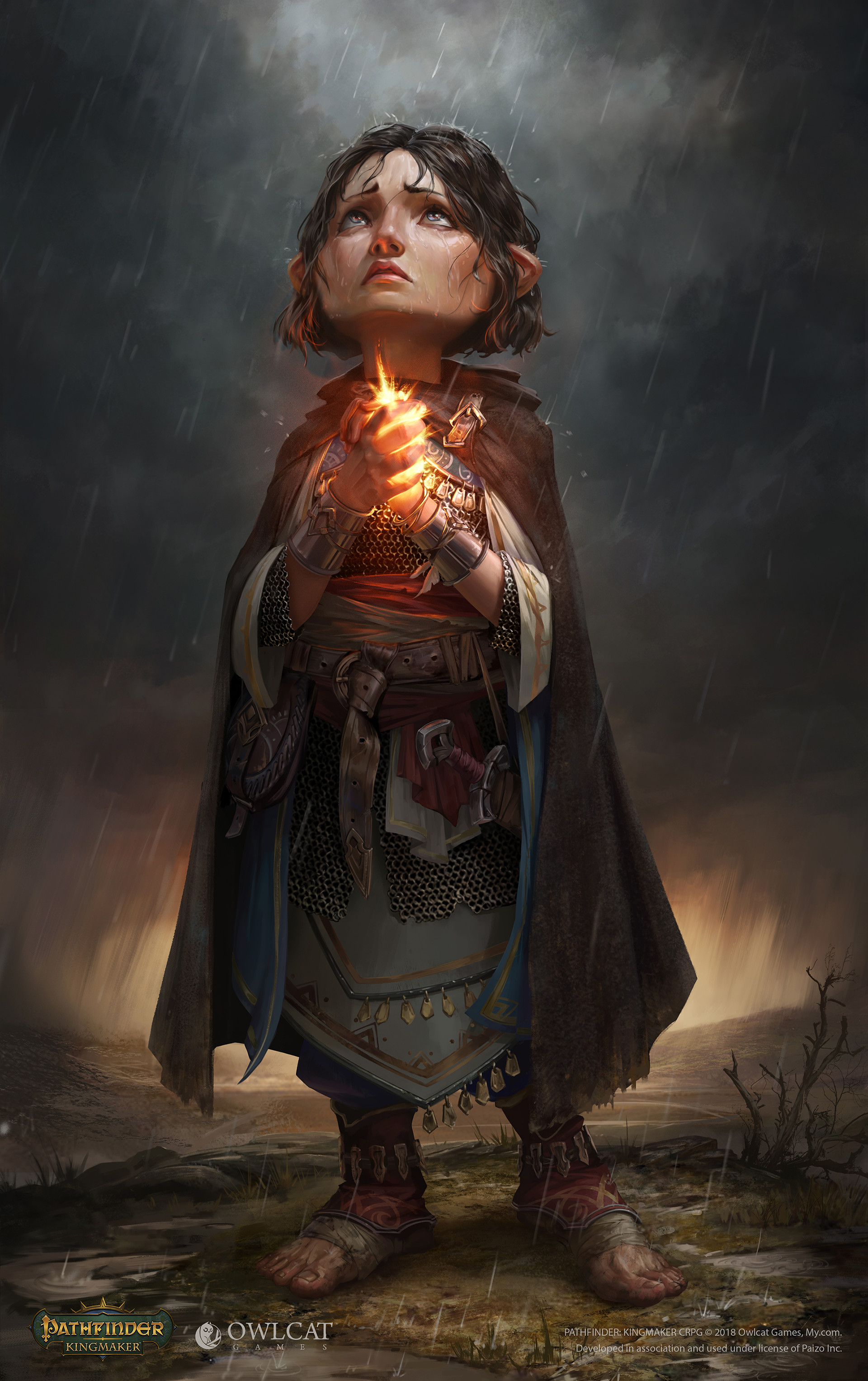 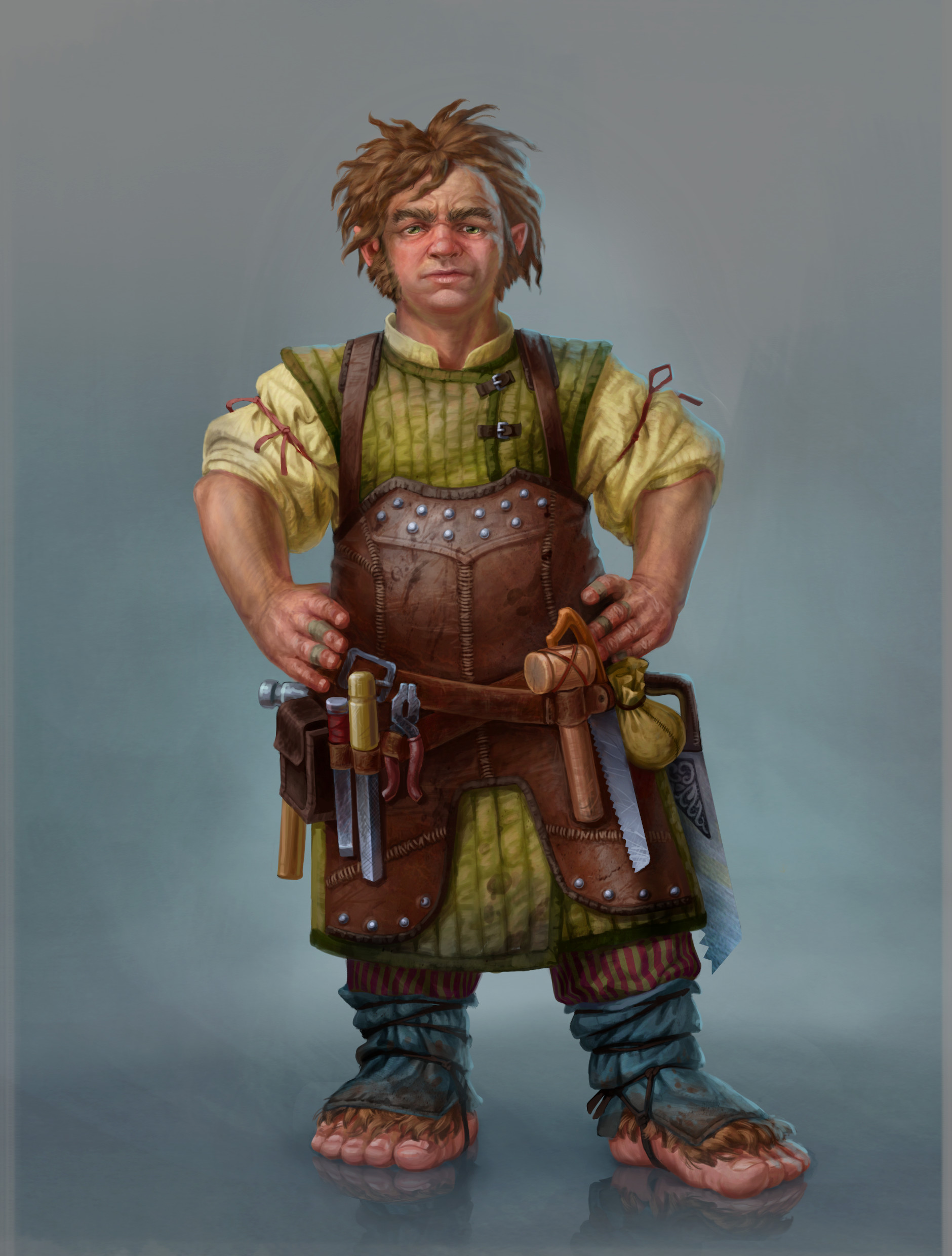 Halflings speak Common and Halfling. Halfling is just a sped up version of Common spoken so quickly that many words are blurred together and it's otherwise indecipherable.

Their skin is much like humans in that it varies in shades of peach to mahogany. Their default skin is a sun kissed olive, though they are susceptible to tanning and variations from their environment.

Although they are omnivores, halflings take food very seriously. Many a halfling gathering is accompanied by large feasts seemingly too much for their small frames, and oft they are refer to several meals of the day such as 'second breakfast'. There are several signature halfling dishes that are considered delicacies in parts of the world.

Although halflings are considered an adult at 20, many strike out on adventures as early as 13, though usually return home before going on their 'grand adventure'. They are considered middle aged at 50 and old at 75, but their luck affords them a longer senior life than most. Natural death occurs around 130 years, but they will be quick to tell the tale of 'Old Man Habblebee' who lived to be 250 before his luck ran out. 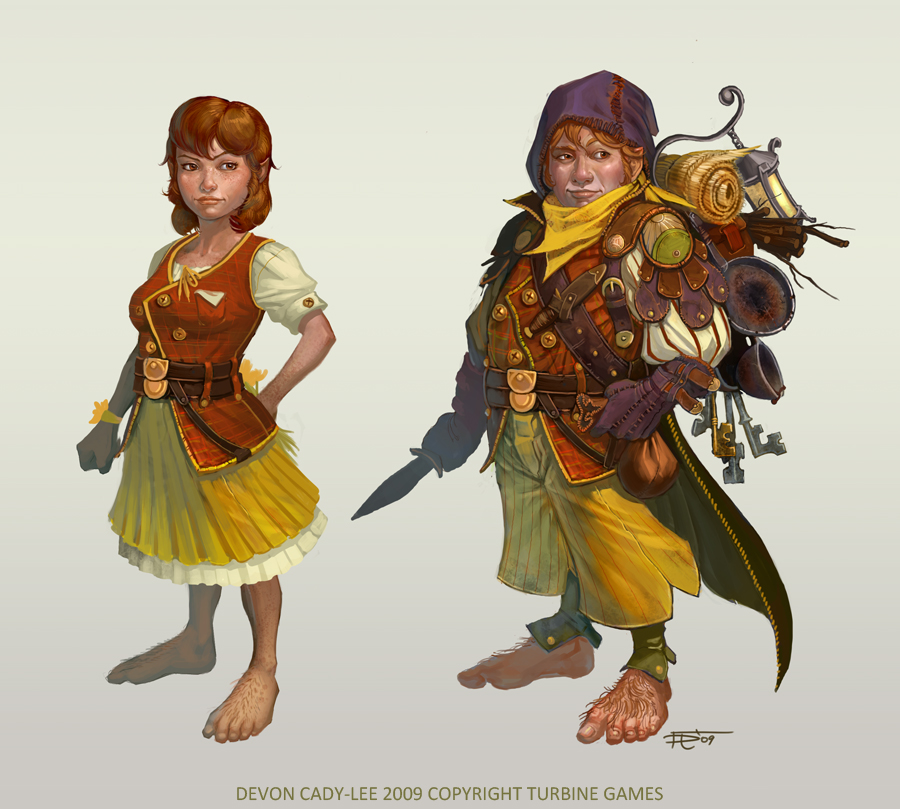 by Gorrem
A Lesser Known Halfling Pasttime
Where dwarves have worked to master the brew, many halflings devote themselves to the pipe, from crafting ornate set pieces to making it their life goal to grow the ultimate herb. Their devotion is so apparent that many communities will hold 'smoke blowing' competitions and some will mix their herbs with magic for interesting effects, like blowing bubbles instead of smoke.   It is not uncommon to see a small group of halflings sitting on chairs in front of their homes and simply comparing pipes. 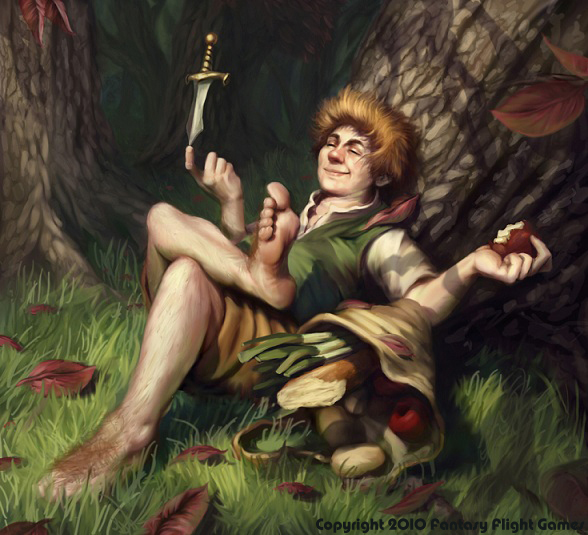 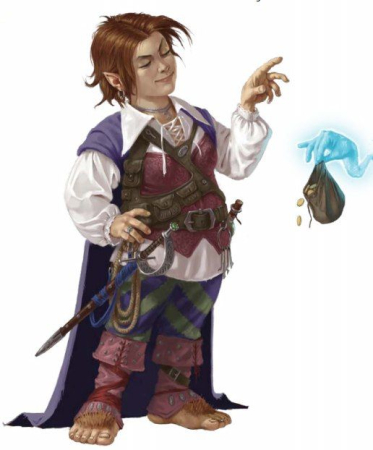 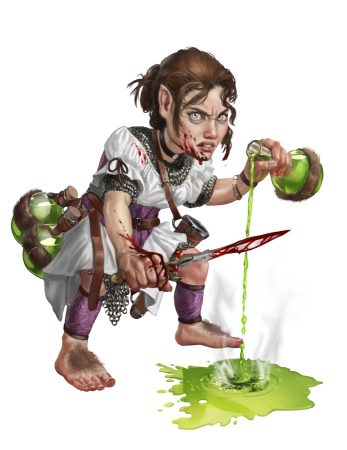 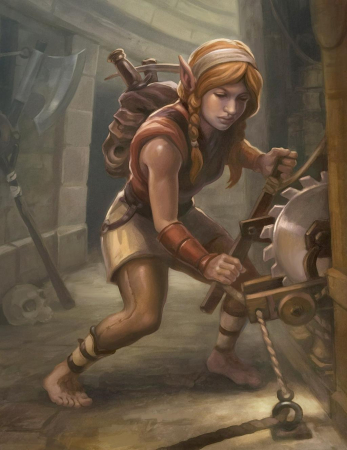 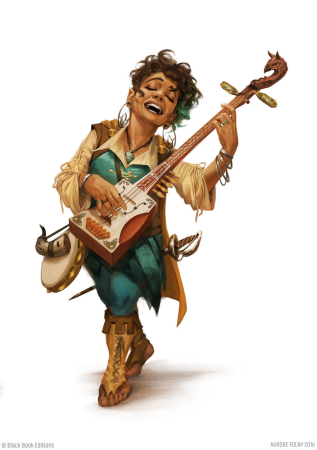 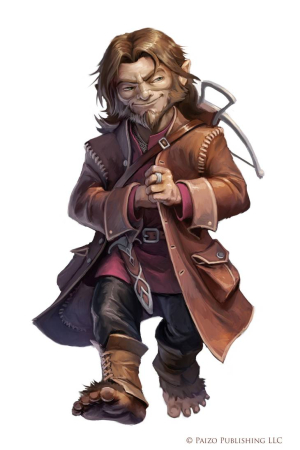 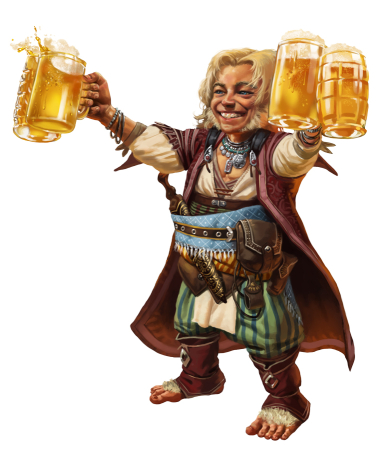 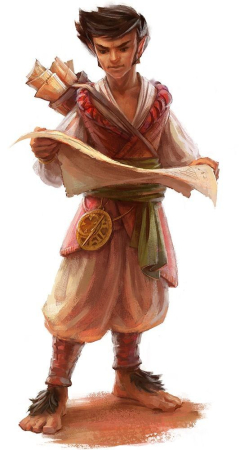 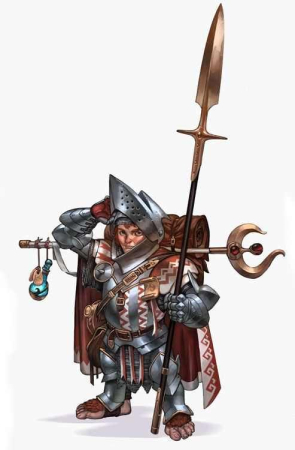 This is such an amazing article. I was really captivated by it!   I was particularly fond of the creation myth of halflings "used the excess (of giants) to create halflings.". So funny and interesting. I also thought the past-time of pipe making, herb growing, and smoke blowing was a very nice touch.

You spoil me with your kind words. Thank you.