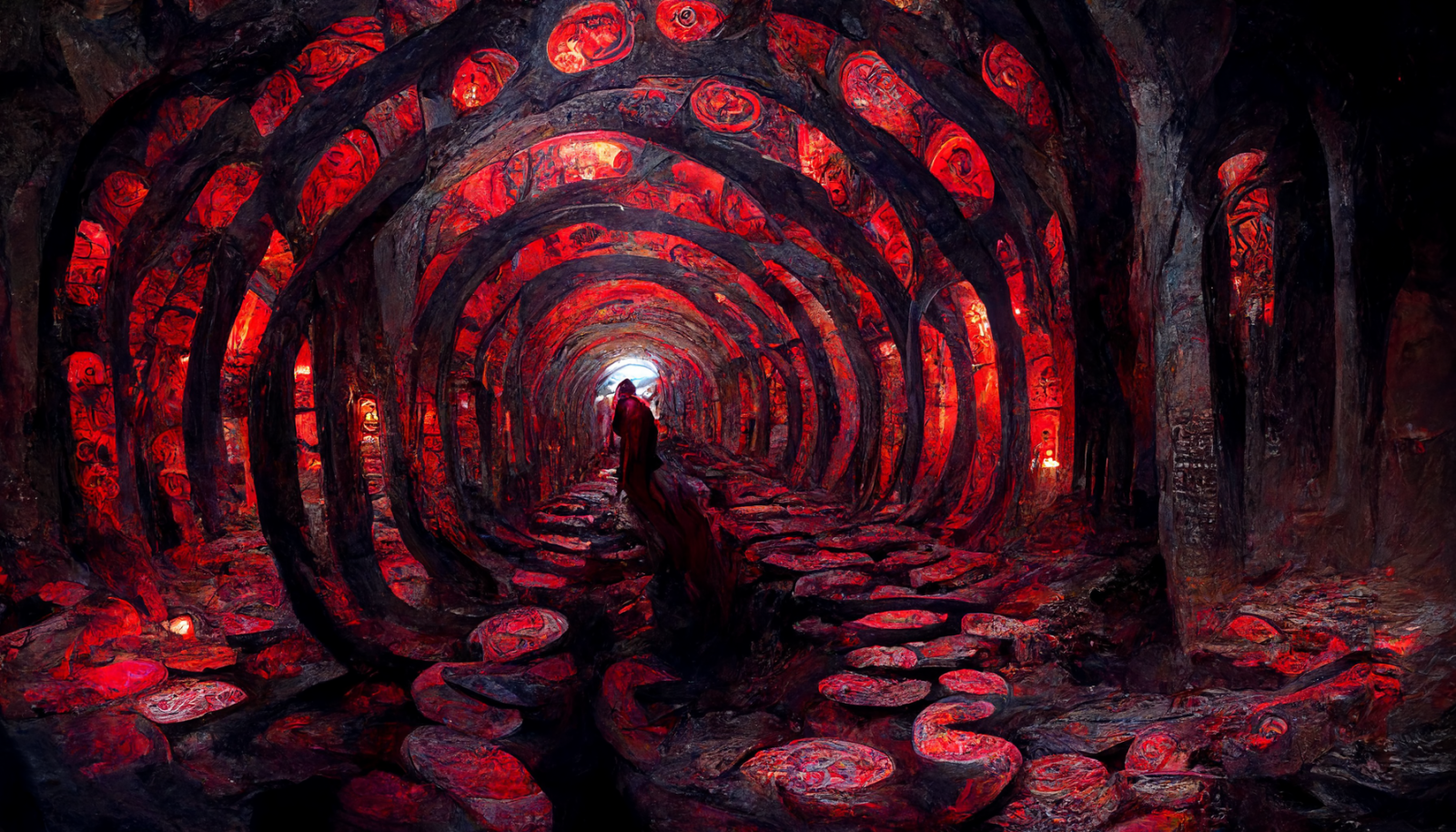 It is the greatest and last work of those who came before us. Their bones are elsewhere, but their dreams are here.
— Aldara the Dream-Eater

A great monument of thought-metal and boundless ambition, the Skein-Spiral gates are the work of an unknown and forgotten folk. It is a twisted maze of spiraling tunnels, with mesmerrack marking every surface and poisoning every gaze. Once within, those who walk the spiral also travel within their own minds, contending with very vice and every secret, every unwelcome demon, and every hope they hold in their heart. Inside the shifting, prismatic Skein lies either madness or enlightenment.   Few know of the Skein, and no one has taken more than a few steps into its labyrinthine tangle. Few are ready to face what they find there, no matter what treasure they are sure must lie at its heart.

Aldara raised her torch and was greeted by a rainbow glitter. The path in front of her shone with iridescent metals, imbedded into the walls, spreading across it like spiderweb. With every flicker of the flame, the prismatic gleam danced across the spiraling tunnel in shimmering waves. It drew her gaze into the colors and she was lost.   Her body felt like a distant thing, like something she didn't quite inhabit. She moved her arm to see if she still could, and it obeyed, but the gesture felt disconnected, like she'd just pulled the string of a puppet. Well, good enough, she decided, and forced her legs to work again. She dragged herself forward, one step at a time into the twisting tunnel.

The Skein-Gate is hidden in the Grey Halls lower half, far from the beaten path and not far from what is believed to be the edge of an unknown Far Deep region. Only remnants remain of what seemed like waystations, or pilgrim's stop to some, long since overgrown with fungi. The Skein begins with a large antechamber, decorated with winding tendrils of red stone set into the cavern floor and around the entrance like an arch. A single piece of mesmerrack is embedded into the floor just in front of the Skein's first step, but what looks like a sharp cut across has ruined whatever function it once had. 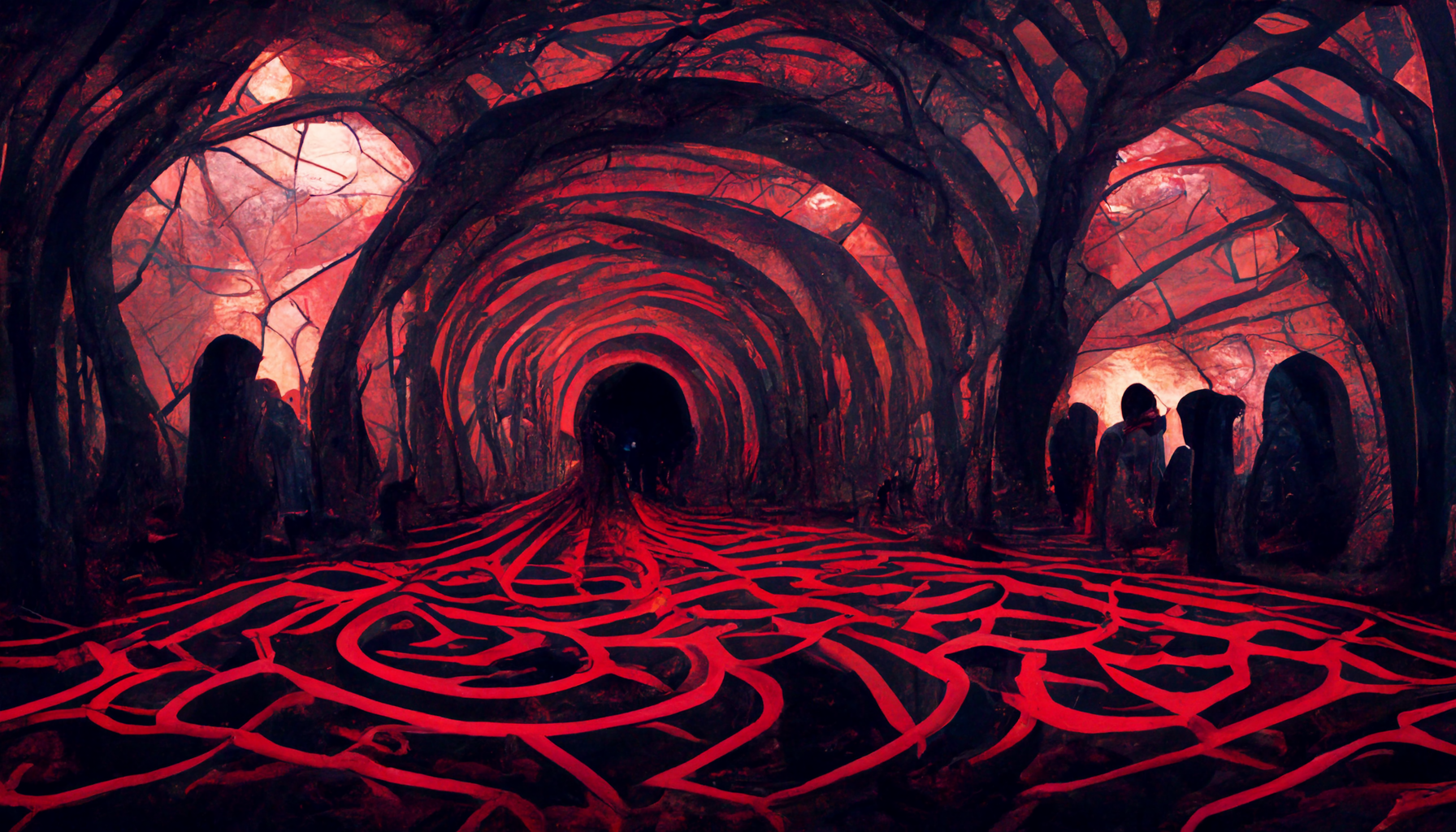 It felt like she was walking through a dream now. Her body was as light as a breeze, numb and muted. Even the weight of her pack seemed distant, like someone else's burden. Only her thoughts mattered, echoing loud in her head and again in the world around her. They were loud enough for Aldara to turn her head to look as the noise seemed to bounce around the tunnel. What had seen like a single path now split in front of her, every fork in the road turning into another further down in the dark, until it was an impossible tangle of ways.   Aldara hesitated and came to a stop. She knew that if she looked behind her, the way back would be the same as the one in front of her. There was no way out of here but through. She raised the Guide and gave the fractal vision of pathways in front of her the most defiant stare she could muster. If they were going to be like that, she reasoned, she might as well pick a way at random and just continue forward.

Once past the archway, the Skein is a single tunnel, always curving in some direction. There are no straight lines; the entire cavernous tunnel twists, making footing uneven and difficult. The first hundred yards appear unadorned, and it isn't until further in that the first, shimmering Mesmerrack runes appear. More are hidden in the groves of the twist, visible only when explorers turn around.   There, the Skein becomes alive with color and light, with the prismatic Thought-Metal glowing in the dark in response to though. As the Mesmerrack takes hold, the Skein's tunnel warps, twists, divides and collapses in on itself, becoming an impossible maze of potential path, with every labyrinthine end opening to another labyrinth. What is real and what is imagined blur together and the distinction becomes irrelevent. Most give up here; some make it out through desperate effort, while others wander the Skein-Spiral until they can walk no more. 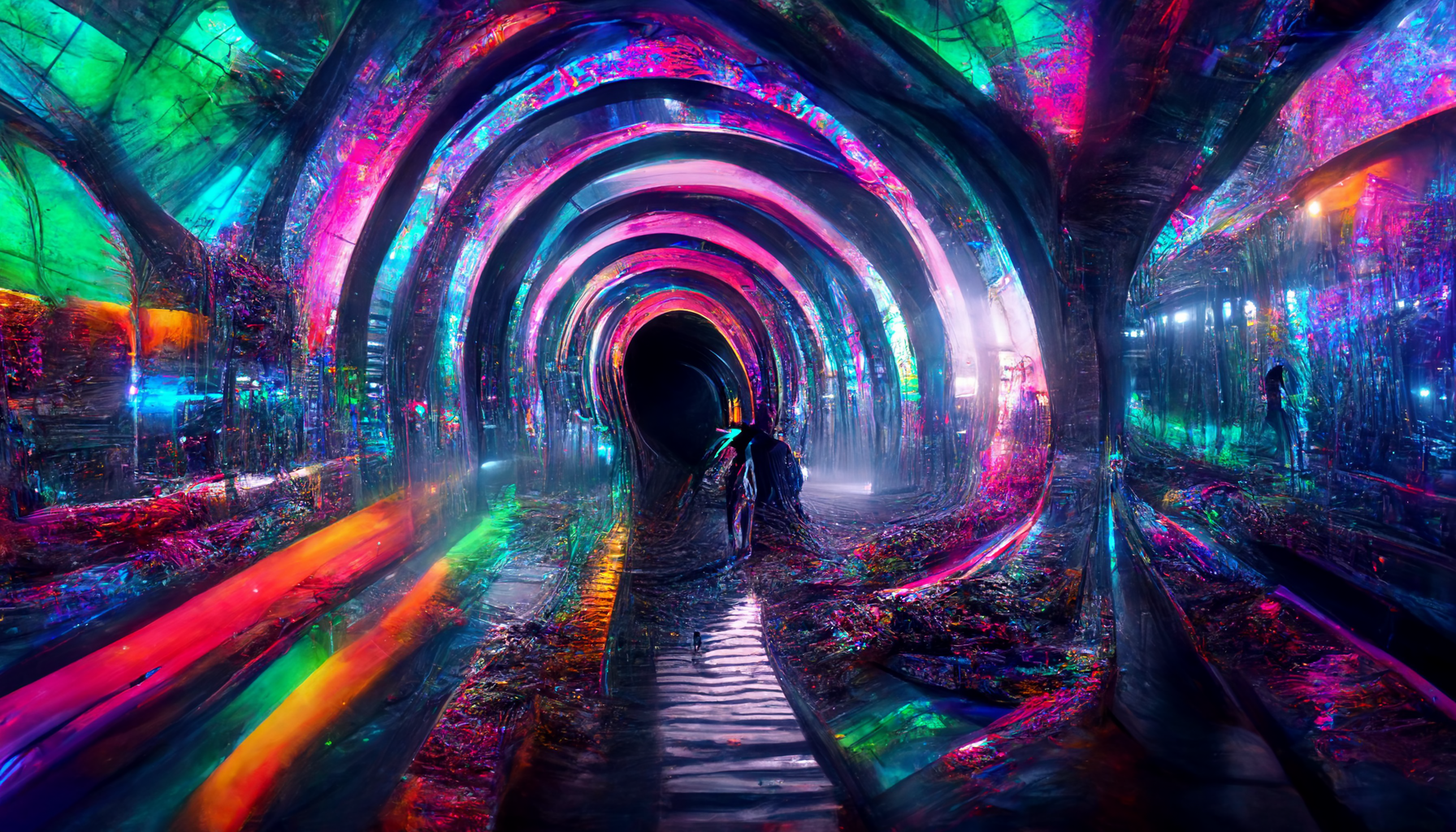 
Black Heart of the Spiral

The steps had become familiar now, like she was threading a living memory. The echo of her step reminded her of the tunnels of her home. Aldara thought she saw the outline of the old stretch of carved homes and shopes from back in Mharaji in the shimmering rainbows. Voices bubbled up from the tunnel around her, a voiceless blabber she could recognized. There, in all the noise, she could make out the habitual complaining of her brother, and the hawking of merchants.   Aldara listened, and the world become more solid. There was just a single path now, straight as an arrow. A thousand doors waited for her at the end, all at the same place. The door to her home, the gate she'd crashed to first eavesdrop on the Kaia near to it, all sharing the same void at their heart. Aldara raised the Cenotaph's Guide and pushed it into the hole, the effort bringing her back into her body. It locked in place, and the door opened.

Patala, the Descent   A cavernous realm of canyon-like halls and abyssal descents into the unknown, Patala is home to the Skein-Spiral, the last monument of its doomed folk. Once more open to mankind, their presence there have awakened the Gates.   Deep within the Grey Halls of Patala, hidden in the dark and guarded by nightmares, the Gates call to the brave.   Read More About Patala 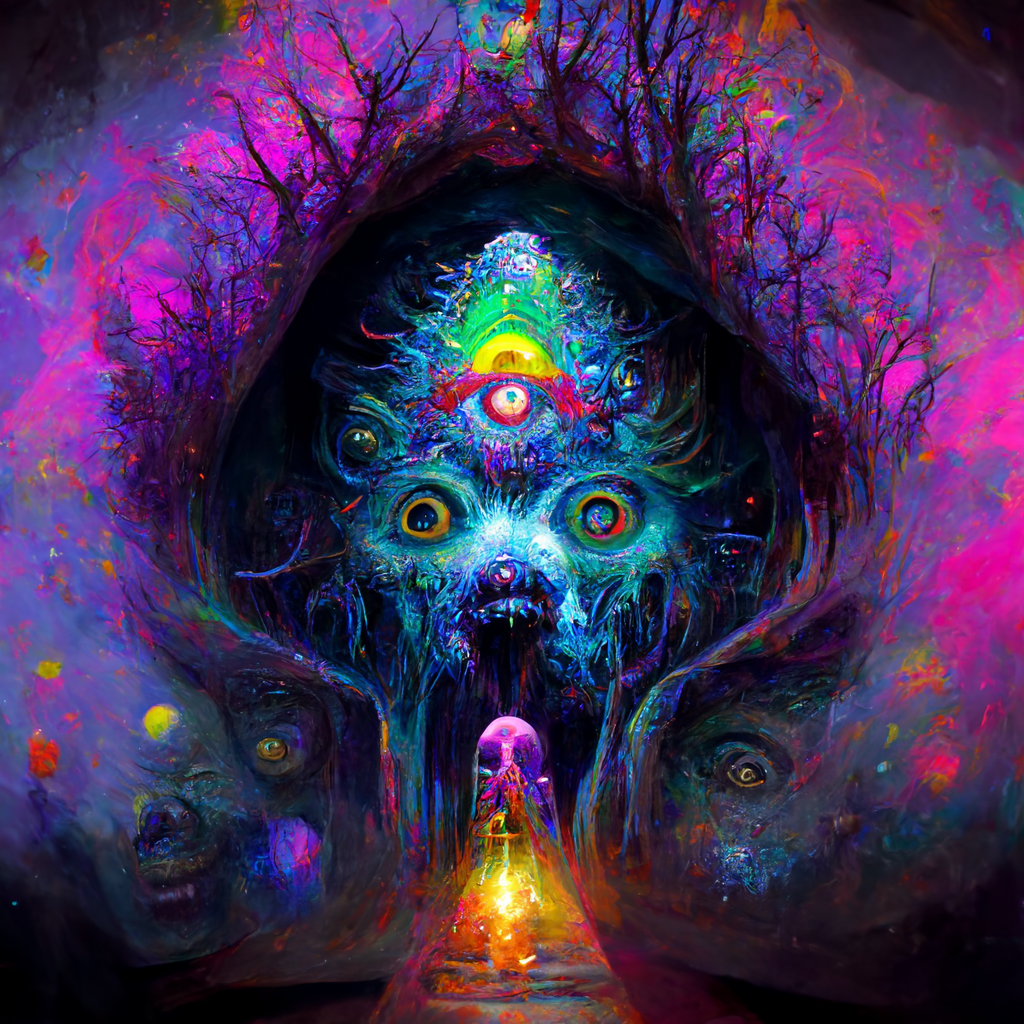 Elaborate patterns of thought-metal, Mesmerrack holds the power to enthrall or intoxicate with just a gaze. The secret behind its workings are lost with the ancient folk of Patala, despite all efforts to replicate whatever design went into the constellations of gleaming metal.   It isn't quite right to say that the Gates are covered in Mesmerrack - it is one, a vast and singular work of... Something. Only by passing through can its purpose be understood.

A lost and forgotten art of binding thought-metal into patterns that enthrall or intoxicate those who gaze upon them. 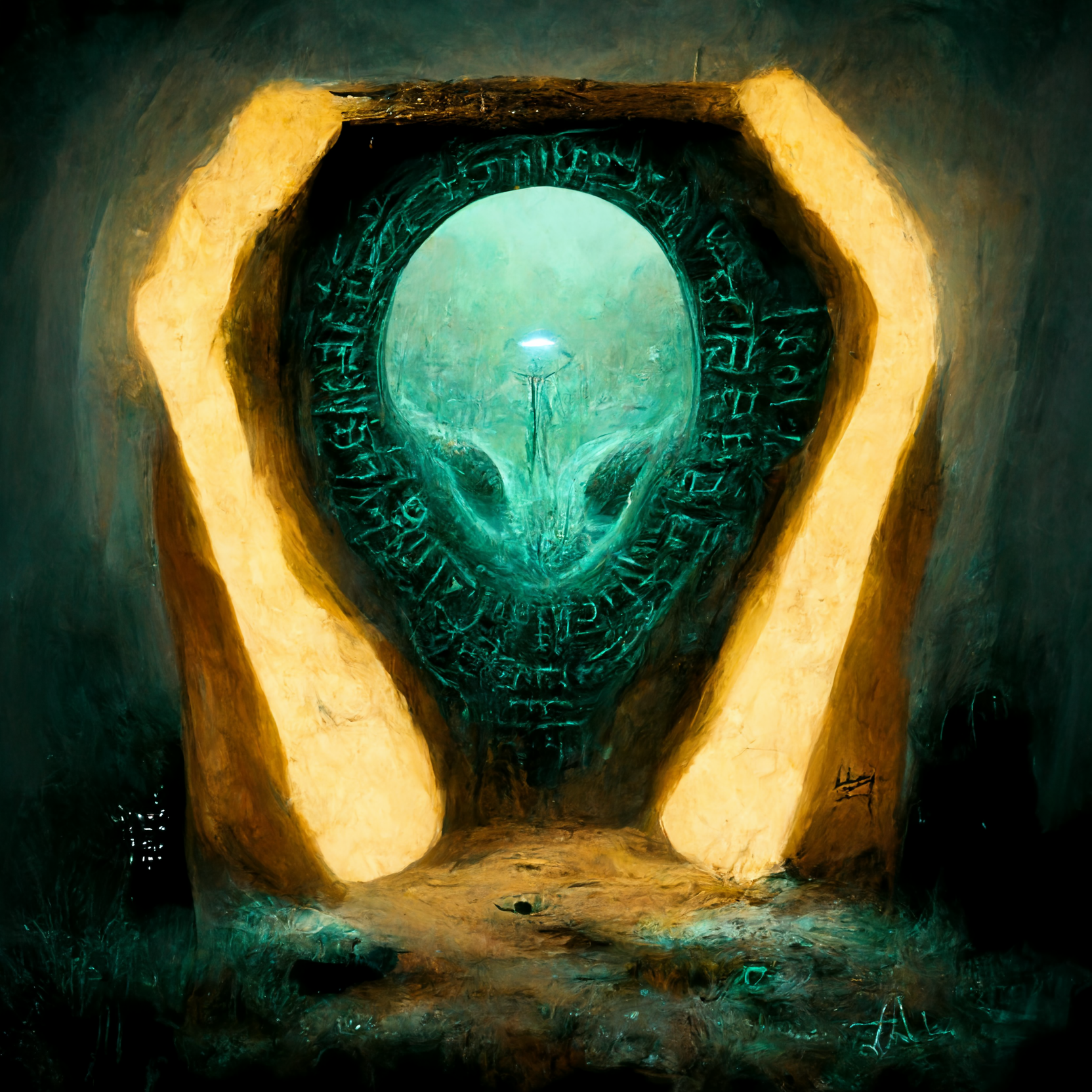 Though nothing grows within the Skein and no creature from Patala's wild venture into its depth, it is not uninhabited. Human-like things lurk here, with limbs too long and movements too quick. They are seen in glimpses, a blank face in a reflection or movement out of the corner of the eye.   To those who know of the Labyrinth, the creatures bear an uncanny resemblence to the Specters there, though somehow... Different. Less solid, like half-formed nightmares.   No one has yet been attacked by these specters of the mind, but no one ventures into the Skein unarmed.

Despite these dangers, one shine with its absence - the Shrikes. None of the thought-eating moths have yet been encountered within.

Lurking nightmares made into flesh, Specters haunt the Labyrinth and stalk any who enter their world of darkness.

Other creatures of the Skein are not quite so solid. Nicknamed 'Brain-Goblins' by the few who have been into the Skein, these thought-spooks manifest as anxious loops, faltering courage, and existential dread with a faint, whispering voice. 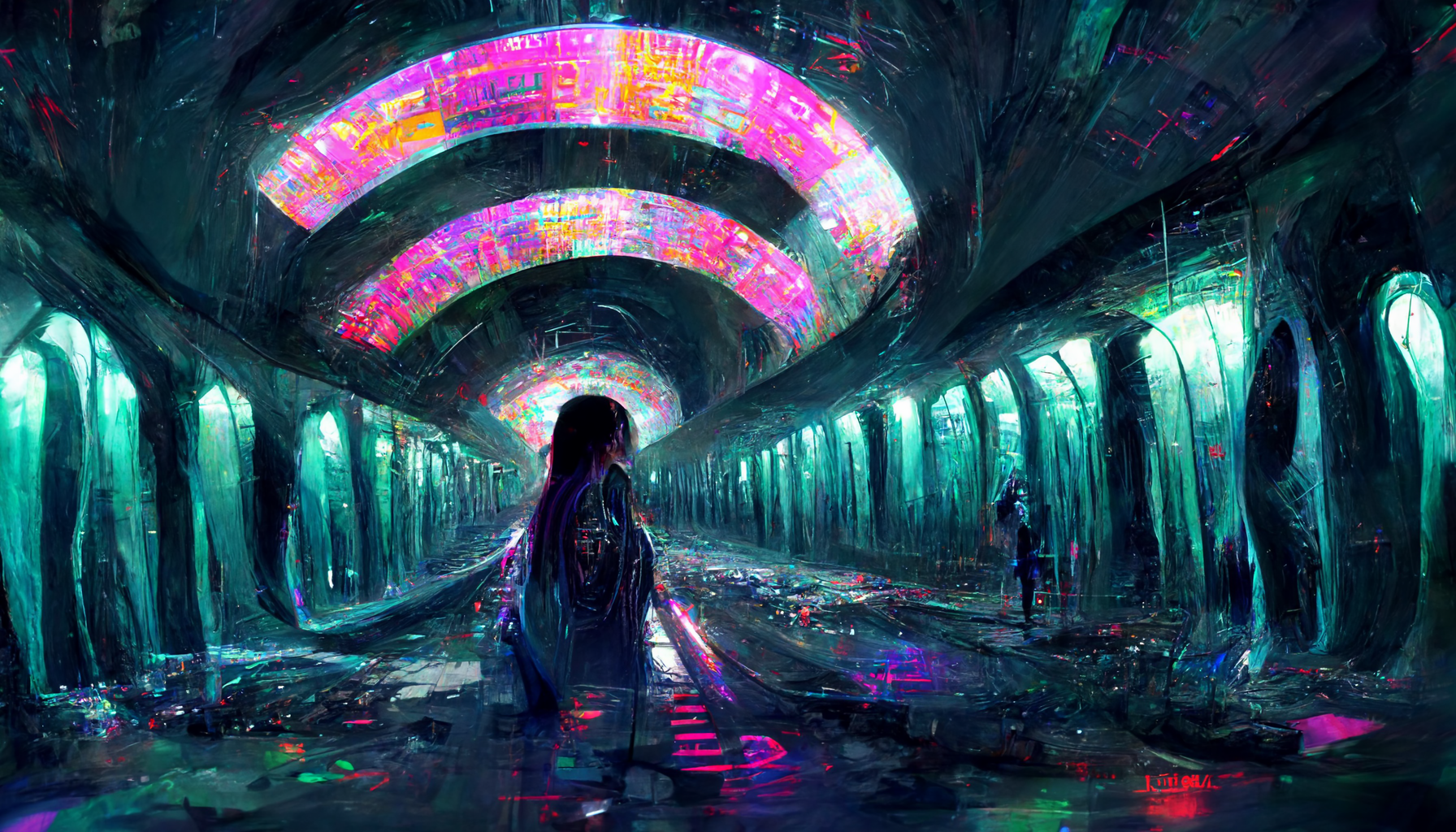 
A piece of the ceiling dripped down on her shoulder, the stone and metal turned into a mixed liquid. Aldara turned, and the path behind her has become a single unbroken ocean of rainbow-colored metal. It was still at first, then it began to ripple, rising into waves as something like an eye rose from the prismatic flux, and looked at her. 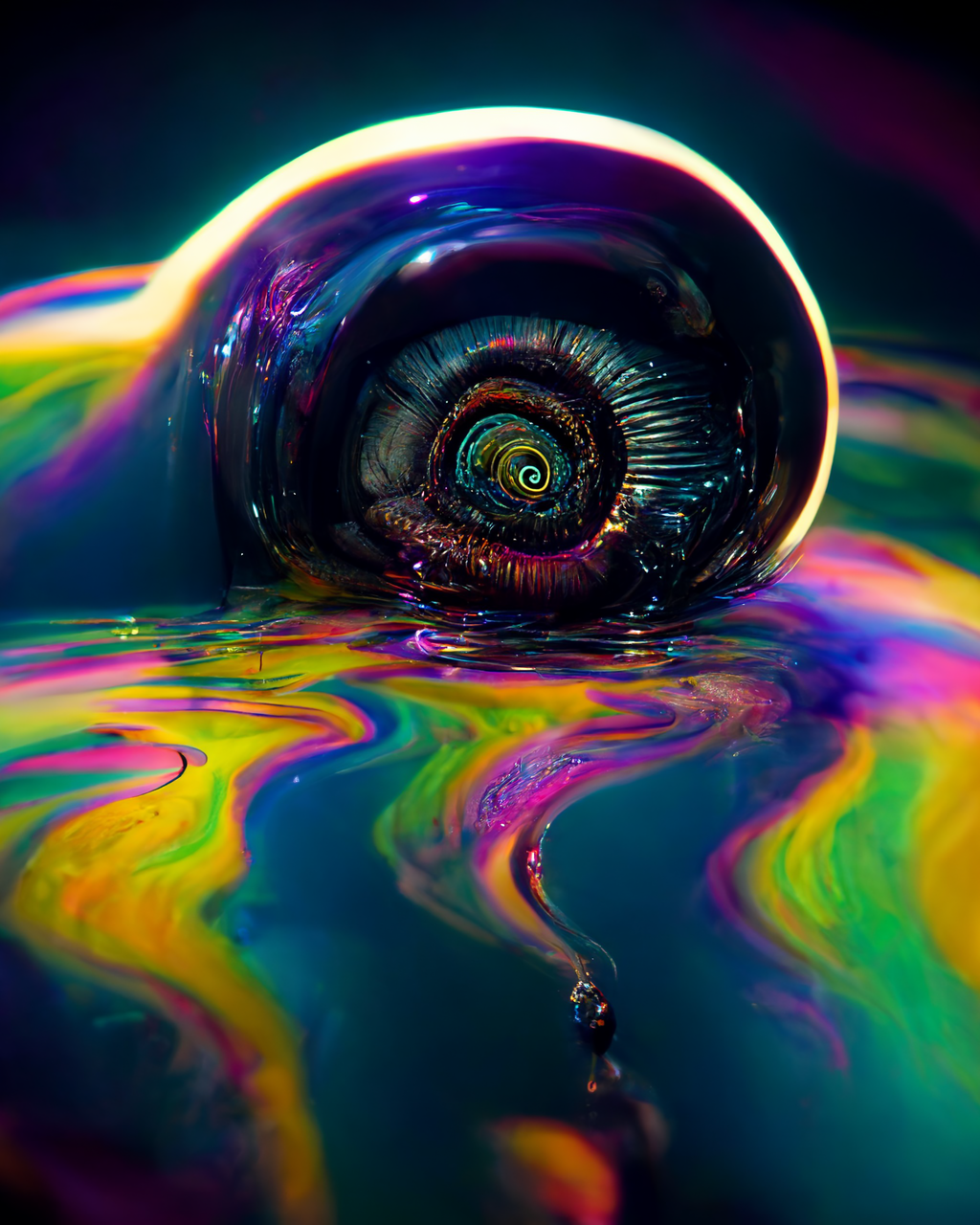 by Hanhula / Midjourney
Patala, the Descent

Answering: "A lost or discovered monument."
Visit Qurilion's Competition Page Check all other answers to this prompt Competition Homepage

Great article! And amazing illustrations too, good work from you and Hanhula!. You did a great job with the description and making it all very visual and striking, and the images are the perfect complement to that :D   I really love how you illustrated the path with Aldara's journey, but you cut off at the best moment :p You also sent me hunting articles about the spectres, labyrinth and all of that XD I'm very curious about the whole purpose of this spiral construction now... It seems a bit too altruistic to have it just as a religious thing to allow people to master themselves and become better XD I'm also wondering how much the slashed mesmerrack at the entrance is influencing everything...

Thank you very much! I wanted to try something different for this one, so I decided to try and write from the eyes of someone going through it. And of course I did, it's how I'll get you all to read the novel! ;D   And one might say the first step is the most important... *Dun dun dunnn*

I've been waiting for this. I love creepy and shiny laberinths and this one went beyond my expectations. It's great! But now I'm worried for Aldara :(( and I have so many questions!!! Great closing article for the story you created this SC <3

This one is the perfect marriage of writing and art. The images—both visual and textual—haunt me long after I leave the page.