Warning! This Character has NSFW content in his backstory, if you are uncomfortable with this, please do NOT read anymore.

Create a love interest NPC for one of your PCs.... and add consequences!

Salar was born and raised as a deck cleaner. Every day he'd get up, take out his cleaning supplies and made sure his ship was spotless. He soon raised in the ranks of this ship and began to be exclusively taught by the Captain of the ship the ways of fighting. He managed to learn how to fight quite easily, and Salar was able to aid in the battles involving the ship. Unfortunately, Salar was disrespected by most people on the ship for being a Tiefling. Every slight negative action done by him would result in insults and criticism. Though Salar wouldn't give up, if a Scrawny kid wanted to make his mark in the world, then he better become as strong as possible. He honed his skills, being able to learn a thing or two from some scripts found on abandoned ships or settlements. Sadly, Salar was kicked off of the ship he was raised on for being unable to aid in a battle which left a cannon sized hole in the Captain.   In exile, Salar would slowly learn about survival, making his way across Terio until his journey would take him to Casshire Island, where he volunteered to work as a deliveryman for The Eccentric Elf. He aided in some contracts and managed to earn some money until he reached 15. He saw that the Elf did wrong, and wanted to get back. So he decided to try and ruin his life. He managed to destroy a few convoys and lookouts across Terio, but none left a mark. The true mark he left was with The Elf's Daughter, who was the same age in Half-Elf Years. He managed to flirt and seduce her in no time. Her father found out and had his daughter killed for such 'heinous acts'. Though a good time from his daughter, Salar had stolen much more. He had taken riches, contracts and even a few spell scrolls.   Now he had claimed his revenge, and had no goal left, Salar had decided to settle down near a beach with a boat to himself. Soon he would see another boat, and then another, in the same place. Soon he saw that it stayed immobile and decided to swim to it. He had taken about 20 Minutes until he had managed to make his way to land. This led him to the beginning of Boatlandia, and managed to make new allies which'd last him for years. With the likes of Creo Ignam and even Tanurrakk when they met with Gørmand, Riree and Grog in Session 19 . Though in the time between then, Salar had mastered his skills of fighting and managed to become a Battle Master. He made his own forms of combat and managed to set up a mercenary service and train some hirelings into shape. His notability became prominent, soon deciding to take a year break from being a powerful fighter to explore Aitso. He managed to become allies with many through his journey, and kept in contact with them using Sending Stones. Salar would soon meet with the King of Raman. The King gave him a job to find where an object to extend life was located in Halland Island. He soon came to the conclusion that this magical item belonged to the settlement known as Morta Dungeon After a couple weeks of searching in the second layer, Salar had taken an interest in the 'mystery prize' of the Coliseum if anyone could defeat the Gladiators. He soon claimed the prize, which made him gain a rune to increase life expectancy. He managed to escape and give this to the King of Raman, giving him another 200 years of life as a human. Though Salar got nothing in return as new laws got placed on Contractors from outer areas of the The Hallandary .   Salar was outraged by this, he was promised a reward but was given nothing in return. Salar would decide to enlarge Boatlandia to make it greater than any other settlement. His efforts went well, but he soon got distracted and began to find new allies instead. His efforts in recruiting allies seemed to become his greatest qualities. He left the other people on Boatlandia to work on making it a greater place, whilst he would go around and make new, fond allies. He managed to Journey to other worlds, being able to make some Sangheili friends in Tyffon against a Blackstone Legion base. His time away managed to get him well known, given the nickname 'Hottest Pirate in the Planet', despite others saying it belonged to an individual known as Loco Poco. The amount of people he could call on for assistance rose into triple digits swiftly, allowing him to gain help for almost any cause using his sending Stones. Salar had also began to write down his fighting styles in a large book known as Salar's Combat Compendium. It holds mostly what he has learned in his journeys, especially with the likes of the Chitine and Sangheili.   Though Salar soon decided to stay at Boatlandia, not wanting to leave it behind and focus too much on other places. His business grew, and despite not being leader of the Settlement, he is the most recognisable and well respected people on the collection of boats. Wherever he would go, he would be a recognisable face.

Towards Salar, the Great Battle Master 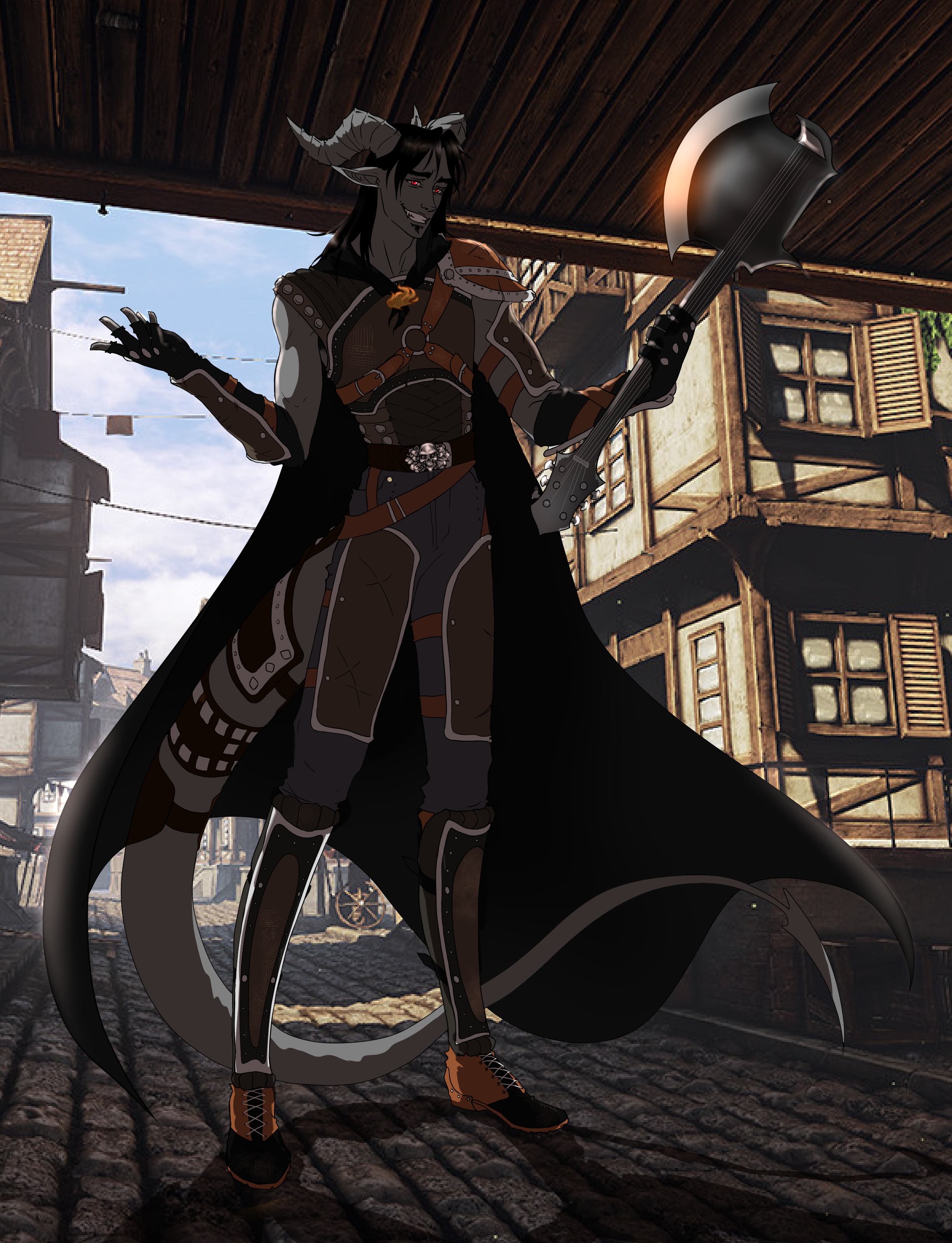 Remove these ads. Join the Worldbuilders Guild
Terio
In response to the prompt Create a love interest NPC for one of your PCs.... and add consequences!

Tweet
Join Abholos Discord!
All Images and Other forms of content do not belong to "Saizo Hoshido" and to their respective creators. I (Sai) do not pass off any images or inspiration as his own, and uses them out of recreational, non-marketable use, for Dungeons and Dragons 5th Edition Sessions. All things used from www.dandwiki.com belong to their creators. If you are one of the creators of something i have used, please get in touch in any way possible. All Crossover material belongs to the creators and are made for non commercial use and for entertainment use.

Unbridled Fury. In response to being hit by a melee attack, Salar can make 1 melee attack with his Armblade with advantage against the attacker.