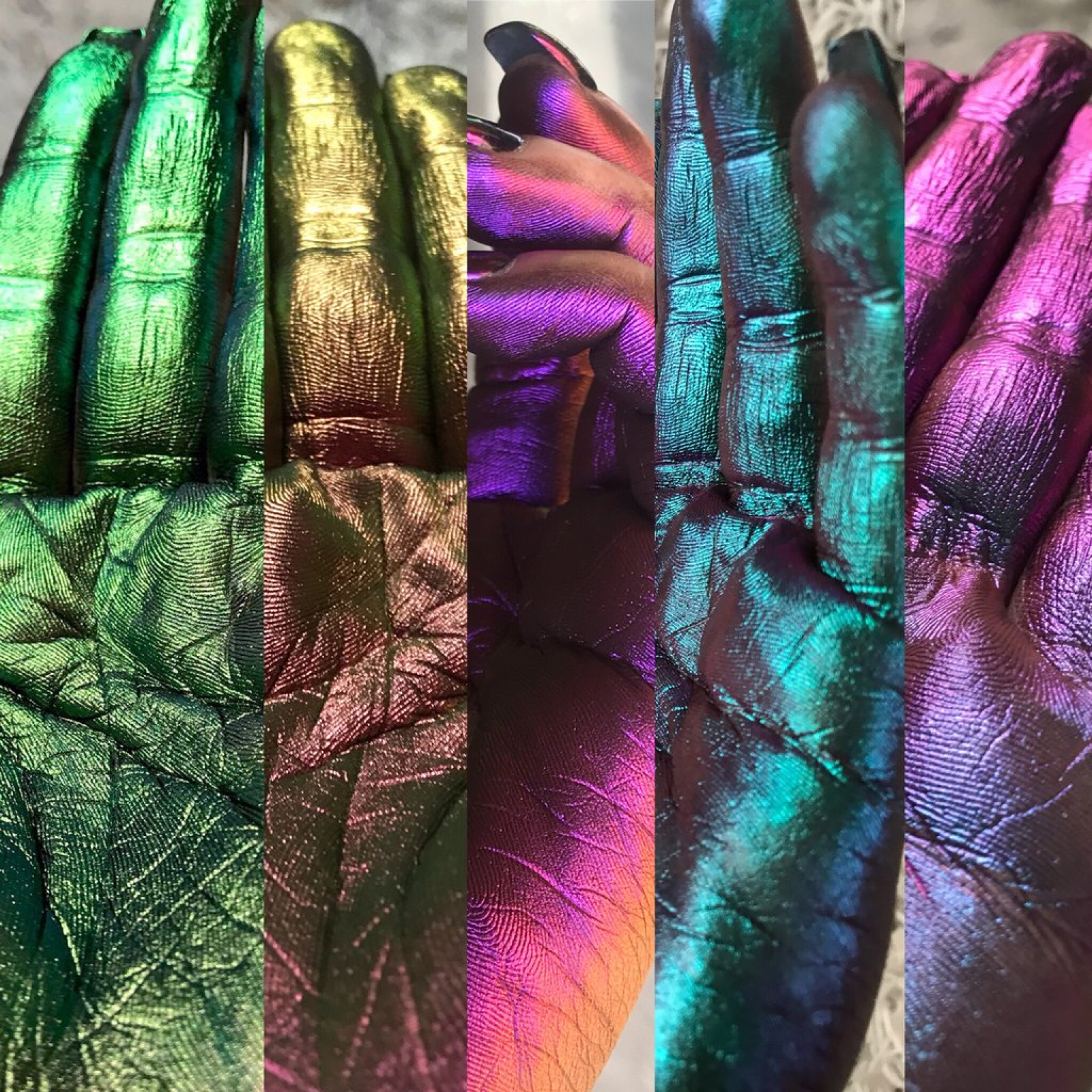 Use the basic stats for humans. Add the following edge: attractive (minor), and add the following hindrance: thin skin (minor). This is in addition to the standard penalties associated with being an obvious DeeBee. Their human proportions do enable them to pass for human with the proper disguise or concealment.   Secret Note: There may be a secret occult society of W'Kell whom have learned how to display false colors. Such a discipline would shock all of W'Kell society were it to be made known, and so it is kept a tight secret and passed down to only a chosen few.
Known across the lands as Rainbow People, these beautiful and peaceful conformists are incapable of dissimulation as their moods and emotions are displayed for all to see in their iridescent skin. This has also given them the slang moniker "Mood People."

The same size, shape and physiology as Earth humans, with the exception of their hair and pigmentation. Males typically do not get as muscular as human males, however, since their history has had little warfare. They are omnivores, and they do have hunting; so there is still some amount of sexual dimorphism in bone density and muscle mass similar to humans, just not as much so. Their skin is usually deep black. Their hair appears to be comprised of translucent crystal scales in bright red orange green or blue. Rarely will W'Kell possess more than one color in their hair.

Insects and mushrooms are a favorite food of W'Kell. Their unique chitin polymers are essential for a bright irridescence. Fish scales also contain the same polymers and can be dried and powdered for ingestion. This powder is tasteless, however, and is only used as a dietary beauty supplement or included in body lotions to enhance their natural iridescence.

Because W'Kell are incapable of hiding their emotions and moods, they are simultaneously very understanding and sympathetic people and at the same time completely lacking in empathy based upon body language and speaking tone. They just never needed to develop the ability to read other people or pick up on facial cues the way humans have.
This phenomenon has had an interesting effect on W'Kell entertainment, specifically storytelling. Since acting is basically an unheard of profession among the W'kell, for obvious reasons; they have instead become adept at storytelling. Epic lyrical poems are popular and successful bards who can emote the feelings of the stories with their own colors are highly sought after. Even better bards can so engross their audience as to cause them all to share their colors at the same time, like an orchestra conductor playing the audience. But the best bards can emote different colors among difference audience members to play them off each other, adding even more drama and comedy than the poems themselves bring with them. These skills have been so developed and passed down among the W'Kell that you would be hard-pressed to find better storytellers anywhere.

Splugorth and their nefarious allies would eagerly try to find a use for W'Kell skin, hair and eyes. The mood-sympathetic properties of these materials could be valuable in the right markets.

Dear reader, you may not be aware that on your native Earth humans are a rare exception on your planet in that the sclera of your eyes is visible, white and unpigmented. Some believe this is coincident with your evolution as a social specias as the amount and shape of visible sclera is a major indicator of mood and intent and can be used to communicate non-verbally. Unlike humans, but like other Earth-native species, the sclera of a W'Kell eye carries the same pigments as the iris, and so their entire eyes appear to be black and iridescent, all colors and yet none at the same time. The stronger their emotions, the more their eyes settle into singular colors corresponding to the emotions felt. This color shift is consistent with the color shift of the skin (see below). Thus, the function of the white sclera of human society is performed by the pigment of the W'kell their society.

Concentrated primarily in Tolkeen and the Colorado Barony of Hope, W'Kell can also be found in small numbers across Western North America. There may be some in the Federation of Magic or off adventuring somewhere.

The more iridescent their skin and the brighter their hair, the more attractive they are considered. Both male and female grow their hair as long as they can. Since they generally avoid violent combat-oriented occupations, they have no historical compunction for their males to wear their hair short.

A mate who can show off the brightest colors of love, as publicly as possible, is sure to steal any heart.

Truthfulness is highly valued. They know they are less capable of discerning lies and dissimulation and so value honesty far more than most any other race.   W'Kell do not experience embarrassment by having their emotions exposed. While they would perhaps be embarrased due to failure and proudful due to success, their inability to keep thoughts secret does not contribute to this.

W'kell read, write and speak Gackle. Those who have been in North America long enough, are capable of speaking American as well. Literacy in American is on par with the native populations.

Since the palm of the hand is one of the locations on their bodies exhibiting the most pronounced coloring (along with the lips, ears, neck and shoulders) it is common for W'Kell to raise their palms to each other in greeting. This is so similar to the human act of waving that the two races immediately got off to a good start at first contact.

W'Kell will usually bare their shoulders when dressed for social occasions. This exposes their brightest iridescence.   Their hair is also usually kept behind their ears for the same reason.

The Rift that first brought the W'Kell to Earth remained open for over a month. At the time, the home technology of the W'Kell was on par with Earth's 19th Century. Several adventurous expeditions came through willingly. As is usually the case, their appearance was met with a cadre of curious shifters who attempted to learn the dimensional coordinates of their homeworld.   Since then, several intentional rifts have been attempted in which more people came across to Earth or returned to their own planet. Subsequent immigrants to Earth consisted of the most hardy and adventurous souls, if not the most desperate.   The first visitors to Earth were quite accepting and open to establishing friendly relations. It is just in their nature to do so. However, their encounters with human supremacists from the Coalition States and 1st Apocalyptic Cavalry ended poorly; and their complete gullibility to deception, grift and betrayal left them even more desperate. The survivors ran to Tolkeen for shelter. Subsequent immigrants settled in the Colorado Barony of Hope.

W'Kell find the varied hues of human skin to be exotic and appealing; but they also find the mystery of human emotions to be frustrating and difficult.
The image above is a sample of some of the moods of the W'Kell.
Scientific Name
Prismapsyche Sapiens
Conservation Status
There are only a few thousand on Rifts Earth, concentrated in two primary communities, the largest in Tolkeen has over a thousand and there are over a thousand in the Colorado Barony of Hope, most in the city of Hope itself.
Body Tint, Colouring and Marking
Obsidian black skin, with a fascinating rainbow iridescence that will change its colors based upon the person's mood and emotions. The stronger the emotion, the more intense the color of their iridescence. While all their skin displays this characteristic, it is most prominent on their lips, ears, neck, shoulders, the palms of their hands and along their spine.

W'kell hair is not hair as humans know it. It is more characteristic of scalelike crystals than filaments. It is singularly brilliant red, orange, green or blue and stays that way despite any moods or emotions felt. Rarely a yellow haired W'Kell will be encountered, and W'Kell will almost never have more than one color in their hair.  W'Kell eyelashes share the same color as the hair on their head. Their hair is so brilliant that, next to their black skin, gives the impression of gow-in-the-dark flourescence. It does not glow in the dark, though.   There are some theories that hair color is an indicator of a W'Kell's predisposition to certain moods, but it has not been shown if the expectation to see the correlation leads to it or if there is an actual correlation.  It is much like how Earth redheads are known for their short tempers, whether there is any evidence of greater predisposition or not.   W'Kell body hair consists of miniscule hairlets covering the epidermis and it is these that cause the iridescence so unique to the species. These hairs are most dense on the shoulders, neck and ears, even exibiting some fern-like branching when viewed through a microscope, causing those areas to exhibit the brightest iridescence. Interestingly, the palms of the hands are actually coated in fine scales, causing them to also exhibit a strong iridescence. These scales also provide a bit of protection similar to the calluses typically seen on humanoids, but without the work needed to create them.   W'Kell anthropologists claim that the W'Kell species evolved from a scaled progenitor that in turn shared an evolutionary branch with feathered species, since there are reptiles and birds on their homeword that also exhibit iridescent scales and feathers, respectively. Although some of them are able to change their iridescence when angered or as a mating display, none but the W'Kell themselves have such a wide range of colors tied so closely to their emotional state. They believe it is this breadth of expression that spurred their progenitors social evolution and let to their intelligence and sapience. Why their hair does not change color seems to be their biggest mystery. The current theory of their hair color is that they were once separated into geographically disparate tribes, and this was a means of identifying friend from foe or was due to some environmental factors. This is not too dissimilar to how humans claim their own different racial identifications came from their geographically disparate evolution.
Moods of the W'Kell Rainbow People: The iridescence of their skin is capable of showing multiple shades and hues of the above moods. For example, if a W'Kell likes someone, but worried that their feelings are not returned, they may exhibit both a violet and an orange sheen. Likewise, a group of friends hanging around the fire on the holidays, laughing at tales of their past exploits may exhibit both a blue and green sheen.
Furthermore, the strength of the emotion determines the vibrancy of the color in both brightness and coverage. Also note that the moods encompass the entire range of hues, not just the discreet colors shown here. So as a W'Kell goes from serious to worried to afraid, for example, the hue of their sheen makes a gradual transition from yellow to orange.

What a delightful species! This will bring great dynamics to games!