Having a character on Heroes is necessary for players in an RPG campaign, but it can also be useful for writers and worldbuilders in general in order to find the voice of that character.

On your Global Dashboard, click the My Characters button (or the Characters link in the left sidebar) and click on the Create a new Character button, at the bottom of the screen. If you have never created a character, this page will be empty, but otherwise it will contain all your Heroes characters.   Once you click the button, this form will appear: 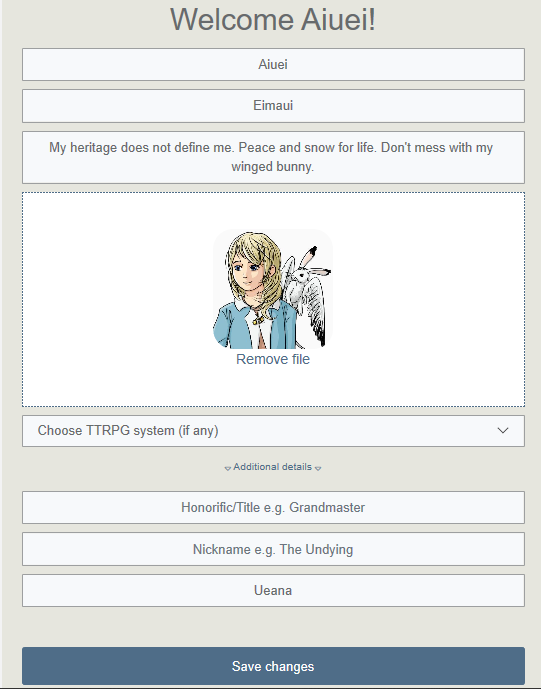 In the above screenshot you can see an already-filled form for a character called Aiuei Eimaui (see her current profile here: Aiuei Eimaui). This information will appear in your character's public profile, and you will be able to change it later. Click the save button to finish creating the character! 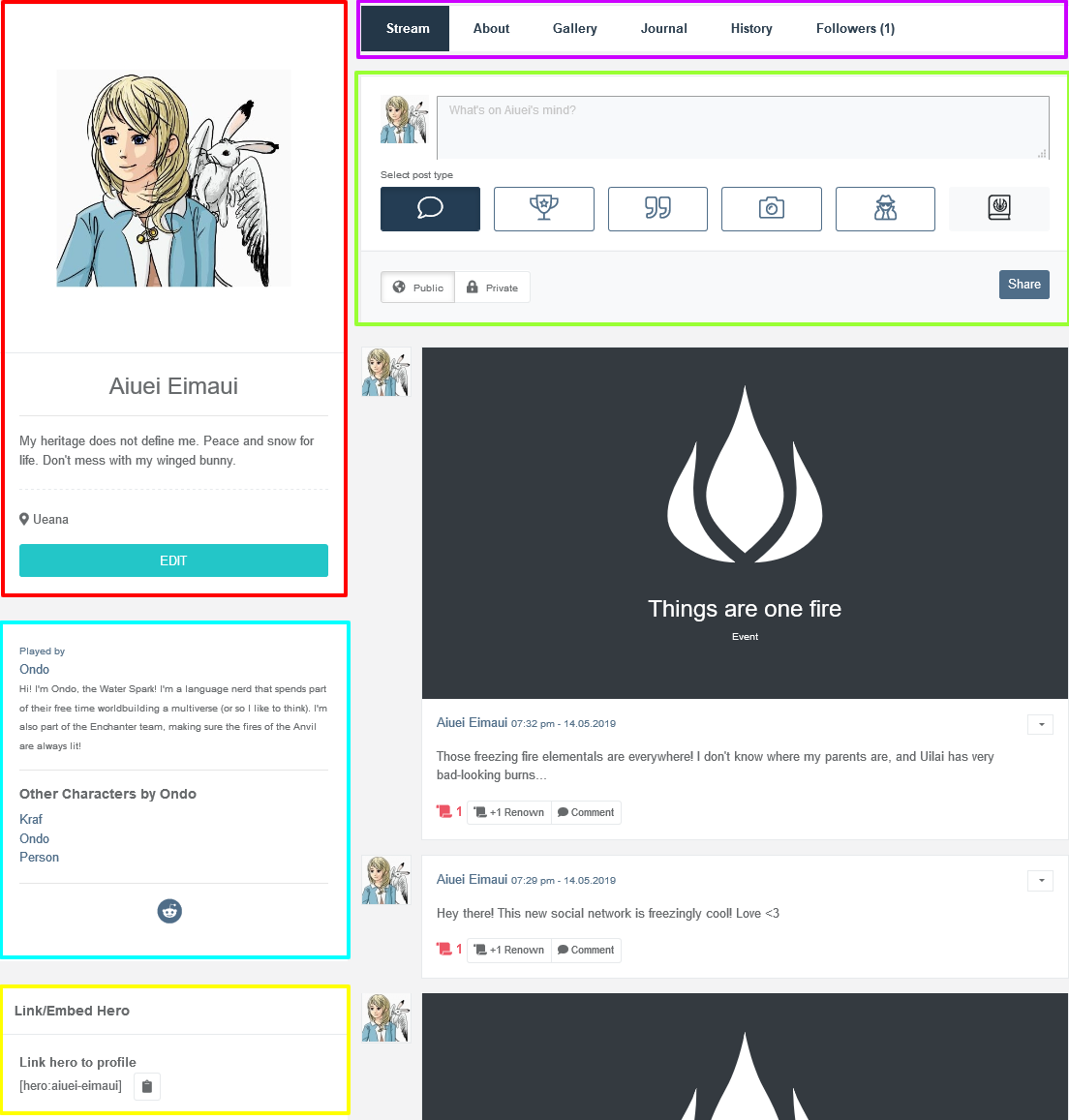 Let's break down its different elements:

In order to fill in the About section of your character, click on the Edit button of their profile. A new page will open with the following menu bar:

The Basic Profile tab is just the information that appears in the simple profile box, what you entered when creating the character. In order to add content to the About section, you need to go to the Extended Profile tab. This will open a form with multiple text boxes, similar to the character article template. Fill them in as you wish and click on the Save changes button at the bottom of the page to update the profile!

If you are a Guild member, there are three more options you can set for your character:

What can I use characters for? Heroes helps you give life to your characters! Thanks to its social network-inspired design, all characters can interact with each other, which can help you develop their personality and history. Additionally, you're also able to use your characters in an RPG campaign, since Heroes is also a campaign manager!   Will my characters be public? Yes, all characters are public by default. If you are a Guild member, you have the option to set them as hidden.   Can I track my character's stats? If your character has an associated RPG character sheet, there will be an additional Sheet option in the menu bar of the character's profile. Not all character sheets have a trackable version, but, if they do, it will appear there, allowing you to track your stats directly from their profile.   What about equipment? You can also track your character's equipment from the Equipment tab of the profile's menu bar! You can add an item name, type and quantity.   Can I edit my character from the world itself? Yes! Edit the character profile and connect it to their campaign world. After the page reloads, you'll be able to edit the character directly from the worldbuilding interface (instead of Heroes).

If you go edit your character and look at the right side bar, you will find this box: 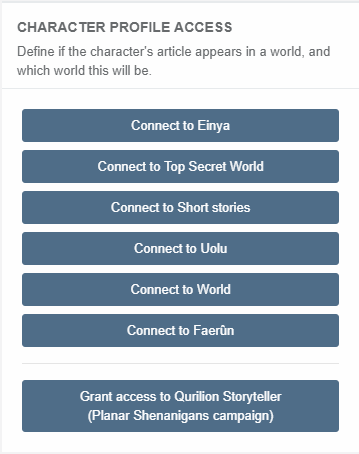 Using the button at the bottom of the same box, you can give the GM of your campaign edit access to the character (provided the character has joined a campaign).
Campaigns & Characters

how do I delete a character I didn't want to make?

Hi! You can connect a PC with a world by editing a character from the Heroes interface and using the sidebar ("Connect to [world]" button). This will automatically create an article in the world using the information you provided in the character profile. You'll be able to edit the article/profile from "both sides" IIRC. I don't think there is a way to merge a character with an already-existing article, but the character article template and the Heroes profile both have the same fields.   As for the second question, you can just edit the NPC -> "Make NPC to PC" section in left sidebar -> enter the player's username.   Hopefully that helps!

Perhaps I'm being really daft, but I can't find this NPC-->PC option anywhere. What screen is it in?

Ah, marvellous, thanks! The step I'd missed was adding the character into the campaign in the first place. Sorry, still very much the noob.

Hi there, I would like to know: 1. if and how I can get a new RPG system into the available selection? 2. can I connect a character to more than one system? i.e. I would like to use DSA (the dark eye) stats as well as D&D

Hi! For the first question, not all systems have character sheets available, as it's a volunteer effort (there are so many systems that if the WA developer made them, he wouldn't be able to do anything else!). Unfortunately, only Grandmasters (and above) can create new templates for sheets and blocks for a system that does not have blocks yet.   As for the second question, I'm afraid that's not possible currently!

Hi, I can't answer your questions, but I just wanted to give you a signal that I might be working on a template for DSA5 - but that might also take a several weeks (I am fairly new to the System). I'm currently facing the same problem that I'm using a mix of DSA and Pathfinder (I know it's not D&D :-) ) for a single campaign. BTW: You don't happen to play the G7? :D

Sorry mate, I primarily play homebrew and even that mostly in our own world. Furthermore, only have basic knowledge of the G7. Still, thx for the DSA5 info.

Hi A few of my characters have created elements of their backstory that are secret. Is there anyway to filter who can see that information? If they connect their character to my world and therefore create an article, can I set that information to secret to hide it?

Hello,   Yes, you can use secrets (Guide to Secrets) to make some parts of the content private, because you're a guild member. They should work in character profiles too, but I'm not sure.

Thanks, got that all setup now.

NPCs are created in the campaign, "Supporting Cast (NPCs)" section. Using the world editor, you can create character articles, which use the same template regardless of the character being an NPC or a PC. Character articles and campaign NPCs can be linked though; when you are creating the NPC, there's an "Advanced options" dropdown that lets you choose a character article to link.   PCs can't be transformed into NPCs, as they are controlled by the player (although they can give edit access to the GM).

Thanks ! How can a player give access to the GM in edit mode ?

Edit the character profile, there will be a button in the right side bar. You have an explanation and screenshot of the interface in this guide, under the FAQ!

As a DM, can I make heroes for my players? They have their printed character sheets, but I want to use WA characters for note taking. And how can I let my own hero (as a character) join my own campaign? Because I want my own character to be the chronicler.

Hi!   No, PCs need to be created by the players themselves (although they can then give you access to their virtual sheet so that you can edit them). As a workaround, maybe you can create them as NPCs?   If you want to have your PC be in the campaign you are DMing, just copy the campaign invite link, then access it with the PC activated. But the system is not designed to do that (since DMs generally don't have PCs) so it's not the mos straightforward thing to do.   Hope this helps!

How can one of my PCs choose D&D 3.5 as their system? With one player I got the correct Character Sheet by making them create a new world with 3.5 chosen. Then when we went back to editing the character a "D&D 3.5 Character Sheet" option had appeared. I just tried to do the same with another player from our group, but a 'create new world' button is nowhere to be seen. This all seems a bit wonky as we ultimately just want 3.5 edition character sheets that I as GM can edit.

Hi! That's probably because dnd 3.5 does not have an adapted character sheet. It seems that you found a workaround though, so you can tell your player to enable Worldbuilding features from their account details and the new world button will appear.   For you to get edit access to their character sheets, tell them to edit their characters and click the "grant access to storyteller" button in the right sidebar.

Thank you! 'Enable Worldbuilding features' was the step that we had missed :)