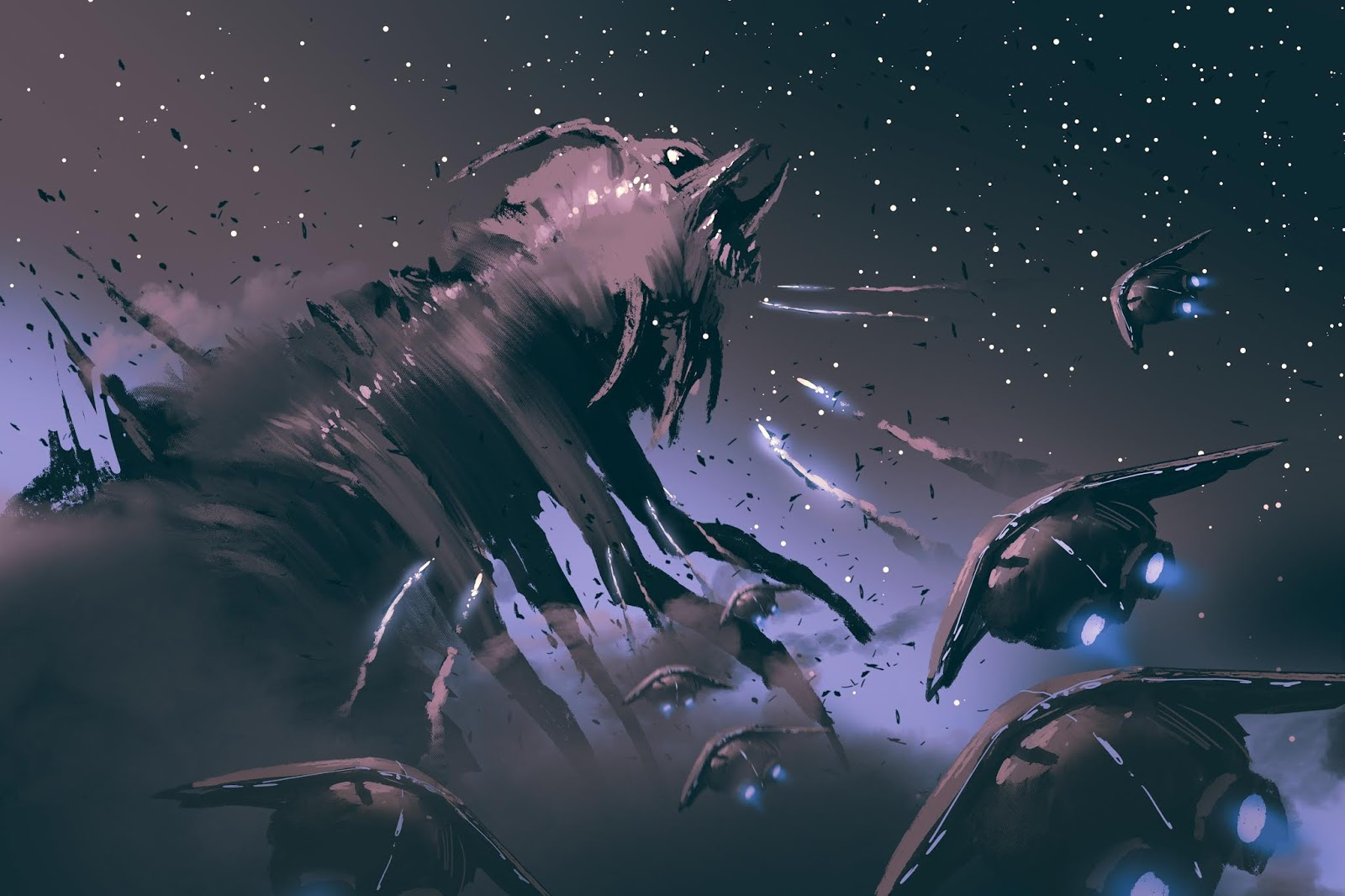 Life in The Void

The ship’s engines roared to life as the Wayfarers rushed aboard. The Calstine rose from the red dirt and darted into the sky. Mouse sat staring at the screen, eagerly waiting for the Higgstech to kick in and loosen the grip of gravity weighing down on her.
She still couldn't see it, but she felt the creature writhing in empty space. She tried not to stare. She didn’t want to see it. She could make out a faint outline, and that was enough.
Oracle sat beside her, and his eyes were glued to it. “I-” he began, tilting his head in confusion, “I don’t think it’s coming for us.”
The creature moved across the space between the sun and the beast’s destination. The tendrils that danced through the void whipped and drifted in chaotic curls. Oracle looked over to Mouse. “Take the ship off autopilot. It's too big. You’re going to need to fly manually in case we need to dodge a wayward limb.”
She pressed a button and panels along the walls, floors and ceilings rotated, revealing screens hidden underneath. They flickered on, each adding a feed from an external camera and forming a single 360 degree view of the outside.
Mouse controlled her breathing, trying to compose herself at the strange shift in perspective. She felt as if she was floating.
Argos spoke up, “I’m getting signatures of heat on the edge of the system. Looks like nearly 50 vessels, an Eden fleet.” “Easy, Mouse. You got this.” Roadrunner said, his voice shaking. "They won't fire on us. I doubt they'll even notice us."
“We need to get out of here.” Mouse said. “Where’s a good place to warp out of the system?”
“We have to go right through.” Argos replied.
“What?”
Argos tried to keep herself from weeping. “We’re already caught between the fleet and that thing. It’s quicker to just push through to the other side. The Highest chance of survival is on the far side of this fight.”


The tree of life known to us is but one in a cosmic forest. Imagine what strange flora may sprout from the infinite soils of the void, itself. Venturing into the black is dangerous enough without having to worry about what lies in wait out in deep space. Your paranoia is justified. These stars have eyes, and they are watching.   Life finds a way, as the saying goes. Nature loves a blank canvas. Space, as inhospitable as it may be, plays host to many strange creatures. They survive in a vacuum, resisting the endless barrage of cosmic rays. They resist the cold, and express no fear of the emptiness between worlds. They are a prime example of nature’s creativity.   To discuss life in the void requires some understanding of what life even is. To be honest, these beings shouldn't exist. All logic says they are impossible, yet there it is. Let us discuss the intricate subject of space whales and Leviathans. Let us discuss the things that give us reason to fear the dark.

We're in no position to study them. We really don't fully understand how they work. Void life is rare. When not isolated to its origin system, it drifts through space in hibernation, waiting to stumble upon a place to call home.   As rare as it is, there are numerous occurrences of life in space. Most of the time it's nothing but microscopic life, especially if it's carbon based. Most complex organism in the void are silicone based.   We've seen crystalline entities and massive planet sized creatures. Some have slower metabolism, where blinking an eye takes an entire human lifetime. One thing seems almost universal: the creatures survive either through photosynthesis or by breaking down non organic matter.

In case it hasn't occurred to you: Your ship is made of inorganic matter. We have a few accounts of void life trying to tear through a ship's systems. Most of the time. Especially with the largest examples of void life, they barely register our existence. When they do, however, be prepared to strike.   It's widely considered a good idea to avoid these creatures, but sometimes it is inevitable. Some creatures threaten the existence of our species. There are creatures that eat stars out there, and they don't care what happens to those left without the light. Imagine it: one moment the sun is there, casting its warmth upon you and the next, it's going supernova billions of years ahead of schedule.   It's common for those with means to destroy any unwelcome visitors to their systems. Some species even offer their services to remove particularly dangerous pests. These exterminators travel all over the galaxy seeking to control the population of some of the more troublesome cases of life in the void.

A recent discovery for us are numerous cases of stellar flora. These massive growths can feed on stars for eons, but if starving, they can rapidly speed up the inevitable supernova that all stars meet at their end. They use this initial pulse of energy to blast them off into deep space, entering hibernation till the heat of another star wakes them up.   Another example is what human drifters refer to as space whales. These silicone based lifeforms use webbed membranes similar to solar sails to drift through space. They feed on asteroids along a commonly traveled space route near the core of the galactic community. They have been known to assault nearby ships and can be notorious difficult to kill. Web drifts are particularly dangerous. Spores spread out using the release of built up gas, bonding with other spores to form a large wall or sheet. This will collect debris or even ships, slowly eating it away to feed the entire colony.

Mouse felt her heart beat against the inside her chest. A beam of yellow-green light shot across space from one of the Eden vessels, clipping the creature on one of it’s many tendrils. Missiles raced above and below them, some flying cross the nose of the ship. The Eden fleet broke formation, as if to circle the creature. Several ships were destroyed from the tendrils as they whipped through space. They stared in wonder as another vessel jumped in with a blinding white flash of light. It was massive, one of The Eden titans.
The ship looked as if it could ram a planet out of orbit. Its size alone dwarfed the ships around it. Fins loaded with numerous weapons spread out from its long body. The ship opened fire. Uncounted missile silos unleashed their fury. Countless beams of multicolored light shot across the void.
Mouse held her breath, maneuvering the ship in an attempt to dodge the incoming fire. After several narrow misses, mouse screamed, "Activate warp, now."
"But-" Argos began
"Did I make that look easy?" Mouse asked, her eyes darting across the star field. "We have to go, like right now."
Mouse looked up and saw one of the tendrils crashing down, hitting the ship's shield, and glancing off the side.
The force of her body pushing against the harness on her chair sent a rush of pain through her body. She heard roadrunner scream in pain. She looked over. He gripped his shoulder, groaning in pain at what she assumed was a dislocated arm. She cast a glare at Argos.
Argos nodded with wide eyes, reaching over and rotating a wheel on her console. A whine swelled and echoed off the inside of the ship. Mouse slammed her eyes shut as the lights dimmed. All power was needed to activate a warp drive.
The screens surrounding her went black. The shields were gone, life support shut down, and the last thing they saw was the metal of the ship seemingly bending against the strain before they were plunged in darkness. They sat with hearts racing, waiting to reach safety or be destroyed. Only time would tell.

The Others (Under Construction)
Cover image: by Adobe Stock 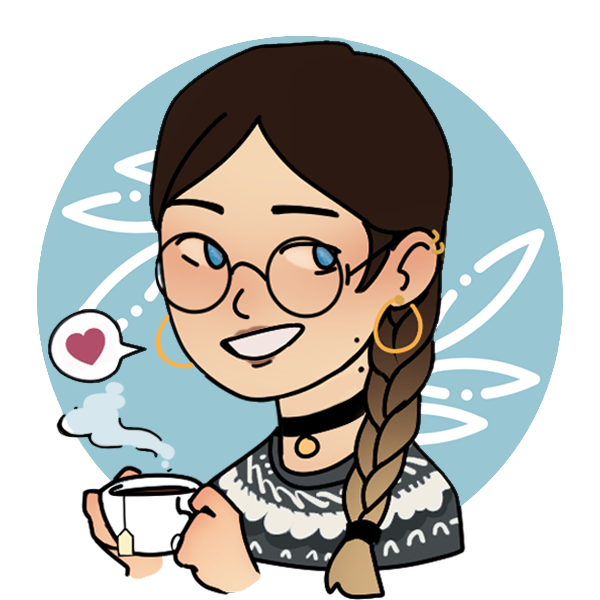 Hiyaaaaa yeah no thanks, omg

Space-borne life is really cool! When I was a kid I loved the Crystalline Entity in Star Trek TNG

thanks! I actually havn't seen that one. MAy have to fix that. it sounds interesting!

Ooh. Super cool. I like the idea that there are silicon-based organisms within your void setting. Is there a scientific theory behind this? Based on what basic biology I've learned, the process of cellular respirations--aka, the creation of energy--relies upon the separation of glucose molecules by using oxygen as a catalyst. This wouldn't be possible in silicon-based life within the void.   Also, obligatory notice of the fact there are a number of typos: "void, itself" doesn't need the comma; "non organic" should have a hyphen, "notorious difficult to kill" should be notoriously, and more.

Yeah. Sorry bout the typos. I'm trying to whittle them down. As far as the science, it really seems to depend on who you ask. From what I've found the real problem is less about oxygen and more about silicone itself. It cant make the super complex molecules carbon can, but there is a tiny chance. Microbes have been proven so I suppose I really should post some of those sources but this decision was another thematic one, much like the quantum telegraph. The reason is I like the idea of aliens being outside of science as we see it. I like the idea of science being wrong on a small level when it comes to alien tech and even biology. It gives a special otherness to it without making them straight up supernatural or godlike. They follow most scientific principles, but occasionally something doesnt. I try expressing that These creatures shouldn't exist, yet somehow they do for that reason. Thanks so much!

They are fascinating! I wonder if one could attempt to live on them, if they are that big.The prose is fantastic, and really does a great job of showing just how huge and terrifying these behemoths are. Awesome article!!

Thanks so much! They are definitely scary.

Thank ya! I'm glad it worked out.

You've been really knocking it out of the park with these horrors, and the prose alongside them!

Very cool concept. I was on the edge of my seat reading the story!

When reading your last article, I thought "hey, what if there was a creature the size and strength of a titan-class ship? that would be an epic battle!" You just went above and beyond.   I was thinking maybe that some void creatures would be as thinly spead as the void itself; basically just clouds of gas that interacted with themselves in a way that made it alive. Virtually undetectable, since the thin mist of the void is normally something you look 'through' not 'at'. Now I'm just wondering what troubles this being and a passing ship could get eachother into...   Some creatures eat stars you say? my c'thulu theory gains weight...

I will neither confirm nor deny the existence of creatures beyond space and time lingering in The Void Between... oh hell. It is me. Of course their are, but some are not the all powerful godlike beings of yore. This particular beastie in the story of this article is basically a space tumbleweed... a very large and dangerous space tumbleweed... that likes to eat stars... we are all made of stars...