Titles: Saint Jericho the Enlightened, The Unbound, The Sage of the Sixfold Paths, The Steelarm Striker, First of the Awakened, Last of the Dead   Favored Weapon: Unarmed Strike   Alignment: Earth   Elemental Lord: Okmog, The Calcareous King   Obedience: Spend one hour practicing your unarmed strikes and meditating on the path to enlightenment - on letting go of the self, one's ego, and worldly desires. Take one copper, silver, or gold piece and carve a hole through it, and wear it around your neck for the rest of the day.   Effect: Gain a +4 bonus on all Knowledge Checks. Gain any two knowledge skills of your choice as class skills.

A cloud with two rubies inside it

Survival above all. Place the survival of yourself and those around you above all else, and foster the strength to do so in yourself and others so they may walk the path.

Simplicity behooves an enlightened soul. Eschew normality, and embrace the tranquil simplicity of a life in search of enlightenment. Let all unneeded things fall away before study and the Sixfold Path.

Mind and body must be aligned. Master your own body and mind, and learn to shape both to your liking. Always seek to better both through training or study, and manage what goes into both rigorously so as not to poison either.

Enjoyment is fuel for the soul. Without happiness, a soul cannot hope to ascend. Seek bliss and enjoyment, but do not shy away from sadness and grief.

He who abandons Ego, embraces eternity. Learn to let go of the self and one's ego - be at one with the world around you, and live a humble life without the corrupting lens of The Self.

Keep your karma in balance. Never turn down another in need of wisdom or guidance, and balance out acts of selfishness with acts of selflessness.

To lead life to its ultimate fate - total deshackling of the self and true enlightenment of the soul and spirit.

Jericho's followers, as one might expect, are predominantly monks, priests, and other Ascetics who seek a monastic way of life, who wish to better themselves through rigorous training, or want to improve their lives by cutting out the hustle and bustle of the modern world and focusing on the simple things. Jericho's followers can vary wildly, as any no matter their race, ethnicity, or nationality can understand and yearn for enlightenment and self-perfection, and in this way their following can be found all across Zheng-Kitar, scattered in various monastaries and temples from Seoghar to the Dharan Alliance. Unlike monks who follow the monastic traditions of the Yema, other gods, or who practice outside of Zheng-Kitar, Jericho's followers do not strictly belong to a hierarchy - they believe in giving due respect to senior members of their faith or monastary, but there is no requirement for strict obedience to one's superiors.   Instead, Jericho's followers are expected to make decisions collectively through regular gatherings of the faithful, at which decisions regarding violations of monastic rules and the dispositions of communal property are to be made. Individual relationships of teacher/student, senior/junior, and preceptor/trainee may be observed among groups of monastics, but there are no formal positions, nor is there any authority to give orders or commands invested in senior monks. An abbess or abbot, typically a senior monastic still young enough to be active, is usually responsible for the day-to-day administration of the monastery, and may appoint others to assist with the work. In some traditions, the abbess/abbot is chosen by a vote of the monastics in a monastery. In other traditions, the abbot is chosen by the lay community around the monastary or faithful. It is a common occurance in the communities around a monastary for families to send their children to the nearby Jerichan Monastaries when they come of a young age, to study with the Jerichan monks for a variable period of time(Generally one month), learning and living as they do then returning to their families when the time is over, with those who show an interest in the lifestyle returning a few years later once they become adults to live as a Jerichan Monk for good.   Typically, as part of their initiation, Jericho's followers shave their heads to signify their devotion to the Sixfold Paths and the abandonment of their worldly desires - they tend to don robes or other easy to wear and free-flowing garments unlikely to restrict their movement, with the exception of a unique piece of gear all adherents to the Jerican faith don: The Hands of Jericho. These metal gauntlets are typically forged from thousands of tiny metal scales placed over leather, to allow for freedom of movement in battle and to enhance their battle prowess. These gauntlets are symbolical of their Patron Saint, who is said to have had their arms from the elbow up dipped in molten iron during their lifetime as torture - which stuck to their skin like glue and eventually hardened into a metal sheath around their arms. These gauntlets are not removed save for extremely personal or dire situations- to remove them in the company of others is tantamount to sacrilige to many sects of the faith, as they act as both displays of tenure, rank, and experience, but also physical manifestations of their dedication to the Sixfold Path - physical weights which symbolize the weight one must leave behind from one's Ego and Self if they are to achieve enlightenment. These gauntlets are typically removed for good only at the end of one's journey, at the last step before true enlightenment - symbolizing the unshackling of the self and the ego as one becomes as their Saint - one with all, neither living or truly dead.

Though the specifics of their monastic faith can vary from sect to sect, the followers of Jericho believe in rigid adherance to "The Sixfold Paths" - Six Truths that one must learn, embody, and completely master if one is to reach true and total enlightenment. These Paths were said to have been laid down by Jericho themselves before their ascension, and are central to the Jerichan creed - they practice strict asceticism in line with these six tenets and values, abandoning the more complicating trappings of modern life in favor of simple lives focused around study, practice, training, and self-perfection - meditation is key to them, and is done at specific points throughout the day without fail barring extraordinary circumstances. This is all done in pursuit of the ultimate goal all Jerichans hold at the heart of their faith - enlightenmant and ascendance into the same state of being that Jericho themselves once reached so long ago, where one sheds their corporeal form as their mind merges with the cosmos as a whole, becoming one with all things and reaching a level of existence beyond mortal comprehension - not truly alive, but not truly dead. This, they believe, is the ultimate and final form of life itself - perfect spiritual beings at one with all things.   Members of the Jerichan Faith also believe heavily in Karmic Balance - the concept of balancing out one's own personal karma to not fall too heavily into either "light" or "dark". They do not go around comitting evil acts for good, but instead believe that, as inherently selfish creatures, mortals lean heavily towards negative karma - representing selfishness - and that to reach this state of balance, one must balance out their own inherent selfishness with acts of selflessness or "good". They hold the notions of teaching and tutelage very seriously, and see it as their duty to teach others in need no matter if they be of the faith or not - to give them the strength to protect themselves, the wisdom and teaching to better oneself - these acts are sacred to them, and central to their beliefs. Finally, they also believe that all creatures, at their core, require bliss and enjoyment to survive - so while they practice strict monasticism and hold themselves to a simpler lifestyle, they do encourage members of the faithful to find something they enjoy - be it a hobby, a craft, a passion, etc - and hold it close to their hearts. To seek this happiness and bliss is something that betters the soul, and while they are taught to not shy away from despair or sadness, the seeking of bliss is more important to them than the finding of it - meaning that even if a journey ends in failure, the mere journey itself made itself worthwhile to them.

The history of Jericho is murky and unclear, as with many Elemental Saints - it is wholly unclear if the name "Jericho" refers to a singular entity, a collective or group, or even a line of entities inheriting the name like a title. Even the gender is unknown about this "Jericho" figure - but what is known is that they were a being who lived long ago, during the Age of Apostasy - and as they meditated atop the highest mountain in the Tripalm Spine Mountain Range, watching the end of civilization as it was known then, they reached an epiphany of sorts upon that mountaintop as they watched the tyrant Cao Lu unite the world by force. There, upon that mountaintop, Jericho achieved through unknown means what it is believed should have taken life millions more years to achieve - reaching an epiphany into the nature of the soul itself, Jericho unlocked their potential and learned the secrets of how one might ascend into a truly spiritual entity.   They did not go around gathering faithful, nor did they start a monastary - it was there, upon that mountaintop, that Jericho stayed for years until finally, they achieved the impossible - true ascendance into a spiritual being. It was not until much, much later that, as nearby villagers began making excursions to the mountain for food and to train did they happen upon the holy site at its peak - a conflux of spiritual power and holy energy unlike anything seen before. Here, at this nexus, did the spirit of Jericho commune with these mortals, teaching them of their ways and founding the first of their many sects and monastaries. 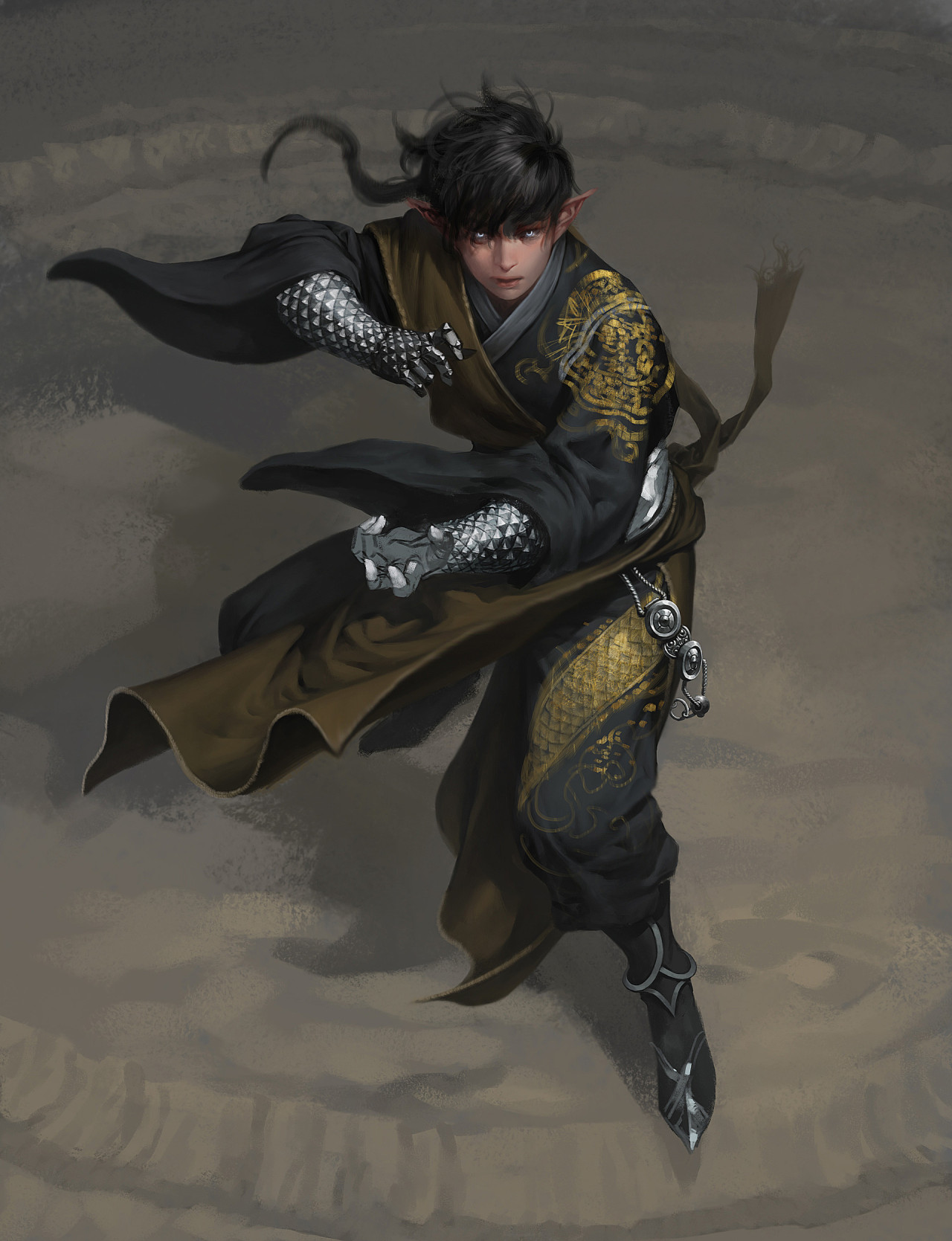 Oath of the Karmic Guardian: For each act of good you do or that you see done, commit an act of evil of a similarly related but inverse nature(EX: Save a life, take a life, Take Money, Give Money, Etc).

Oath of the Stalwart Ally: Always offer supportive words to those you meet who are struggling to get through a hard time, or overcome some enemy or obstacle. Teach and help others to give them the strength to endure great adversity, even if you must first overcome their issues yourself to help them.

Oath of the Shackled: Can substitute one or more monk vows in place of a divine oath. Speak to your GM for this.

The Good Elemental Lord of Earth.