CW // Childbirth
The Royal Childbirth is the highest festival to be celebrated in Ouvezia, despite it being irregular by its very nature. It is celebrated in front of the Temple of Dawn on the Announcement Square in Menoubra. It is an important event to establish the legitimacy of a possible royal heir - Ouvezians don't put much stock in the child's father, since it is impossible to determine whether or not a certain male is responsible for a pregnancy. The mother, though, is a whole different thing, and what better way to establish legitimacy than having the nation witness the heir coming out of their royal mother's womb?   Once a royal pregnancy nears the end, all normal business on the Square ceases to happen. Instead, food stalls litter the edges, and the inns lining the Square are booked up by nobles and foreign dignitaries for months already. Festive decorations are put up, the nature of them depending on the season of the year, but a key element is always intricate lights. The houses around the square have lights all over their facade, often with intricate cut-outs complimenting the house they are made for and providing elaborate light pictures. People sitting on the square bring their own lights, too, to celebrate the new life that is about to come.

Fireworks are prepared for the big moment, and many people set up camp for the last days and nights before the expected date. Musicians, bards and jugglers go around to entertain the crowd, and the atmosphere in general feels much like a fair. It is not uncommon for new couples to find each other while waiting for the royal child - in fact it is considered lucky to marry someone you have met at the event. Pinks, white and pastel rosé dominate the scene, the colors of dawn. 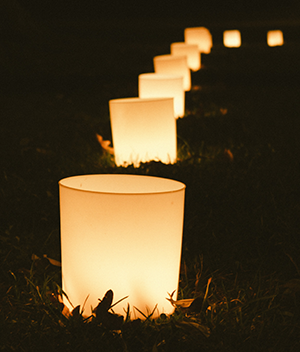 Lamp Lot during Night Time by Joshua Rodriguez
Notably, red is a color that is not found often in Ouvezia as a whole, due to its connection to blood and mourning. Still, showing up in red to a Royal Childbirth is seen as a bad omen and may provoke a strong negative reaction from the crowd - all Ouvezians make sure to mention this to any foreigners they encounter when such an event draws near. At least one former instance where a foreigner accidentally wore red resulted in him bein unceremoniously lynched, with the guard unable to protect him. Coincidentally, the child died soon after during birth, and the queen's sister herself barely survived.   As soon as the birth begins, the mother-to-be will be escorted out onto the platform, with priestesses waiting on her and trying to make her comfortable. Chairs designed to ease childbirth for women are common in Ouvezia, and for the royal family, no expenses will be spared. A well has been dug on the platform specifically for this occasion to provide fresh and clean water, and often incense burners and fires are lit to provide comfort for the mother.   The Queen or the royal mother to be usually moves into special chambers inside the Temple about a month before the expected date. This is both to ensure that she will be there when the big moment comes, but it also ensures the mother's health will be taken care of properly. The Temple of Dawn, after all, is the center of knowledge when it comes to the care for mothers both before and after birth.

Many foreigners are shocked when they first hear of this tradition, especially those hailing from more prudent nations. After all, it means that the private parts of the mother are on display for all to see! Still, for Ouvezians it is a source of pride, not of leering. Unlike other nations, where the royal are as far away from the commoners as possible, this very public display of vulnerability and being an actual human being leads to a strong connection between both male and female subjects to their queen. Hearing Ouvezians talk about their queen often feels like them affectionately talking about an older or younger sister, with men often feeling protective towards her, and women feeling a sisterly love and care for their queen, who went through the same intense experiences as they did.   Of course, the tradition, though usually a cause for celebration, has seen their fair share of tragedy, despite the best efforts of the Temple of Dawn. On some occasions, the queen, her child or both have died. Yet it has always brought the nation together, with everyone sharing the sense of loss as if they lost a loved one. In these moments, even the normally ruthless rumormongers have learned to take a step back - more than one has literally been torn apart by an angry mob for what was perceived to be disrespectful towards the royal family in times of mourning.   All in all, while strange to behold for outsiders, every Ouvezian is proud of this tradition and of their royal family, and the bond they share. 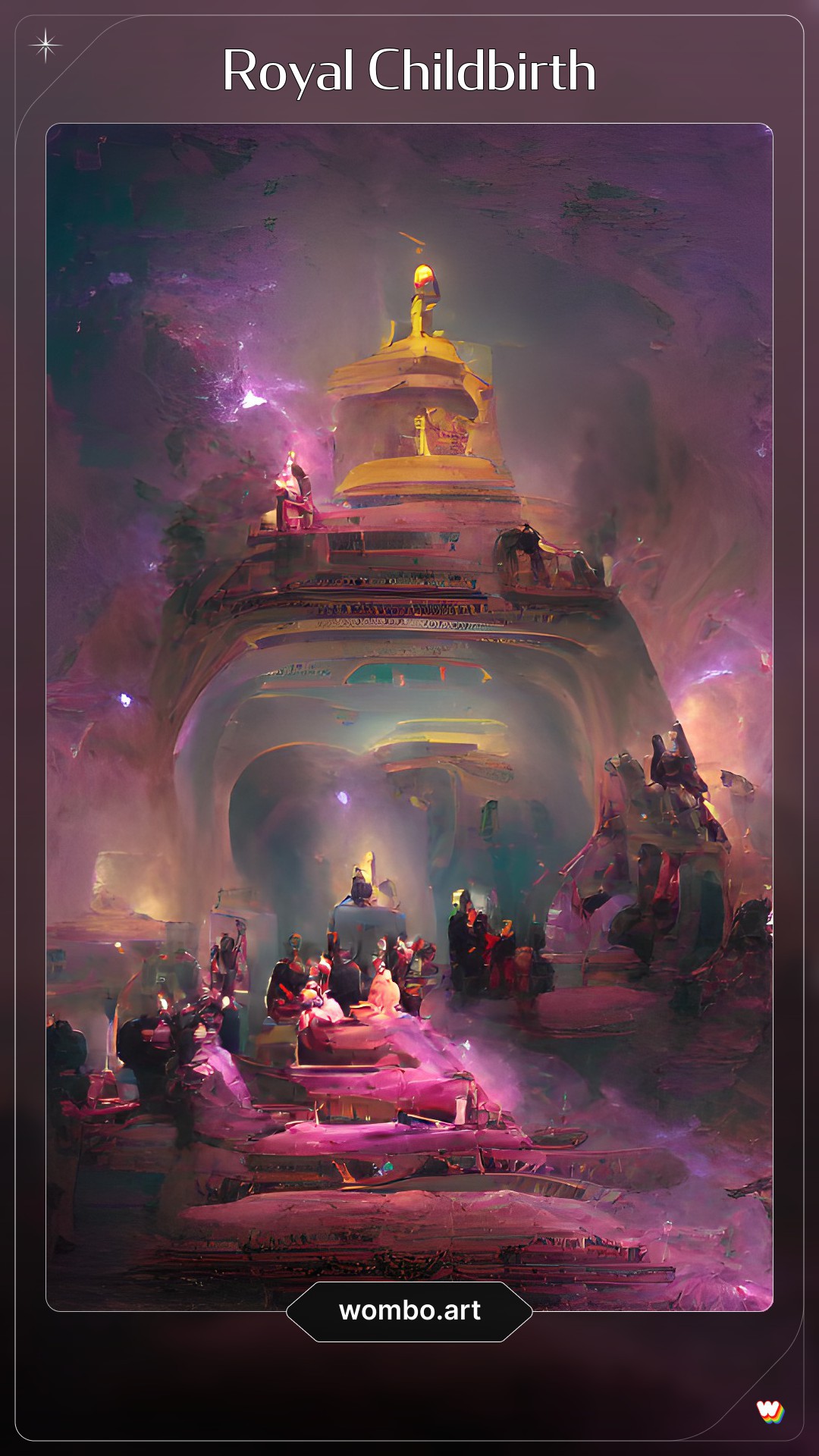 Royal Childbirth at the Temple of Dawn by Imoen Kim via wombo.art

The Light of the World

Births in Ouvezia are traditionally announced by figuratively "lighting up" the house with the new life. White lanterns will illuminate the whole front, and often strangers from the street may stop by a lit-up house and bring gifts. In case of a Royal Childbirth, the gifts will be brought to any temple besides the Temple of Dawn, and the temples will make sure people in need will benefit from the gifts. 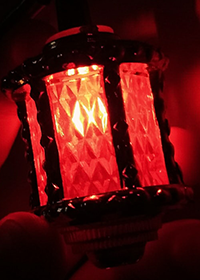 Person holding Red Light by Jonathan Miranda
Similarly, a child (usually under the age of ten) dying will be announced by lighting the house with red lanterns. Even more than the white lights, these attract strangers and friends alike stopping by and commiserating with the parents. In this case, people will often ask what the parents need in this difficult time and come back with gifts soon afterwards.

This was one of my favorite articles from WorldEmber. The picture you painted for me of this society turning out to celebrate a birth—it was fantastic. And the tradition about the lights in the windows—that was a great additional detail.

Oh, hello there :D I'm sorry for my late reply, I jsut started looking at my notifications again. January ate me up with RL!   Thank you so much for your kind words! This society has been kicking around in my head for a while, and I wanted to write about it for ages, but was worried if I could do it justice. I'm glad you liked it that much!   I always like to take one detail (in this case, the reason why inheritance is matrilineal) and try to imagine how this would influence a society. What would change compared to what we know? This was really fun to come up with, and I'm so happy to see people enjoyed it!

Congrats on the best tradition win. It’s well deserved too! Well written and unique take on child birth. How would premature or late births affect the ritual or responses by the populace?

Thank you! I'm glad you enjoyed the tradition! And thanks for these excellent questions!   If the pregnancy is regarded as risky or the mother's health is frail, she will probably spend most, if not all of her pregnancy at the temple, to ensure the best care. And because of the closeness of their queen and the populace, most likely the populace would be aware of this - and the Announcement Square would see action much earlier. It would be difficult for the majority to be present, but at least one person per extended family would likely try to be around for the occasion.   Even after a royal childbirth, the square still sees ongoing celebrations for a few days, so if the birth happens unepxectedly early, most likely the celebration will just start a little late and last longer after birth than usual. Similarly, a late birth more or less means longer festivities.