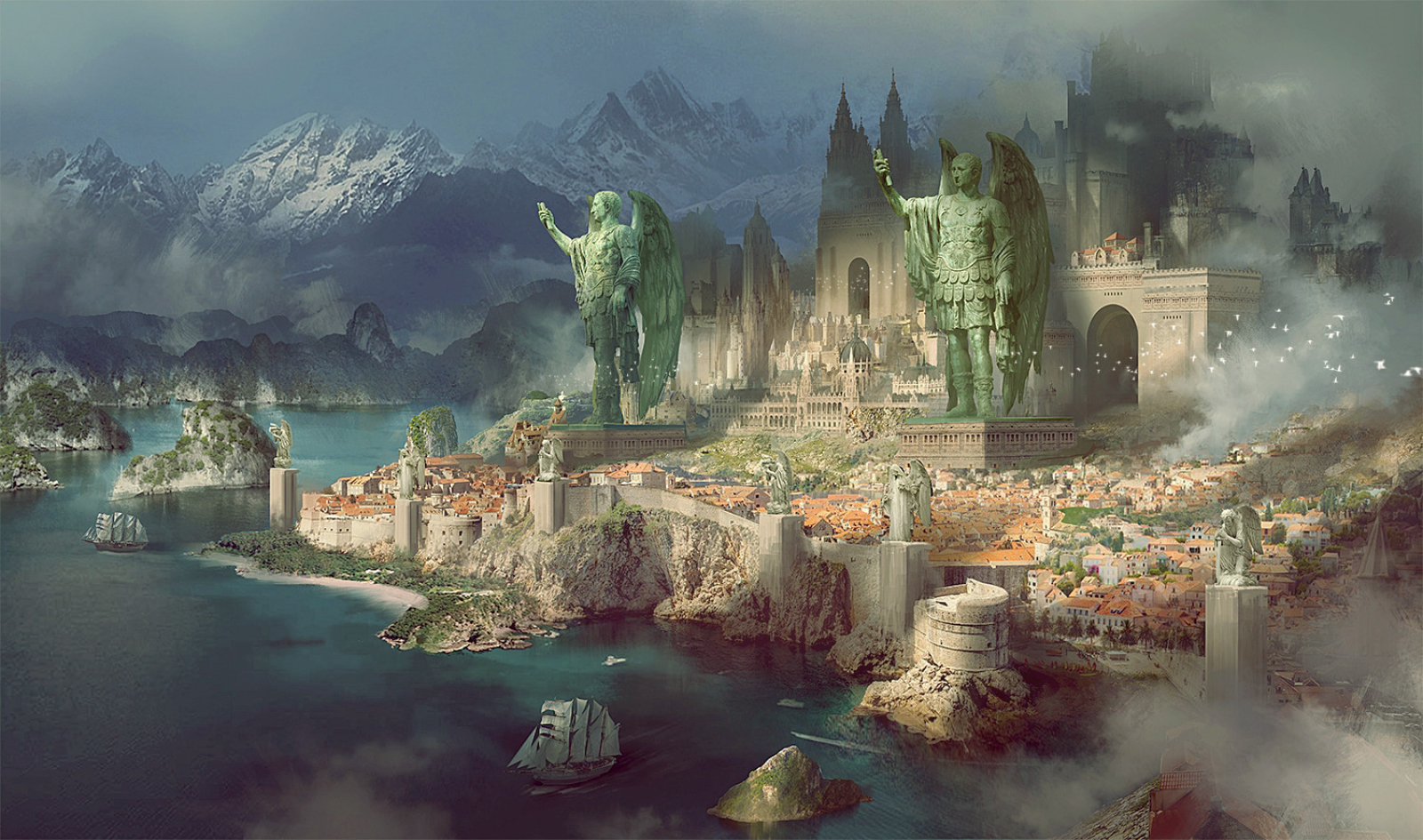 To you oh father of the Gods, eternal light and source of wisdom, to you oh Queen of Nature, mother of all creatures, you that gave us wealth, and to you Thundering Mother, manifestation of divine light and justice, bring protection to your sons and strike terror into the hearts our enemies. To you oh Inmortal Gods we pray for the safety and protection of our city and Empire
— Blatian prayer to the Gods for the protection of the city

From colony to Imperial Capital


In 678 BP the Ikarians conquered the Southern regions of the Kallian Plains from the local Kallian tribes. In order to control the new adquired regions, the Ikarian Emperor Anastasius III ordered the construction of a new city at the mouth of the river Akres that would act as a military colony where thousands of legionary veterans would settle. According to mythology the place was also chosen by divine intervention when a thunderbolt fell at the site of the new city sent by the Goddess of Thunder, the ancestor of the Ikarian Emperor as its people, thus granting "her favour" to the founding of the new city (similar to the mythological founding of Ikaria where a meteor marked the location of the new city).   So, in the fifth month of 678 BP the city was oficially founded and the first settlers began to build their houses. The settlement began to grow quickly not only with the arrival of new waves of Ikarian settlers but also thanks to loyal indigenous Kallian tribes who were willing to settle in the new prosperous city. The city also acted as a center for the spreading of the Ikarian culture and language across the Kallian Plains. In 242 BP the port was expanded, again, helping to increase the prosperity of the city even more through trade. Eventually Blati became the most important port of the Interior Sea, and the Ikarian Empire's second largest and wealthiest city after the capital itself. After Tiberius II (r.122-97 BP) the city was also the summer residence of the Ikarian Emperor due to Blati's more favourite climate during that season. he build a palace at the highest hill . In 188 AP the city became the second most important port of the Imperial Navy, and the new Military port was built.   After the disastrous battle of Alusium in 240 AP during the Ikarian-Seris war, which lead to the death of 24.000 Ikarian soldiers, the city was threatened by the Seris Navy, but due to a ferocious storm and the heroic actions of the navy stationed in Blati the Seris fleet had to withdraw. In 270 AP its famous double city walls where built (whose construction ended in 300 AP)   After the fall of the Ikarian Empire in 460 AP, Prince Euthychius established his capital in Blati where he was recognized as the legitimate Ikarian Emperor by its inhabitants and the new Senate (formed by the Senators who scaped from the siege of the Ikarian capital) . Thus founded the so called The Blatian Empire .   In the following centuries the city reached two million inhabitants, becoming the largest city in Yeia. Surpassing Ikaria during its golden age, and the Seris capital , Sakouramish . The city also wistood two mayor sieges by the barbarians who accupied the north of the country after the fall of Ikaria. The first one in 512 AP and the second and most epic in 651 AP.


Goverment of the city


Being such a huge city, Blati is divided into 10 prefectures, each one governed by a prefect. These prefectures act as little municipalities in which the prefect is in charge of dealing with public order, sanitation, crime and taxation. Each month these prefects have to send a report to the chieff magistrate of the city, the Prefect of the Capital (Similar to the homonymous position that existed in Ikaria, it was created after the establishment of Blati as the new capital after the fall of Ikaria, before that the city was ruled by Two city mayors like every other Ikarian city) . He is in charge of the monthly supply of grain to the population of the capital from the nearby regions and across the sea, the water supply system, the maintenance of sewers, monuments and baths of the city , he is the superintendent of all the city guilds and the police and firefighters. He is also in control of the merchant area of the city's port . He is chosen among the Senators and has to be officially named by the Emperor. Till these days it has remained the only purely civil magistratacy inside the city .   The municipal council of Blati is its famous Senate, formed by 250 senators chosen from the most important families of the Empire. The Senate can enact laws concerning city life, such as regulations for the guilds, the building of new temples and public buildings or regulate market prices.
Defences

Blati is famous for its strong double walls that protect the city from both sides, from the Sea and from Lake Bareotis . They have loopholes in both the towers and the Upper Walls from which they can shoot arrows, fire from flame throwers or shoot with gunpowder weapons at the incomming attackers. Also in the western section of the walls , across the Akres river lies Phoenix fortress (due to the statue of a giant phoenix statue place on top of its gate) that was built in 587 AP, and was the most contested section of the walls during the the Second Great Siege of the city in 651 AP.   The walls have 12 gates, and only those facing west and east have a drawbridge and a moat, as they are the only ones not protected by the lake or the sea.

Blati is the most important center of trade in the continent of Teria (the other important one being Boria on the Delta, in the Kingdom of Stormitia). Merchants from every known realm of Yeia can be found in the city selling their goods in the numerous markets of the city and at the port.   The Imperial capital is famous for producing really fine sculptures and other works of art. Its goldsmiths are renown across the world as the finest you can find. Blati is also called the city of Silk. As it is the biggest center of silk making and also of silk clothes. In Blati, from Imperial Guards, merchants, Bureaucrats, Senators to the Imperial Court dress in the finest robes make of silk and wore the most luxurious jewels, necklaces and rings you can ever imagine. Other item produced in Blati that are renown around the world are books. Blati is known also as the intellectual and cultural center of Yeia, home to its famous Academy (where magic arts, science, alchemy and many other subjects are taught), so books are really important; and there are a lot of bookstores that produce really high quality books that are exported to regions as far as the realms beyond the kingdom of the Sun elves or the Kingdoms of Witarfia and Wesdaland in Western Teria.

The city is home to many famous monuments such as the Temple to All the Gods (which is a replica of the one that once stood proudly in the center of the city of Ikaria before being sack and almost destroyed by the barbarians) and their golden domes. The forum and his many temples, libraries and even a gallery of art with around 250 sculptures and 1000 paintings! are also a very famous turistic site. 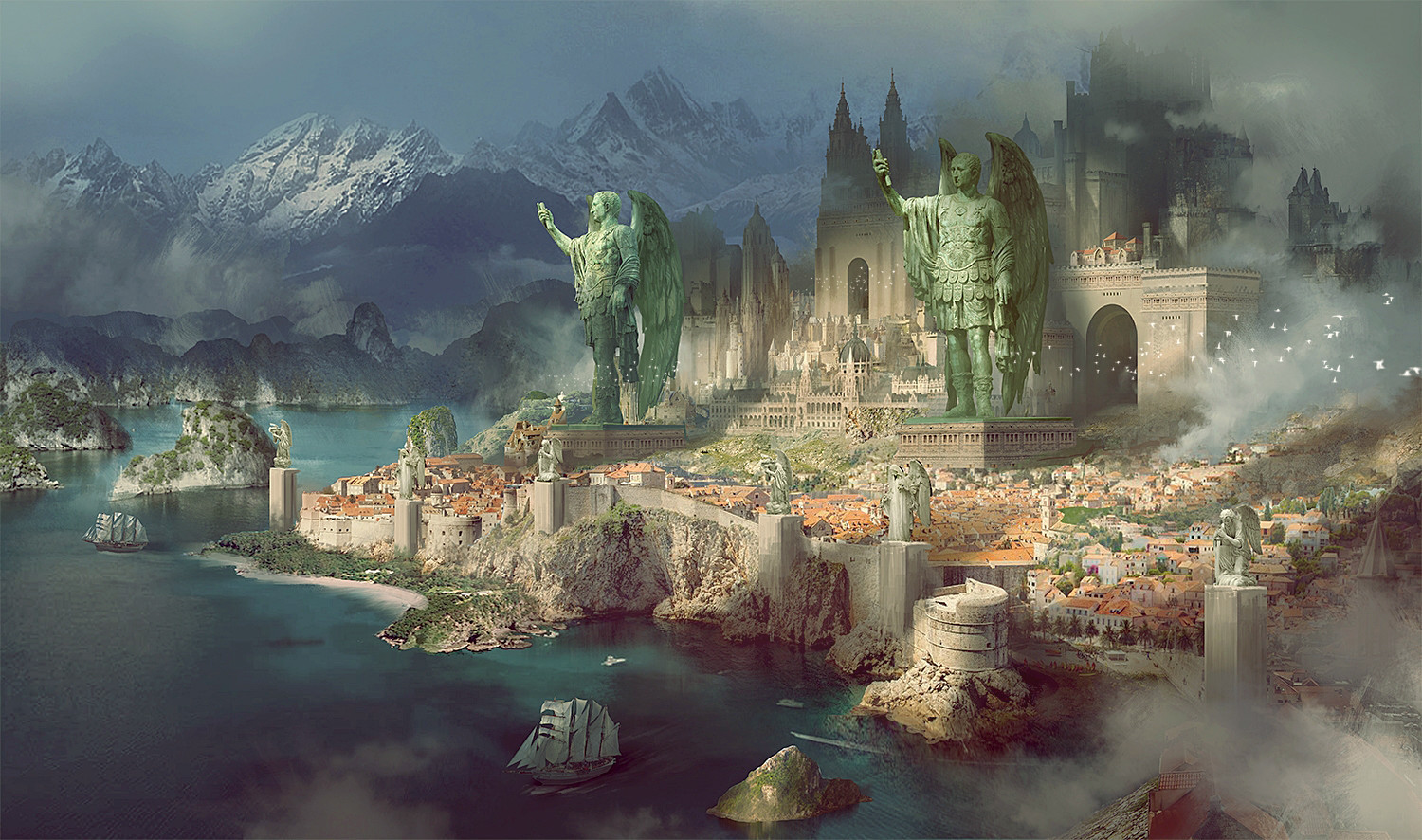 But the most striking vision tourists and foreign dignataries get from the city are the two colossal statues to two deified Emperors (Andronicus IV and Euthycius I) that; as a Seris embassador once said "Guard the entrance to the acropolis of the city, where the Imperial Palace and the holiest of temples are located". They are made of bronze and are 33 meters tall!!.
The Imperial Palace is another of the most famous buildings of Blati. It was built using the brightest white marble available and its roofs and domes are entirely covered in lapis lazuli slabs. The throne room roofs are covered in gold and those of the imperial bedrooms and dining rooms, in silver.

On the top of the Acropolis lies the holiest temple in the Empire, the temple dedicated to the Prophet Blatiqusqui, the reformer of the Blatian Religion and considered by many to be the avatar of the King of the Gods, Abbon Shabai.
Last, but not least, we have to talk about the Academy, the most famous center of learning in Yeia. Home to the brightest minds in the world. Where the highest degrees of alchemy, chemistry and magic can be obtained and where you can find the most brilliant philosophers engaging in many debates and also read books from across the world covering many subjects such as history, maths, alchemy, poetry, geography... .
Founding Date
678 BP
Alternative Name(s)
The Pearl of Yeia/ Empress of the cities
Type
Capital
Population
2.000.000
Inhabitant Demonym
Blatians
Owner/Ruler
David I, Emperor of Blati
Ruling/Owning Rank
Emperor of Blati
Owning Organization
The Blatian Empire
The name Blati means "Blessed" in the Ikarian language, referring to the suposed protection of the city by the Gods. Its patron gods are those of the so called Ikarian Triad (Abbon Shabai, Tyr and the Goddess of Lightning, Zerah).

Thank you very much Qurilion for your comment !!!. I'm glad that you like it!!. I'm also working on another article related to this famous city!!.

Great Article, I really enjoyed the read. Very detailed information and History. A well deserved Like from me.   Aemon