Barr, an isolated island in the middle of Lake Kylych. With it's steep outer cliffs, it is quite difficult to set foot on this island. The few that did have never been seen again.

We were there. Right there at the steep cliff rising above us, towering over us. Neat, clean stone faced us. Small patches of moss way above our heads. The water swapped against the rock. A loud noise in this quite environment. The breaths of my companions, they were loud in the air. The noise of a paddle being moved shouted like catapult being fired. It was so quiet. No insects were pestering us. No living being except for those few in the two canues. But then, Olivar whispered with a dooming voice to get started. He took out his hammer and nails. The strokes bellowed around us while he fought to get nails into the sturdy rocks. Curses as the first nail bent. Louder shouts of disappointment as the second nail bent. A scoff of disbelief. Then he dropped the hammer into the boat. No scratch was to be seen on where he'd been hammering onto. Barr smiled at us. Unmoved by our attempt to conquer it.

Story from the exploring group of Sir Isor Beton, often told at the fires of Kofur and Felel.

It seems as some powerful gigantic beeing once smashed its fist into a small piece of mud. The mud dried. Around it, water filled the planes. From the waterside all you can see are steep cliffs, polished by centuries of being subjected to the forces of wind and water. If you travel around this island, the view does not change. Constantly, you can see a wall, between 60 and 80 ft high, rising above the water. The wind rolling from the planes that strech out till the Dystanzine Berge. On a clear day, the snow covered peaks shine brightly over the distance.   Rumors have it that some brave adventures actually managed to climb up these cliffs but lost nearly have of their crew doing this. The other half, the ones that supposedly reached the cliff's edge have never been seen again. Exploration from the ground was no possibility, therefore many mages and others tried to fly over this island to explore this hidden spot. But everyone who touched the ground was no longer seen afterwards. From up the air, people told of white clouds, some kind of fog, lying unmoving in the bowl formed by the cliffs. In some acient dwarfen documents, this island was also described. The runes could only be interpreted as "Barr", giving this island its name.   Today, people assume that some poisonous fog does kill all life entering this island. After the many lives it has costed, now only seldomly adventurers embark on missions to lift the secret.

On the cliffs, no plants seem to be able to grow, except for the seldom patch of moss that clings to some of the still unpolished spots. No bird songs can be heard, no insects treat the boating crew. It is like a desolated piece of rock in the middle of a great lake. 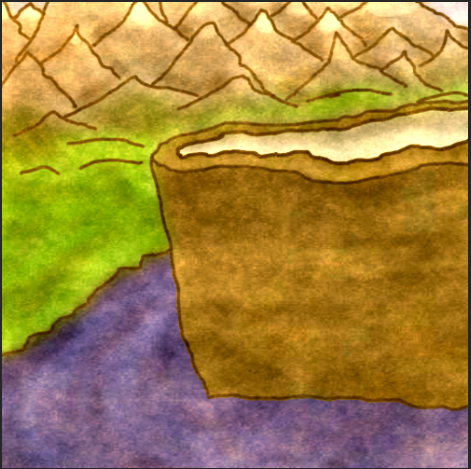