Dagger Falls is a small coastal port town located on the northwestern edge of the Sea of Fallen Stars. Its name comes from its proximity to the Dagger Peaks and the twin waterfalls which empty into the sea near the town's north point. Dagger Falls permanent population is roughly 500 citizens, however, during the warmer season the population has been known to climb to near 700 due to traders and sailors coming into port. The town has a small standing militia of around a dozen permanent members. The lords of Dagger Falls typically hire out to mercenary companies to provide additional protection and law enforcement.

Oligarchy (Lords of the Falls)

Dagger Falls is the home to three major guilds, the lords of which make up the council which oversees town operation. They are responsible for approving new guild memberships, collecting taxes and enforcing the laws within the small port town.

Founded as a small fishing village in 564 BCR, Dagger Falls experienced its first surge in growth towards the end of the Weeping War. Ravosan fleets, having to disembark military, chose to land at this location. It served briefly as a garrison during the War, and officially joined the nation of Ironbank once the Lordimere treaties were signed.

Most buildings in the fishing town are refurbished, showing wear and proximity to the salt waters of the Sea of Fallen Stars. Single and two story structures are the common and with a single three story building with single spire in the center of town serving a housing and meeting hall of the Lords of Dagger Falls. Tudor style with wooden shingle roof homes, adorned with items taken from the sea are common place. 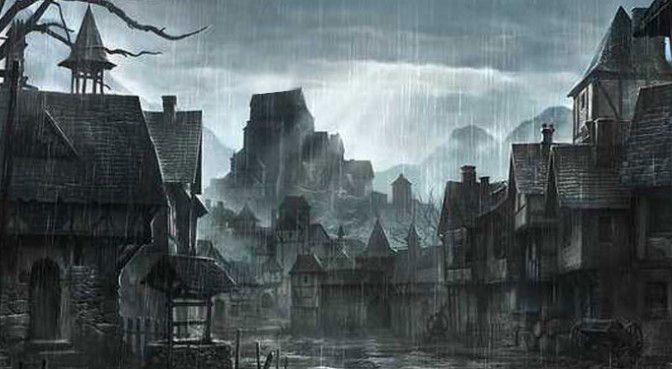