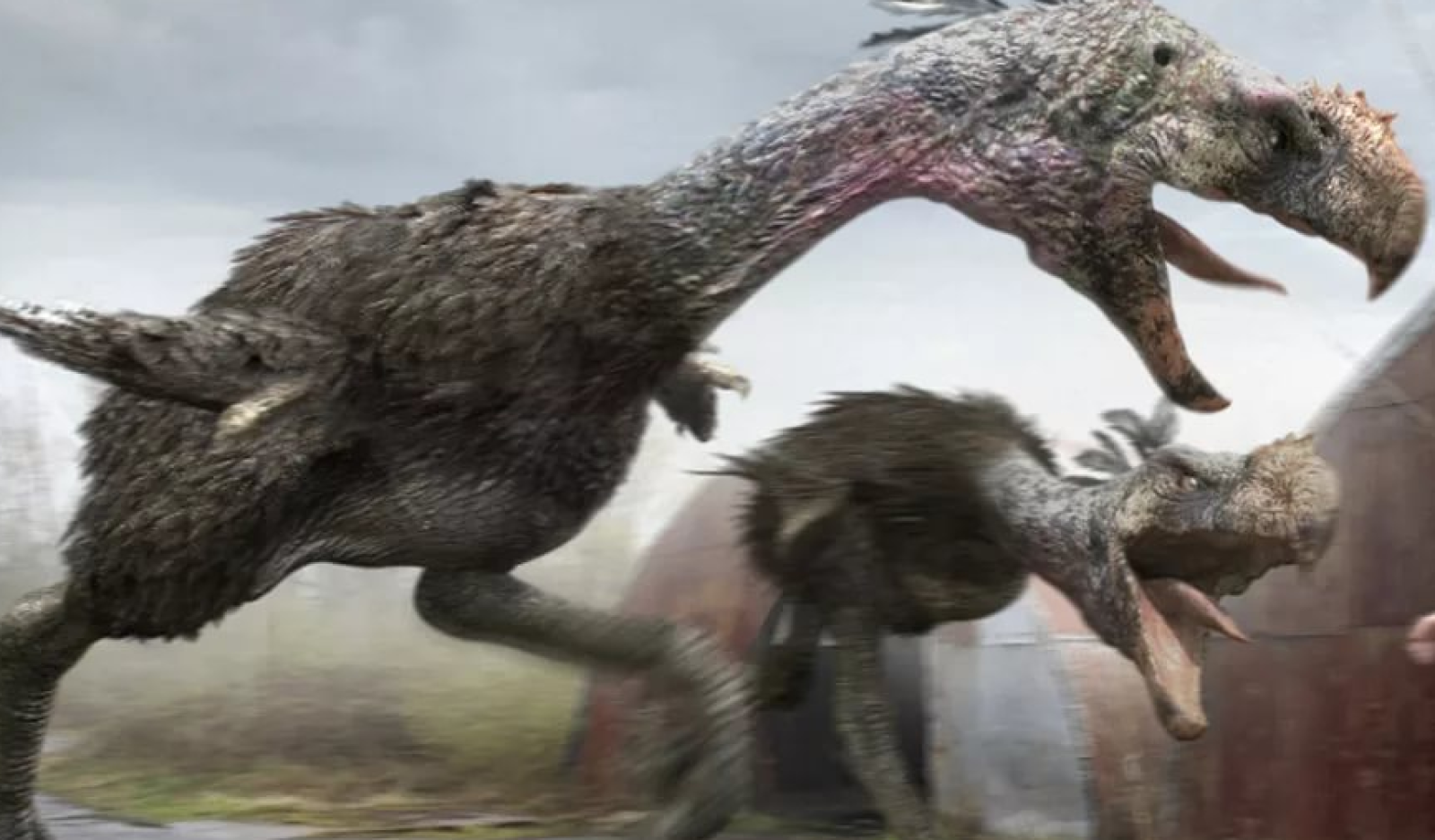 "It was a madness," the defenders thought at first. 500, they counted with the lightest of them at the front. Archers, Slingers and Pelters could have sat and waited comfortably for them to ram into the city's walls, but the garrison commander was convinced that it would have been "a risk to the health of our crafts" and so called the "Jaguars to the front and Eagles to the sides".   It was a tried and tested tact. The warriors with their clubs and snake swords would blunt the advance while those on the flanks would bleed the enemy in flanking attacks with their flint swords. There was no sign of trouble, even at first contact. About a dozen young riders across the Sang formation hit isolated parts; unable to help one another. So, the riders died. The birds, though. The birds kept coming. Even though the twelve were surrounded, the Sang warriors got their first impression of the creatures. Seemingly indifferent to their injuries, the terrors never stopped snapping at their heads or clawing their legs. Swords splintered and scattered when used against them. Maces bounced off. Even darts shot from the wall that found the Terror's eyes had no effect.   Feather amour proved ineffective. The riderless birds had no problem bashing men aside and leaving them writhing on the field. By the time the rest of the flock arrived, none of the early birds had been killed. But they did find themselves littered with bleeding scars, their white and browning feathers shone off and spears sticking out of them in some places. Some had been totally blinded; but these had only made them even more ferocious.   All as one, survivors noticed a dull droning sound before heaving over. People tried to run away, but ended up slipping on their compatriots' vomit, and then their blood. The stupid watchers on the walls, opened the gate for their fleeing brothers-in-arms, but were mockingly out paced by the terrors who then ravished the interior.   So was Crochide... skinned.

Nearly every rider is born and raised on the shores of sauoomsae or Lightning Lake. In such places, high value is placed on self-reliance.   The first time this tactic was used, a force of 500 riders sallied forth towards Crochide in a mad rush. Without any planned coordination the older (and larger) men collected together into a main body with the really young ones trailing them. However, in the spirit of self-dependability, and perhaps arrogance, the young men moved ahead in smaller cohorts of 3 to 4, widely separated form each other to vie for first contact.

Riders might harness their bird with fibers from the vines and grass to help keep them mounted.

Wands are too cumbersome for conventional use on terror-back. Engineers from the College are able to outfit specialized carts pulled by detachments. These carts are so modified as to trigger the wands when they travel a certain distance.

Most riders are proficient with slings, bolas and blow darts. Due to how elevated terror birds are from the ground and how small their riders tend to be; melee weapons are pretty impractical.

An innovative use of the wand, after the skinning, is as the 'fire lance' where one or two are resting atop the birds back facing outward on either side. When the time is right, the rider would open the wand as they ride past the enemy and launch a stream of concentrated fire, hot enough to melt gravel.

There may sometimes be special attachments made to go with the flock at the insistence of the College of Birds. But there is no doubt that the dreaded Terror Birds have carried most importance of all.

Newly christened fighters are traditionally made to take point for the battle-ready flock, and make first contact with the enemy.
— Flock Leader

Typically, a cohort is made up of 4 or 5 individuals (including their mounts). From there. There is no standard to what constitutes a flock. A flock can be made up of 5 cohorts to 20 to 100. And when amassed, a flock knows only one command: "Charge".

A bit like their birds; the riders possess a herd mentality. If a problem arises and they need to turn, the center may only know this when they see the others on their periphery are moving in that direction; and know they should go with them.
— Sang Observer

The Vertigo Vomit, disgusting as it sounds, gets its name from the effect Terror birds have when hunting their natural prey. Though the reasons why are still a mystery, these creatures emit a near silent sound from their enormous beaks that induces confusion and dizziness onto the target. If exposed for long enough, the prey (or enemy combatants) crumple to the ground and begin heaving their last meals; leaving them vulnerable to be torn apart.

When wanting to clear the way quickly, the 'fire lance' technique is used. This involves running headlong into enemy formations and turning at the last second to unleash a beam of fire, courtesy of red salt, to burn short streaks into the men on foot. Though this is not an efficient means of killing, it does terrify whole groups into scattering and then be run down.

Flocks travel light, and are able to largely live off the land. Riders would also store pieces of meat between the saddle and the bird, so that the riding motion would tenderize it until it was consumable.

Strapped wands on carts can be pulled by racing terror birds that fire their spells continuously over the charge as the bird move forward; softening the enemy before impact.

Mainly serving in the defense of the College, newer trainees are normally allowed to contract their serves to other cities or caravans as a part of their training and to gain experience. The earnings from these small expeditions are sent back to the families which are then taxed for the overall upkeep of the flocks.

Recruits mainly hail from people who've lived in the swamp along the river banks. There, they receive an informal training in bird wrangling, rearing and riding from local wranglers. For most, these are often their own family. Given the exclusive family orientation of the profession, boys and girls are taught the skill but only the boys tend to contract abroad to fight.   Though the terror birds are swift and strong, they do tend to exhaust quickly. They are not used to travelling far away from the sauoomsae. Therefore, short riders tend to be the better choice for long distance missions, since they would be lighter, and the bird can run further, harder.

Polite states might refer to the last serious battle of the Cocao War as the 'Dissolution of Crochide'. Proud residents of the College of Birds and the unstoppable riders, however, might call it: the 'Skinning'.

The people by the sauoomsae river are in-fact descendants of those refugees who were forcibly exiled outside the College of Birds during the Shadow Binds to conserve resources. Therefore, when the opportunity to reunite and cast the Sang out presented itself, many were overeager. 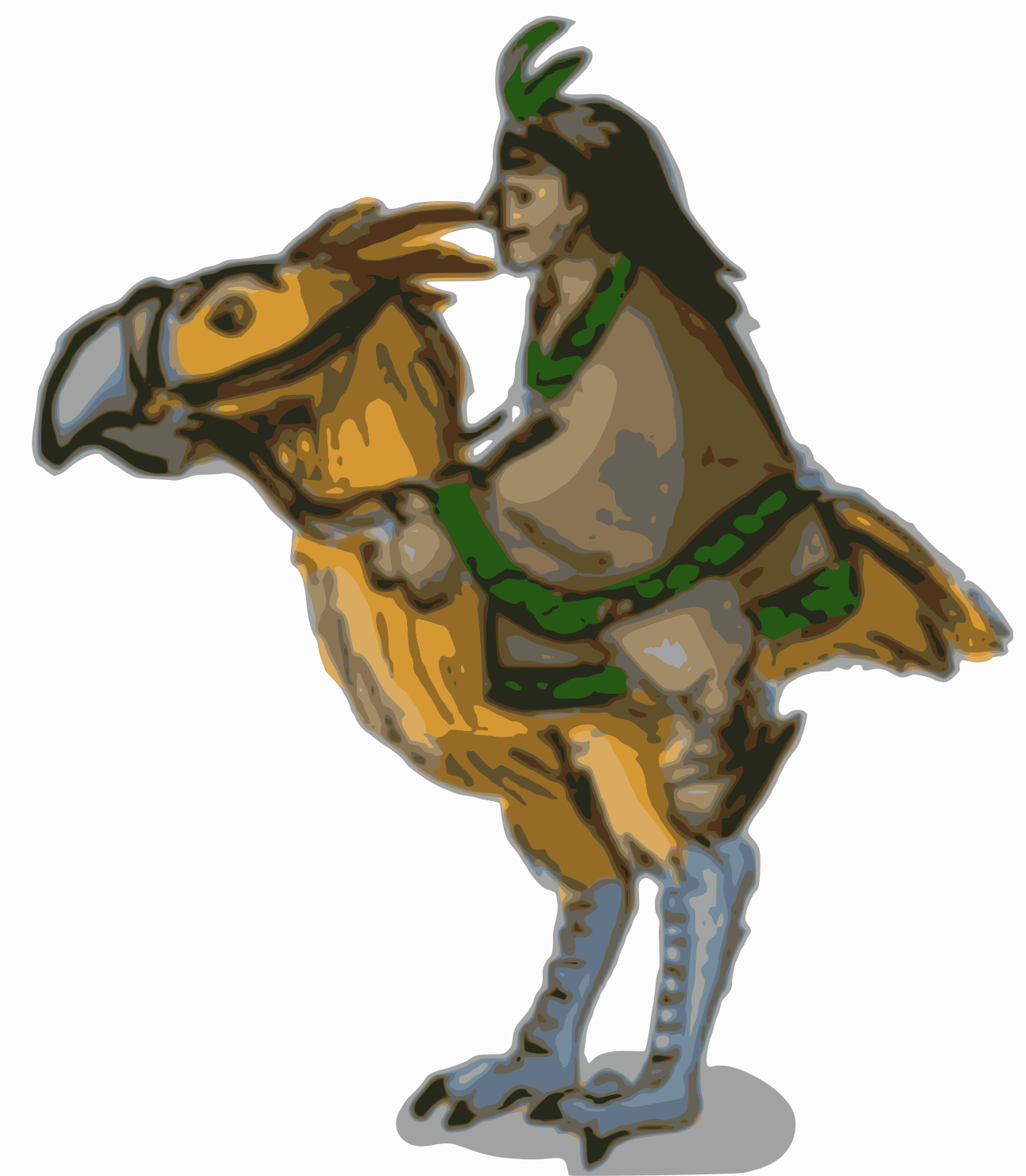