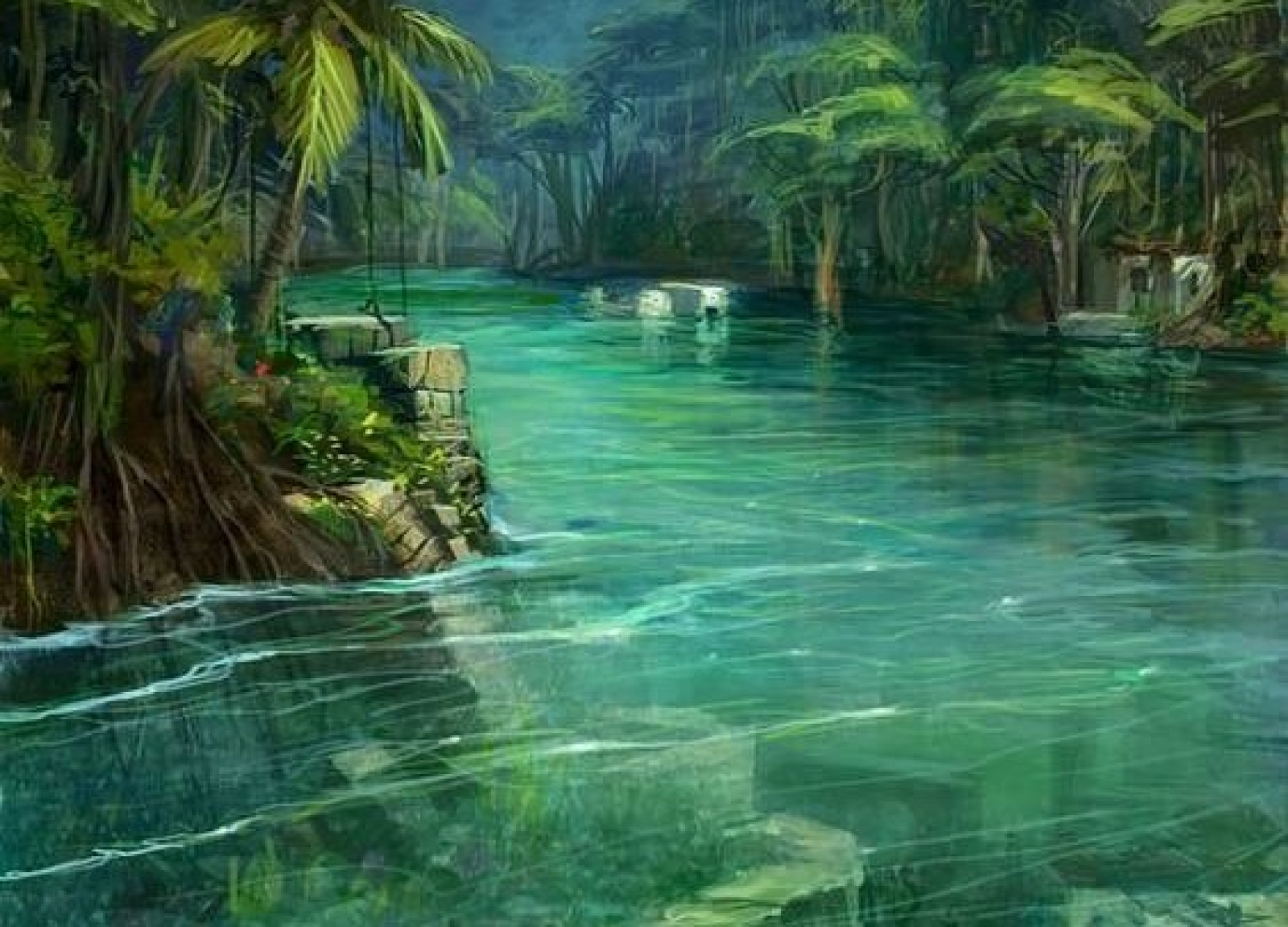 The purpose of this written narrative is to chronicle the events surrounding the two year Sauoomsae Expedition. It was authored by the voyage's apprenticed scribe, the master chronicler having died on the return journey.

The content of the recollections is divided by notable sections travelled on the river as recalled by Carem; with each section further subdivided into testimonials from those who crewed the canoes and explored places he did not.

Before the journey's start, it was proclaimed that the initial findings and samples brought back to the College were to be made available for public discourse and viewing. However, once the actual discovery was made; this notion was discarded because it was feared that the community would discourage future explorations.

The five boats were commissioned and launched after the victorious conclusion of the Cocao War.   The principles which led to the Sun Pillars created fantastic defensive planning and the taming of Terror Birds birthed envious offensive capabilities. As a result, it was seen that expanding the College's knowledge base was necessary in staying ahead of its rivals. So, an endeavour was begun to search for new resources, new trade ties and begin mapping the river banks.

The writing of this document was never really planned. Originally, the scribe would have recorded the mundane life of the captains, crews and attached surveyors for posterity; and occasionally assist the attached Masters and their staff.   But when disaster struck and all the masters' findings and recordings were lost; Carem transcribed as best he could remember the notable happenings once he was safely back in Tlopetla Mountain.

I must first ask that the reader forgive me not being as precise as what would be expected in a professional scribe. As you would soon find out, it was a very trying journey and I had lost all my dated notes and references attempting to make it home and it only occurred to me months after the fact to put to paper want I could recall.

The Rangers have said that there are progressively smaller weather forts the further one travels along the Sauoomsae. A baffling claim to the college but one that had been maintained for centuries by the Rangers. Such claims, had in the past, been disregarded as ferociously unlikely. The College of Birds simply could not fathom how water could remain in its liquid form so far away from the valley, even with the hot-rocks. And the mountainous terrain, so far observable from Tlopetla, would be an unlikely place for a firewell to form.   Throughout much of the expedition, the left river bank held the only sign of habitation to be seen. By this measure future researchers can divide the river into three stretches. Ones I have outlined and named as being significant are the Rangers' Overlook, the Deep Swamp Channel and Crystal Tree

I named this after the many stone sails we passed under the Range. As told, the river starts at the foot of the mountain at Lightning Lake and continues at a lazy pace for days upon days upon days and never out of sight of he Northern Range. Easy rowing.   Our fellow Toiks who lived along the Sauoomsae shore followed us atop their weird mounts for a very long time. I learned only later that they were partially contracted to escort us down a certain way, as to ensure that we would not be ambushed by the wildmen who live in the deeper parts of the swamp.

And yet, the route continued so cold that the trees froze into stalagmite that held a frozen sky above them
words taken straight out from a rower's mouth

I'm not describing a metaphor but the literal circumstance that we found ourselves in. And after about a year on the still warm water we came across a gigantic pyramid that straddled the open water before us. Parts of the river turned to rapids; looping around and under the structure's base.   It was found that these were easy enough to avoid but the boat charged to Captain Motho was pulled heavily beneath the pyramid when he tried to dock with the stone platform at the river center. I confess, I did not notice the hazards ahead being too awestruck by the river pyramid. And I suspect the other four captains were as well. When the rowing crews started shouting warnings across the waters; I'd thought I had heard someone mention finkins attacking and dropped my oar for a spear. Which was stupid as the danger was, in fact, approaching rapids and obstructions. 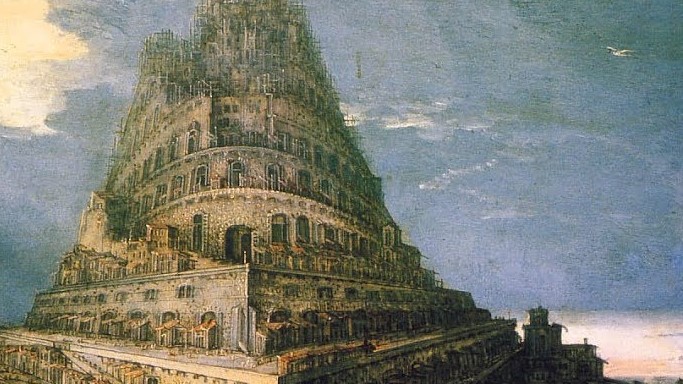 Tower of Babel
The rest of us had managed to evade the jutting rocks and whirlpools and a few daring souls stepped off first to explore the exterior. I cannot remember the number of terraces that circled the multiple levels or for certain the measurements taken by the chief surveyor. I have attached an artist's depiction of the Man-Made Mountain, as the crewmen took to calling it, and would like to fill in some missing features.   All around the perimeter base was guarded by horned heads sunk up to their noses in the river water. And according Master Tolletlta, showed signs of being plated in a metal like copper or brass at some time. I was able to exam them close up but was not able to see what he saw in the underlining stone. And we had plenty of time because we camped on its steps for three days. What I found most disappointing was when one crewman told me that there was no way inside because the entrances were filled in with rubble.   What I found more terrifying were the troops of wildmen who periodically raided our camp on the temple steps. Day and night, they would pelt us with javelins and stones from the shore trees in small numbers. Worrying and agitating but not really harming anyone. And we dare not leave the security and warmth of the hot-rocks.   By the third night, when came a three pronged assault, it was all hands to the spears. It was not particularly well coordinated, (as I was later told by a lieutenant). But some men did die. Before, I had seen the wildmen as some divergent species of little brothers: hiding atop trees and pelting us with whatever they had. But when they burst out of the canopy at great speeds, stone tip spears in hand and howling in the dark, I had thought for all the world some resurgent sang attacking. Mercifully, they were too few and beat a hasty retreat.   But we were few as well, and becoming fewer, so our captains decided to get off the temple platform and continue on.

I maintain that by the end when the remaining captains decided to turnabout that chunks of frozen sky fell upon us like boulders and destroyed whole canoes. My colleagues still cannot place a sensible notion on this. I'm having difficulty myself; and I lived it. An alternative opinion is that the hairy wildmen lobbed stones, sticks and other projectiles that punctured and killed the men; and while that did happen on our return, it was not the cause of our situation.   Thinking back on it now, I realize that it was perhaps more gradual. Ice had finally started creeping onto the surface of the river; and they grew and grew the further we went. Until I awoke one day to ice drifting above and nudging us forward.   The water was totally gone and our stuff was floating in the air as in water. I called this path the crystal tree in my head since we had evidently floated upwards in an increasing steep incline and tumble about like leaves in the wind. Oarsmen, captains and scholars used their oars and hands to scramble to turn around. Canoes flipped over, people floated out of view and crushed by the ice boulders. Only about two canoes' worth of us managed to splashed back in Sauoomsae without the canoes.   We had to stay in the water for leagues with the hot-rocks or else we'd freeze on the shores. By the end only 8 out of the 65 men came back alive.

Entry for Documents of Discovery