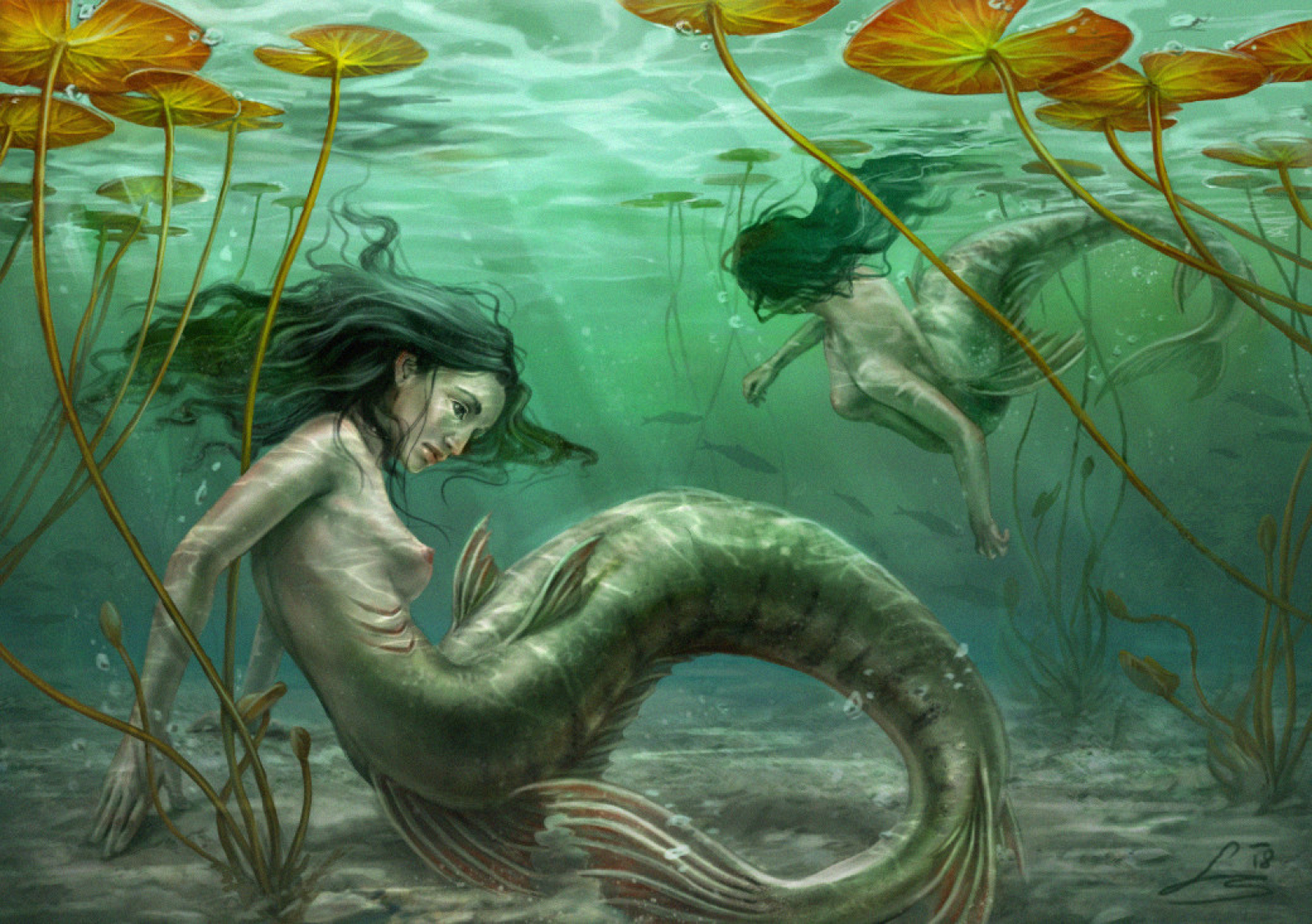 The species are sexually monomorphic. Yes, the top half does bare a strong resemblance to a person with squinted eyes, a sleek boney frame and extended webbing from between the fingers and armpits. However, it is often warned that if you want to see in them, a beautiful maiden, then you will. This is true if it is a dashing man you'd fancy. Both sexes look the same, as would be elaborated further.

For, now, special attention must be diverted to the design of the kin’s tail, which makes up most of the creatures’ length. Often described as the only real muscle on the creature, it is as flexible as a tongue and as elastic as rubber. There are two sectioned parts to the tail where the fins are clustered. Four colourful dorsal fins wrap around the hip area like a skirt or a loin, depending on your preference. On the very end of the tail are three brilliantly long caudal fins possessed of a luminous quality in the water.

Finkin are born with gills as most sea creatures are. However, as they near adulthood, these features that served them so well slowly close and they must rely entirely on their late blooming lungs.

As well, these creatures have two means of traversing the seas. When they need to cruise slowly, they contract the tail muscles on alternative sides, their bottom halves resembling a snake as they swim. For sudden bursts of energy; in a sprint, their tails move a helical fashion.

If you were the female finkin, being a mother is the last thing you'd want to be.
— Blood Trader

Though this quote is undoubtedly true. It also misrepresents that there are distinctly 'female' finkin. Dissections of specimens show that within the hip area, are male and females sex organs. In the front end, encased in a cartilage cage is a vestigial penis. While on the back end, but still parallel to the first organ, are ovaries that connect to a developing womb. It seems bizarre, but it appears that finkin are simultaneously male and female.   Additional dissections show that captive creatures, initially thought to be one or the other, also possess the sex of their opposite, inside and dormant.

It seems to observers that with a mating pair there is a dance, or battle rather, to be the male partner. A successful ‘male’ first must break out their own organ out of its cage and tear a hole into the scaly hide covering it. This is surly a painful process and not many can do it. Those that can, usually do so before they begin to hunt for a mate. And the finkin ‘hunting for mates’ is used deliberately in describing this behavior as many of the techniques they use in hunting for food prove to be useful in hunting their mates.   That is not to say that successful 'male' are forever in the clear. They can, at any time, be caught and impregnated, just as any other; and would have 6 months to live thereafter.

Finkin are born not fully developed. Teeth are the only hard part of this baby kin. About the size of a human finger and creepily transparent, this stage has been called their larvae phase. Though this is inaccurate, likely due to the tadpole-like appearance; they do initially grow rapidly thanks to their mother.   It cannot be ascertained how many children a finkin will birth. But without question, it is a horrifying thing to see. At some point the tiny babies gnawed their way out the walls of the womb, moved through blood vessels to the vital parts of the mother and eat her alive. Even after she’d died, they remain within the corpse for a fortnight until, all at once, the body explodes in a pale mist of wiggling offspring.

It is so violent that some have proposed that in the feeding frenzy happening inside, the siblings must surely be eating each other as well. Though this is impossible to know for sure, no one discounts it.
— Fisher Folk

At this stage, they have been nick named ‘bone worms’ for some have been found stuck between their mother’s splintered bones and left to die.

Once this unpleasantness has past, we lose track of the kin in the waters for a couple of months. Much later, one can find larger pink or green guppy kins gripping onto the plant life in the Remnants. These toddlers, neither bunched together nor alone, are possessed of a bone structure that is both inside and outside the body for their protection. Here, we see the beginnings of the tail. Though it looks stumpy with a square cross-section; the tail has a natural muscular curvature to it that wraps tightly around sea grasses, mangrove roots and coral reefs.

At this stage, the younglings take tentative breathes at the oceans’ surface and excursions into the open oceans; testing their new fins and lungs before totally losing their gills. The kin's distinctive caudal fins at the end of the tail are not yet fully grown and are not very good swimmers. Such that people are able to out dive and out swim them.

Here are the fully mature adults. Capable and spending much of their time in the ocean depths, but regularly breaching to replenish their air supply.

Finkin favours to liver in temperate and tropical waters.

Finkin survive on a strong seafood based diet.

Once male Finkins reach maturity, they form roaming bands across the open sea to hunt, gather females and patrol the shores.

Female Finkins enjoy their solitary existence for as long as they remain uncaught. After which, they form tight relationship with the other captured Finkin.

Finkin are not domesticated, but they can be tamed.
— Animal Trader

Though not very popular, Finkin are a leanly blubbery species. There are many who tout the health benefits, particularly on the consumption of the fats stored in the hump of the tail.

Additionally, Finkin oil can be extracted from those same fats. And while more expensive, burn no more effectively than oil from alternative sources.

One other fascinating characteristic of this kin are the tendril-like horns that grow in clumps on top their heads. Easily mistaken for hair, they are actually hollow folds of skin that end at a harden point. Not hard enough that they'll ever pierce anything, however.   It has been a long time observed that the kins run combs of coral through them often; thought to be grooming. It has been discovered that poisons obtained from certain meals are stored here, and that the finkin are really coating poison on the coral that would serve as the tips of their spears.

Geographic Location | Dec 27, 2020
Younglings are generally confined to the Sinking Remnants. The expansive shallow wades there, are idyllic for Finkin growth.

Geographic Location | May 9, 2021
From the shallow merrows, they'd eventually move towards the rest of the deeper Merrows as part of the Pearl Sea.

The kin's technology does not go further than shaping and reshaping coral into weapons and jewelry.

If there is a gender that might be open to relations outside the species, it'd be the females. I know what you're going to say, and it doesn't matter. No one is paying for a biology lesson.
— Diva to a Remnant Fisherman

Physical / Metaphysical Law | Dec 24, 2020
Origin/Ancestry
Humans from the W.S. Era
Lifespan
Conservation Status
This species has a favorable perception from the land cultures.   It is not believed that Finkin are under any particularly treat, but there are a few who scope the Finkin's wormy babies from the sea and sell to inland organization.
Average Height
4 - 5 feet
Average Weight
200 stones
Average Length
6 -7.5 feet
Average Physique
A thin skin stretches over a series of bony plates across the chest which are arranged in rings throughout their bodies.   This tends to give their chassis a thin, gaunt appearance.
Body Tint, Colouring and Marking
Finkin skin tend to change colour depending on the temperature of their surroundings.   In the cold deep depths, they are more bluish; under the water's surface, they turn a light green (not unlike the Tinged).   If they are moderately exposed to the sun, they become tan. And should they be unfortunate enough to be set to boil, a dark red. 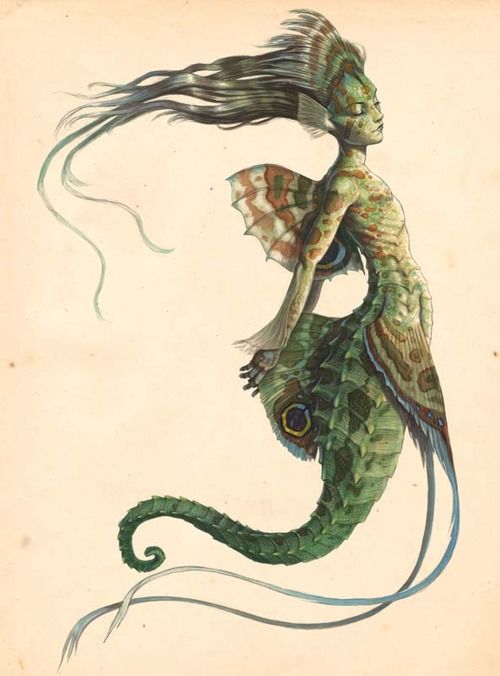