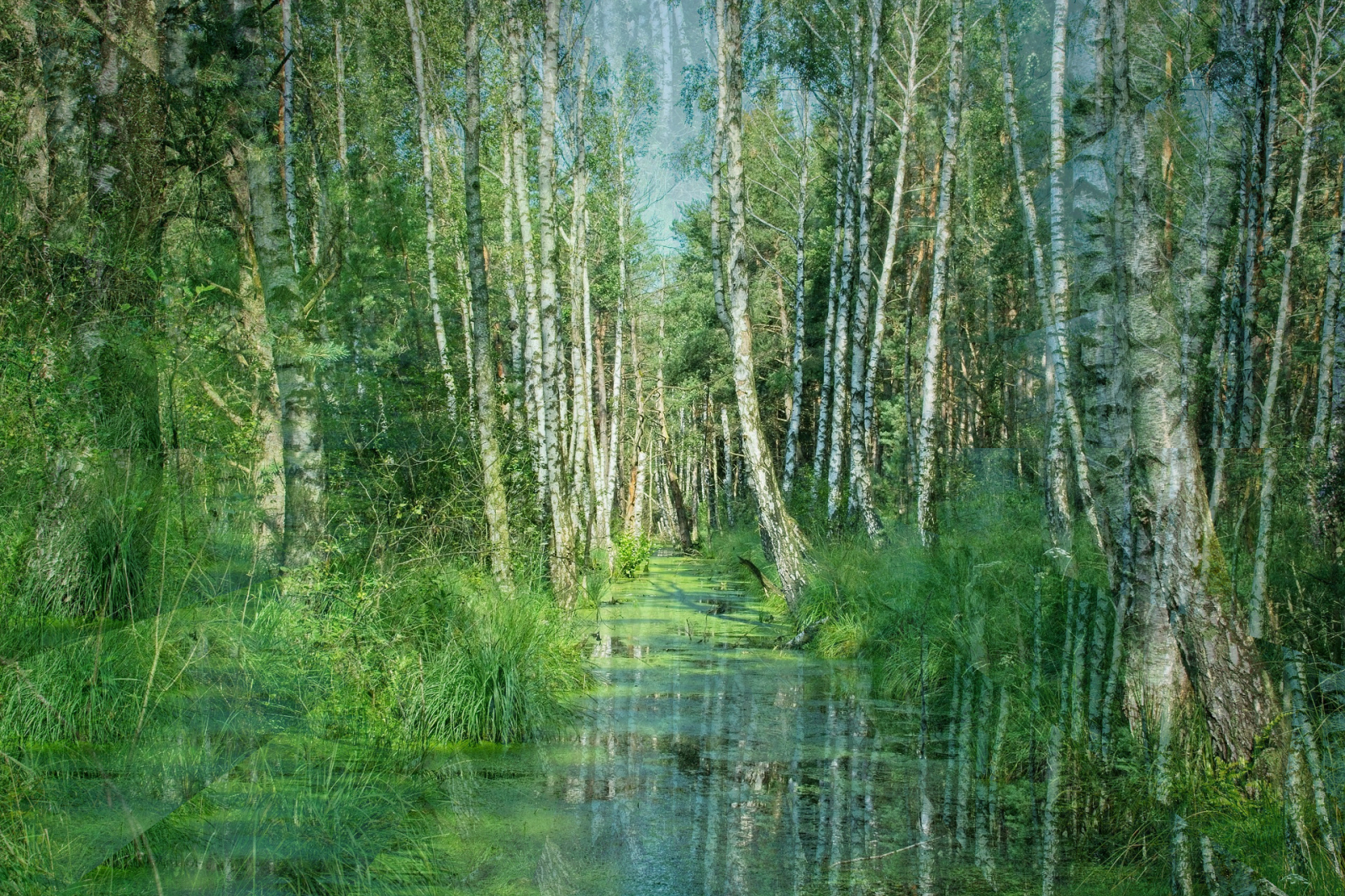 Feywood, also known as spritewood, ghostwood, or fairy birch, is a subspecies of birch that grows in the thaumically active regions of Halqueme, particularly on the Other Side and in western Tregorie. Feywood tar is a major component in construction of the Bereghin sky ships. 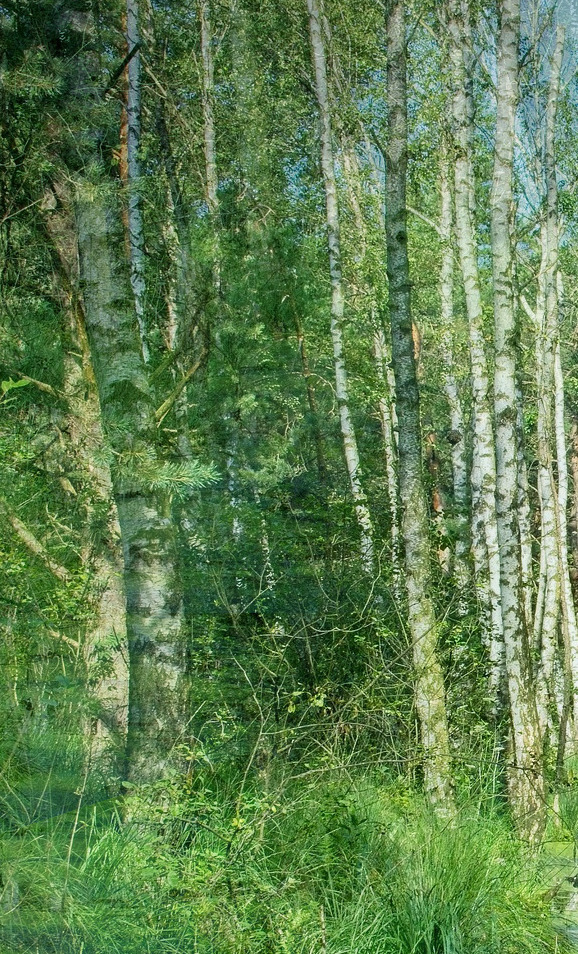 Feywood by Jasne
At first glance, feywood is highly reminiscent of regular birch trees, especially of the silver birch, though it typically grows a bit taller, reaching up to 30 m in height and up to 70 cm in diameter. Its bark is white and papery, with horizontal lenticels characteristic of all birch species. The leaves are triangular, with broad bases, pointed tips and serrated margins.   Unlike regular birch, feywood is rooted firmly in the fifth dimension. To a human eye, feywood trees appear to fade in and out of existence at random intervals. Because of this, feywood groves, while seemingly well-lit and spacious, can prove extremely disorienting. Once cut, feywood dimensions stabilize, but weight and thaumic charge may continue to fluctuate. 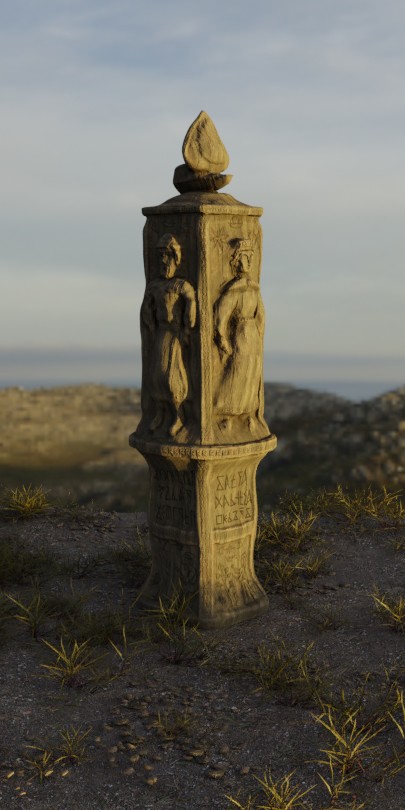 Peresmyak and Yarina Monument by Jasne
Feywood grows only in thaumically active areas. While there are some mentions of trees with similar properties in the ancient times, feywood became much more common after the Great Sundering. It is thought that it has mutated out of regular birch trees after exposure to the magic fallout. On the continent of Halqueme, feywood mostly occurs on the Other Side.

Feywood trees have long been seen as dangerous due to their disorienting quality. Humans have historically avoided them. The extensive feywood forests in the western Tregorie, sometimes called the Bereghin Verge, provide a natural (if somewhat fuzzy) barrier between Bereg and the Other Side.   However, in the early 1600s Asunder, Peresmyak and Yarina, a couple of Tregorie woodworkers, discovered that objects treated with feywood tar become airborne when subjected to a certain type of thaumic impulse. This discovery led to the construction of the first-ever Bereghin sky ship in Year Asunder 1629. 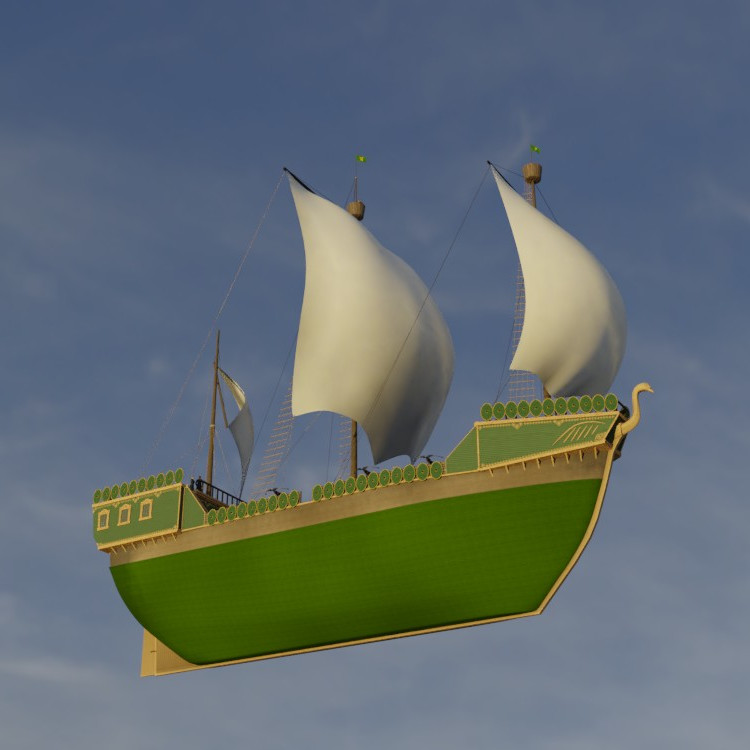 Bereghin Sky Ship by Jasne
Sky ships are one of the fastest modes of transportation on Halqueme, equal only to the wyrms and the unicorns. However, unlike the wyrms and the unicorns, which are living creatures that must rest, sky ships can travel without stopping, and also carry significantly larger loads.   As a result, sky ships—and by extension, feywood—are considered a strategically important resource. The Bereghin crown has the monopoly on feywood harvesting (the current Prince of Tregorie is the gosudar’s cousin and heir). The construction of all sky ships is done by the Crown’s Shipwrights, a heavily regulated corporation. All export of feywood—both raw and feywood products—is strictly prohibited. Feywood smuggling is considered high treason and is one of the rare crimes punishable by death.
Lifespan
300 years
Conservation Status
Rare
Average Height
25-30 m
Halqueme
Open full size
The continent of Haqueme

Very interesting plant with some very useful uses! I can understand why it is so strategically important. The biology of the tree is quite nice as well with their unique leaves and disorienting look. How do the trees reproduce? Is it the same as regular birch trees? Have people also succeeded in growing the trees themselves in groves where they know there is a source of thaumic energy?

Thanks for the comment! Yep, they reproduce the same as regular birch. Strictly speaking, feywood IS birch, just stuck between the dimensions. People haven’t been successful in growing feywood anywhere else, at least, not on Halqueme. It appears that the thaumic conditions are only suitable on the Other Side and along the Bereghin Verge.

Nice article :D This is an interesting tree! I like their political importance for your people :D   " To a human eye, feywood trees appear to fade in and out of existence at random intervals. Because of this, feywood groves, while seemingly well-lit and spacious, can prove extremely disorienting" oooh this is interesting :D people can just walk into a tree without noticing XD   So do your people cultivate the trees/take care of the forest to encourage their growth now? Or are they reliant on the natural growth of the trees?   Are the trees exactly the same as birch apart from their magic and being a bit taller? Or are there more biological differences?

Hey, thanks :) The Bereghins do have foresters and rangers theoretically in charge of taking care of the forest, but... the border with the Other Side, where feywood grows is a seriously messed-up place. For the most part, they’re just there to prevent unauthorized logging and smuggling. And also to make sure no particularly creepy creatures wander in from the Other Side and eat the woodcutters :)   Yep, feywood is pretty much just magically mutated birch, all the differences are thaumic.

Haha, definitely a bad idea to go there during an acid trip! On the other hand, a trip there is kinda acid in itself :D

I love how they can appear to fade in and out of existence. I wonder if there's a way for people to make use of that property. Although I imagine that the woodcutters don't appreciate that trait much!

Thanks for the comment! Yeah, humans definitely wish they could use that vanishing property, but unfortunately it's only present in the living trees, so... still looking for ideas there :)   And yeah, woodcutters aren't huge fans of feywood. Especially since animals seem to have much easier time navigating the place and you never know which temporarily vanished tree is hiding an (equally temporarily) vanished bear. Or worse. But hey, the pay IS very good, so... :)