The City of the Depths

Settlement | Oct 18, 2022
This is one of the reporting logs of Mimi Lakes, a Naiad from the Depths, out to prove that she can become a fully fledged Knowledge Liasion Officer.

This is her second report.
To follow her Mimi's story, head to

Awemonth the 12th, Year 49 of the Century of the Nymphs, 26th Cycle

The Ocean is semi-sentient. To define it's character, however, we have to look at the Queen of the Mermaids, currently Queen Naidene Williams. She is getting on in years for a Mermaid, and thus can be more strict than most other Mermaids. She also has a weird purple eye glow in one eye. I don't know if this is due to the Ocean, or it could be natural... Maybe she has too much magic. But then it would be blue wouldn't it? Also, she has a lot of kids, but none of them have any purple eyes.
There is talk that purple is the second colour of Mermaids. Well, one person has spoken of it. And there are a number of purple fish that live in the purple coral at that place I got scolded for that thing I definately didn't do (by myself). The Queen has also scolded me. I hope her daughter doesn't do the same. I just like to play. 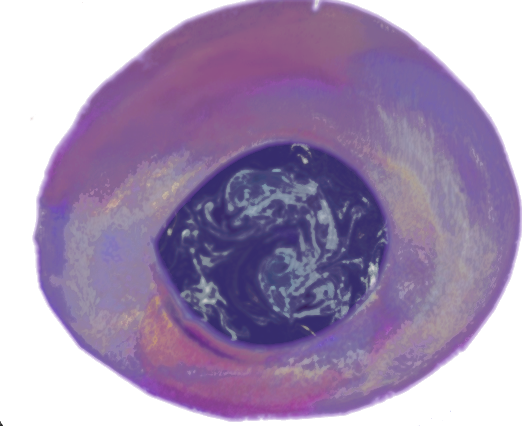 UlrikeLeone via Pixabay; Altered by TaraFaeBelle
The Ocean has always been The Ocean. There has not been another name necessary for it. Kind of strange that there hasn't been another other name when its been around since the beginning of Turien, and most other places that I know of have at least a number of nicknames. Could it have something to do with the fact that Mermaids used to have some form of mind and memory control magics?

The currents run deep. I haven't even touched the foundation magic disk yet. I have seen it from afar though. Though it was really, really, far. And I was way too hungry to keep on going. I wasn't even sure it was the bottom either as I had been through so many potential bottom layers of puzzle-like maze rock. But the colours I saw! There was the six colours of the major races (orange, brown, pink, blue, red and yellow), all swirling around and spreading out into the rock. There was also some bits of purple, black, white and green. Another reason why the Queen's eye could be a secondary colour of Mermaid magic.

Oh yeah, there were the shadows. Shadows of monsters. That's why I ran. And then I ate so much food when I got to a place I could eat at. Oh, the food tastes so much better the further into the Ocean you go.

It also gets colder. The floorbed where most Mermaids live is still a pretty nice and breezy temperature, but if you cheat your way past the Pushback cliffs (or under the floorbed elsewhere) it gets colder each floorbed you travel down. And the currents get more consistent.

On the first floorbed, the currents go different ways at different parts around Turien. The last floorbed I went to, the currents pretty much took you to the pretty colours surrounded by shadow monsters. They all seemed to be swirling from the outside to the inside.

The first floorbed has a very large assortment of coral. There's really big, flaky coral. And tiny, glowing coral. There are many colours and different densities and a variety of shapes. I like the one that tastes like my Dad's homemade lollipops.

Coral is used to make many of the Mermaids buildings. The most amazing coral made building is Coral Palace in Mermaid Cove. They employ the best singers to train Magi-clams to maintain and expand the palace throughout the year. It really does look wonderful.

The Ocean is old and cranky, but super pretty.

If I do enough of these, I can get promoted, right?

Mimi, no.
You are not meant to be asking questions in these reports, simply observing what you see.
There is too much conjecture.
You do not need to bring up Forbidden magics.
A lower floorbed? Are you sure you were observing the Ocean, and not just dreaming?
We do not need to know how you were feeling during your observational report - your hunger is irrelevant.
Coral is not meant to be eaten. Please describe the sizes and colours with more scientific accuracy than just 'pretty'.
I applaud your use of subheadings, though I question why you chose the ones you did. I hope the reason is more substantial than the fact that they all start with 'c'. Regardless, consistency of observation and thought would be greatly appreciated. We can tell when your words get lazier as we read through the page. Adding subheadings does not prevent this.
Do not ask questions of your supervisor on your report. If you need to, attach a separate note, or ask them directly. In response to your question however, yes, one of the requirements for being promoted is when you have completed at least 30 academic observational reports. One of the requirements.
This cannot be used as an academic resource.
Council Notes
That someone could get past the first floorbed is worrying. Moreso that they could get so far down without the Ocean shutting them out. Keep an eye on this one.
As this report mentions magics not offically accepted, it cannot be publicised. However, the observations themselves ... some of them, at least ... might prove useful. File this in the Hidden Archives.

The image of Mimi's face was created using Artbreeder.
Please Login in order to comment!