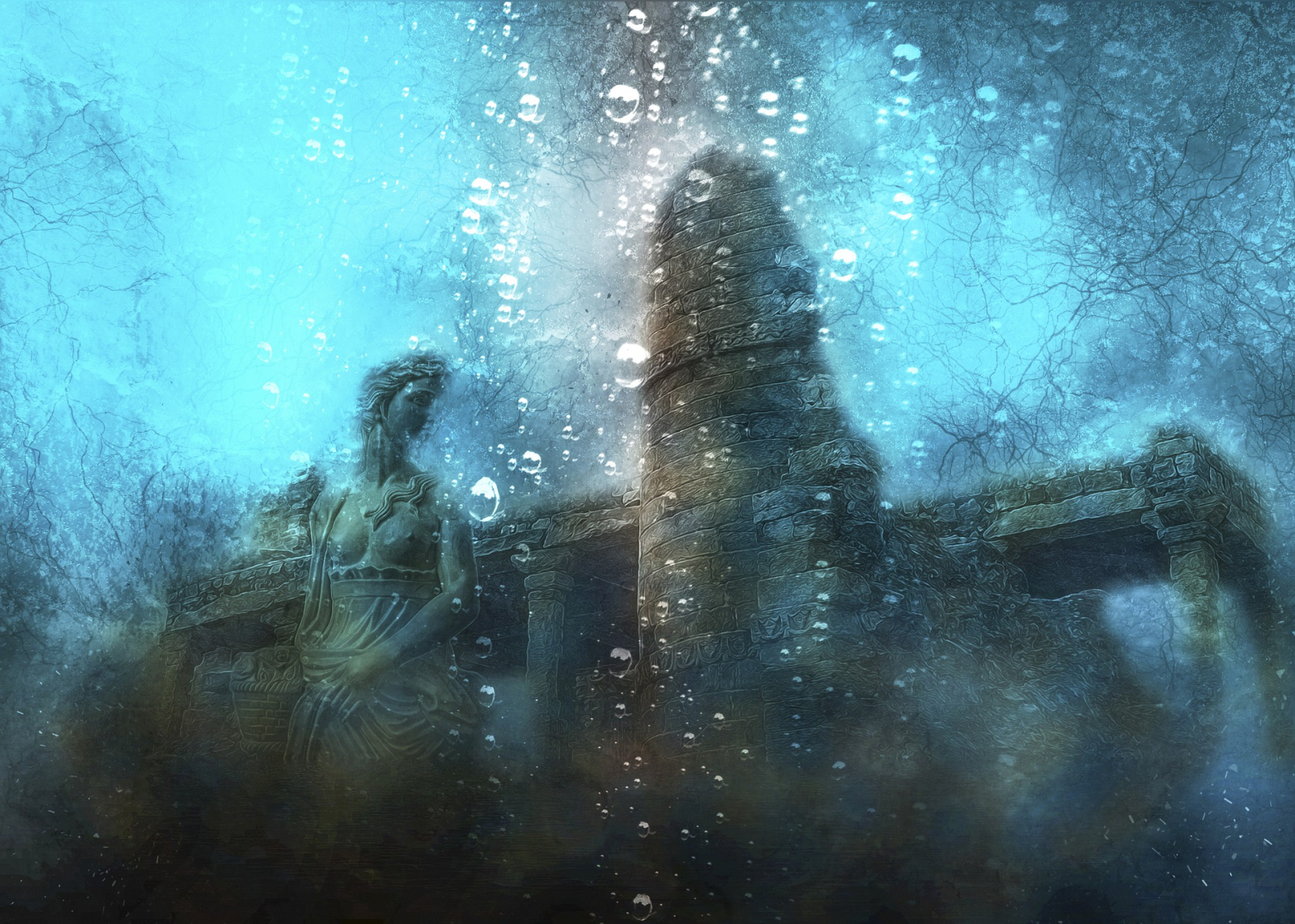 The City of the Depths

This is the beginning of the reporting logs of Mimi Lakes, a Naiad from the Depths, out to prove that she can become a fully fledged Knowledge Liasion Officer.
This is her first report.
To follow her Mimi's story, head to

Willmonth the 32nd, Year 48 of the Century of the Nymphs, 26th Cycle

Dear Lecturer,
I bring you the case of the missing Depths - the city that sits hidden from all.
During the Third Magic World War, Naiads split between those from 'the Shallows' and those from 'the Depths'. Those from the Sahllows agreed to partake in the Third Magic World War, whilr those from the Depths opposed the war, and every war afterwards.
As the Naiads grew in separation, those from the Depths dug the river deeper and deeper, and created a set of caverns jutting out from the river. Through the water magic of the boundary Naiads class 1, these caverns are kept outside of the river's current.
The boundary Naiads class 2 are the ones who get to play pranks on those from the Shallows and other land folk. They use magic moss, water magic bugs and other plants to reflect light around in order to mess with other's depth perception. Magic is also at play, making the river appear as if it were only a few metres Shallow.
In order to keep even from the Naiads of the Shallows, the boundary Naiads were created in order to hide the civilisation of the Depths from everyone else, even those in the Shallows. Just in case any of the stories of the Naiads of the Depths creating houses and things were remembered by the Naiads of the Shallows, the city was moved into the caverns, outside of the current, so that the small city becomes lost to the rest of Turien.
To add to this, the small settlement left over has been specifically eroded by the river's flow, so that it can be heard to be whispered among the Shallows that the Depths 'city' has been 'lost to the current'.
But actually, the City of the Depths, Jargamon has grown. Instead of fighting over which race is best, Naiads of the Depths have isolated themselves from the rest of the world, only sending out a few Naiads per century or few in order to search for technology and magic improvement. Though, that is hard with Forbiddings from the Council and magic seems to have eroded in random areas, for the most part.
I hope to be one of these Naiads to go out and see the world, and bring back knowledge to our wondrous city Jargamon.
The city of Jargamon is a city made of water. Due to Naiad's magic that can shape water, and various technology that can create forcefields and static or something something, all of the walls, roofs, and other such building parts are made from primarily water. The water that is used for the city is directed from the River Tam, as if a small stream here and there was creeping into the riverbed and then being absorbed by the soil. Instead the water makes its way to an area where boundary Naiads in training are given the job of separating the water from the main river and setting into a reservoir. From the reservoir it can be used as a building material.
Every Naiad is taught to build with the water from when they learn to swim, which doesn't take long after drifting. The first thing to build is your bed. Every Naiad is born in the River, and so there is a small settlement known as the Depths by the Naiads of the Shallows (the few who make it past the boundary) - just another way to hide our city. So, this bed is the one used in Jargamon. As one ages, they are expected to build their own rooms from their house, and then their own house (though really, a house is just your parent's room).
Another way we hide our city is through the usage of the same name. There are, like, twenty other Mimi's I know. And probably another bunch of us are swimming around Jargamon. This is because every Naiad is born in the River's flow, but a we do not want those of the Shallows to realise how many of us there are, many of us stay within Jargamon. The Associates (that work with the boundary Naiads) have a constantly updating list of names of all of the Naiads of the Depths. If I want to play in the River Tam's current, I have to let them know my name is Mimi. Then they will check their list and let me know if I am allowed to play in the current, or if there are too many Mimi's already out there and I have to wait until at least one of them comes back and I can switch.
Our names are less of own identity then, and are more of a grouping, particularly as each of us Mimi's are all the same edible river flower. Each name has a set flora it relates to, so as to help us confuse the Naiads of the Shallows. This means that we often refer to each other by relation. After all, it is more fun that way! Others of the Depths may refer to me as Mimi of the second central tower (even though three of us live there) or the Mimi, the potential Knowledge Liaison Officer (I prefer this one), so instead of relationships relation, it is work or location or achievement (or other something) relation.
Anyways, I hope this is enough to convince you that I can travel the world as a Knowledge Liaison Officer and do the Depths proud. Keeping us secret. But proud of me when I bring secrets back here. 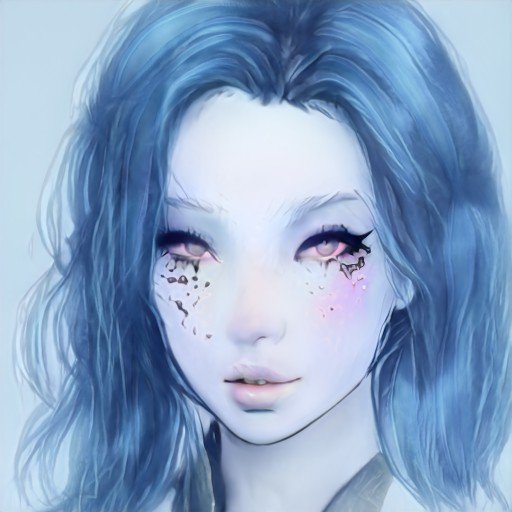 by Artbreeder
Thank you Mimi. I think you have done a decent job, however, there are many areas for you to improve upon. For starters, the name of our wondrous city Jargamon should be the first thing mentioned - not have it only show up partway through your letter. The technology associated with our magnificent water buildings is something something? Mimi, showing your lack of knowledge (particularly when it is something you have specifically been taught, and by me no less) bodes ill for you. We will have a revision session soon. However, it is not a complete loss, as I can worry less that you will spill our secrets to the outside world. I would worry that that means you may miss important technological missions in the future, the whole reason we have this system you are applying for. Your letter jumps around a bit. I can tell you wrote as you thought, and didn't do much rewriting, though you have edited (I do remember your last letter and am glad for your improvement). Perhaps, adding subheadings will help you to organise and record your thoughts and observations. Try and refrain from using the word 'something', it does not show your intelligence. Now remember, it is not just secrets we are after, but the entirety of the knowledge of the world.

The entire knowledge of the world is a bit much, isn't it? I mean, we already know a lot, don't we? Also, does that mean I got accepted?

by Artbreeder
Yes, we do know a lot, but we always want to better ourselves and thus stay ahead of the rest of the world. Also yes, you have been accepted into the program.

Answering: "A settlement that was lost or discovered."
Visit TaraFaeBelle's Competition Page Check all other answers to this prompt Competition Homepage

The imagesof Mimi and the Lecturer's faces were created using Artbreeder.
Please Login in order to comment!