Ghosts are not an incredibly common occurance in Totania. Most souls, when they die, end up in one realm or another. Heaven, Hell, and the Void are the regular places, with some other places believed to exist as well.   Ghosts, however, can stay on Totania. There are ways this can happen, though it is rare.

The first record of a ghost comes from a rogue Head Priestess of the God Vecna in the year -695, a Changeling who went by the name Varx. The story set the precedent for common tales told to others, known as Ghost Stories.

Varx did not want Soul Magic, but had it forced on her. After some time, Varx adapted to it, but grew to dislike Vecna. Varx did not like secrets, and she understood that she could do so much good with the Book of Souls. It was so powerful, it had to be useful. 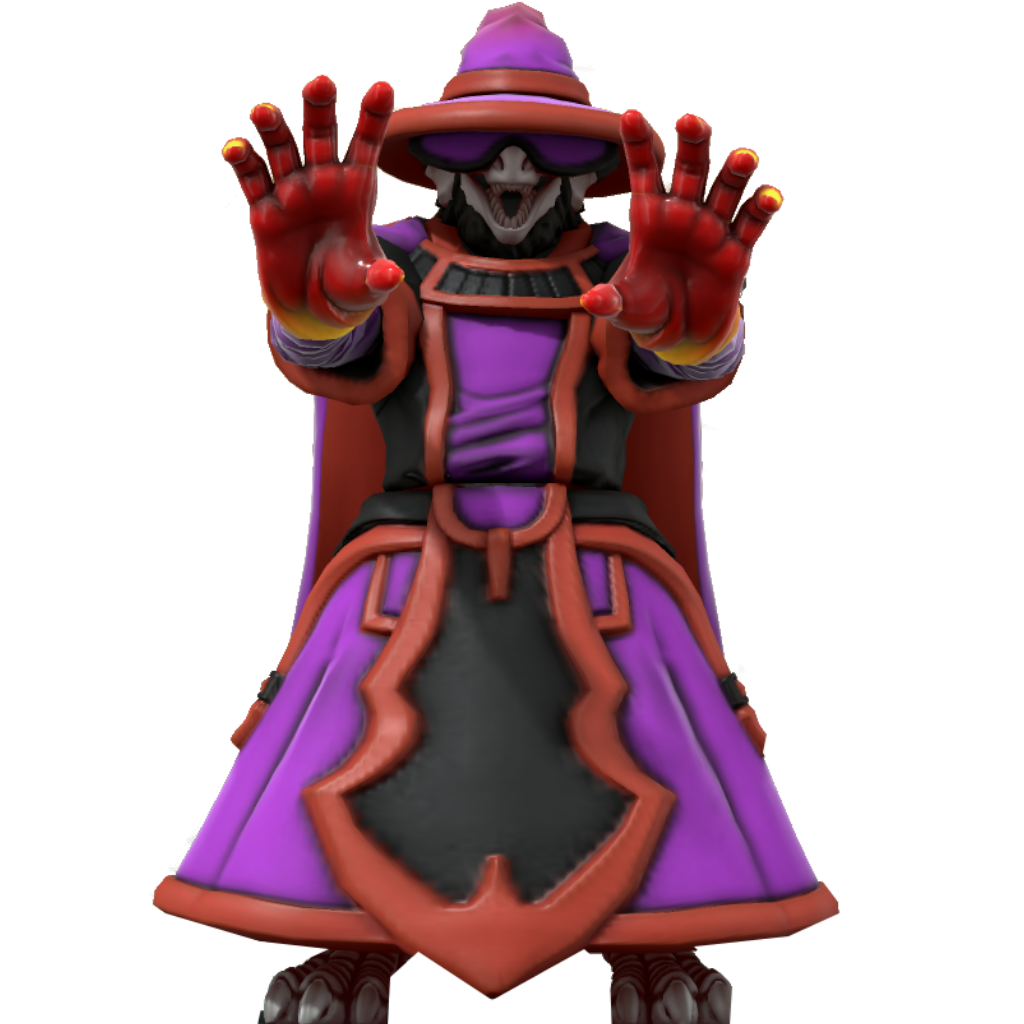 Tobor Tuldad by Jarhed
Varx brought the book to the Dragonborn in Elone, where the Grand Wizard at the time, Tobor Tuldad, was intrigued by the idea. Tuldad was terrified of what would happen to him when he died, and asked if Varx could make a way for him to stay on Totania. Varx was unsure, and decided to test it out.   Varx had, as a Changeling and a Head Priestesss and an Item Mage, made quite a name for herself. So much so that she had gained a close friend in the city. A famous Wood Elven singer named Faphyra Miasir. The two lived together, and were believed to have had romantic feelings for each other. Some historical accounts omit this relationship, to which the historians that keep it in call the historians that leave it out "cowards." 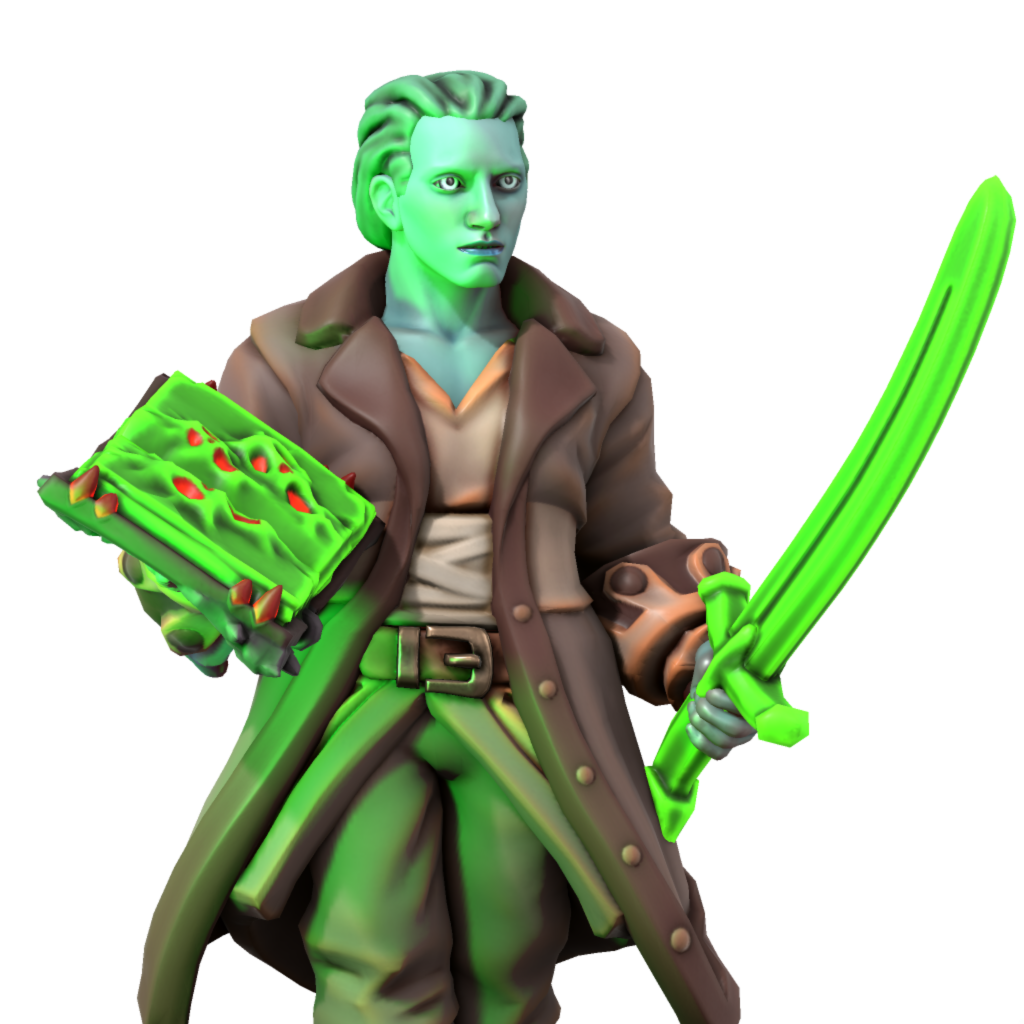 Soul Magic is a type of Item Magic which, as the name implies, controls souls.   It all comes from Vecna's Book of Souls, a tattered book with faces stitched into it. Within the pages of this book, souls can be stored and utilized by the current wielder of Soul Magic. The way in which it is used varies from person to person, but it is not a complex enough magic to fundamentally change like others between users.

Remove these ads. Join the Worldbuilders Guild
Varx did not know who she could test it on. She wasn't sure whether it would be safe to do a spell like that on the Grand Wizard, and so she filed for them to find someone who was willing to be turned into a ghost. Varx specifically requested that it should be someone worth preserving in history. 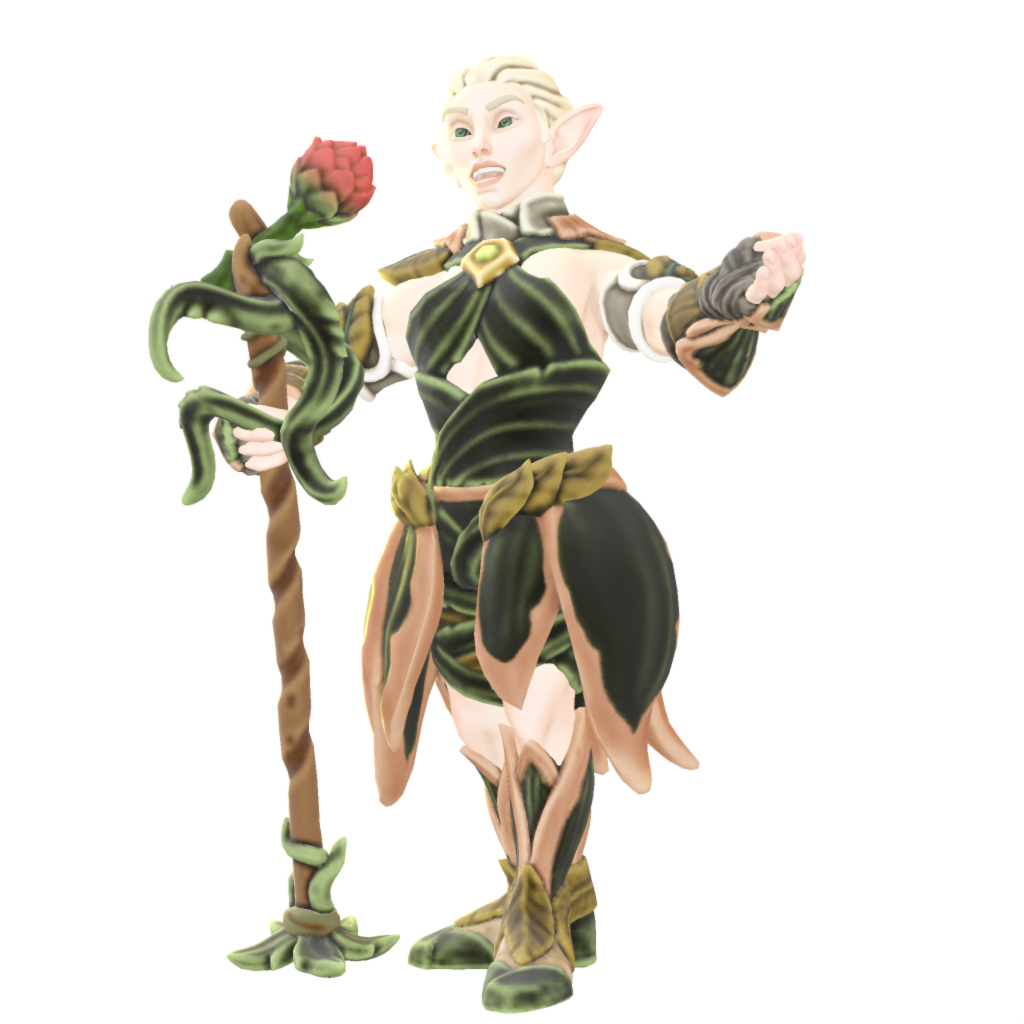 To Varx's surprise, the chosen candidate was none other than Faphyra. As a famous musician, she was perfect to preserve, and she wanted to help Varx however she could. So Varx used a spell on Faphyra, killing her and taking her soul from her body.   However, Faphyra was not allowed within the Book of Souls. This spell bound the spirit not to the book, but to the land. Thus, this created the first Ghost. Varx was killed not long after this, long before she was able to help Tobor achieve his goal. Thus, Tobor Tuldad would follow suit, dying and allowing his successor Iorkul Kricel to take his place.   With Varx's death and the Book of Souls taken, one would think that would be the end of the tale. But Faphyra Miasir is said to still haunt Zephys, singing of her lost love.

The City of Ghosts

The Book of Souls was stolen each time its user died, until eventually it ended up in the hands of an Orc known as Zak the Miscreant. Zak was known for being especially gruesome and cruel to his foes, which to Orcs was just seen as the behavior of a trouble maker, rather than a horrible murderous criminal.   Zak fashioned his weapons out of bones. He was known to carry two daggers, one made of various bones cobbled together, with a miniature skull carved into the hilt. The other was made of the Spine of a Lizardman, which he considered sharp enough to use. Overall, Zak was a fairly horrible person.   Zak had killed many a Beastman in his time. As a matter of fact, he didn't enjoy it anymore. They screamed when they ran away, but no one fought him anymore. So he issued a challenge. He had his clans, as well as some clans they had subjugated, build a giant city, which he called Boldon. Then, Zak sent out an invitation. 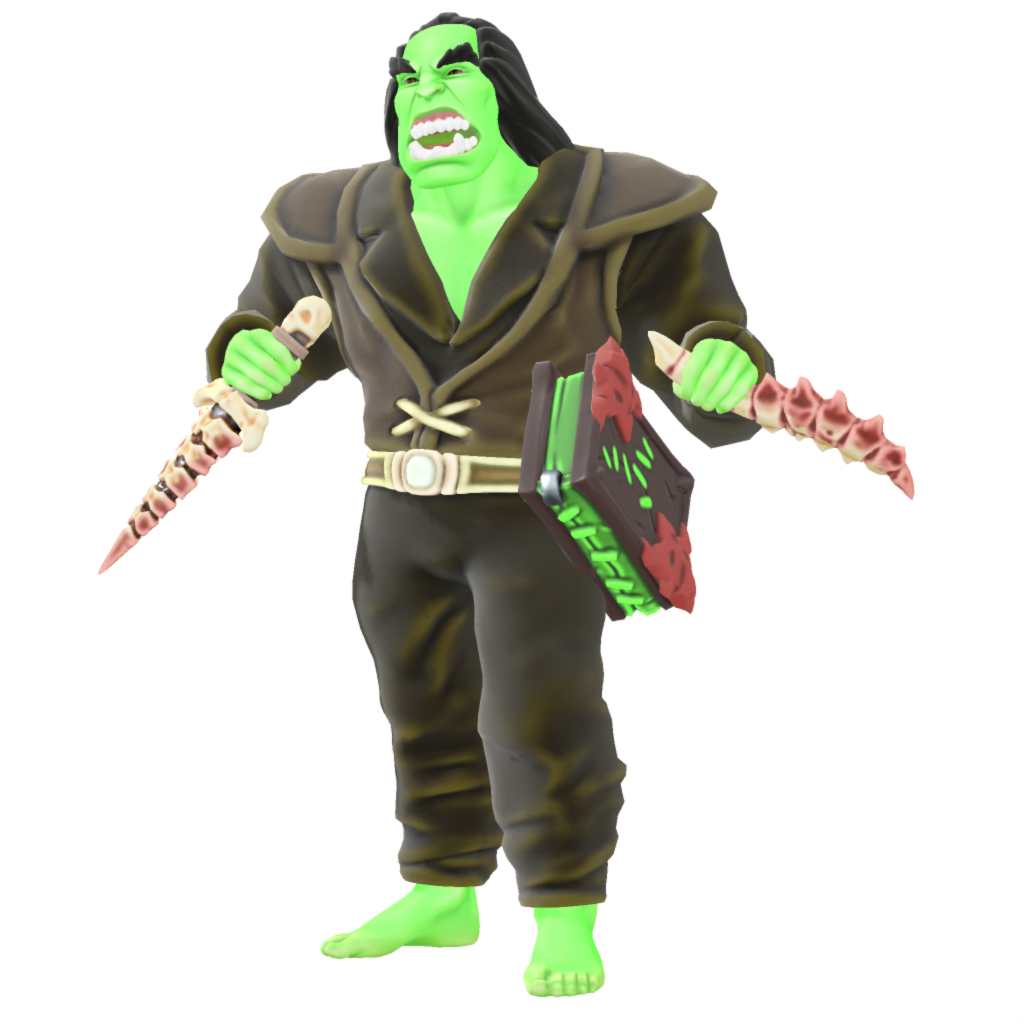 Zak the Miscreant by Jarhed
He said that any warrior in the world who believed they could take him could come there. Adventuring parties and groups of fighters were encouraged to work together. He even gave the exact location where he would be waiting, at the highest peak of the city, as well as the date they should all meet there. Until then, his soldiers would be guarding the city to prevent intruders from cheating, but on that day his men would leave the city. It would be Zak versus everyone.

The day came, and Zak did as promised. He met the challengers alone in the city. From atop the highest point, he watched as they all entered the city and began making their way through its various traps and mazes to get to him.   But he had no intention of fighting them. He would pull his most mischievous murder yet in Boldon, for he performed a spell with his Soul Magic. A curse of sorts, shot into the air from the highest point in the city, spreading to its farthest reaches. The largest range of his magic, as he had tested for years prior.
Immediately, everyone in the city was killed, their souls leaving their bodies to roam Boldon forver. But that was not the end of his curse. That would be too easy. Instead, he cursed it so that anyone who died in Boldon would not go to Heaven, Hell, the Void, or anywhere else. Instead, they would become a Ghost and stay in Boldon for eternity.   Some people travel to Boldon to overcome its traps, mazes, and various spectres that haunt the streets. Someone managed to travel there and recover the Book of Souls. Others go there for a place to die, wishing to live forever on Totania. It is common for old Kenku, who do not have long to live, to travel to Boldon to gain eternal life as a Ghost.   Boldon now serves as a literal ghost town, a city populated by no one but Ghosts.

Ghosts are not the simplest of creatures, as they do not have a body, nor do they take up any physical space. One could walk through a ghost, and those with little sense for magic may not even realize it.   These are the most simple properties of a Ghost. They are created via a curse of Soul Magic, bound to a singular location unless transported by Soul Magic itself to another location or stored within the Book of Souls.   They are described to be wispy people that seem nearly transparent, but their general shape can be seen. Those with major marks of Soul Magic, most notably any spirit held within the Book of Souls, takes on a bright green tint. Other souls may take on this color, or may have a white glow. Some other colors have been noted, but the stories are laced with speculation and doubt. 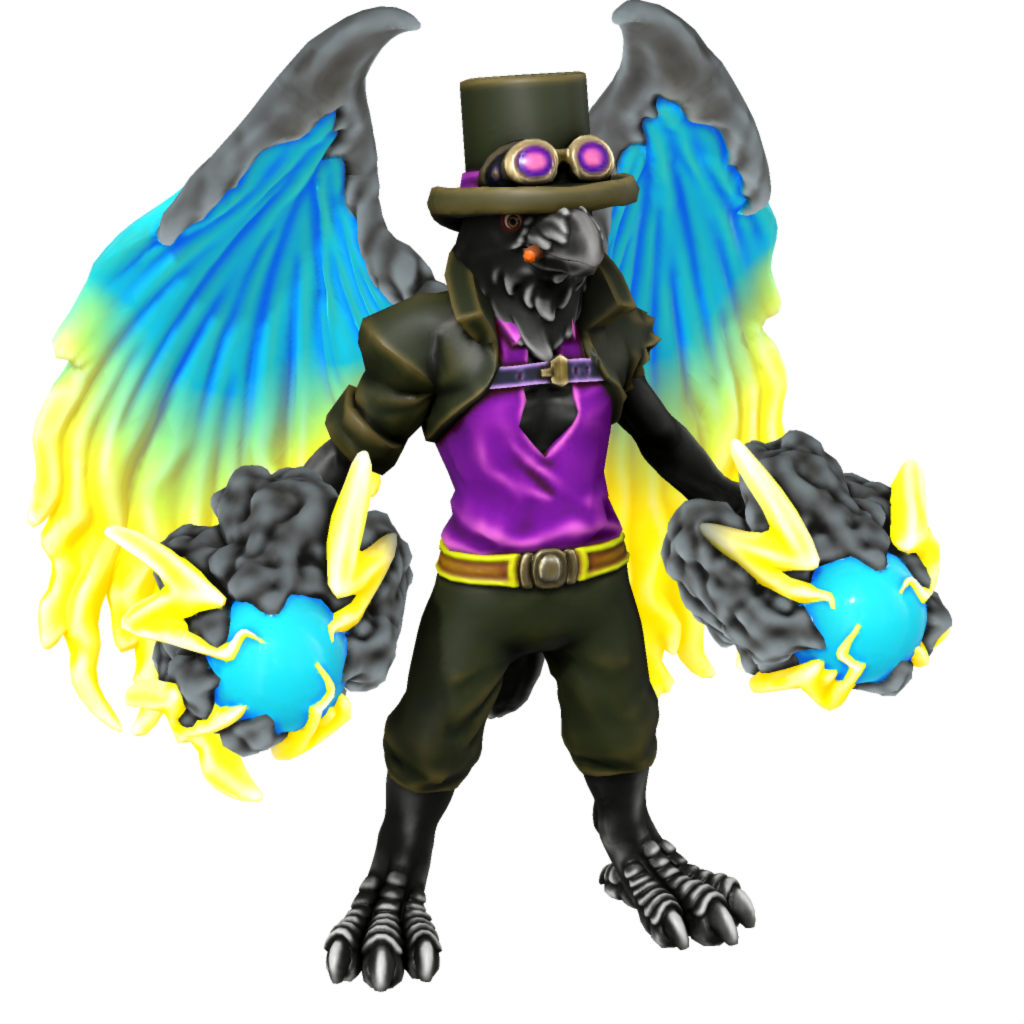 Rider by Jarhed
Other basic properties of ghosts stem from this incorporeal nature of theirs. Due to not having a body, they cannot interact with things in the world. They are able to walk through walls, objects, and even living creatures. They can float and cannot be damaged by anyone but a Soul Mage (or a Copy Mage who has gained control of Souls).   Those with a strong enough willpower to manifest it, and the magical power to back up that willpower, are able to break this rule. They are able to interact with the world and even attack people. However, this also leaves them vulnerable when they do so. People can dispel them if they have manifested, so many Ghosts do not do this even if they can.

The Exception of Exceptional Willpower

There is one other way a Ghost can manifest in Totania, aside from being created by a Soul Mage, though this way seems to only be temporary. In times of great duress, the loved ones of a dead person can summon their ghost with enough willpower. Be it happiness, rage, grief, love, or a feeling during an intense battle, these can manifest a Ghost beside someone to aid them or, in some cases, further fuel these emotions.   One known example is that it is said in Yirthum that the Kenku known as Rider, who had previously fought the Elf Kruxis before dying to Fepar Tilrak, appeared beside Nalrik Tilrak, Rider's good friend, to assist him in battle. He did not actually fight, as he was a Ghost, but Rider simply being there was enough aid for Nalrik.

Necromancers have tried for hundreds of years to make Ghosts without the use of Soul Magic. They believe that it is possible through necromancy, and even say that they would be able to bring someone back as a form even greater than a Ghost if they could just unlock what they call "The Ghost Key."   The Ghost Key is the ultimate goal of most modern necromancers, to understand what a Ghost is and how to make one. However, this phrase is also used by detractors to say that it is the Ghost Key because it is unreachable, incorporeal, or straight up impossible. Nevertheless, necromancers persist.   Some necromancers have claimed to have made Ghosts, but have either used Soul Magic or have instead made a Wraith.

Wraiths are failed Ghosts, a creation of necromancy misinterpreting a Ghost. They retain the whispy form of Ghosts, but often are malevolent spirits that are given actual bodies that simply appear wispy like a Ghost.   These Wraiths are allowed to roam free, and while they are not immensely powerful, they can attack anyone they please. For this, Wraiths are dangerous, as they can disguise themselves as a normal, harmless Ghost before preying on unsuspecting people.

As Ghosts are the creation of Soul Magic, an Item magic created by the Holy God Vecna, they are technically Holy. This means there are two major ways to dispel a Ghost.

The first is with direct Holy Power. Head Priests of various religions have the power to bless an area and free it from spirits. This has somehow not worked on Boldon, but for areas with a small presence of spirits, it works. The blessing will often include a prayer, the chanelling of the power of that specific God, as well as the swinging of some sort of ceremonial, Holy Weapon.   For some Churches, this is an enchanted weapon. For others it is a Mightem that holds the Holy Might of a God within it. For others, it could even be Item Magic itself that could dispel the Ghost. Accounts vary, and Magical Scholars say they may all be right.

The other is Demonic Powers, the direct counters of Holy Powers. With the power of Demons, one would even be able to fist fight the most incorporeal of Ghosts. This is believed to even extend to Demonic creatures like Vampires.   This leads to a story many tell, of an epic clash between an Evil Vampire and a Just Ghost who was cursed to eternal life. In the tale, the fight lasted over fifty years before ending one they were separated by a large attack that the other did, and realized that they could live away from the other forever and not worry about anyone getting in their ways.
Magic