Word of advice, friend - don't call it Ibza Xüfonz in these parts, or South Xüfonz, or Upper Xüfonz, or any of that. Most of us understand why you'd use the term, but tread carefully. There are quite of a few who will take high offence to it.
You can call the other one Pris Xüfonz though, that's what the Grand Prince does.
— Ibza Xüfonz citizen

Ibza Xüfonz, officially the Principality of Xüfonz, is a monarchy in central Thurásin. It was founded as a consequence of the Central War, but only took its modern form in the year 71 Discovery with the end of the Xüfonz War between it and the north-western rival state of Pris Xüfonz.

For centuries, the shores of Lake Strelish have been home to multiple small states, often fighting over access to ports. Despite the regular conflict, it was often only chaotic on the border territories, and some exchanges were so common as to be ritualistic and mundane.   This loose collection of countries was thrust into turmoil during the Central War, when the strongest power in the region, the down-river Ozäxa-Lavüdh, began fighting its further down-river neighbours. Many of the central states found themselves torn in who to support, causing fighting to break out between rivals and long-time allies who found themselves supporting different powers. Among these were a handful of states on the north-eastern bank of Lake Strelish, who haphazardly supported Ozäxa-Lavüdh and formed a union in order to more effectively defend themselves.   While intended as a temporary measure for a short war, the Central War would end up lasting 46 bloody years, and each one that passed cemented the union further. By war's end, Ozäxa-Lavüdh had come out victorious, and its allies throughout Thurásin soon reaped the rewards. For the north-eastern coalition, they formally merged into a single country - The Principality of Xüfonz, with its first leader being an Ozäxa-Lavüdhayo prince who had married a local reigning Duchess.   The Principality thrived for many years, weathering The Collision and the changes it brought to Lake Strelish, as well as maintaining its strong relationship with Ozäxa-Lavüdh. While it had difficulties, as all countries do, it was able to make it through them all stronger, or so it was assumed. In reality, divisions had started to show in Xüfonz by the Era of Discovery, 2 and a half centuries after its formation. The north-west, which shared a border with Ozäxa-Lavüdh was given access to a small port on the River Tsädh that could carry cargo all the way to the sea, abruptly catapulting the region into wealth and international notice, while the lakeside south-east was forced to send goods overland to that port due to the high waterfalls. While not a dramatic economic imbalance, the feeling that the north-west was considered superior was confirmed in the eyes of many when Grand Prince Ünivis II relocated the capital from the southern Skrezosh to that river port of Saxayodh.   These divisions were confirmed following the sudden death of Grand Prince Ozoken V in 55 Discovery. While this would not ordinarily be an issue, his succession was unclear. This was due to his tumultuous marriage and later divorce to Grand Princess Chörri, a few years after the birth of their son Prince Vaiken. Historically, such divorces often resulted in the children being disinherited. No such declaration had been made in regards to Vaiken, and his relationship to his father had been publicly kind and loving. The existence of another heir in Prince Üchla, the eldest son of his second wife Grand Princess Loi-lii, further complicated matters.   While both boys were far too young to contest the throne, their mothers argued on their behalf. Üchla's claim was heavily supported in Saxayodh, while the nobles in Skrezosh supported Vaiken. Loi-lii's assumption of the regency further infuriated southerners, as she was an Ozäxa-Lavüdhayo noblewoman, not a Xüfonzayo local. Conflict officially erupted in 58 Discovery, plunging Xüfonz into civil war.   The Xüfonz War lasted 13 years, with each side continuing to claim to support the rightful Prince of Xüfonz. Loi-lii's assassination in 61 Discovery gave Vaiken's supporters a brief edge, though they were soon battered back by Üchla's supporters seeking vengeance for the Grand Princess. Ozäxa-Lavüdh and other lakeside neighbours tried and failed to stop the conflict and find a solution both sides would agree to, eventually forcing a peace treaty in 71 Discovery that set up an international border between the two which would be monitored first by a coalition of independent states, and later by the two Xüfonz states.   As both states still claimed to be the true Xüfonz, the ceasefire also arranged for both to take new flags "temporarily" to ensure no confusion. Efforts were made to encourage both to adopt changes to their names to further distinguish them, but all suggestions were shot down. Despite this, the names Ibza Xüfonz and Pris Xüfonz (supporters of Vaiken and Üchla respectively) passed into common parlance outside of the countries. 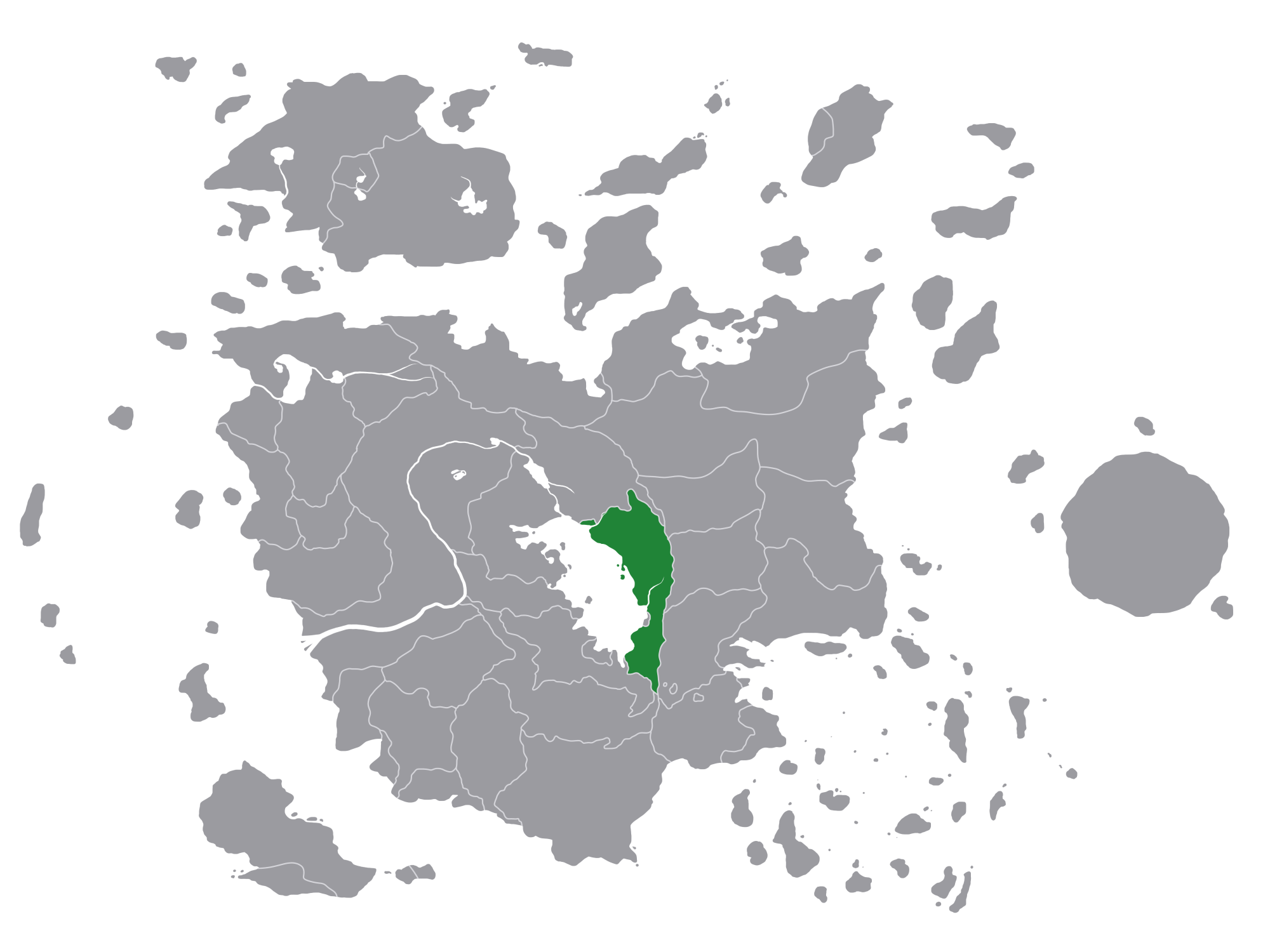 Ibza Xüfonz is an absolute monarchy, with its succession based on absolute primogeniture - the most senior child claims the throne. The Grand Prince/ss then delegates large swaths of power to their many dukes and counts, while reserving the final word on any decision made. Any matters of foreign policy must come before the Grand Prince/ss or their regents. Regents are typically selected from close allies or family, such as spouses or parents, and in rare cases the current ruler's children.

A Number of Problems

While a minor issue in the grand scheme of things, the numbers used for the Grand Princes/ses of the two Xüfonz states still poses a few problems. After all, both states consider themselves to the legitimate successor to the unified Principality of Xüfonz, and continuing the numeration of their monarchs accordingly. To date, there has only been one duplicate - Ozoken VI, whose reigns overlapped significantly.
For those most concerned with keeping track, the Ozoken of Pris Xüfonz is considered VI, while the Ozoken of Ibza Xüfonz is considered VII, purely based on who became Grand Prince first. Ibza Xüfonz naturally disputes this decision, and its Grand Princes have tried multiple times to have an Ozoken VII on the throne to 'prove' the VI's legitimacy. Due to a variety of events, this has not happened.

The flag of Ibza Xüfonz consists of a black field with a white inverted isosceles triangle. The field also contains two bands of blue, which start at the bottom tip of the triangle and diverge outwards. In the centre of the triangle is the charge of a gold 8-pointed star.   The Ibza Xüfonz flag draws heavily from the previous Xüfonz flag, with the gold star standing in for the original 8 sun rays. The blue is also from the original flag, representing Lake Strelish. The black and white are new additions, with the former representing the soil of Xüfonz's highland regions, and the latter their hope for a unified Xüfonz in the future. 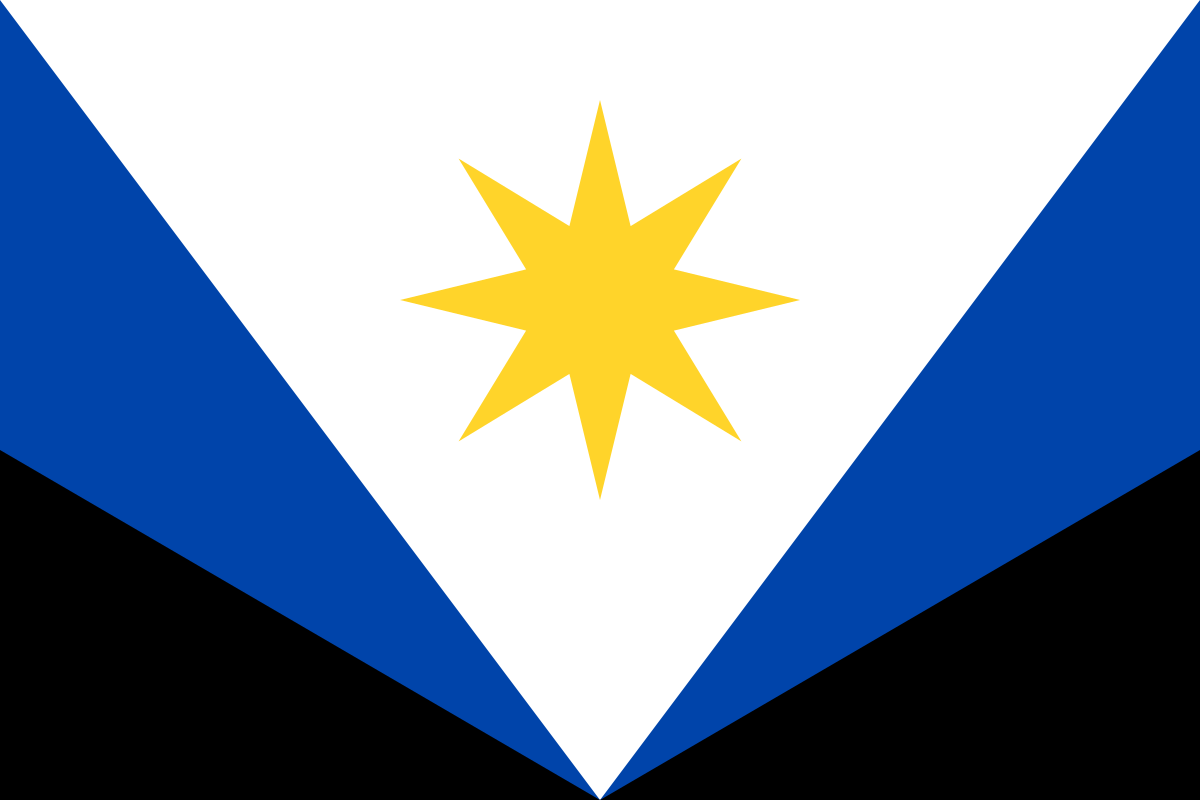 The current Grand Prince of Ibza Xüfonz, and infamous authoritarian