After a whole 200 years being separate places, if the Grandies said tomorrow that they were gonna reunite, I'd call 'em absolute fools. We should just accept we aren't the same country anymore and move on.
— Pris Xüfonzayo citizen

Pris Xüfonz, officially the Sworn Principality of Xüfonz, is an elective monarchy in central Thurásin. While it claims to be a direct continuation of the Principality of Xüfonz founded in 5 Reconciliation, its modern form only came into being in 71 Discovery at the end of the Xüfonz War with its south-eastern rival, Ibza Xüfonz.

The mountainous north-eastern shore of Lake Strelish spent many centuries as a melting pot of small rival countries, arguing over their borders to secure more control of the all-important lake. With the breakout of the Central War between Ozäxa-Lavüdh and its neighbours down-river, many of the Strelish countries were forced to pick sides to ensure their access to trade. In this extended chaos, a collection of states allied with Ozäxa-Lavüdh formed a temporary union to better protect themselves from local rivals.
When the Central War ended 46 years after it began, the constituents of the union decided to remain together and officially become a single principality, the Principality of Xüfonz, in 5 Reconciliation. Its first Grand Prince was an Ozäxa-Lavüdhayo prince, who married a local reigning duchess. Xüfonz reaped further rewards from its down-river neighbour, soon becoming one of the most prosperous countries in central Thurásin.
Its prosperity belied growing divisions in the country, with the starkest differences being between the north-west and south-east. As the country expanded its trade network, Ozäxa-Lavüdh granted it the port town of Saxayodh on the banks of the River Tsädh which, unlike its lakeside ports, was capable of sailing directly to the southern oceans. With this access, the north-west grew richer and more well known, while the south-east lagged behind. The sense that the north-west was considered superior was confirmed for many southerners when Grand Prince Ünivis II moved the capital from the lakeside Skrezosh to Saxayodh.
Tensions truly erupted after the sudden death of Ozoken V in 55 Discovery with an unclear succession of young boys. The south sided with his eldest son Vaiken, who was his only child with his ex-wife Chörri, while the north sided with the next oldest Üchla, his first child with his widow, Loi-lii. After a few uncertain years under Loi-lii's regency, war began in 58 Discovery. Her assassination in 61 Discovery infuriated other countries, notably Ozäxa-Lavüdh, who formally announced support for Prince Üchla a few months later.
The Xüfonz War came to an end in 71 Discovery, with an international border between the two parties administered by a handful of their neutral lake neighbours. While both parties claimed to be the legitimate government of Xüfonz, they were encouraged to adopt new flags and take names that would differentiate them. Only the former was carried out at the time.
Near the end of the reign of Grand Prince Üchla X, the northern Xüfonz principality was declared to now be an elective monarchy, with a minor accompanying name change - The Sworn Principality of Xüfonz. Despite this name change, the two Xüfonz principalities are not usually distinguished by whether they are 'sworn' or not. Instead, north Xüfonz is commonly referred to as Pris or Lower Xüfonz, a title that is becoming increasingly common among its populace.

Pris Xüfonz is an elective principality, with the Grand Prince/ss elected by a combination of noble and peasant representatives who sit on the Princely Council. Once elected, each Grand Prince/ss rules for life. While the individual elected is often related to the previous ruler, this is not always the case. The Grand Prince/ss then delegates power to various nobles, as is common in monarchy. 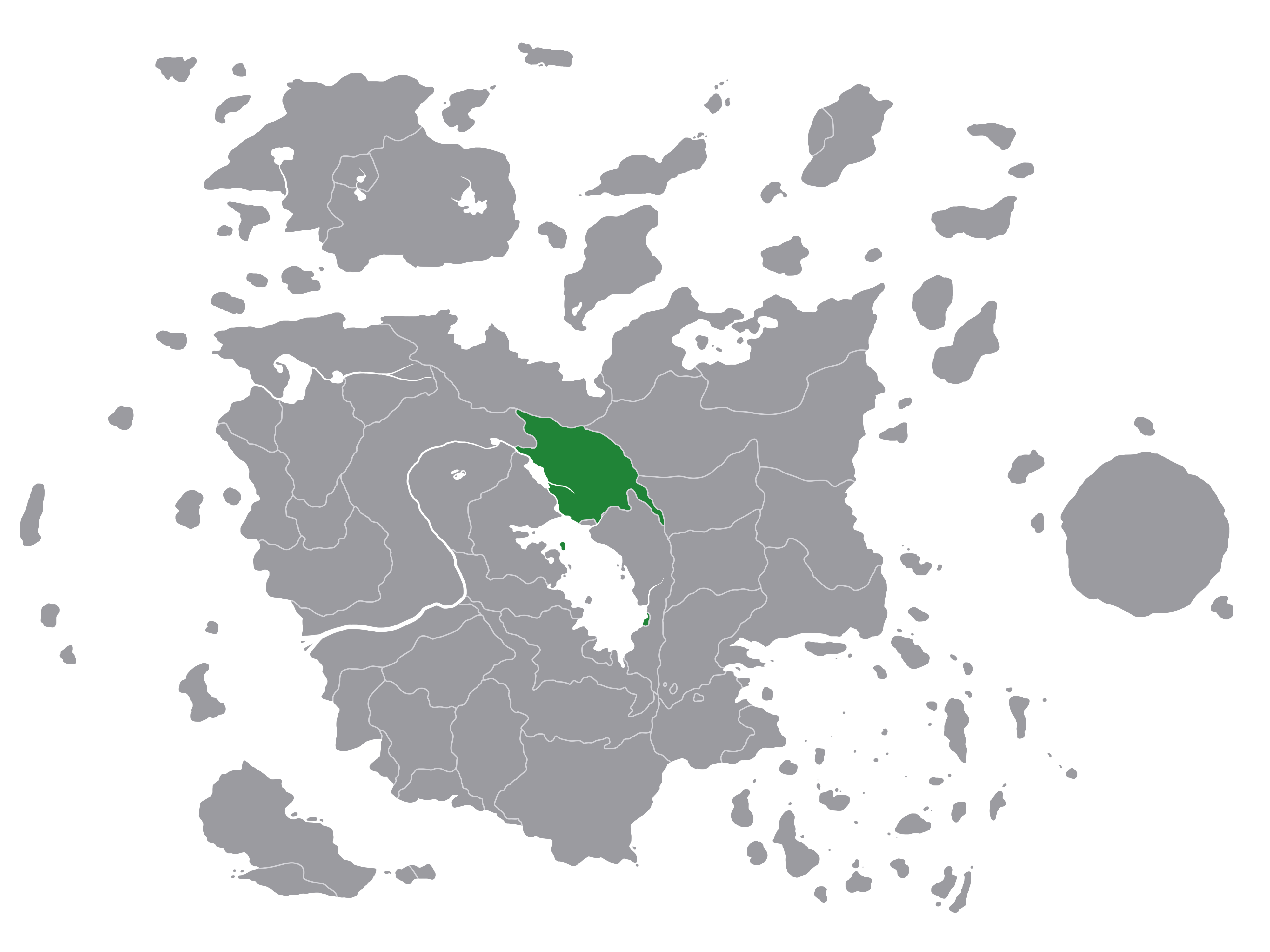 While divorce was uncommon among the Xüfonzayo monarchs, it did still occur. Typically, all children from these marriages would be disinherited, especially if the divorce was founded on accusations of cheating. The sole exception to this rule was future Grand Prince Ünivis I, who was initially disinherited after the divorce of his parents, but was later reinstated after his mother, Grand Princess Zdärrvis II, failed to have any other children.
It was on this historical basis that the north sided with Prince Üchla, assuming that Prince Vaiken had been disinherited. No proclamation of such was ever made, however, and the young boy had a good relationship with his father, as far as the public knew. It's assumed Ozoken V planned to spell out his succession plans, but his unforeseeable death meant he did not have the chance.

The flag of Pris Xüfonz is a black field with a white fess taking up a third of the flags height. The charge is a repeating blue knot which extends the length of the flag inside the fess.
The colours of the flag strongly echo those of Ozäxa-Lavüdh, and while they were probably borrowed directly from Xüfonz's neighbour, they do not have the same meanings. The black represents the soil and mountains that much of the country occupies, the blue represents Lake Strelish and the River Tsädh that they rely upon for trade, and white represents the hope for a peaceful future. The knot symbol represents the unity of the people of Xüfonz, including those in Ibza Xüfonz, and how the river and lake tie them all together. 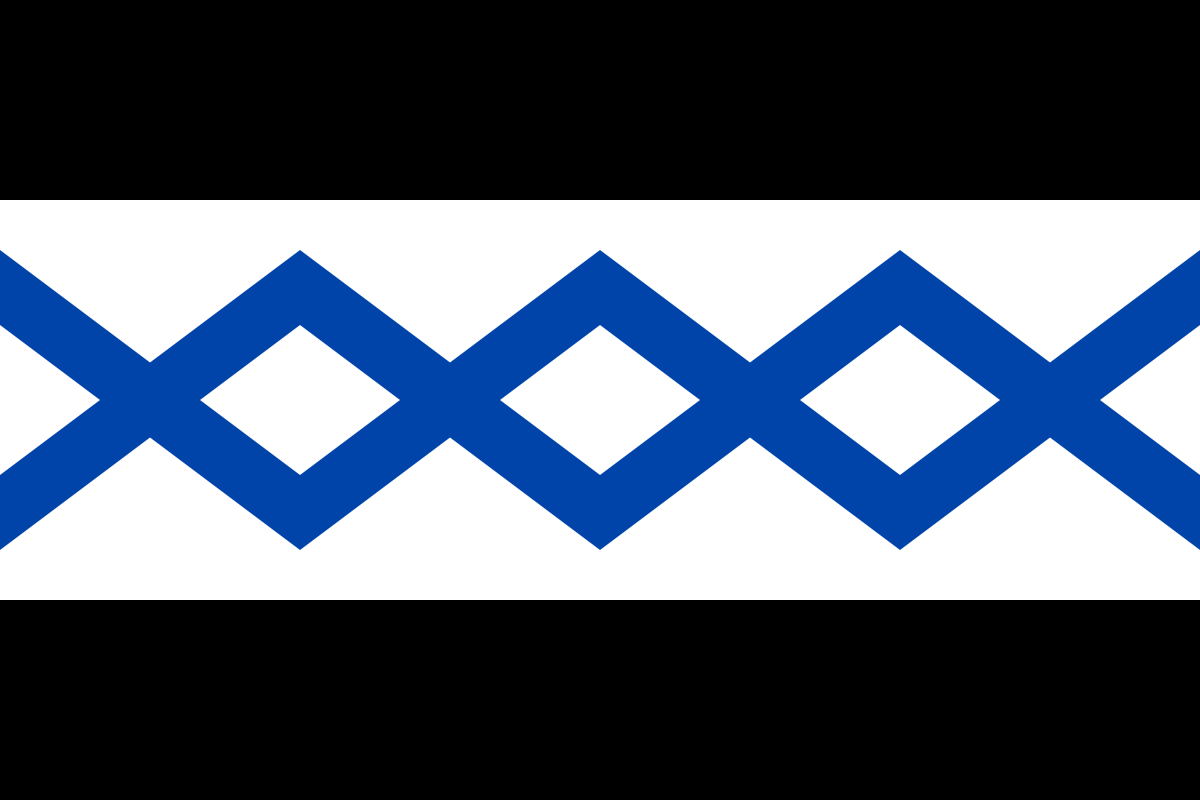