Ozäxa-Lavüdh, officially the Joint Royal Domain of Ozäxa-Lavüdh, is a diarchy in central Thurásin. Established in 34 Conquest by diarchs Därra and Saxavis in response to the expanding Nyikkishep empire, the country has endured more than a millennia of conflict and chaos. Today, it is considered one of the great powers of Thurásin.

Ozäxa-Lavüdh's history begins long before 34 Conquest, having been formed from the union of two pre-existing kingdoms - The Kingdom of Ozäxa and the Kingdom of Lavüdh. These two kingdoms were some of the many countries and groups who clustered around the River Tsädh, which provided a lush oasis from the sheltered and dry plains. Control of this river was the dominant factor in local politics, and Ozäxa and Lavüdh were notorious for constantly being at war and changing their borders to engulf both banks.   This began to change upon the arrival of the Nyikkishep empire in their southern reaches, controlling the lower part of the river. While the two kingdoms were only initially scared of invasion, the Nyikkishep later prevented any of their sovereign ships from sailing down river to the ocean, potentially destroying trade.   To avoid this, the two kingdoms sought a truce and alliance, hoping that together they could convince the invaders to change their law. This failed, and subsequent discussions between the rulers of the kingdoms determined the best solution would be to truly and completely unite their domains, so that the empire could not take advantage of their division. That neither of their heirs could bear children together was initially a sticking point, but soon an arrangement was made.   In 34 Conquest, Därra of Ozäxa and Saxavis of Lavüdh were married, and crowned as the diarchs of a united Ozäxa-Lavüdh. Each queen took her own consorts, and their children would ascend to the throne as part of the diarchy, until such time their lines could merge officially and to their families' satisfaction.   While Ozäxa-Lavüdh was still unable to force its way down river, it turned instead to building better relationships with its neighbours further up river and inland, allowing it to offset the damage of the imperial blockade. These connections aided it during the plague which struck 30 years after its formation. When sickness had left the land, the empire tentatively returned access of the river to the diarchy, allowing their trade and diplomacy to flourish. When the empire fell into civil war to start the Era of Collapse, Ozäxa-Lavüdh successfully restored a pre-imperial kingdom down river to its former size and status, and supported the other independence movements which turned the empire to dust. By the time the empire was no more, Ozäxa-Lavüdh has established itself as a key player in central Thurásin politics.   The diarchy stayed peaceful for nearly 300 years after the collapse of the empire, until its relationship with its coastal neighbours soured, sparking the devastating 45 year long Central War. While Ozäxa-Lavüdh was ultimately victorious, claiming swaths of land along the river bank and even a coastal port city, the diarchy did not recover from the loss of citizens, resources, or diplomatic goodwill for many decades.   When The Collision occurred, Ozäxa-Lavüdh was fairly unscathed. What it lost in major towns and strange flooding, it gained in the arrival of many elves, who quickly became an integral part of the country's culture. With their influence, Ozäxa-Lavüdh has remained peaceful for the last 400 years. 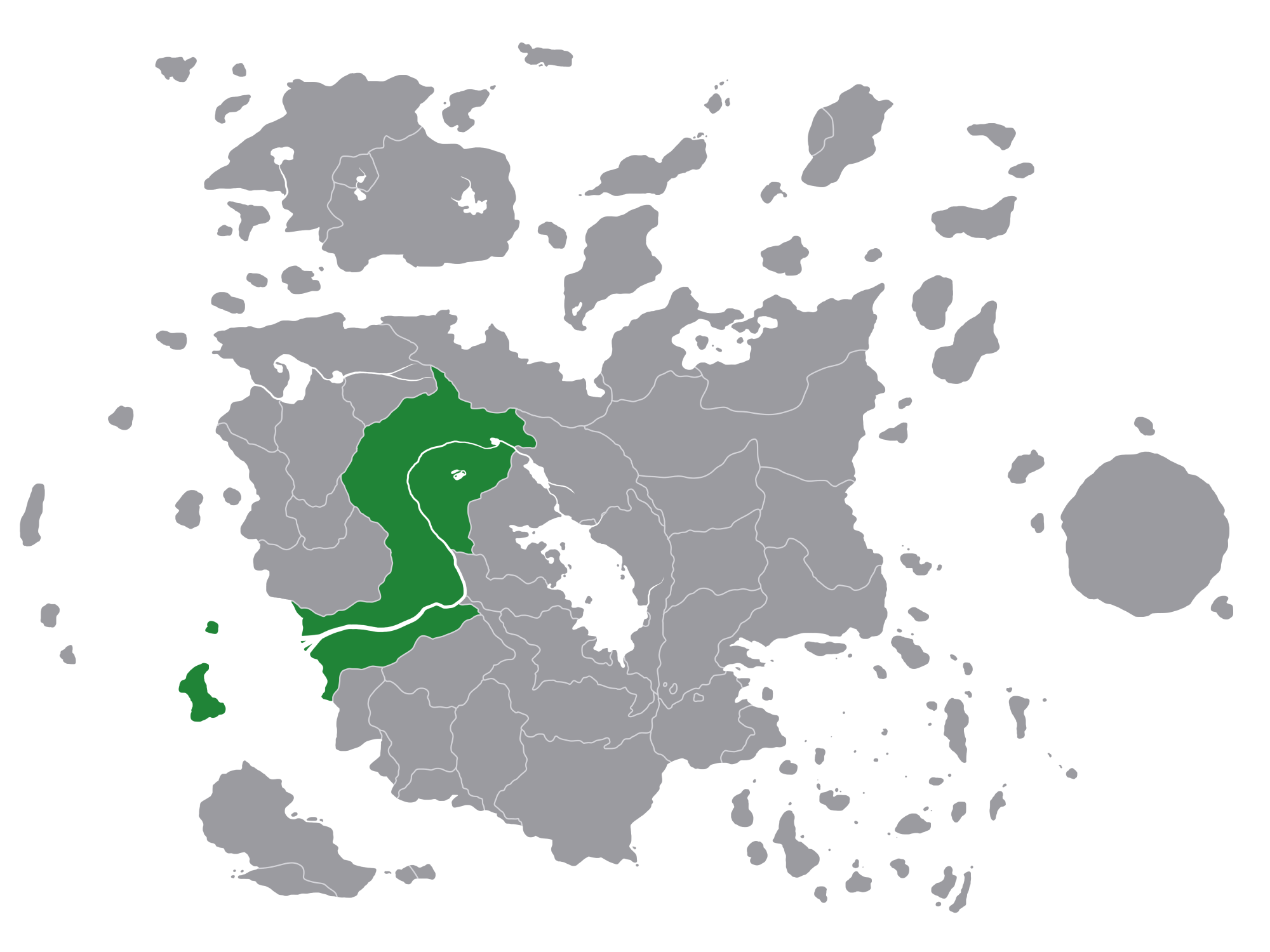 Ozäxa-Lavüdh is a complicated beast, described as a constitutional federal diarchy. At the top of the country are its two Üüstraz, currently Därra XIII and Vaiken IV. Both are constitutionally equal in power, and keep the two principalities of Ozäxa and Lavüdh together. Each principality is ruled nominally by one of the diarchs heirs, alternating which family holds which principality whenever possible.   In practice, the country is mostly run by a small council of nobles, one from each major family. The number of members varies, due to problems within families, as well as regular checks by the Üüstraz that the families present on the council are representative of the country. The Üüstraz and council work together in a delicate balance to ensure stability, which seems to have worked. 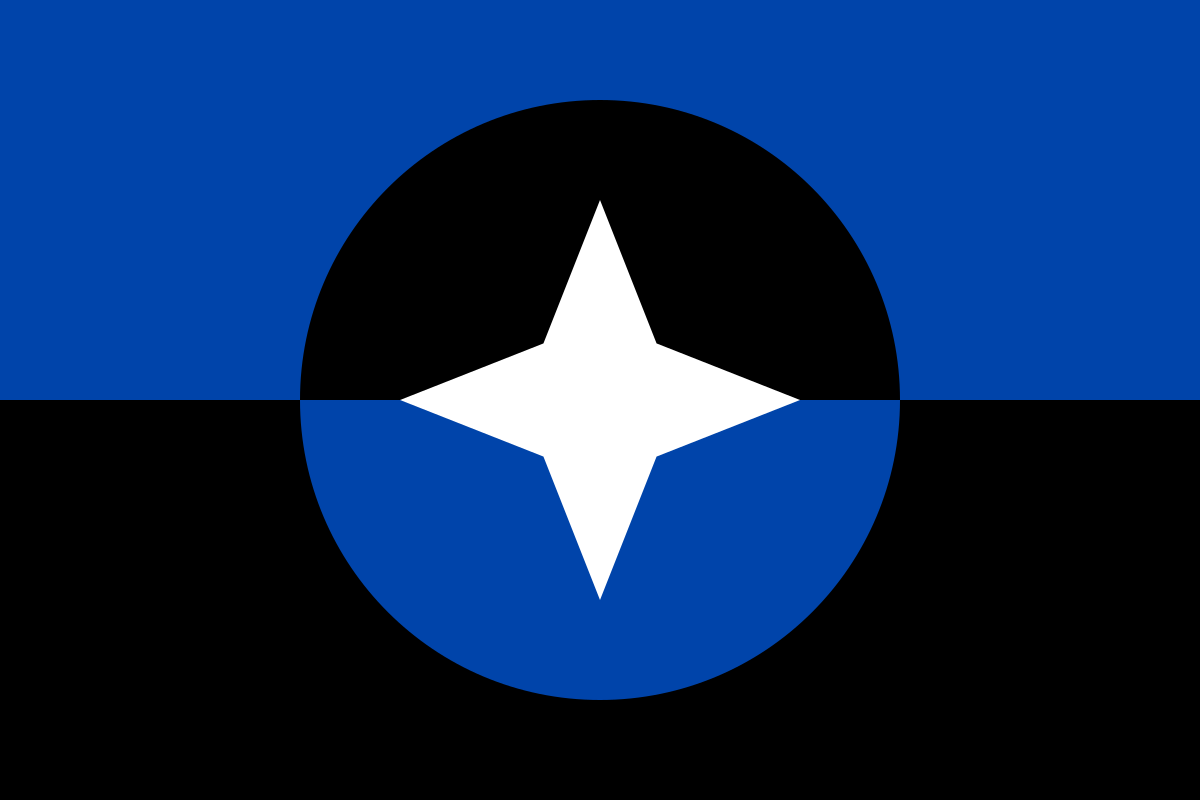 When Därra and Saxavis were wed in 34 Conquest, it was intended as a temporary measure to ensure the unity of their families despite their inability to have children together. The hope of each queen was that their children would be able to marry and have kids, uniting their lines and turning Ozäxa-Lavüdh into a standard monarchy.   A suitable pairing of diarchs did not arise until 27 Peace, 207 years after the union began. By this time, the system of diarchy, and of not merging the family lines, had become so familiar that they did not dare break with tradition.

The flag of Ozäxa-Lavüdh consists of two horizontal stripes of equal width, the upper one blue and the lower one black. At the centre of the flag is a circle split into halves, with the upper half being black and the lower blue. The charge is a white 4 pointed star.   The black represents Ozäxa, specifically its 'dark valley' oasis south of the river which was its historic seat of power. The blue represents the mountains of Lavüdh. The two colours being flipped in the central circle represent the marriage of Därra of Ozäxa and Saxavis of Lavüdh, and the 'exchange of power' which took place in the country's union. The white star represents the river upon which the diarchy relies, as well as the balance Ozäxa-Lavüdh wants to uphold.

A major city in southern Ozäxa-Lavüdh, and former capital of Zdärrözadh