Or'Rash is the mountaintop home city of the Dragonborn and is located in the far northeast reaches of Theria, nestled in the Hazaan Mountains.   Many rope bridges are used to get from peak to peak and outsiders are discouraged from attempting to gain access unless they have good reason.   The harsh environment around Or'Rash guarantees that only the strong survive and this has been a staple of the Dragonborn culture.

Or'Rash is the home of the red Dragonborn and every one who lives there is expected to contribute to the society in some form.

The Dragonborn follow the only the strongest warriors. When a leader dies, a successor is chosen by combat and must defend their throne for a week against all who would try to unseat them.   Leadership has changed hands many times in the recent past, with Hesskin ruling for over two decades before his death. Following Hesskin's death, Karrik led the Dragonborn into battle with the Overdale/Overwatch where he was killed as well. In the aftermath, Kava Truvor and her crew were in charge briefly until they were ejected from the city.

The Hazaan Mountains are home to red dragons, which keep the area clear of most other predators. 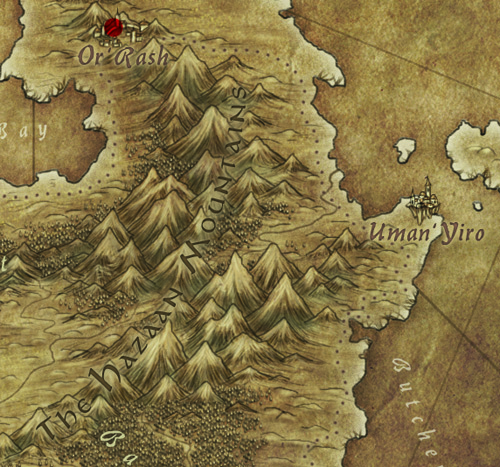