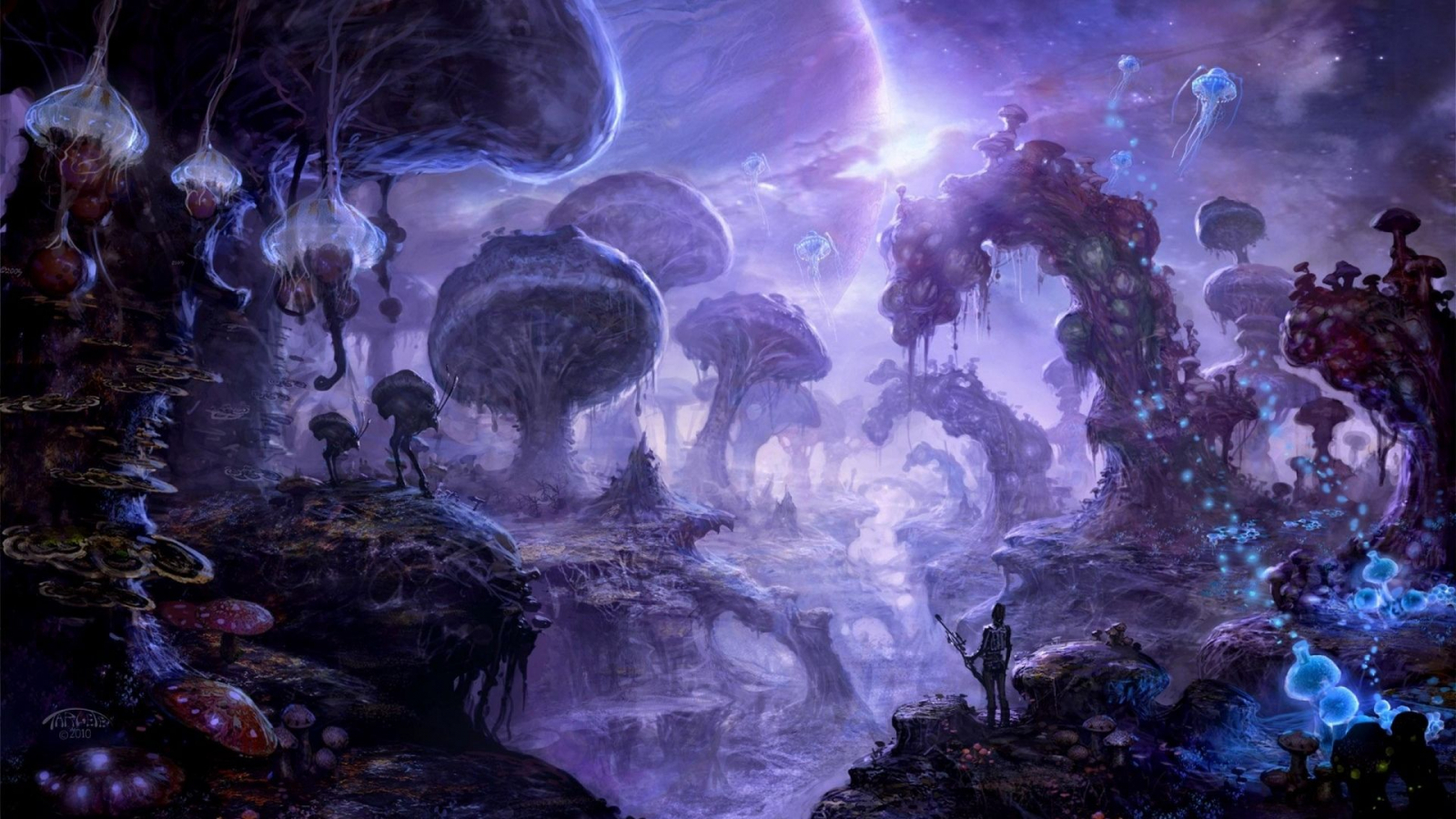 I jumped as something seemed to materialize out of mushroom. A strange human-like creature with skin, the color of mushrooms and a tail that looked like someone had stretched its flesh slowly approached me: a mushroom goblin.
-An Araborean explores account of an encounter with Araborean goblins


Araborian goblins are the goblins of Araborea. They have adapted to the world, and lived there since it was created. They have developed strange warps, and are sometimes called warped goblins. Every year on Hunger Day , the god, qwalor, eat half of them, which is a major reason why they have not spread over araborea.

We crept through the fungal underbrush, energy rifles in hand, towards the cliff's edge. Below they could see a scattered group of squat figures. They milled around the clearing, hissing at each other, I let Henst take the first shot.
— Araborea Vet.

The mold-encrusted inhabitants of the Araborea's middle islands. Twisted reflection of goblins in other worlds, these creature are deeply corrupted by centuries of The Darkness's influance. They live

Normal Araborian golblins are humaniod. They are 4-5 feet tall. However, most Araborian goblins aren't normal. Living in Araborea slowly warps creatures, and they have been here since it was created. Many have strange traits, which are carryed down throught generations, and mark certain familys. theese strange traits incluce, wierdly sized body parts, tails, extra limbs, and almost everything imaginable. The goblins have come to regaurd them from nutral to a blessing, depending on the usefullness of the warp.

They maturer by the age of 8. Throughout it's life it is slowly warped. The goblins have developed some resistance to the warps, but they live there all there lives, so they still apuire them with time.

They live best in The inner circle of araborea, where they have learned which mushrooms are edible, and adamted to eat some that are just boarderline unedible.

They live mostly on mushrooms, and store them throughout the year, in preperation for Hunger Day, where they leave it out to be devored by Qwalor, along with half there tribe.

They live in tribes of 200-300.  The tribe is lead by a leader, consled by a counsler, who does not get eaten by qwalor, and has expiriance. The consler is often one of the oldest goblins. Under the leader are 5 goblins, who carry out orders, and also get eaten by qualor.
After Hunger Day, the goblins that want to be the leaders go through a two phase compitition. Each goblin chooses 65 willing goblins to be part of there team. The first phase is where the goblins go into the wilds for a week. Then they come back and have a fight. In the rare event that the leader dies before hunger day, one of the five important goblins is appointed leader by the counsler. The goblin then appoints the a goblin to fill his previos place. If one of the five important goblins dies, a new one is appointed by the leader.

there face is almost like humans, with the exeption of whatever warps they have there.

They are less intellegent then humans, but still can make tools, store food, recognise a god, and have a social structure.

They have not been able to develop any new technology in since Araborea's fall into darkness, and what they did have was distroyed and forgotten then.

They have there own launguage.

They generally where few clothes, because hide is very hard to find in Araborea. The clothes they do have are often just loinclothes.

Every year they have Hunger Day. the goblins belive that if they do not, then qualor will still appear, and consume the entire tribe.

The goblins do not interact much. they try to creatures that have are both large and more numorus then them, or sometimes just large. Other creatures they leave alone or kill and eat, depending on if they are edible, and how hard they are to kill.
Lifespan
30 years
Average Height
4.5 feet
Average Weight
80 pounds
Body Tint, Colouring and Marking
The goblins are mottled purple, with some red, white, and a bit of green. This colouring lets them camoflague with the mushrooms so well that they are also called mustroom goblins.
Geographic Distribution