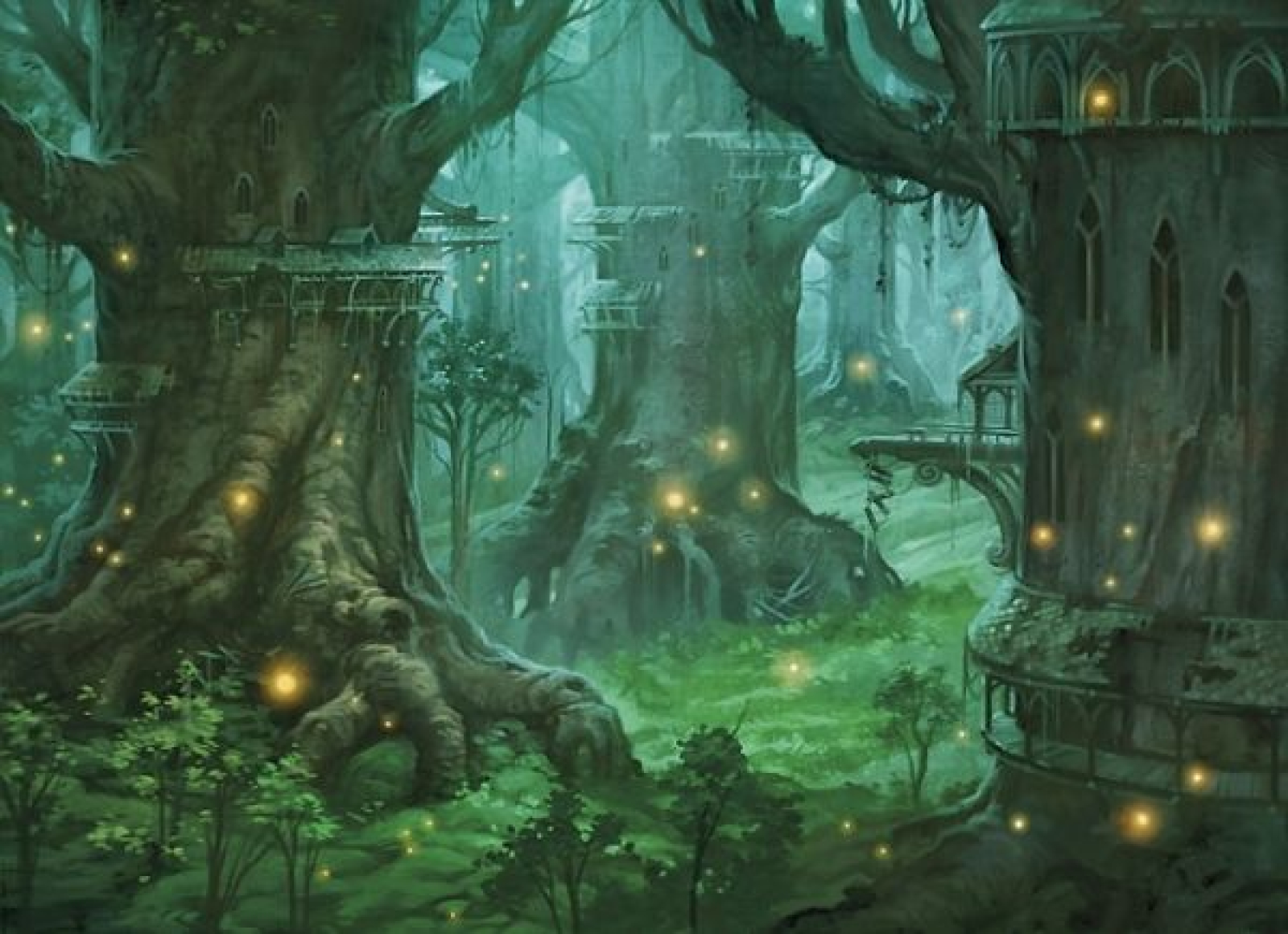 A beautiful race of warriors and mages, this people is noted for their preference for deep woodlands and forests

Elves worship the The Great Powers, and consider The Traveler to be their patron. The Elven priesthood congregates outdoors in glades with wood pillars carved to represent his different aspects.

Physically, Elves are anthropomorphic, with an average height of 5 feet 6 inches and slight builds. Elves have noticeably pointed ears. Their average life span is about eight times that of a human. They have less sexual dimorphism than humans, and a male to female ratio that is approximately equal.

There is only one physical population, with the differences between High Elves, Grey Elves, and Wood Elves being cultural.

Their physical maturation rate to young adulthood is similar to humans. Multiple births are almost unknown, and females have a refactory period of fifty years between pregancies.

Elves strongly prefer temperate woodlands to any other terrain.

Because of the low birth rates and the individualistic personalities, the basic social unit is the couple/immediate family (which usually does not include siblings).

The individualism of Elves manifests itself in Elvish political organization. Elvish settlements are freeholds, and Elvish government is a basic decentralized representative democracy. Representative bodies are usually some sort of Council of Elders for the appropriate area advised by a priest.

Elves do not really see themselves as under the authority of human nations, and hold only to their own councils. To Elves, it is rather absurd to pledge themselves to what they see as such short lived monarchs. Most major diplomatic incidents come from elves acting on cultural knowledge learned from their youth that is no longer remembered by the current humans in the area. This can be very confusing to feudal monarchist humans. Crisis leaders are appointed at the appropriate levels to deal with emergencies that require fast action.

They have the ability to see in very low light conditions.

Names are usually compound words that have some meaning to the parents at the time of the child's birth. See the Elvish to Romen Lexicon.

Women are treated as social equals to men.

Courtship rituals are elaborate, with familial arrangements, forced separation, and forced contact of the couple.

Parental respect is considered a virtue, along with a further respect for elders in general (However, with a possible life span approaching 800 years, the Elvish definition of “elder” can be very different than for humans ).

]Elven culture has achieved a late Medieval level of technology. Settlements are primarily agricultural, with small-scale agriculture, some livestock, and a significant amount of hunting and gathering for the level of technology. They are often surrounded by a grove of Starfuit Trees with Elf Berries planted under them.[/p

Livestock-wise Elves do not tend to have pasture animals in their forested environment. The exception being horses, which Elves have taken very well to. Chickens seem to be a ubiquitous livestock animal for all people and the Elves are no exception. Also they seem to have embraced pigs an animal native to Kementari. Finally, they also tend to have Elvish Dire Chickens nearby.

One Kementari crop the Elves have embraced is grapes. Elven wines are legendary amongs the other races as the highest quality wines around.

Elven cuisine often involves a truly astonishing amount of jam. So many of their crops are fruit trees or berries and are stored as preserves. The average Elf is likely an expert on the quality and preparation of jellies. Also, much of their meat is dried and/or smoked to preserve it.

Contrary to popular belief elves do not live in hollow trees... They build houses like everyone else. They do, however, tend to build them IN the trees, specifically in the canopy around the trunk.

Social maturation is longer than for humans. Elves tend to have long apprenticeships and bachelorhoods. The culture is marked by elaborate rituals, ceremonies, and traditions. Elvish culture tends to be conservative. Because of the low birth rate, children are often raised as only children, so most Elves tend to have independent personalities. This tendency combined with the Elvish love of ceremony has caused most social rewards and rituals to be based on individual achievement and self-actualization. These independent personalities are offset by the overall conservatism of the culture.

In 3900 B.C., the Elves fled to Kementari from Minyabar, after being driven from their homeland in Aelfheim by massive humanoid invasions.

According to their records, the Elves had a rough time after landing in Kementari . The Dwarves disembarked and immediately headed to unwanted mountaintops, and placated the local humans with masterwork items. As a result, they were welcomed with open arms. Elves however... not so much. Not all Humans, or even Halflings welcomed the newcomers claiming their forests. Elves generally were victorious in these skirmishes, but due to their long-lived and slow growing population each loss was felt far more heavily. There was some doubt if the exiles had escaped death from Tumo, only to die from slow attrition. The Dwarves however, came through… They repaid the debt that they owed the Elves for taking them across the portals from Berghiem to Kementari by brokering peace between the other races and the Elves.

Elves are a distant people, their long lifespans affecting their outlook. Elves by their nature tend to look at events far more objectively than the other races. This is often mistaken by members of other races as apathy or arrogance.

One thing most Humans do not really appreciate is that most Elves seen outside of their communities and among the Humans are still considered very young by the Elves. They go forth, travel, make friends, and then watch their friends grow old and die. After losing their youthful companions they often return to their forests, wanderlust quenched, and focus on making friends with those who have similar lifespans. This leaves Elves a fairly insular people that do not tend to take part in the local political landscape- preferring to ignore the rest of the world when possible.

Elves often trade with those around them, but relationships remain professional and true friendships between Elves and outsiders are rare.

Of all other races, they actually get along best with the Dwarves, not only because of they shared hardships of the exile, but because being a long lived, culturally slow changing people, dealing with Dwarves remains a familiar experience. It is not uncommon for a Dwarf speaking with Elves to respond to their father’s, or even grandfather’s name without comment. It is easy to see a few descendants as copies of their friends of youth.