Bitey was born under a blood moon, as auspicious starts go this was a doozey. His father was a pit-fighter on Daxu, bred for fighting and entertainment, his mother was a young impressionable Orc woman with a thing for bad boys. From this confluence of circumstance Bitey was born, the midwives remarking that even for an Orc birth it was traumatic with his mother dying of blood loss, again as signs go this was a bold one. Not particularly excelling at education except in physical education he dropped out as soon as he could fleeing a home of abuse and poverty living a life on the streets.   At the age of 15 he broke into the yard of a salvage company trying to find an old air-car to sleep in for the night, unfortunately he came across a pack of hounds that didn't take too kindly too him trespassing. In the attack that ensued he lost his left arm up past the elbow and a considerable amount of blood.   As he lay there screaming in pain in a pool of his own life force something clicked inside him about the pure aggression of the hound and the lesson he had just been taught, hurt someone badly enough, they'll never bother you again through fear.   And thus, Bitey-Howl was truly born.   His arm was replaced with a fairly decent cybernetic by the state, it also contained injectors to keep him supplied with a Rabies vaccine, an unfortunate side-effect of the bite. After he was well enough he returned to the yard in order to try and conquer his emotions over the ordeal, using the arm he was successful in putting down all the hounds. He took a grim token that day by taking the head of the hound that took his arm, fashioning the hounds face into a grotesque mask he could use for hiding his identity, as he carved the face up he made a dark pact with whispering gods.   Over the years he adapted the model to be able to accept other chemicals too, he can now use it to dose himself up with Rage-Stims before a fight to really help the blood flow.

Quite muscular even for an Orc and in good condition save for a cybernetic arm.

Cybernetic left arm with medicine dispensers dotted down it connected to the stump of his arm.

Can dispense rage medications from his cybernetic arm to boost his prowess in combat. Also if he is feeling particularly nasty can coat the blade in his blood, transmitting rabies through it.

Wears discrete amounts of plastic armour woven into his clothes.

Leader of The Rabid Hounds gang on Daxu specialising in fighting pits.

Fear of rabid dogs, if he suspects a dog is rabid, he puts it down himself.

Will not discuss his parents.

They say Bitey prays to the old gods, he cuts himself ritually and prays privately to one god in particular but he will not discuss it.

When you catch him on a good day he is as nice as you can expect, will always help out his gang-mates and has a soft spot for helping urchins. Conversely, if he gets mad, someone will die and it will be messy. 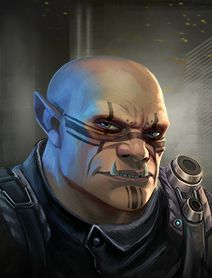